We’ve been waiting for months for the cabinets to be delivered. 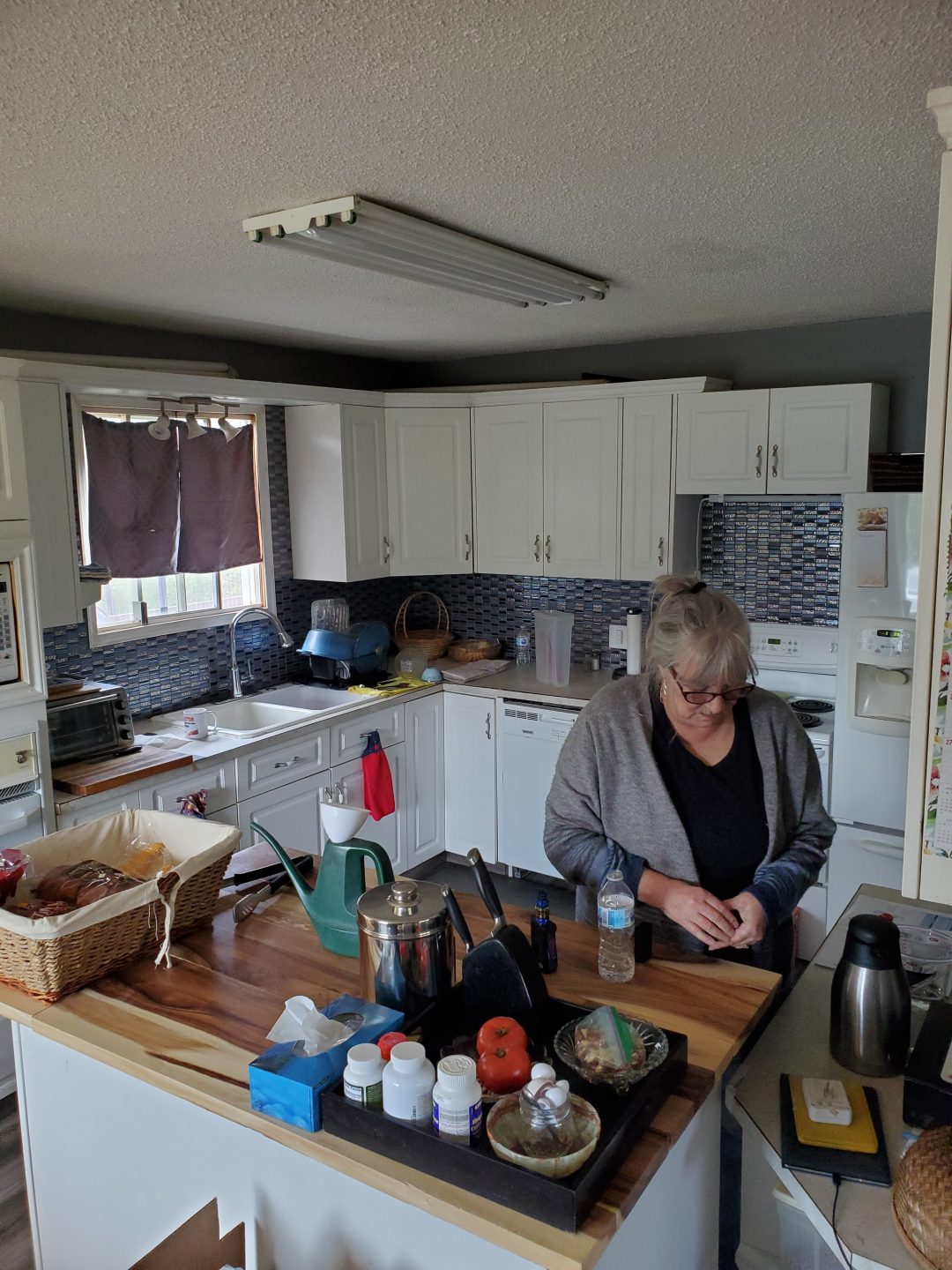 And that time has come!

We knew it would be sometime in October.  Got the call “get the kitchen ready”  Everything else gets put aside … Cause there’s work to be done and it’s a bummer not having a place to cook. So the quicker the better. The photo above was taken a week after moving in.. Therefore this is what we call a “base line”.  Almost immediately we moved the island from the middle of the kitchen to the place you see here. This worked better, and made sense to us..  So you will see that the new kitchen design has this configuration. Here’s a video explaining some things..

As the story goes we really never intended to replace the whole kitchen.  But when we looked closer there was just too many things wrong.  We thought that just getting new counter tops would be great..  Now that grew into spending three times as much and just make it right!  Worth it Right! 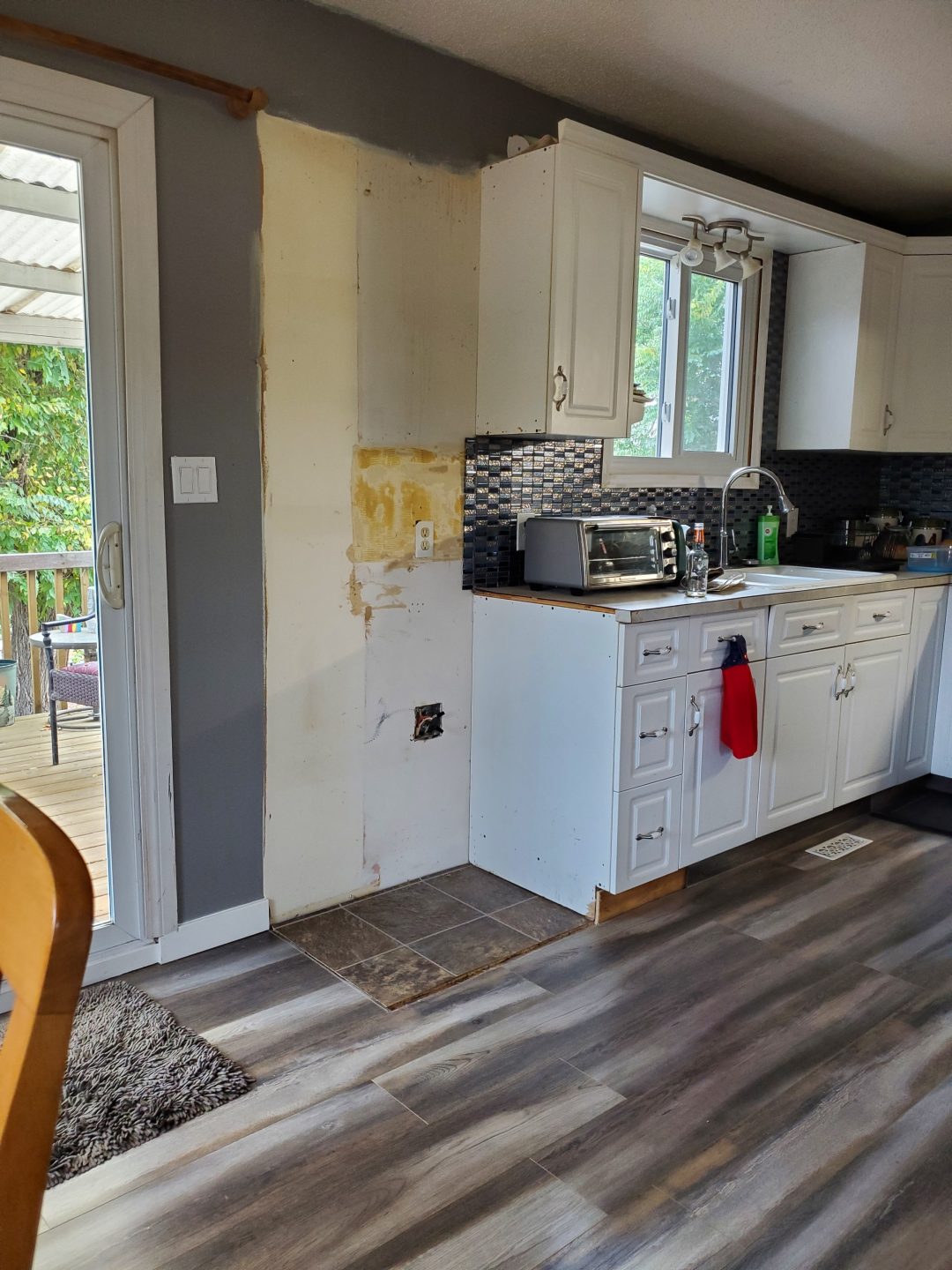 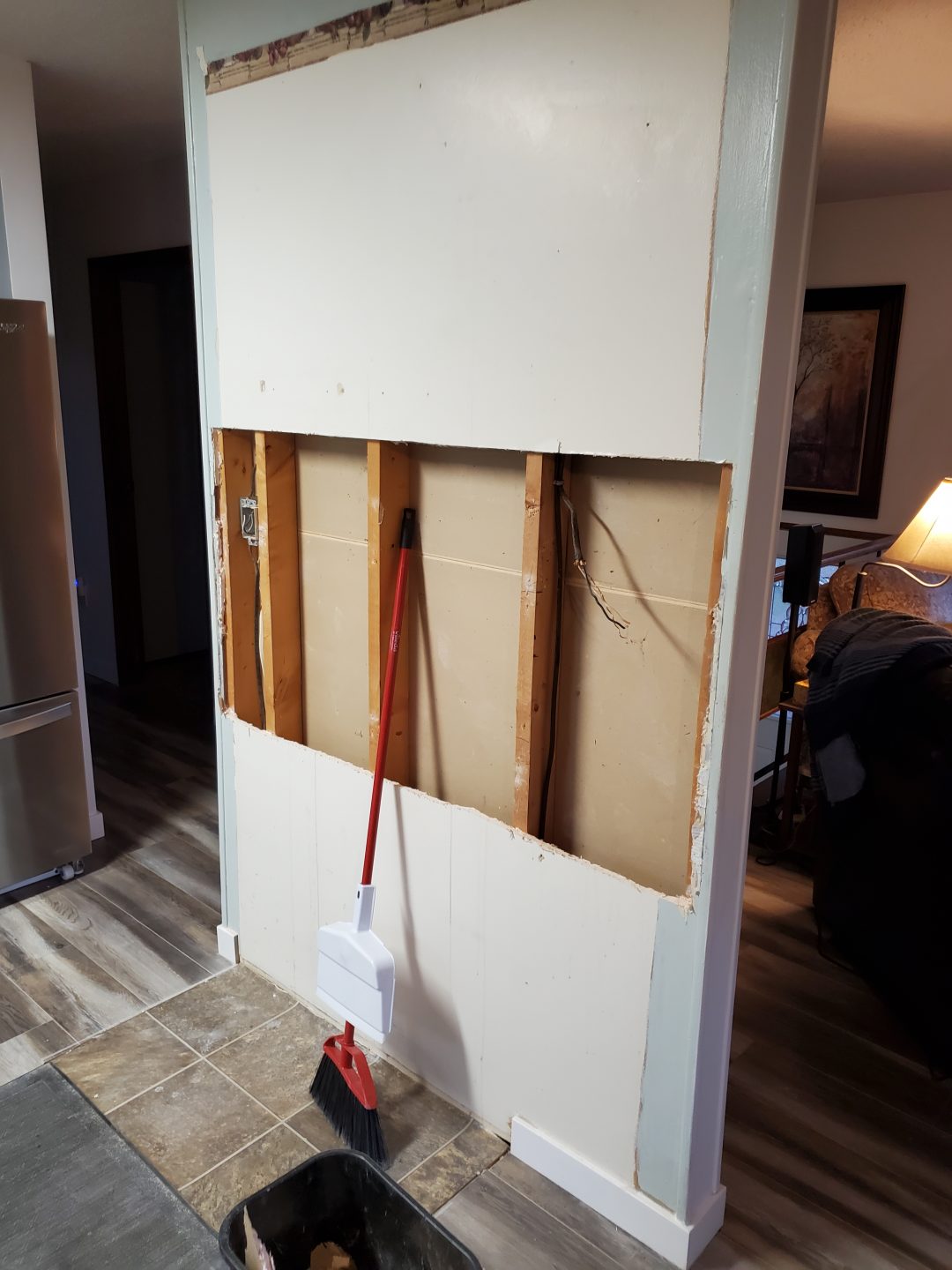 This is the wall that a lot of folks remove for an open floor plan. That’s not going to work for us.. it’s needed for more cabinets and more electrical.  I had to remove the band of drywall that had the tiles glued to it.  That allows for fixing the wiring, and new surface for new tiles. 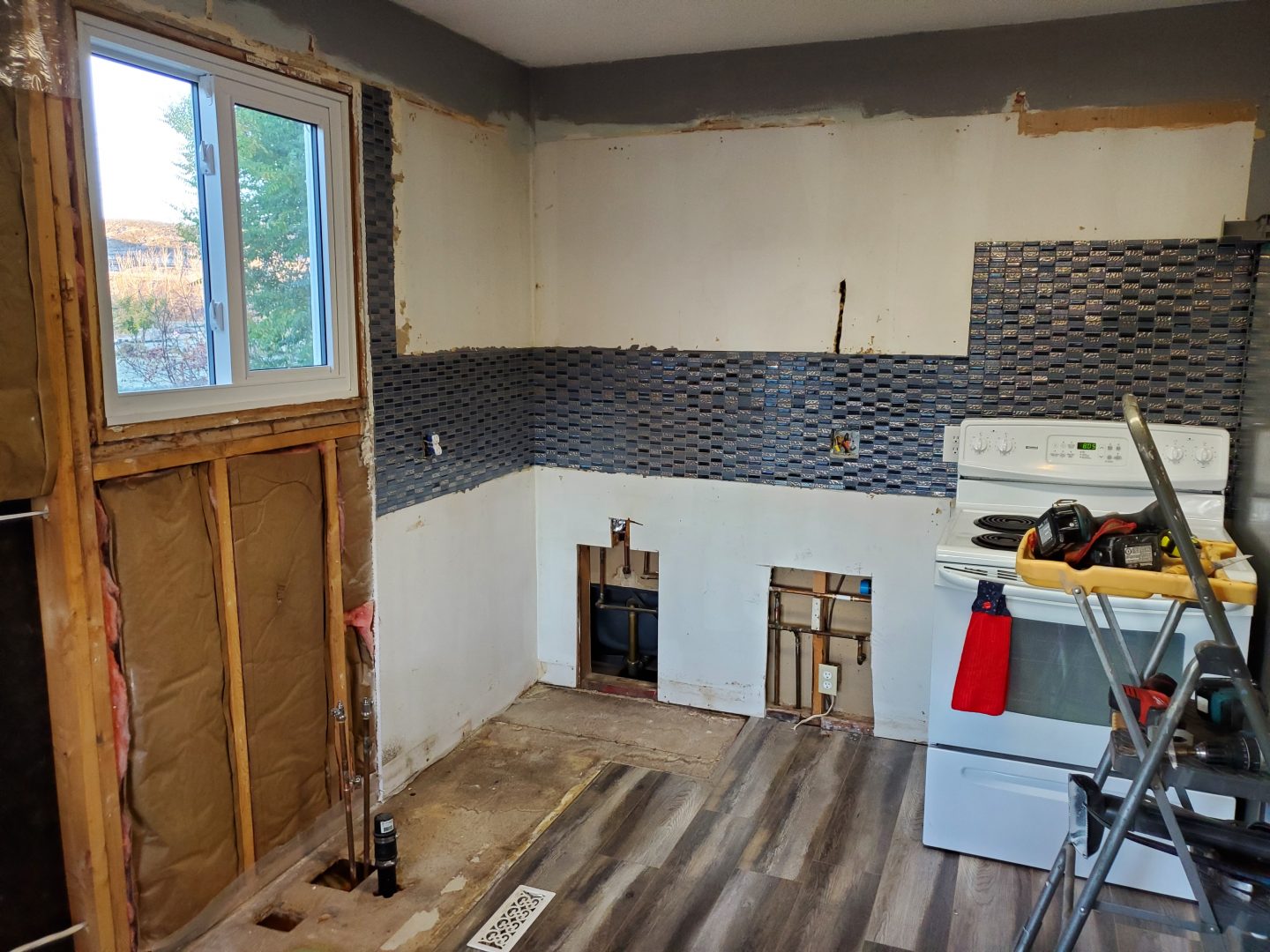 With all the old cabinets gone , I’m working my way around the walls removing only what’s necessary.  Those access holes were already there. 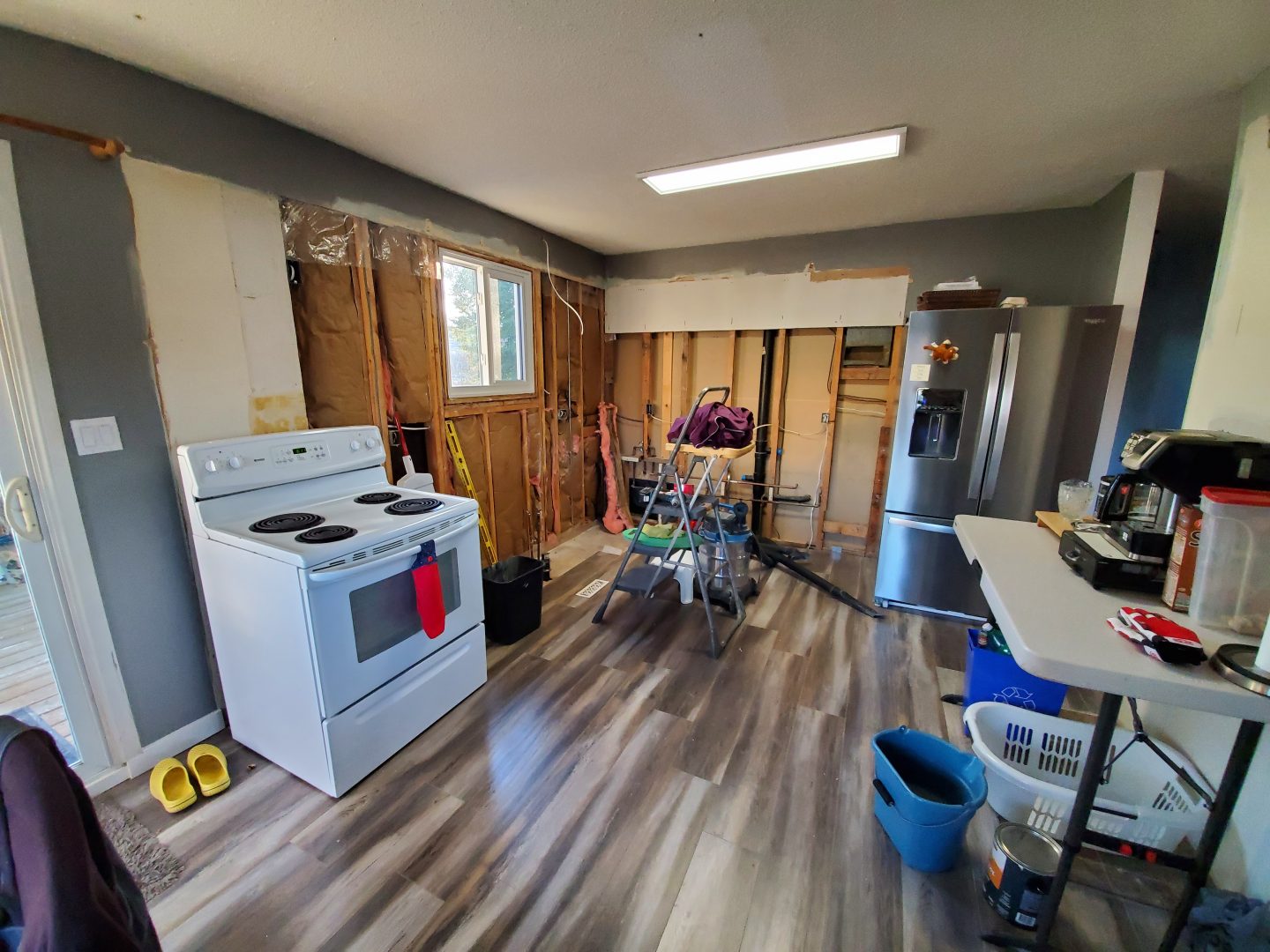 There! all the drywall removed and a few surprises. I moved the stove over to it’s new home so we could still cook.

So let’s talk about those surprises shall we !

Nothing wrong with the window wall.  But the one between the bathroom and the kitchen…  I was really wanting to see more of that. First off there was a stove vent..  I believe it went up to the roof.  Cause the roofers found a vent cover that seemed to go no where.  So they patched the wood and carried on. 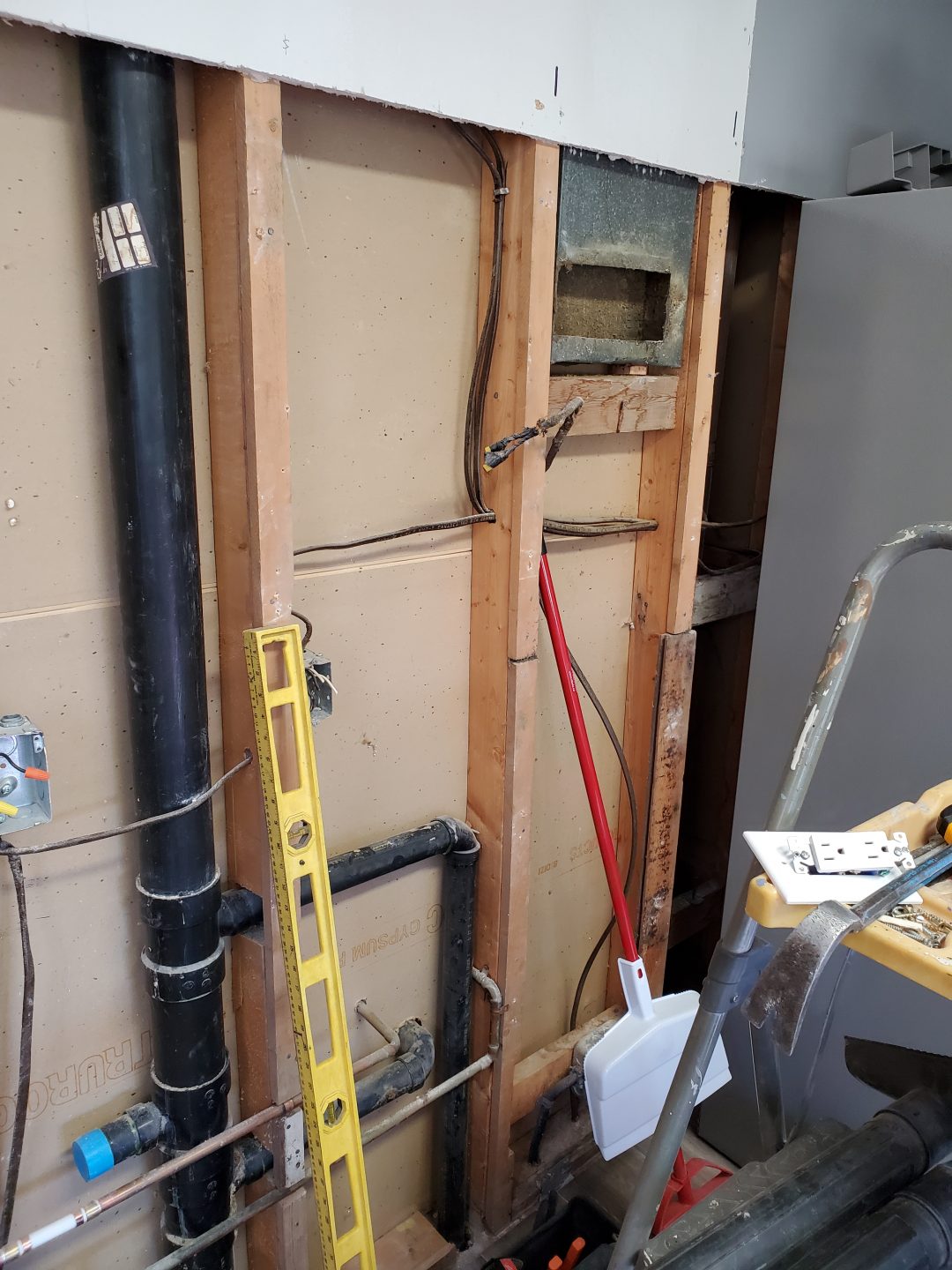 There it is beside the fridge.  Whomever did the back splash tile just tiled over it..  Okay that works..  But the wire for power to the hood was just taped up and left in the wall. You can see it by the red broom.  NOT good !  There also was a set of three switches that worked the hokey lights over the upper cabinets, and the one over the sink. And the heat lamp under the cabinets ?  Not sure what that was for.  Both these wires got pulled back into the basement and removed from the utility room light box …. where a zillion other wires were connected. 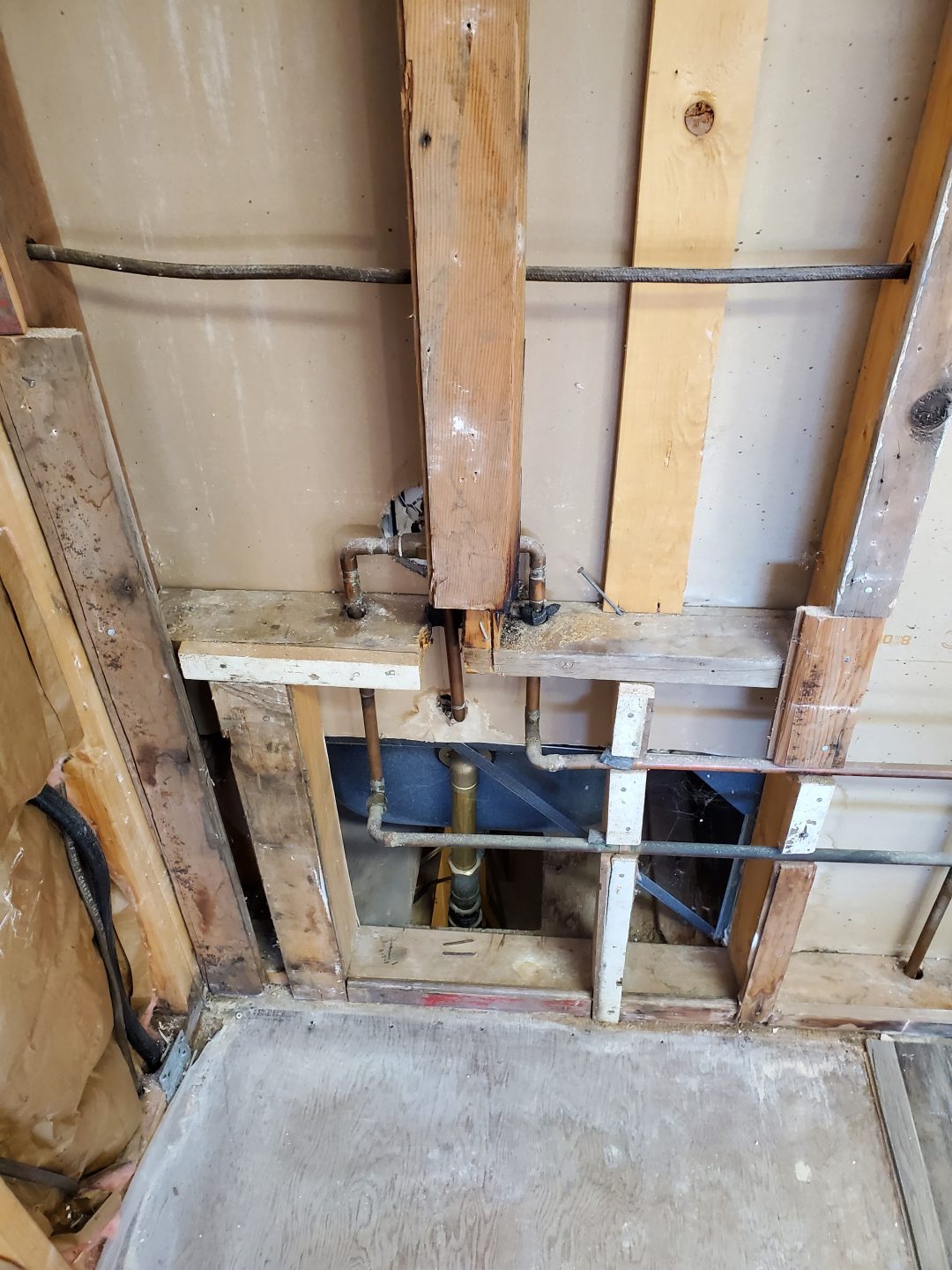 And here’s the bath tubs business end of things.  Some pretty fancy framing there..  I was thinking of changing out the tub faucet … but there is nothing wrong with it. The pipes are good too.  So leave it alone.  The one mystery that needed solved… Was the creaking sound coming from in the wall when hot water was run in the bathroom sink.  Watch this video…

Again not too surprised ..  The house has been full of DIY gone wrong.  The fridge needed it’s own circuit  and we needed a proper ground fault plug in the bathroom.. 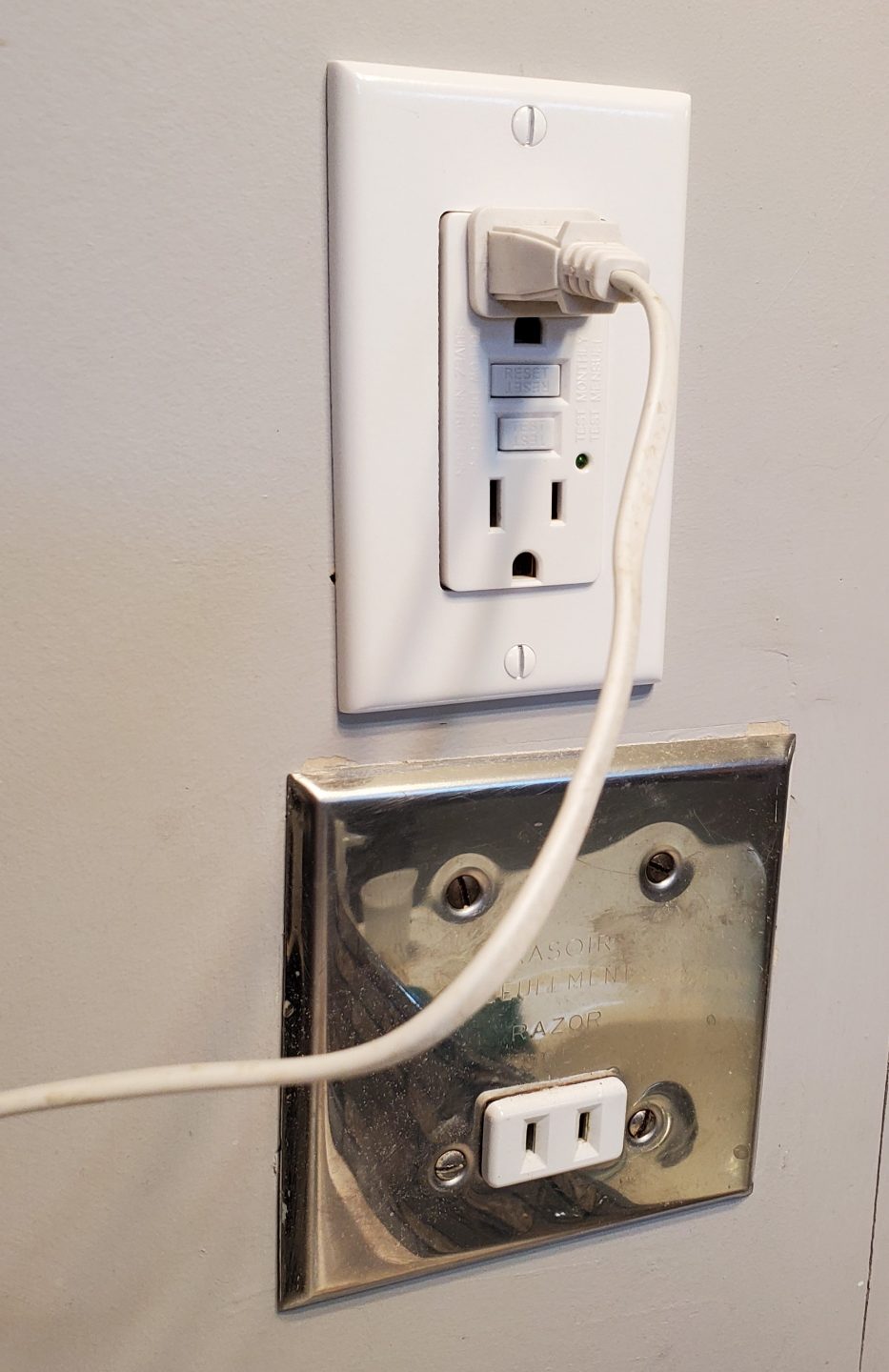 Done!  Easy when you have this kind of access.  And the mystery pipe noise from in the wall..  Solved !  Someone mounted a shelf bracket into the drain vent, pinning it against the dry wall. 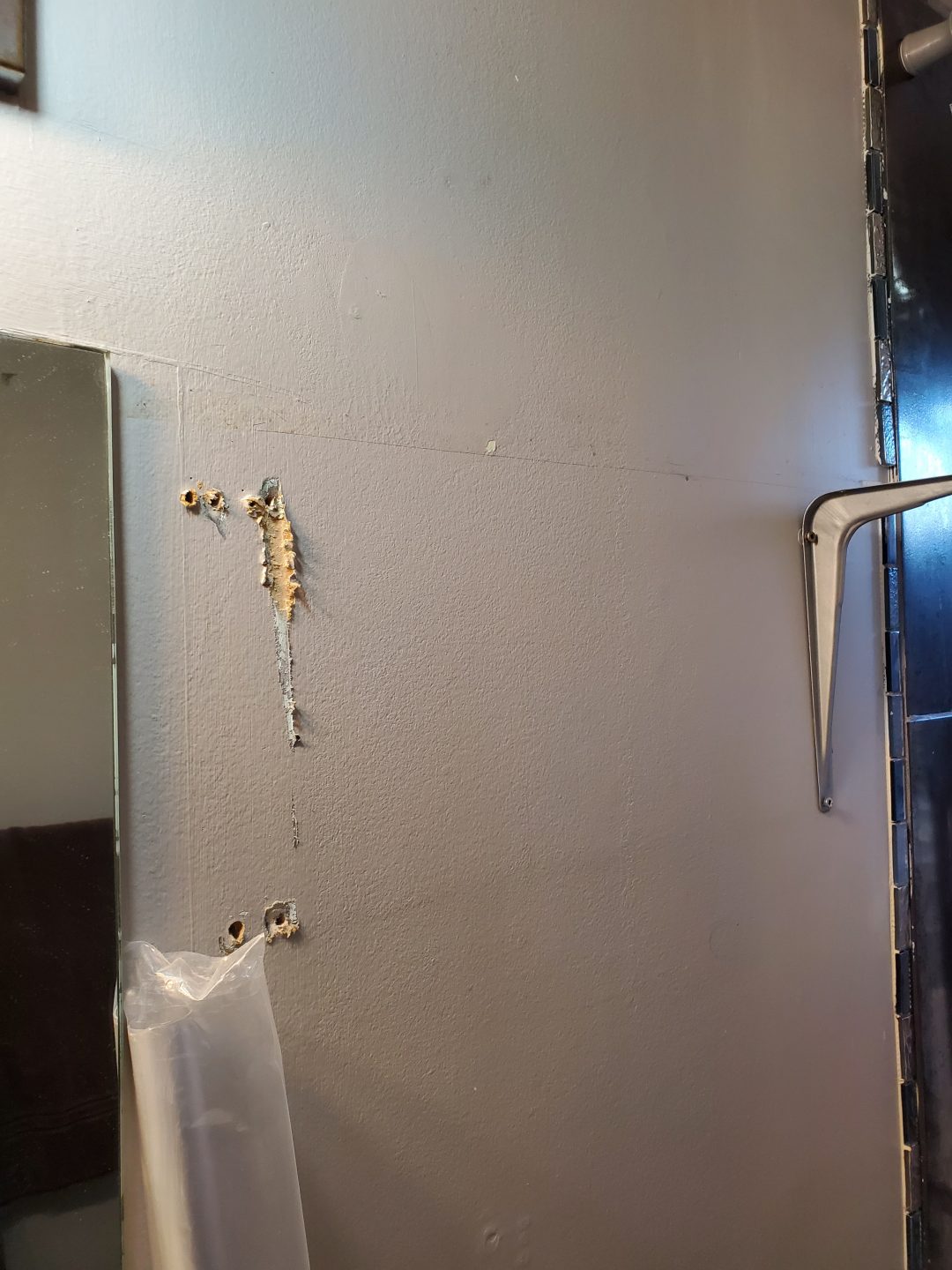 So after several attempts to find something solid they did !  the vent pipe …  Why not.. but to their credit there was no way to know unless you have a stud sensor.  Stuff happens. 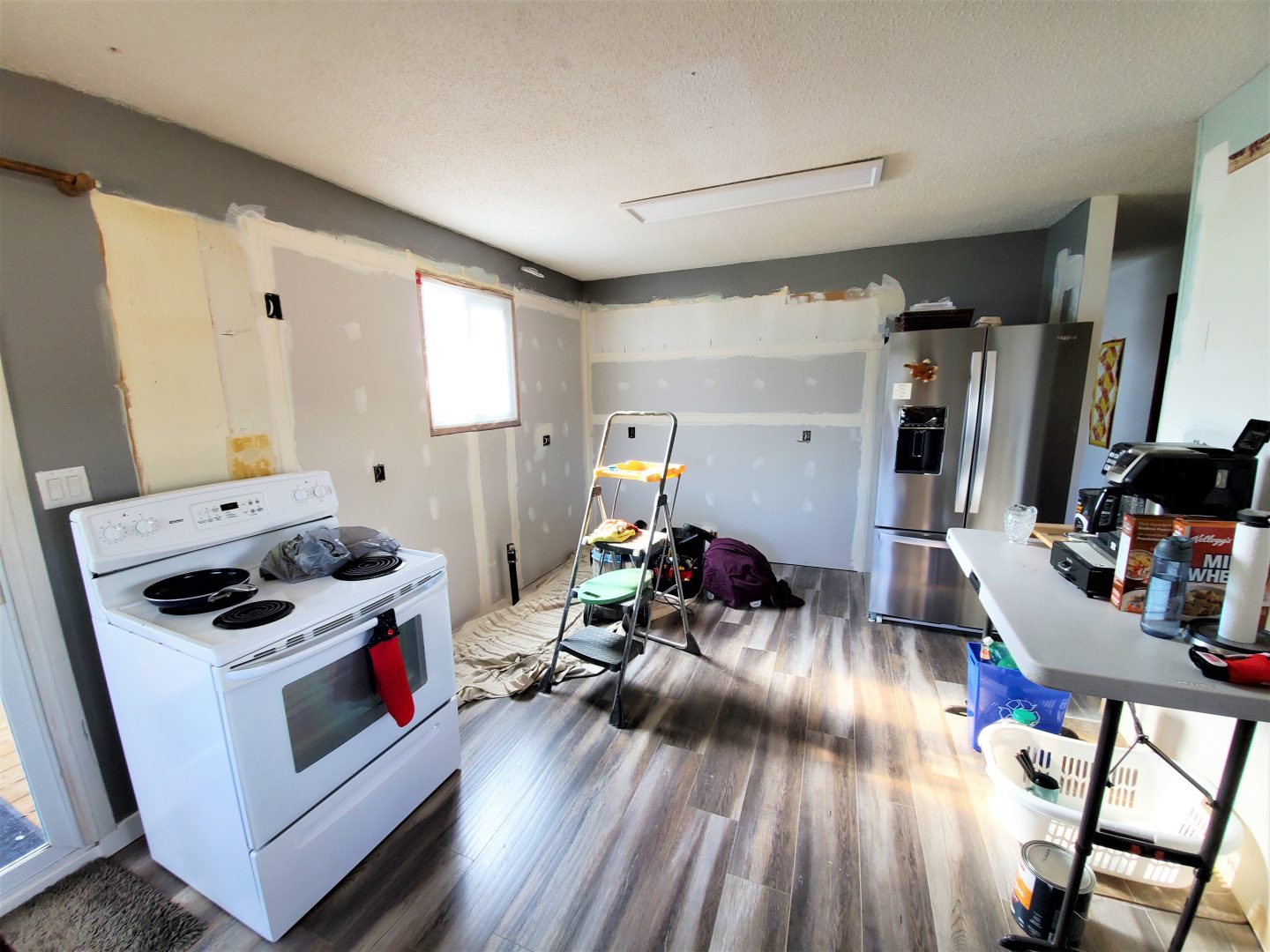 Speaking of things happening…  The dry wall is done and the first coat of tape and filler. It feels good to be putting things back together rather than fixing stuff.  One more coat of filler , then primer and paint..And DONE ! 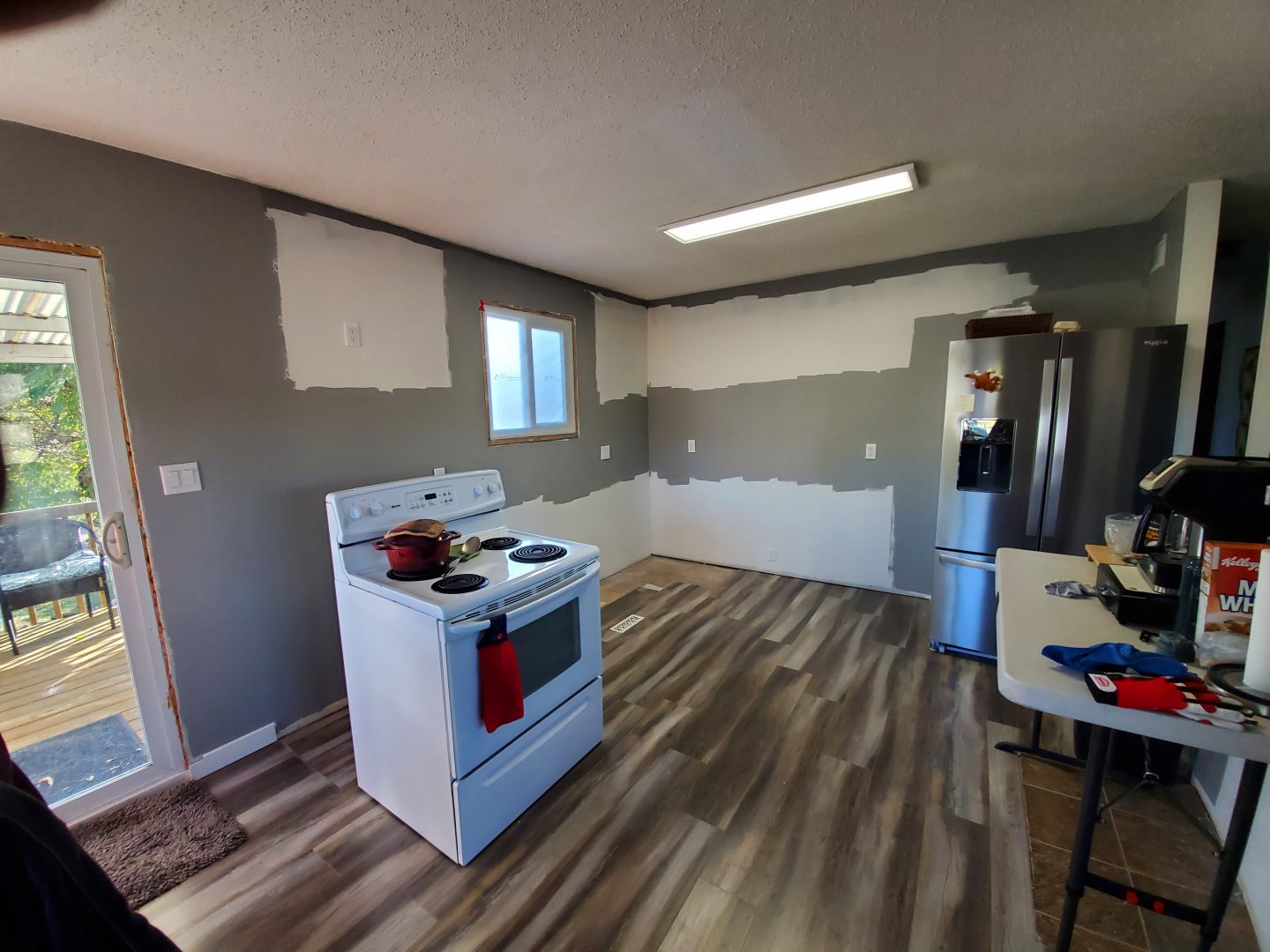 There… ready for the cabinets.  They are coming tomorrow.  I only painted the grey where needed..  So lets start a page 2.