I already did the bathroom drains, and the plan from the start would be to replace the pipe nightmare with new PEX .  And I can do the whole house… because the kitchen is getting it’s overhaul in October.  That will involve taking down the drywall behind the sink and the wall backing the upstairs bathroom.  All the back splash needs to go.  Some wiring needs work in those walls too.  So much of the water piping is a bloody mess.  No saving it..  And there’s some bad things ..like the main water feed going along the outside  concrete wall.  YA it could freeze if it gets cold enough.  Guess that’s why there is pipe wrap on it. 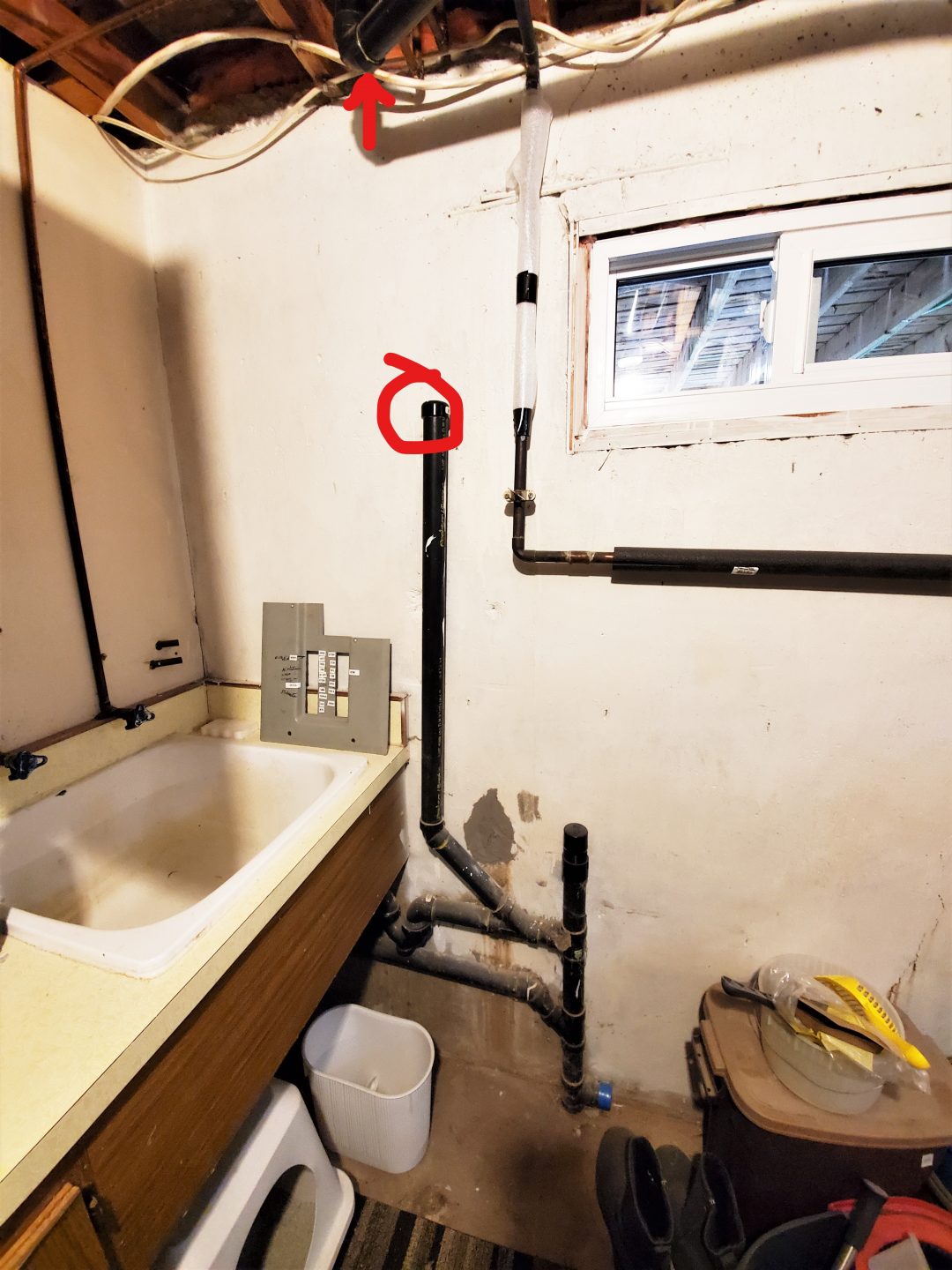 In this photo you can see that pipe running under the window ?  It does not need to.  And what’s up with that drain pipe?  Fairly sure it was hooked up to the kitchen sink drain (red arrow).  I’m thinking that will go back there instead of cutting across the room.  In the future this laundry room will also get a much needed makeover. 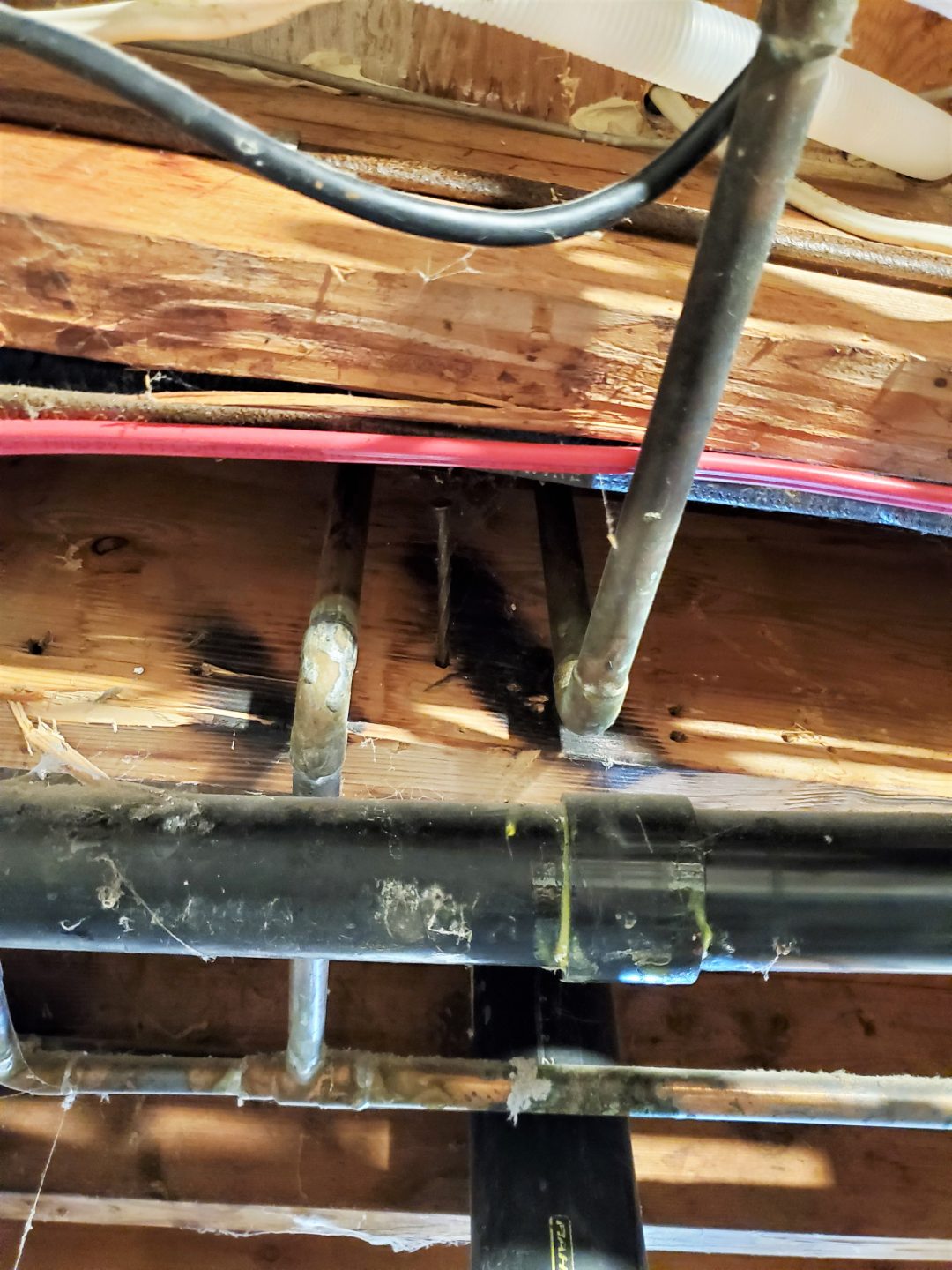 These two pipes (one hot one cold)  Go up into the wall between the kitchen and bath. I’ll temporally hook up to them …till the kitchen work happens. 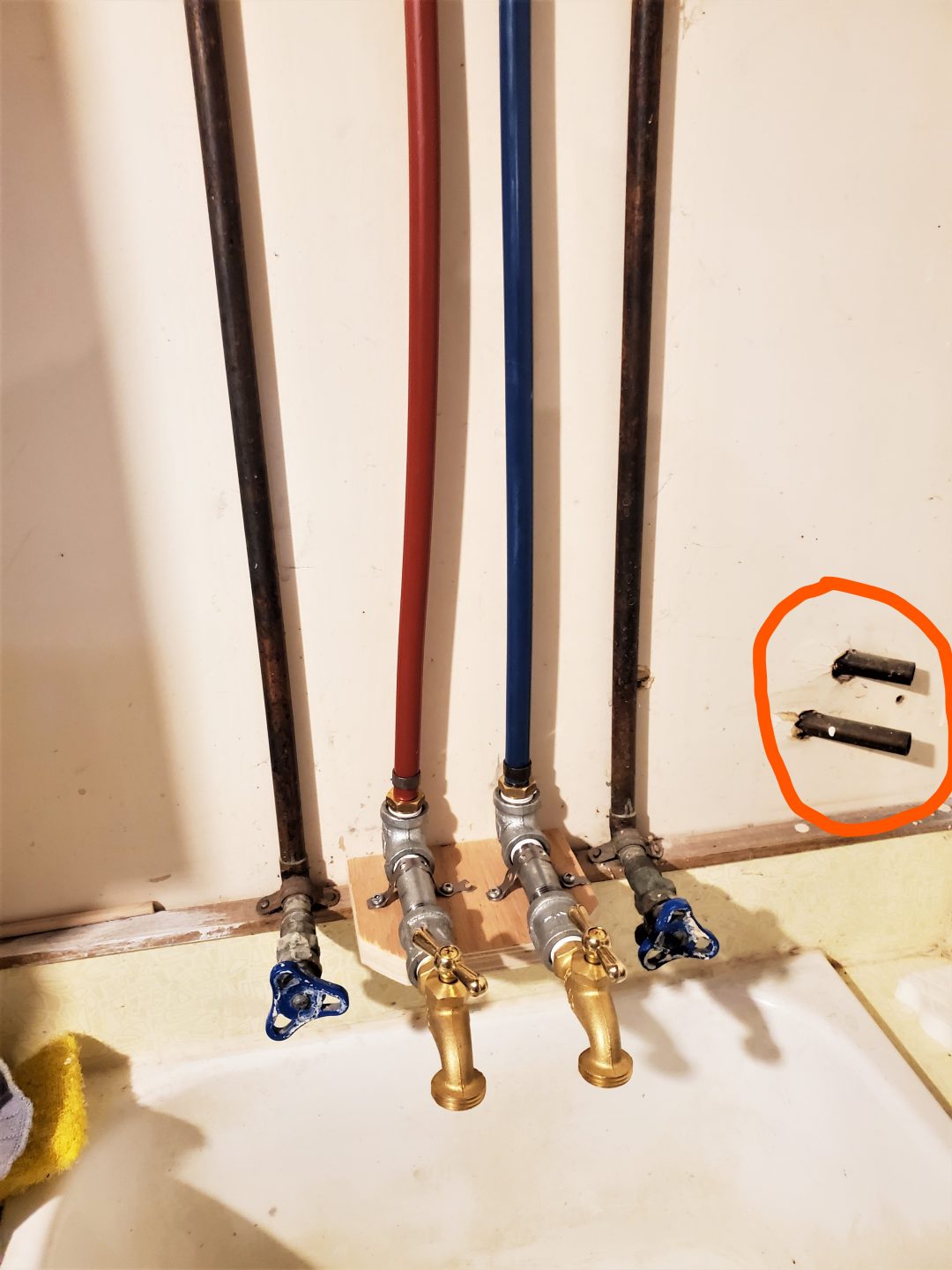 So the plan is to build the new plumbing system along side the old.  Then hook it all up at one time so there is less down time.  And what are those mystery pipes..  just rattling around in the wall..  I think there was a bar sink in the rec room other side of this wall.  AND did you know …you can’t buy the old style laundry sink faucets any more..  had to make my own. Down the road when this room gets it’s make over All this will be inside the wall and proper faucet. 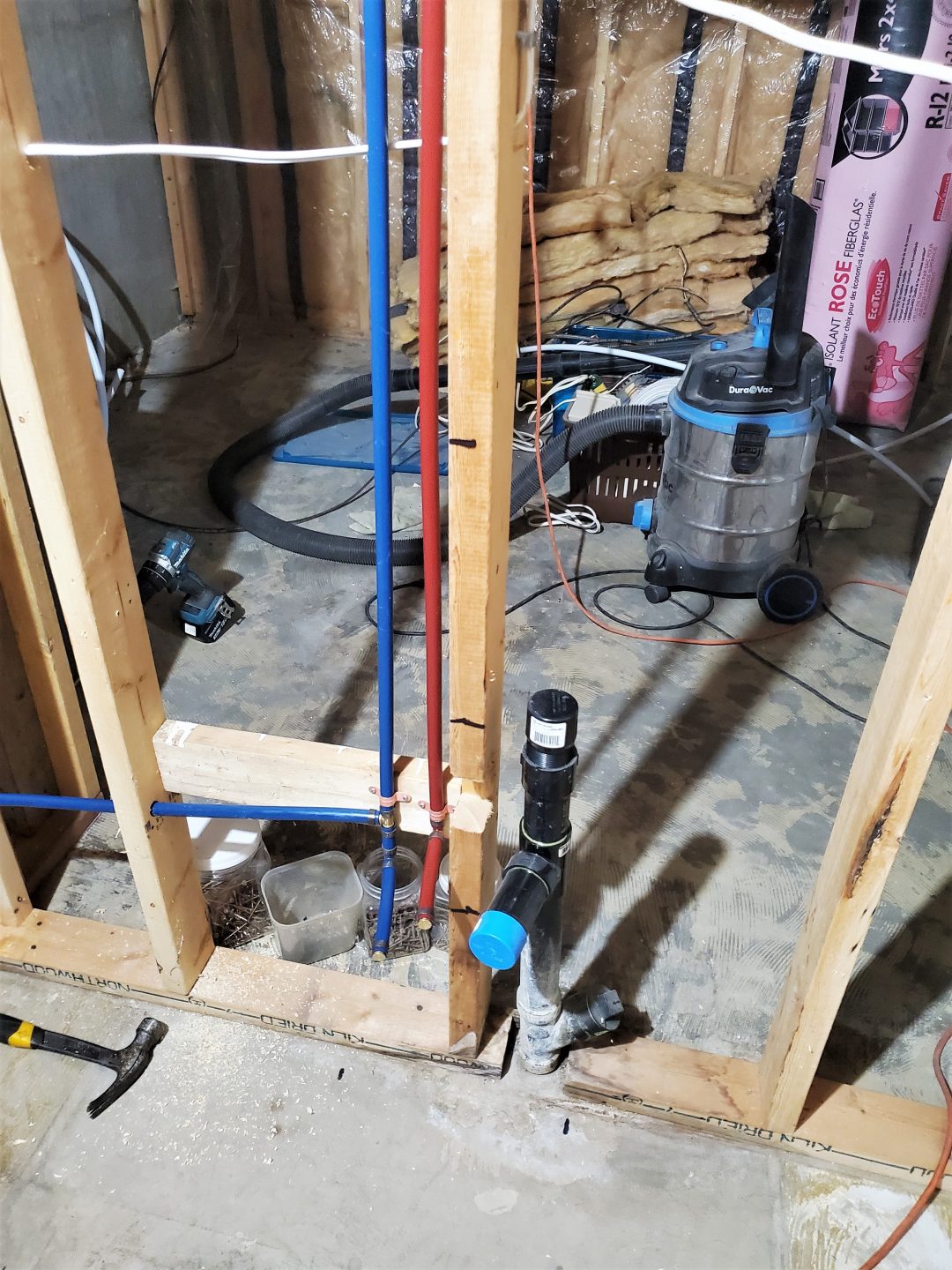 Here’s the new plumbing all done in the basement bathroom.  No mistaking hot from cold.. And yes the cold is on the wrong side.. but these pipes cross the utility room parallel to each other and I did not want to cross them over.. On the other side they are correct.  You will see later. 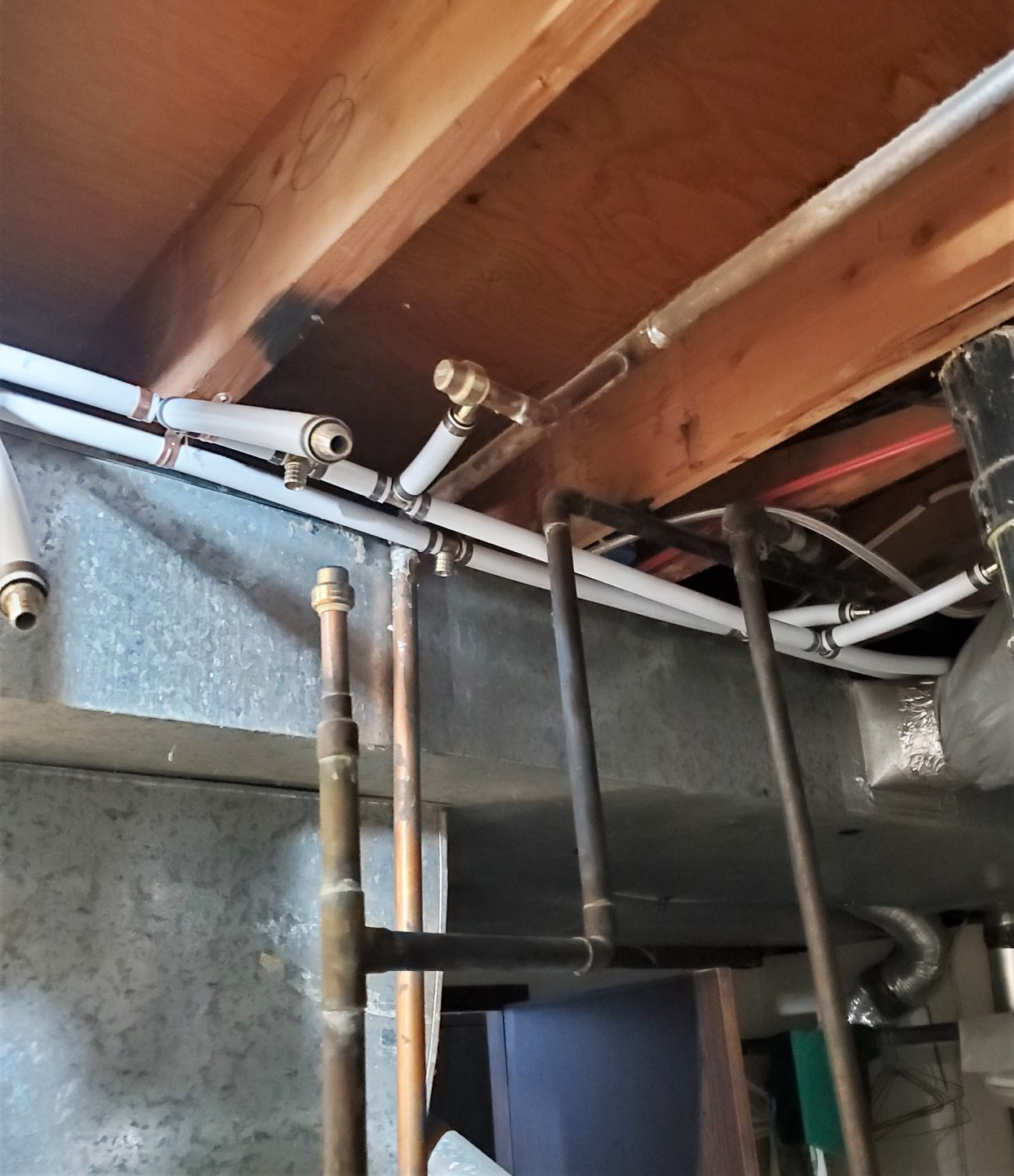 Here they are 3/4 ” PEX and are (loosely ) in place..  I’ll firm them up after the copper is gone and out of the way.  This is were they cross over the hot water tank on their way to the other side of the utility room.  Where they go back to 1/2″ PEX  and feed the laundry , kitchen and utility sink. And that’s where things were left…  There’s a part of me that wants the plumber to do the switch over..  I had to do some outside stuff ..getting ready for winter… and the Kitchen has to be started on soon..   See that post HERE.