Back to Page one Here:

The 91 is waiting for space at Linde Auto to continue.  While waiting I’m stripping down this 1989 parts Sidekick in my shop. As well as  studying those wiring diagrams so I know what to look at when I resume. My Sister’s friend Rich found this 89 Sidekick in a field in Proctor, BC.  He just wanted the extra wheels for his Tracker. The rest he said I could have. 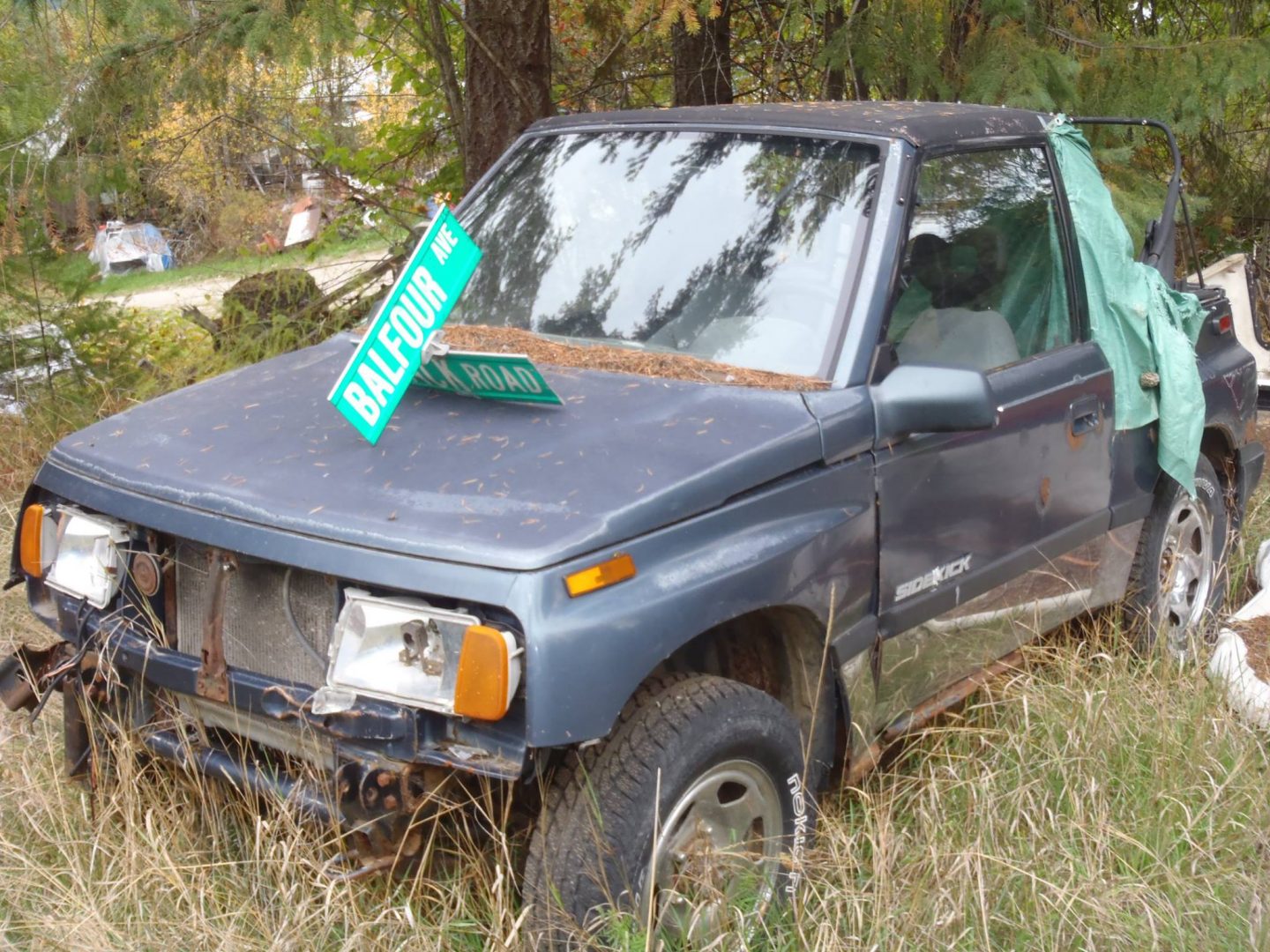 Very sad looking indeed.. but the motor was reported to run and was intact.  And even though it looks bad there is lots of good parts.  So It was worth the 2 hour trip to go and bring this one back.  If you consider the other 89 Tracker I rebuilt back in 2008. I traveled further and paid good money for those body parts .  The doors off this 89 are in fairly good shape.  Especially the drivers door.  The passenger door needs a bit of welding on the very bottom edge.  But that’s better than patching a big rust hole.  Both these doors are better than the ones on the 91.  So I put them aside for later.  The same goes for the dash, hood and a few other bits.. way better shape. 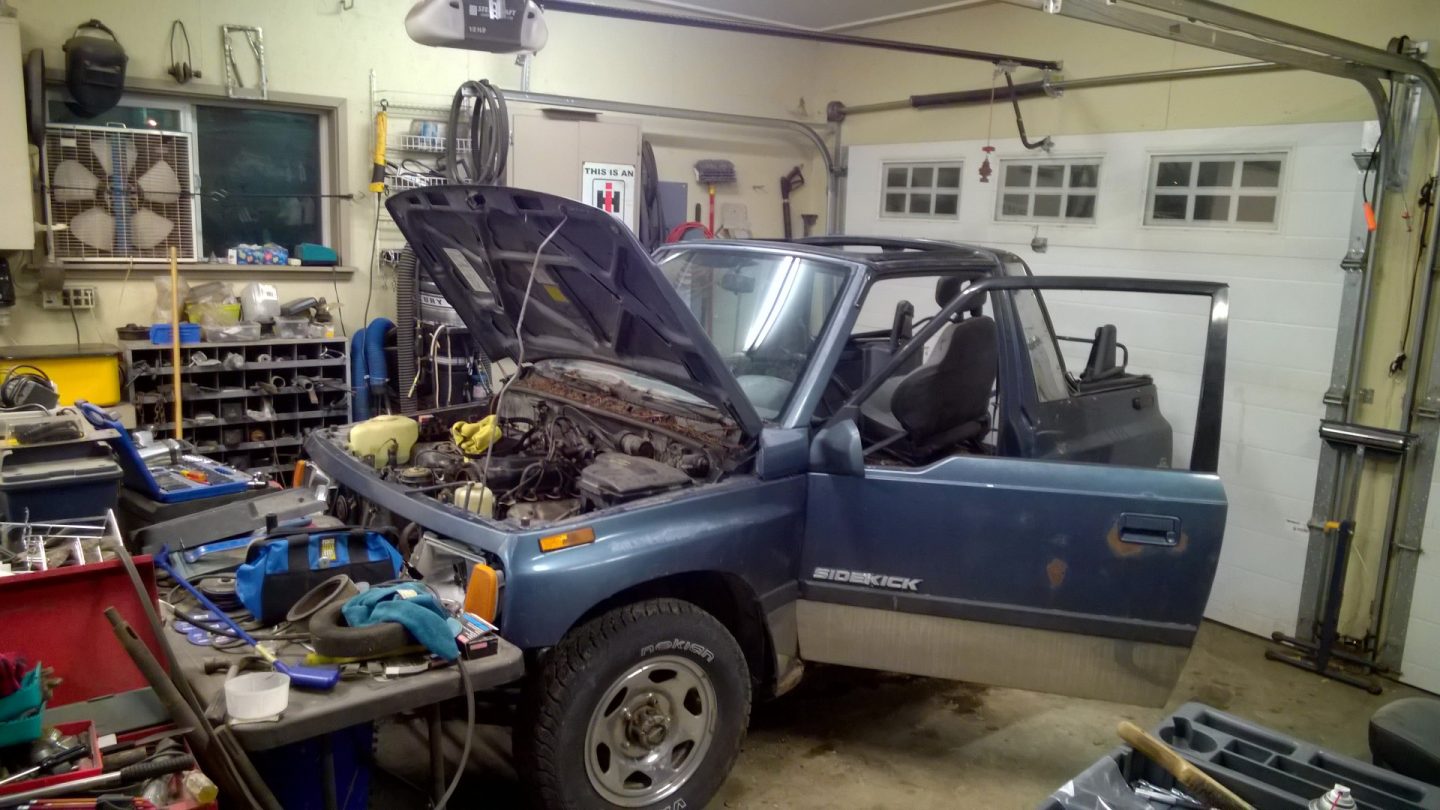 At one time this was a fancy little guy.  Wired for towing ..so it was a “Dingy”   Now it’s trashed in too many ways to be put back on the road..  And a thousand stink bugs and a few dozen wasps came along with this little guy .. Everything I took apart I found more.. So I had the shop vac at the ready to suck them up.   All worth it because  it’s donating good parts for Rich & I.   This is a Sidekick so it has the orange turn signals which I like.. 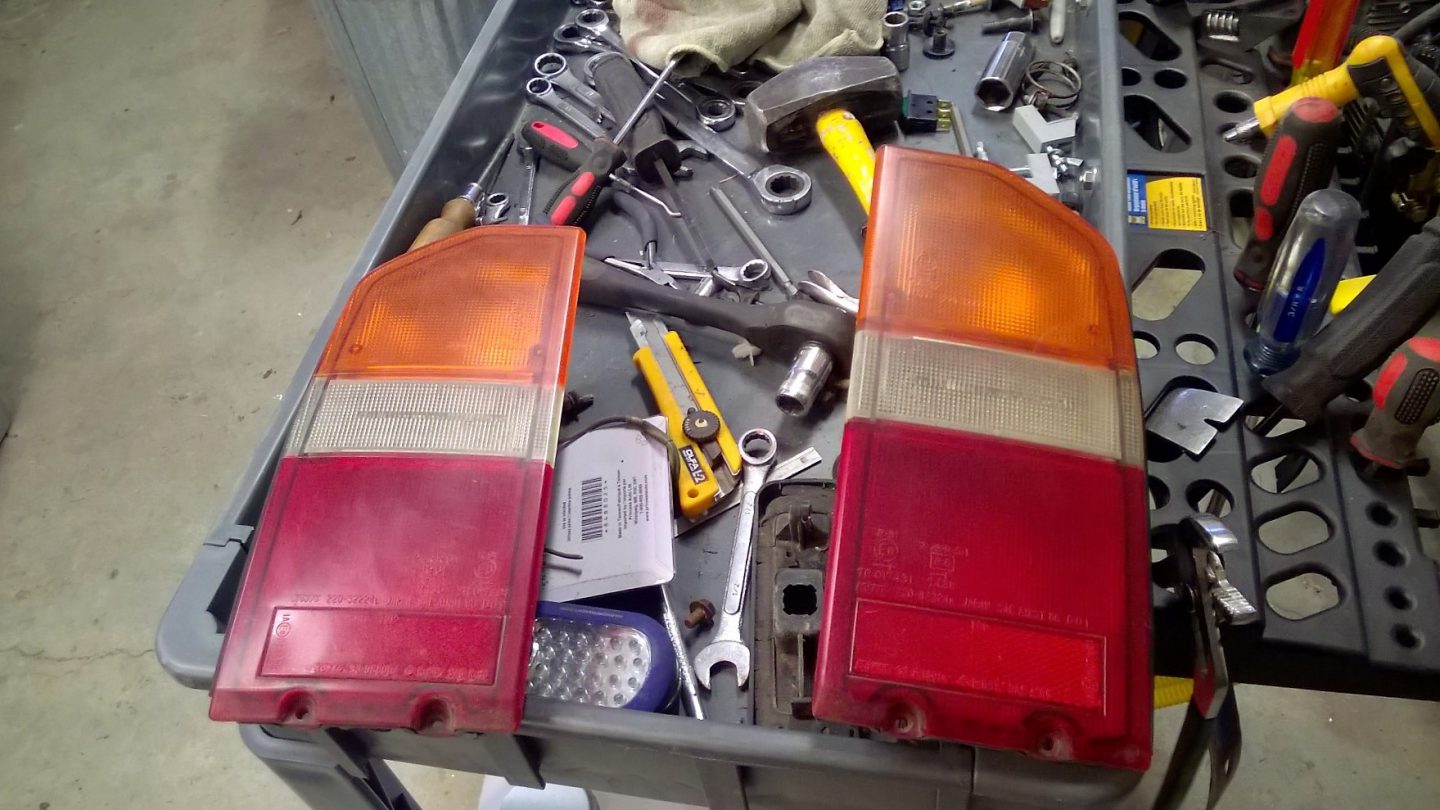 These are in perfect condition..  Once I polish them up they will look like new. 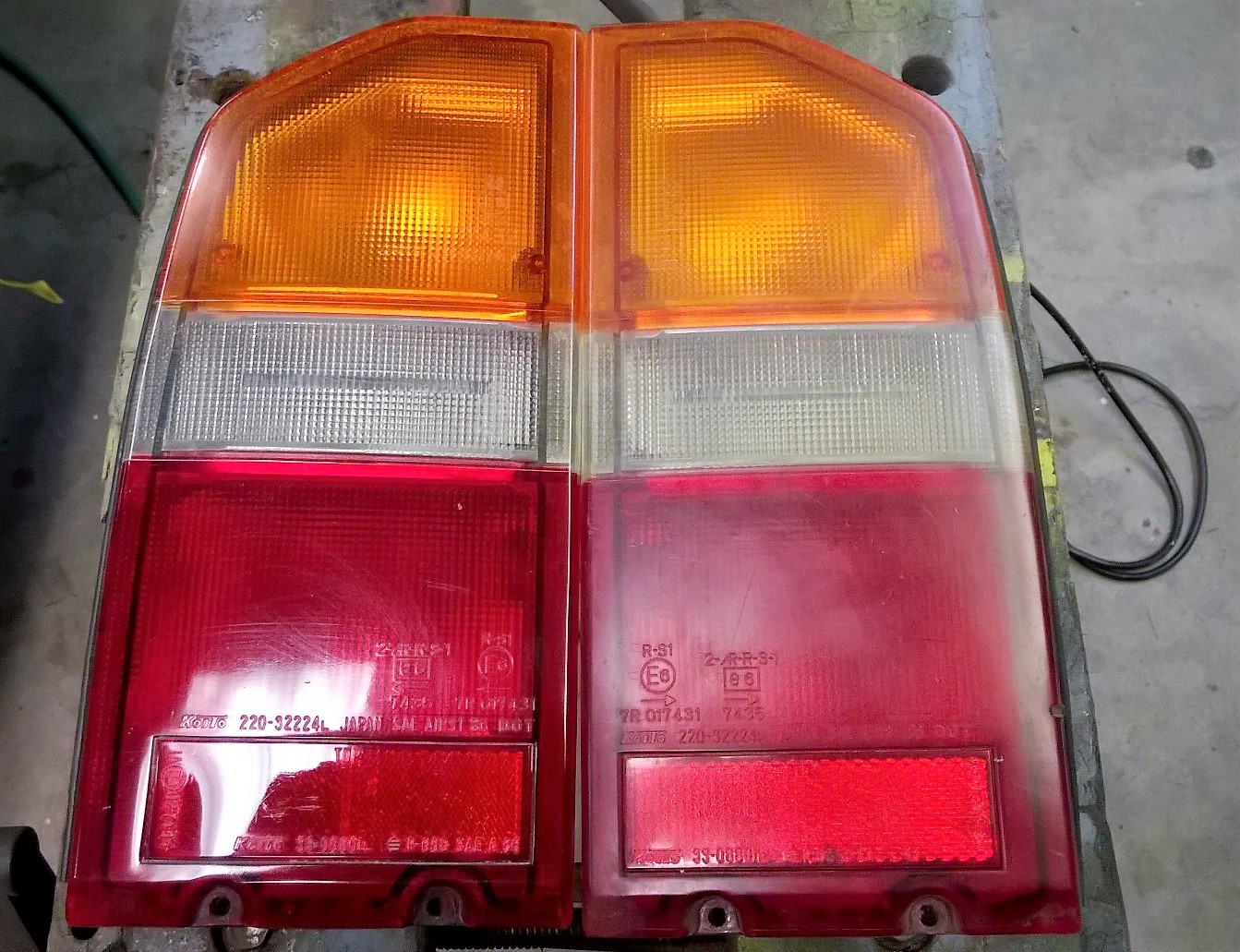 Check out the difference between polished and not. 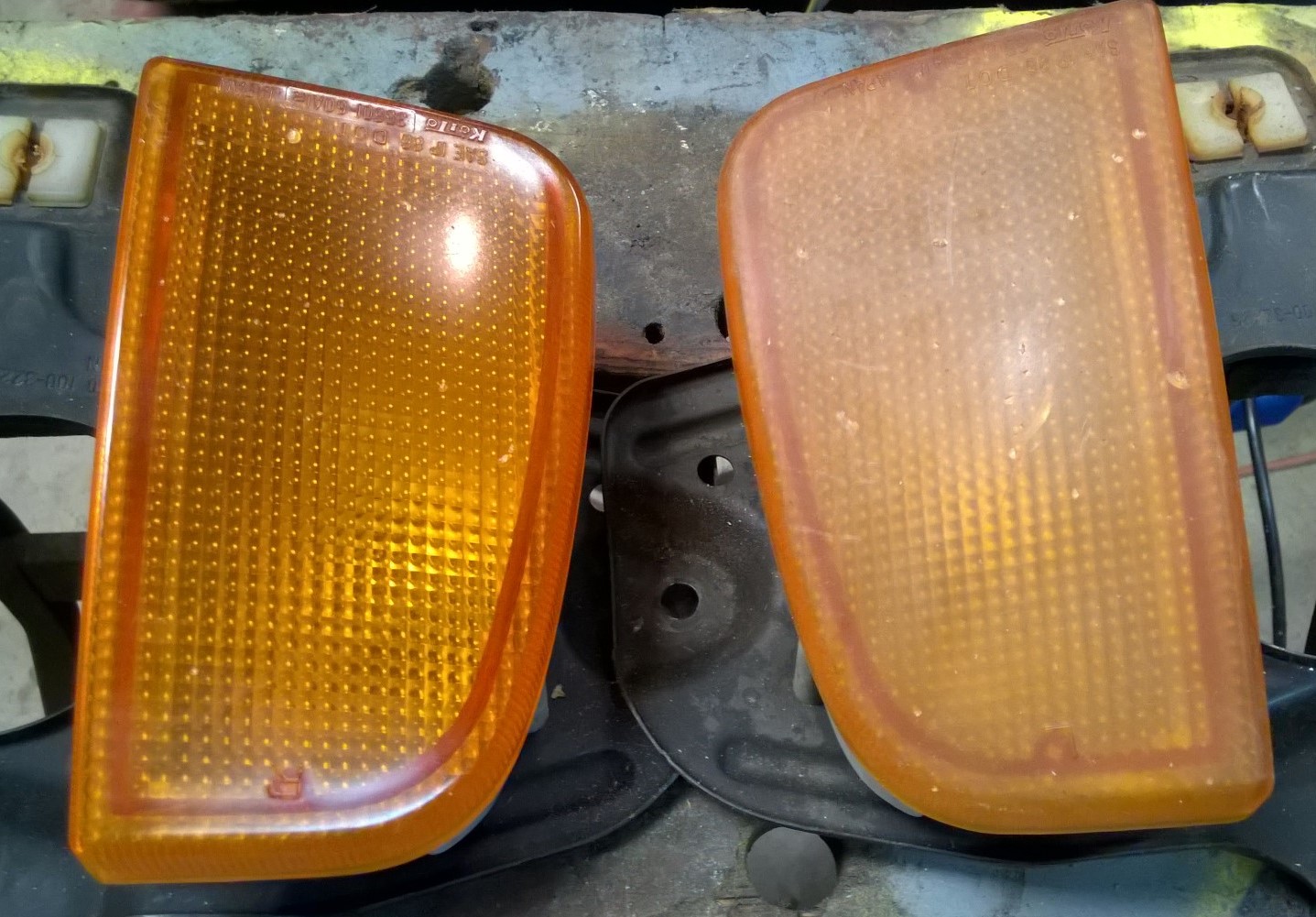 Even bigger difference in the park / turn lights from the front.  They get sand blasted in the winter.. 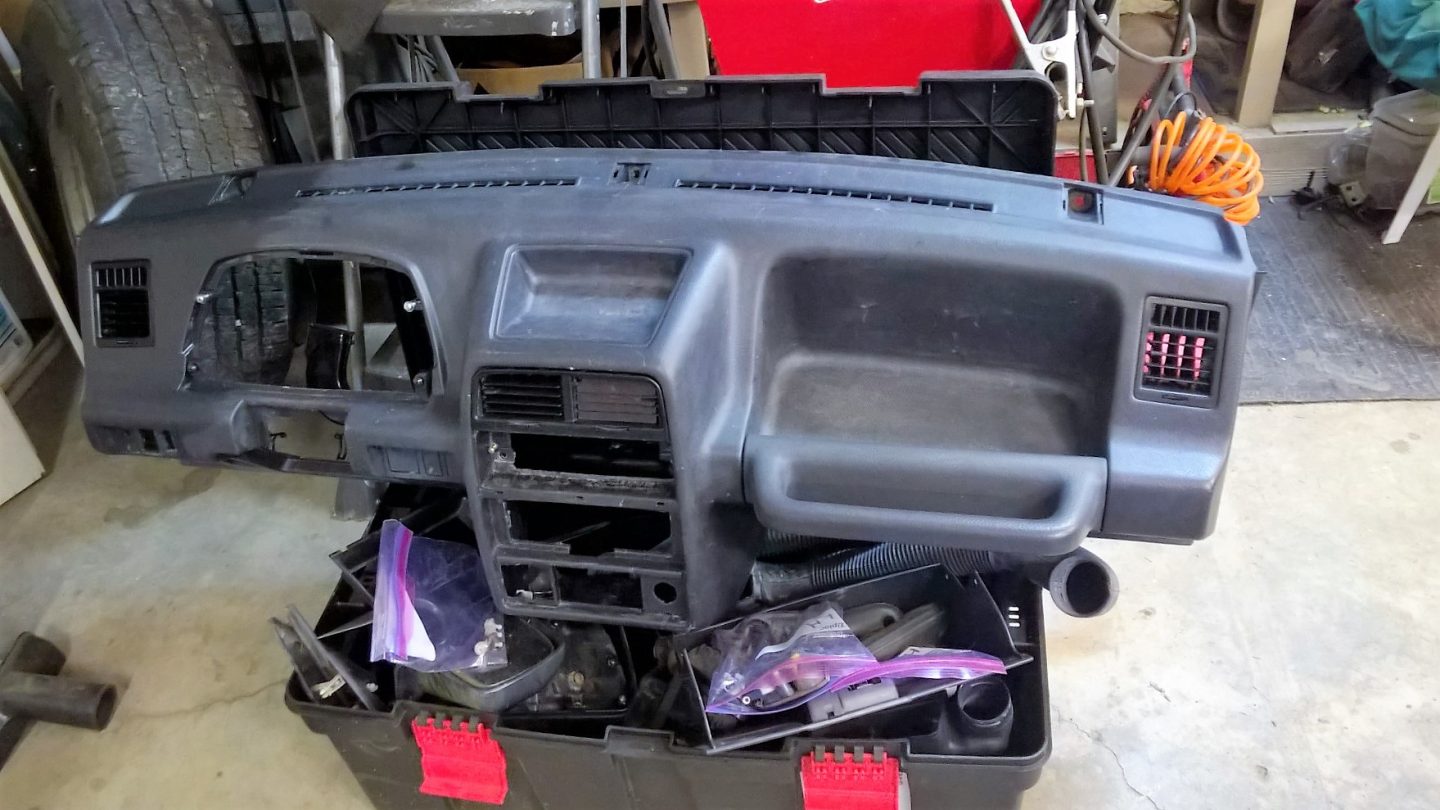 The other important part..  for me.. is the dash..  again the 89 had a much better one,  seen here.  And if you look on the left side I tried some restore treatment  wow just like new. 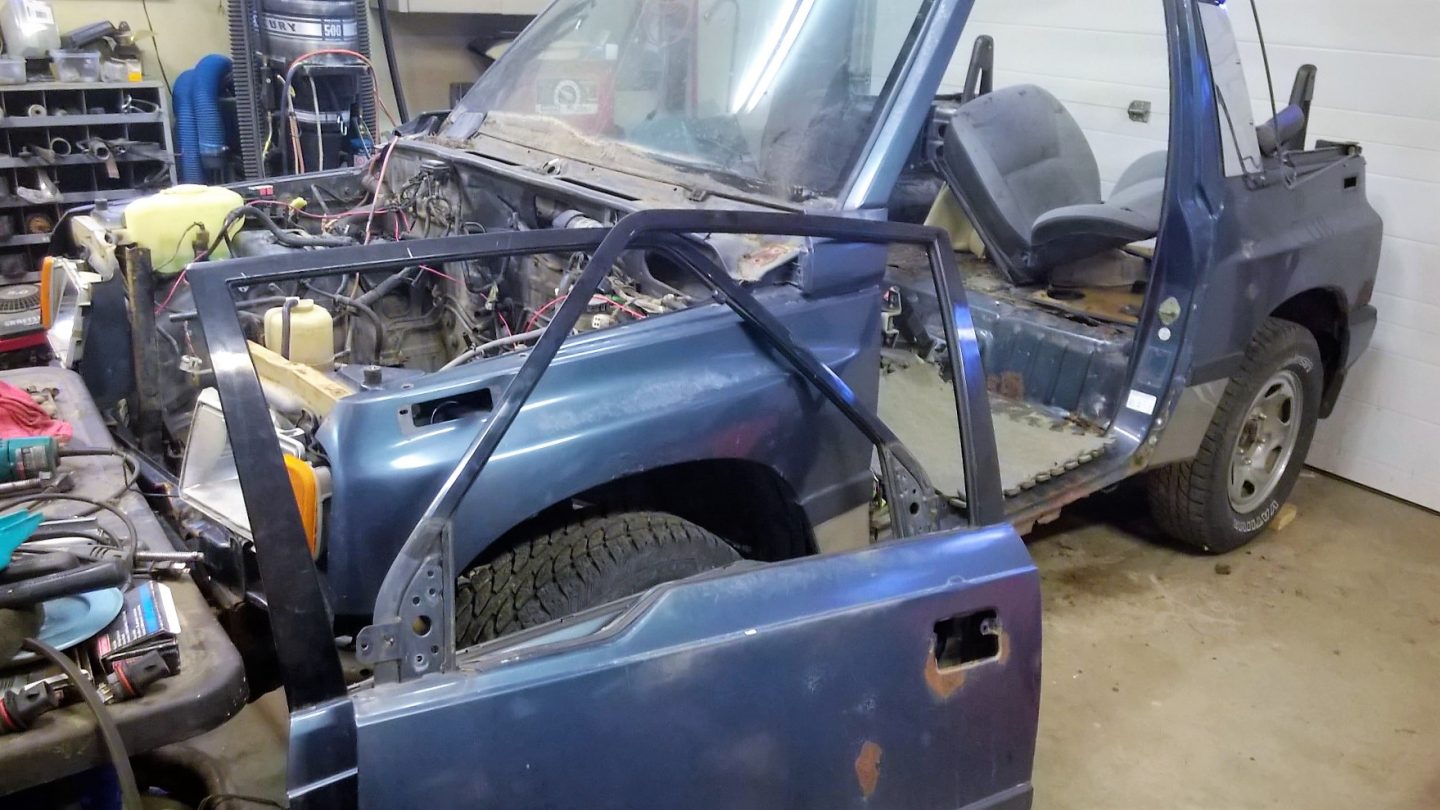 So another day or so and I’ll be cutting the body off the frame.  I want to keep the rolling frame and see if I can sell that.   So here’s what’s left.. 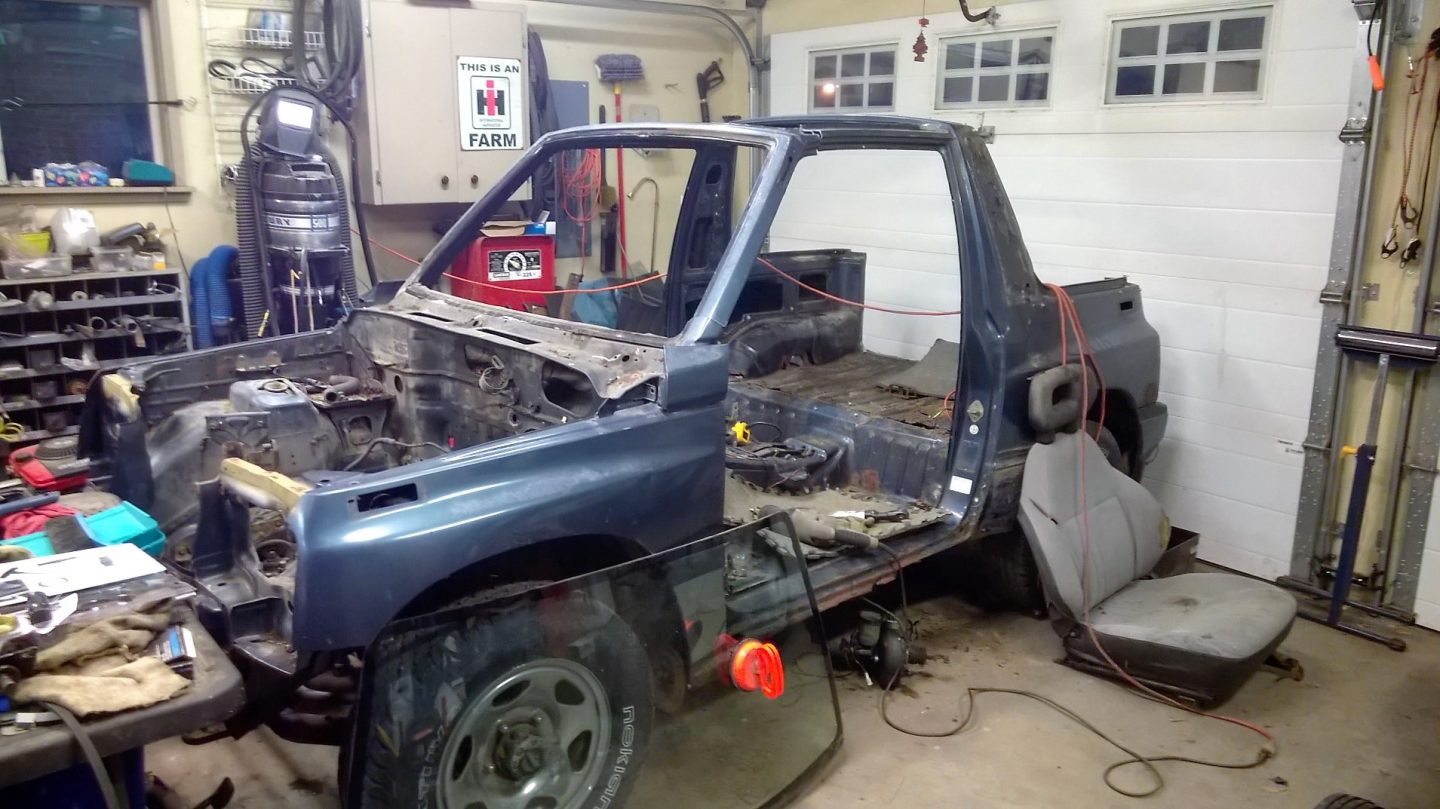 Not much..  The window goes for recycle..  and so does the body metal.  It’s a lot of work when all you got is a cutoff disc and a saws all.  A plasma cutting rig would have made short work of this. 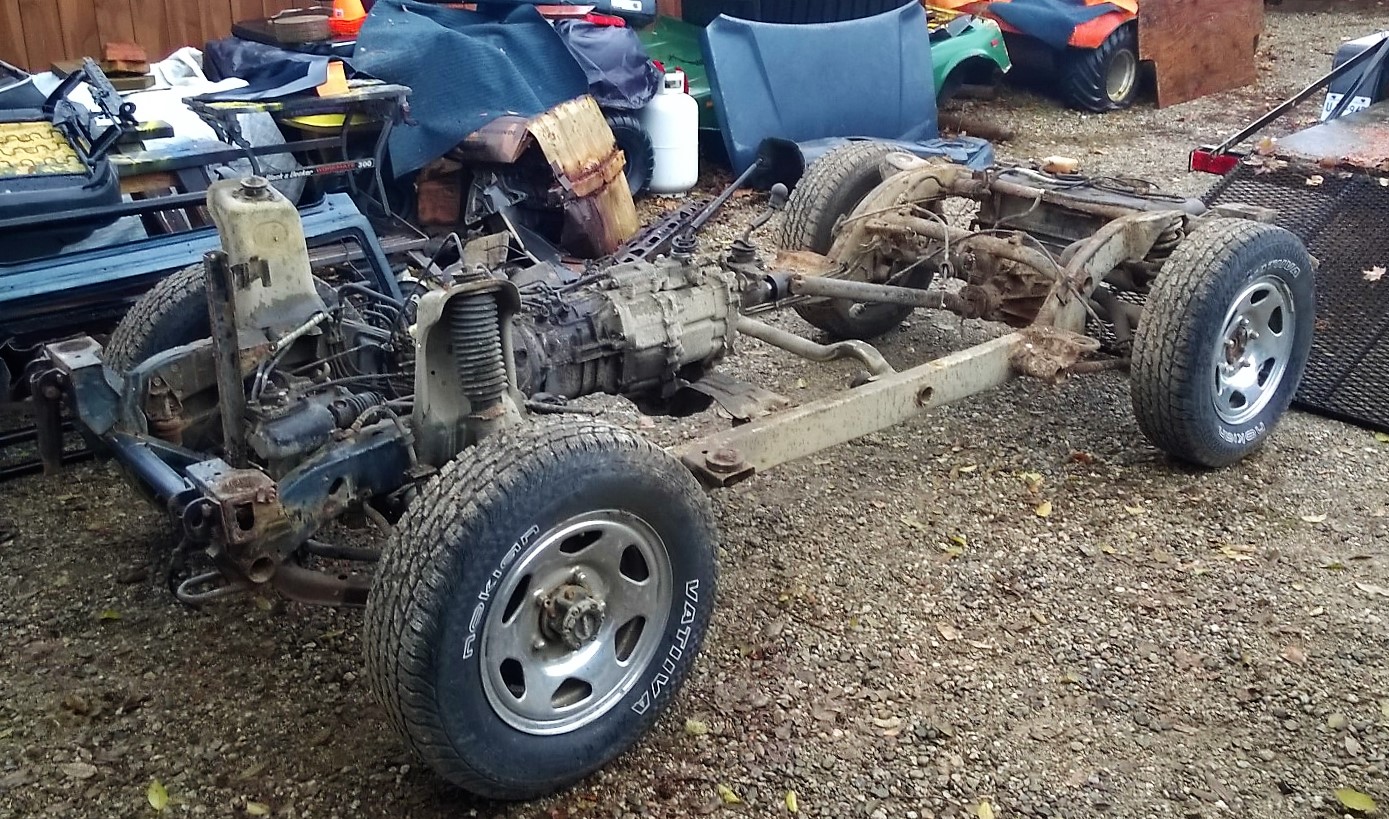 And this is what is left..  and even though the body is rusted away to nothing this frame  is in amazingly good condition.  If only someone made a fiberglass body that would just bolt right on..  I’m very temped to build my own body ..  for now I’ll just hang on to the chassis.

Now that the parts Sidekick is out of the shop..  I decided not to wait for space at Peter’s shop and bring the 91 Tracker home to get it running. 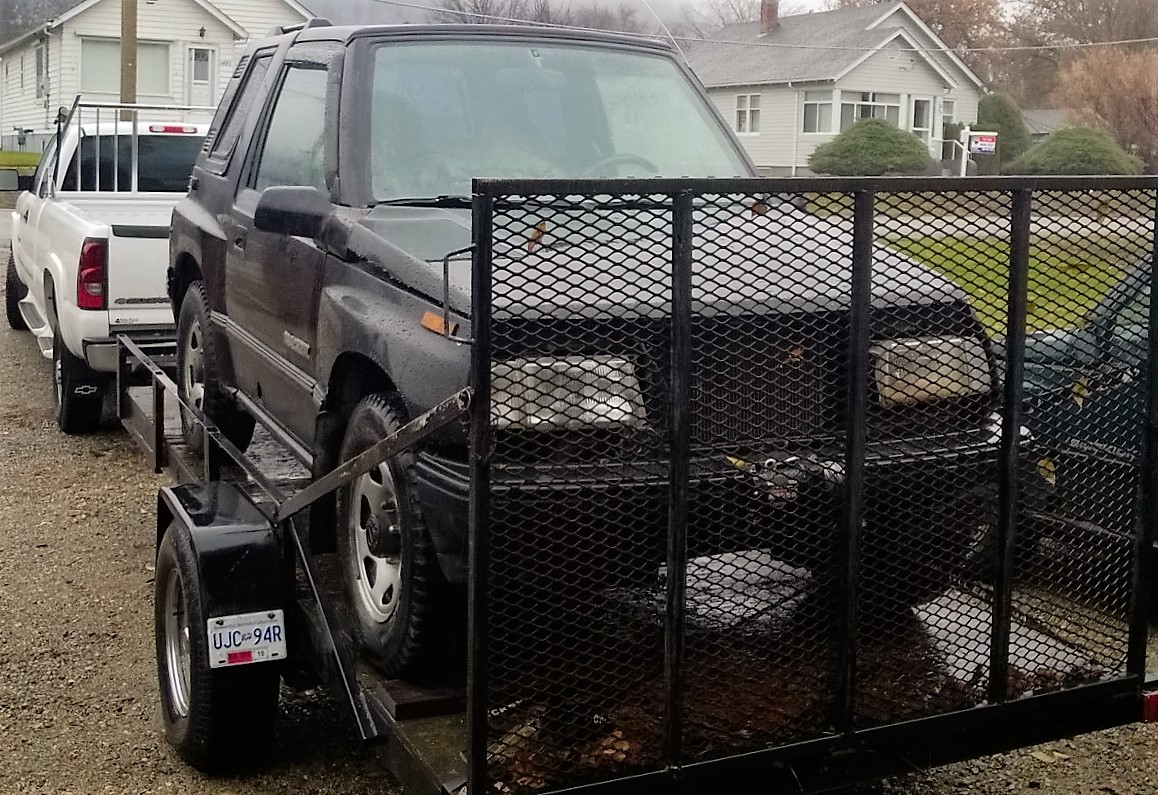 Damned if it doesn’t just fit on Dave’s landscape trailer.   Quite well to..  So I need to really clean out the shop good and we will have room to work on the Tracker. 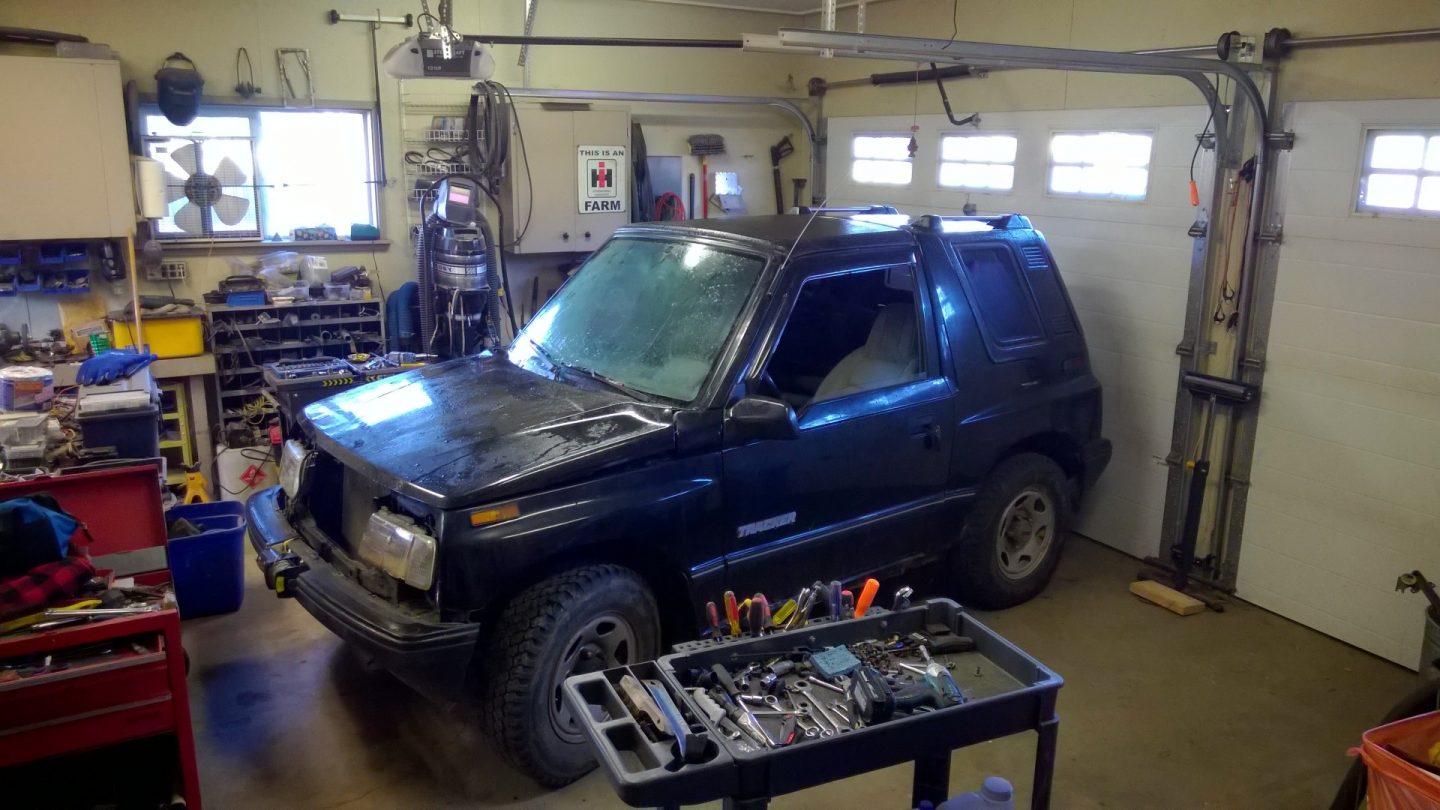 Welcome to the my shop .. little friend.   Now to look at the reason for not starting..  Both Dave & I checked all the fuses and they are good..  but no power to the relays.  So I decided that the best way would be to completely remove all the wiring for the stupid remote start. And the way to do that is to remove the dash.. I’ve done this a few times , plus I want to check a few things out anyway.   And that steering wheel has to go..    Sooo  while I was pulling those extra wires out I noticed some ground wires we forgot to attach ! 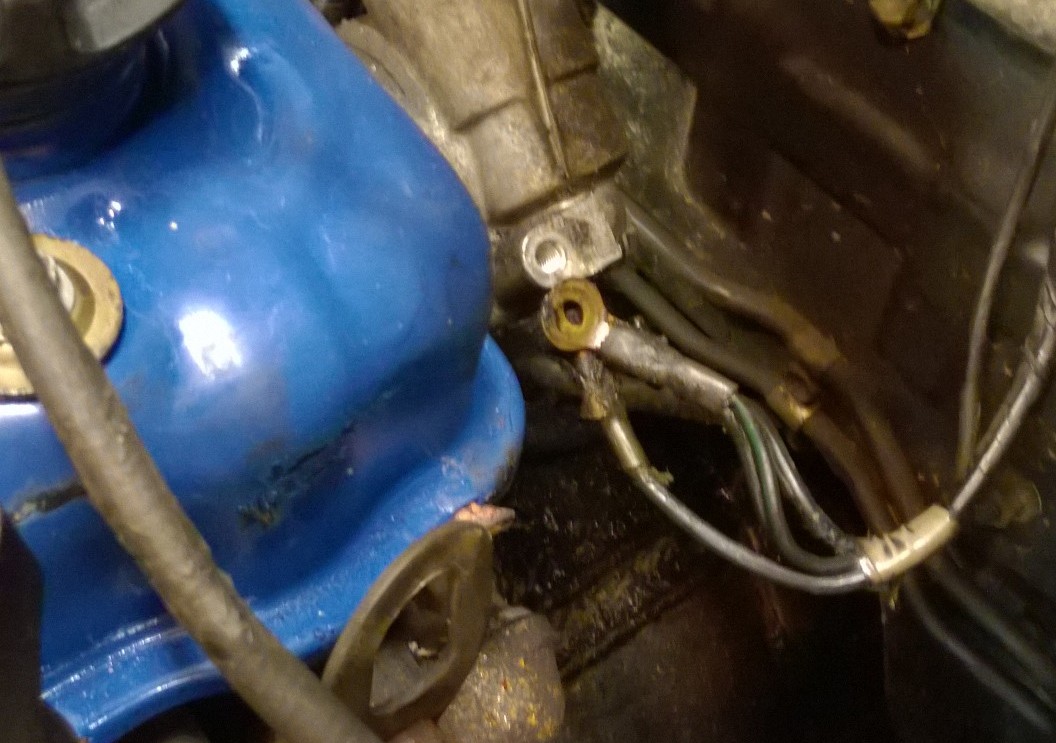 Oh No ! could these be the cause of all the grief..  quite likely.  We’ll see once I get the dash back in..  speaking of.. 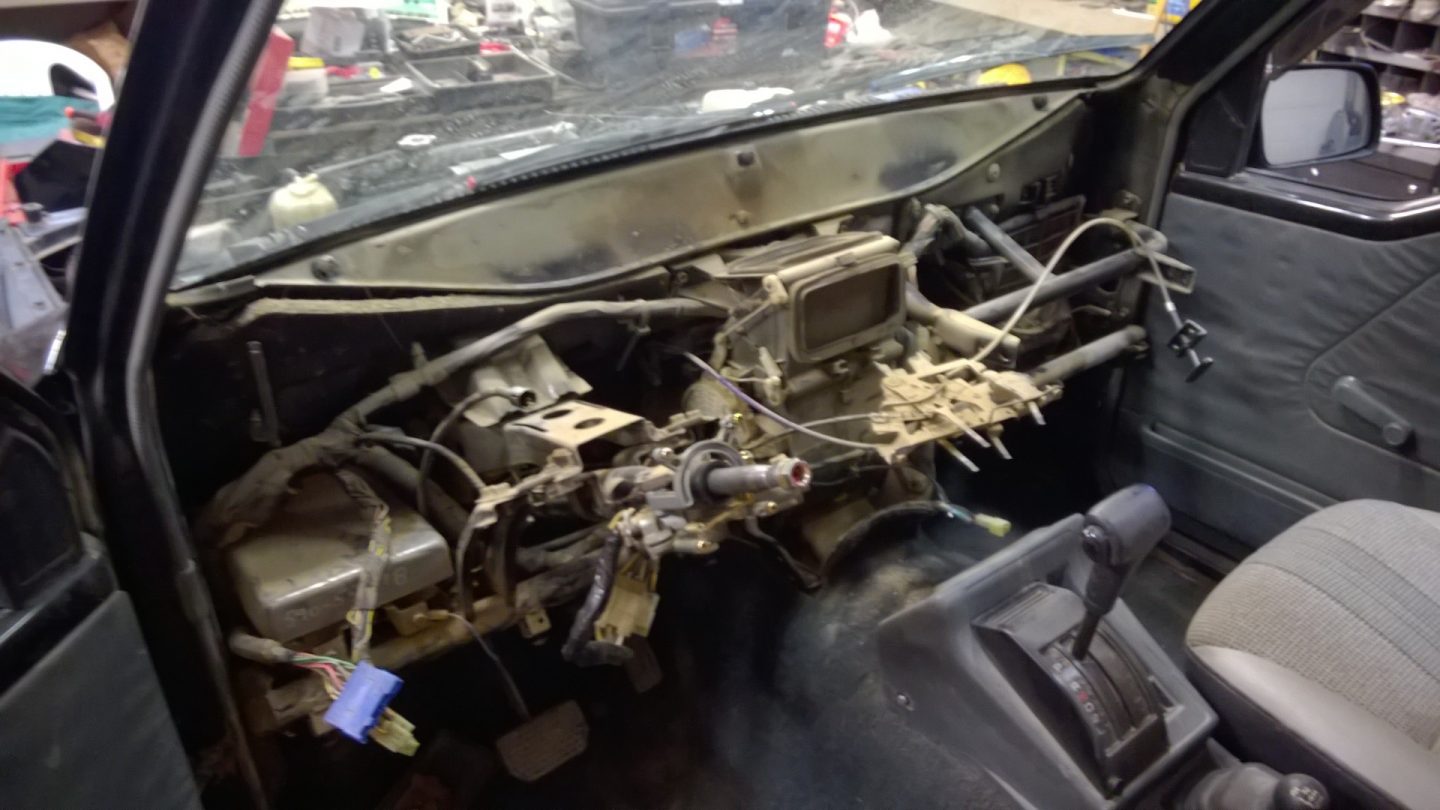 What a dusty mess..  Air hose & shop vac needed for this.   One very promising thing was that none of the screws holding the dash were rusty or stuck..  This I is a good thing about the hard top vs the soft top..  less moisture gets in.  and the interior stays nice.   A while back when I was taking things apart on the 89 parts Sidekick,  I cleaned the dash and all its bits.  So that one is going back in.. was my plan anyway.   One other thing was to compare wiring harnesses to see if things like a tachometer and the rear window defogger switch were exchangeable.  Yes they are.  Both harnesses have the wires.  I’m thinking of using the Sidekicks instrument cluster because it has a tachometer. 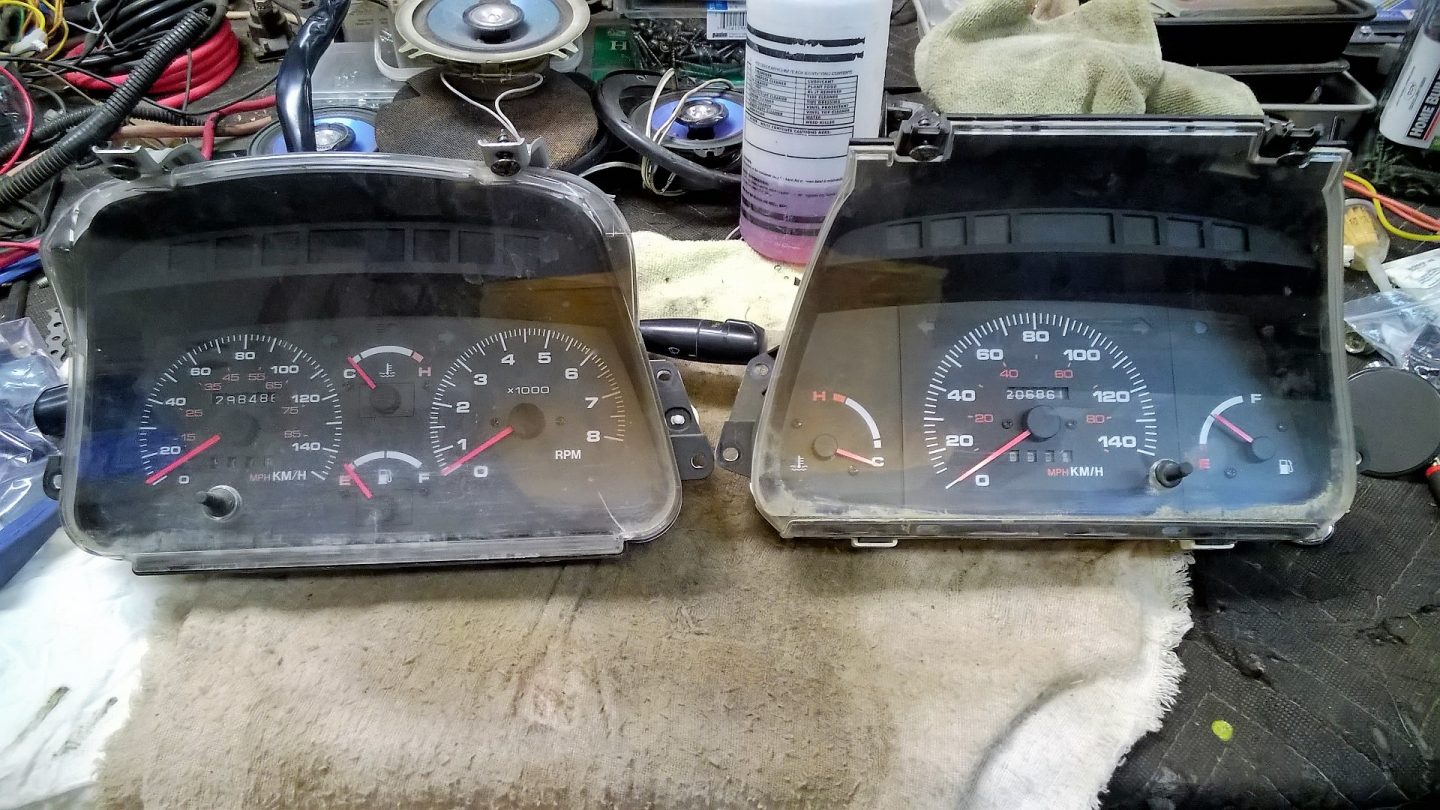 The Sidekick on the left .. and the much more modest Tracker on the right .  But the Sidekick ODO has an extra 90 thousand kms !  So need to think this one through.  In the meantime I got to the cleaning of the dash area..  While doing that I noticed a black box attached to the fire wall hiding behind the ECU..  It’s plugged into the main wiring.. and it says Suzuki on it.. ??  oh well must be important..  Can’t find it on the wiring diagrams though. 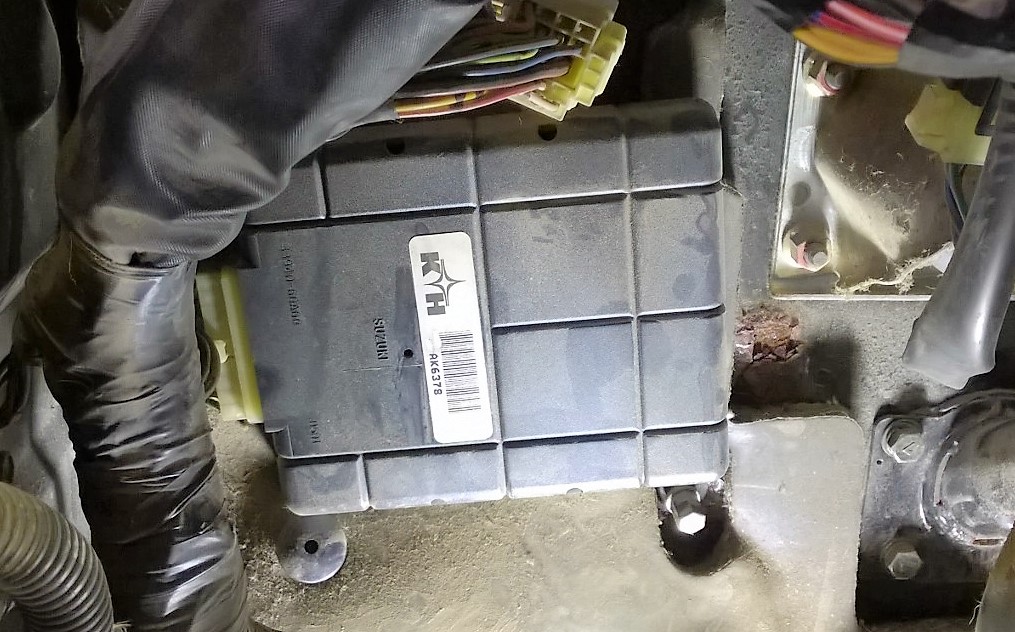 Mystery Box..   Looks like it belongs.. and it’s not part of the remote start.. so it stays.   Later I found out that this is the anti lock brake control module.  Another bonus I think !

So I’m in the middle of getting the new dash ready to install..   thinking about adding a clock , USB charge ports.. etc..  And Dave shows up and fixes the  unattached ground wires..  says to me “it will run without the dash” ? right ?  Uh ya I think so..   So I turned the key.. and we could hear the fuel pump !  Wow.  Turned the key more and boom she starts right up..

After the smoke cleared ( from oil and cleaning the motor)  I took a quick video..   Needs work on the water pump..  there is a noise coming from there..  and a coolant leak.   But !  We have a running Tracker instead of one you push !   That’s progress.  Now I need to get the dash back in.   But I must do a little pimping to the dash.. 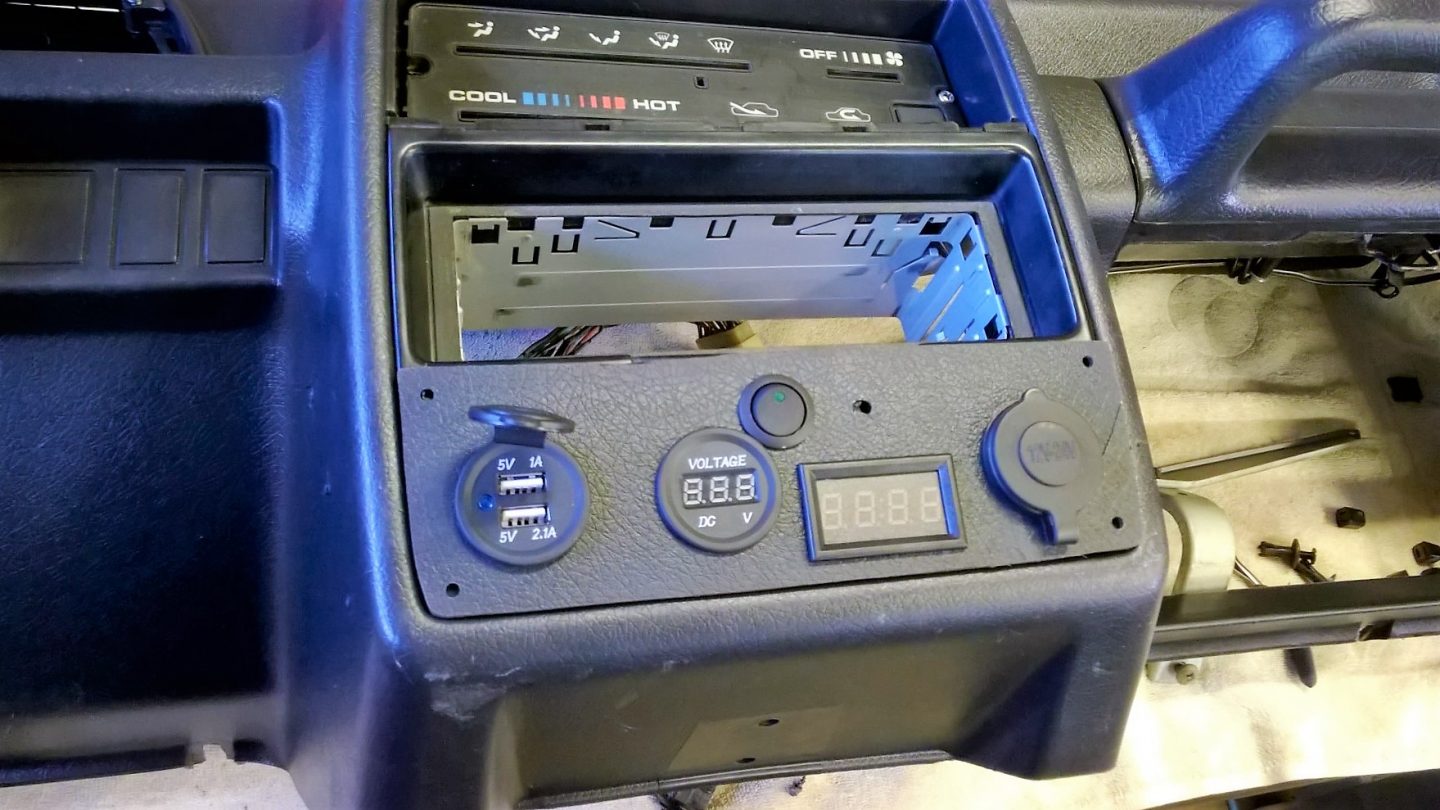 The dash is all together and in.. everything works fine.. 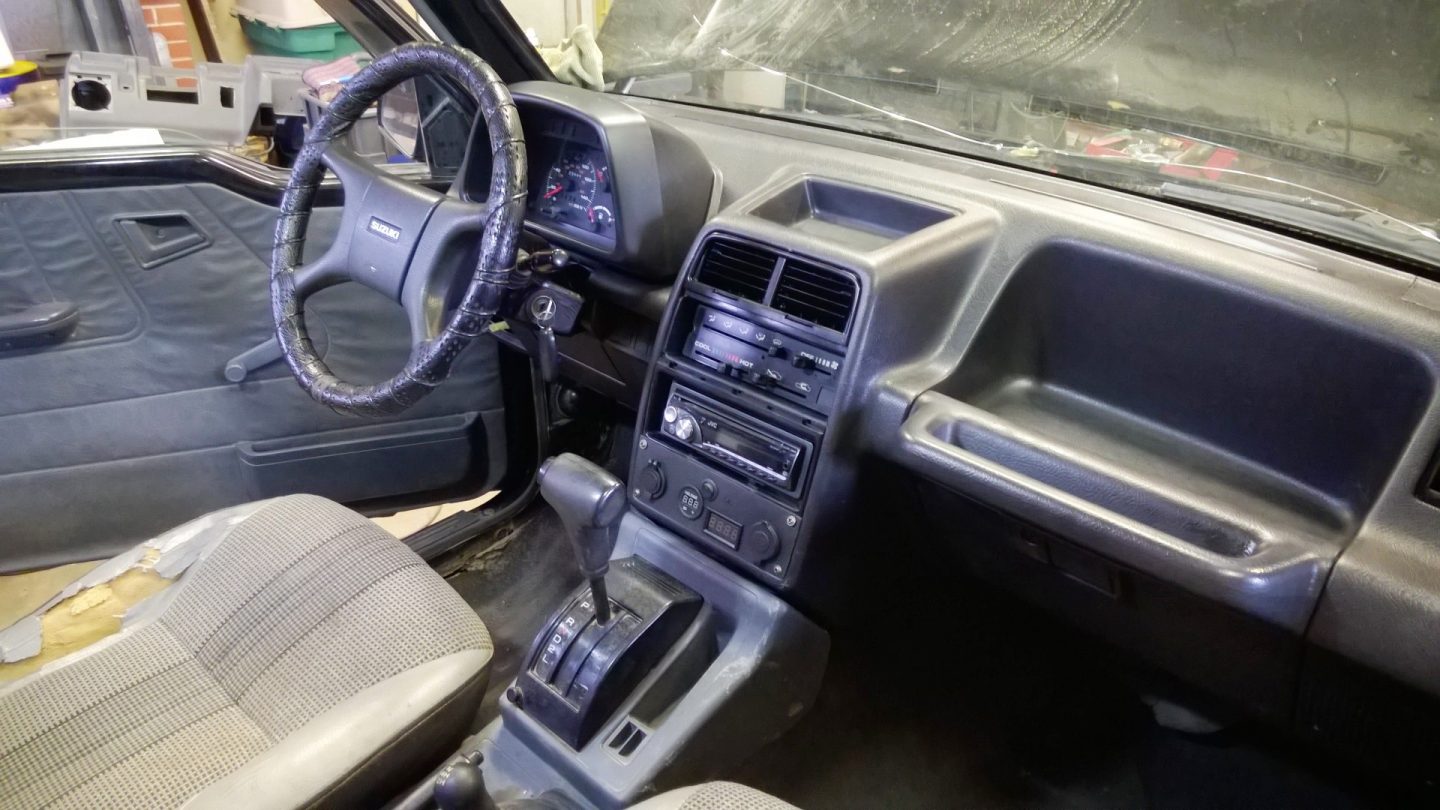 I now have a Trackerkick.. or is that a Sidetracker ?   We ran the motor a bit today as well..  Trying to find exactly where the coolant leak is..   I still think it’s the water pump gasket.  But the motor runs well..  The lights on the dash go out like they are suppose to..

And it was the water pump gasket. We installed a new off the shelf water pump ( cause it was cheap) and no more leak.   Backed it out of the shop.. and let it run to warm up good..  No problems.  Yahooo   So now to put some stuff together again.. 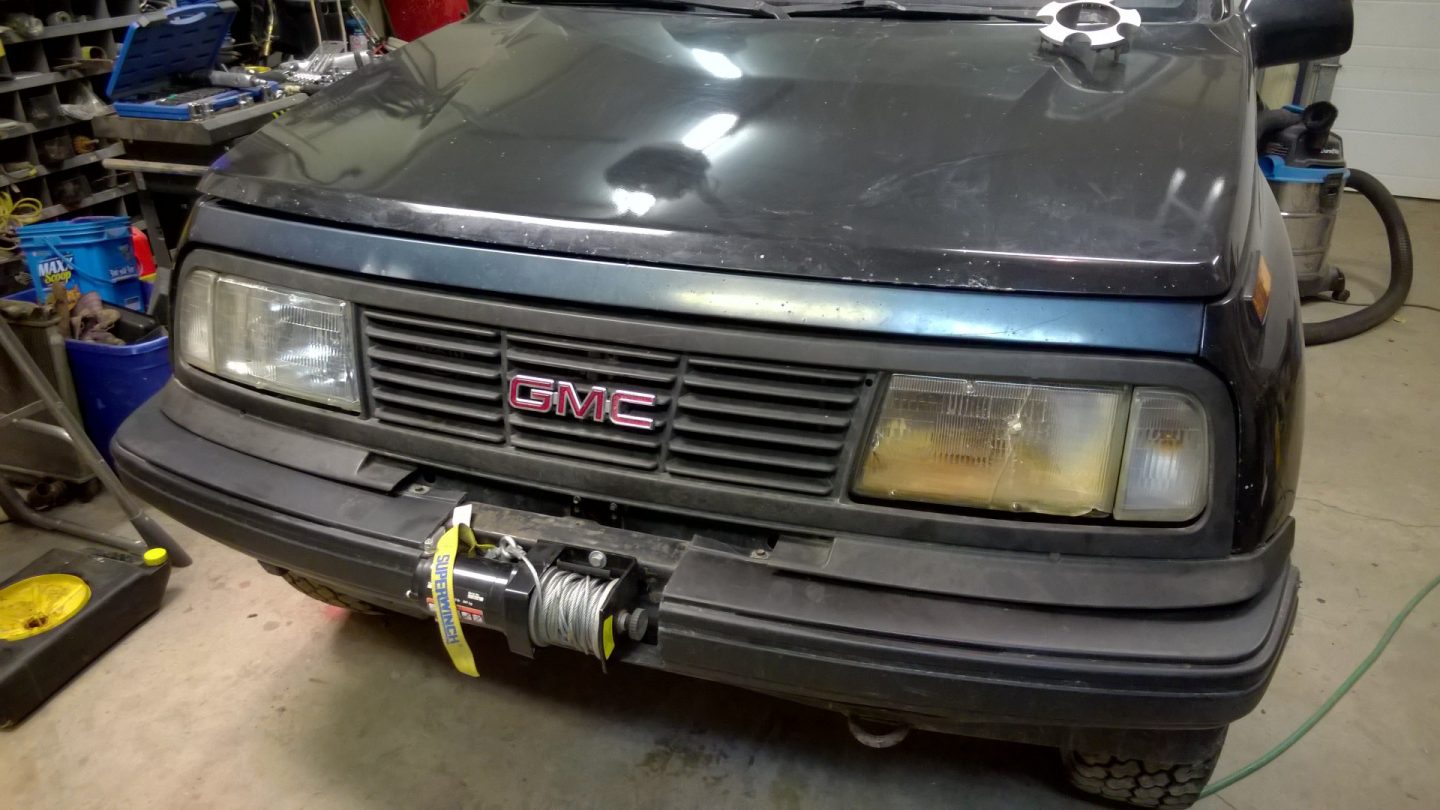 and we start with the grill & the top frame.  Notice the blue ?  that’s a piece saved from the 89. It was in better condition.  So I cleaned and painted the backside.  Still looking for a headlight.. 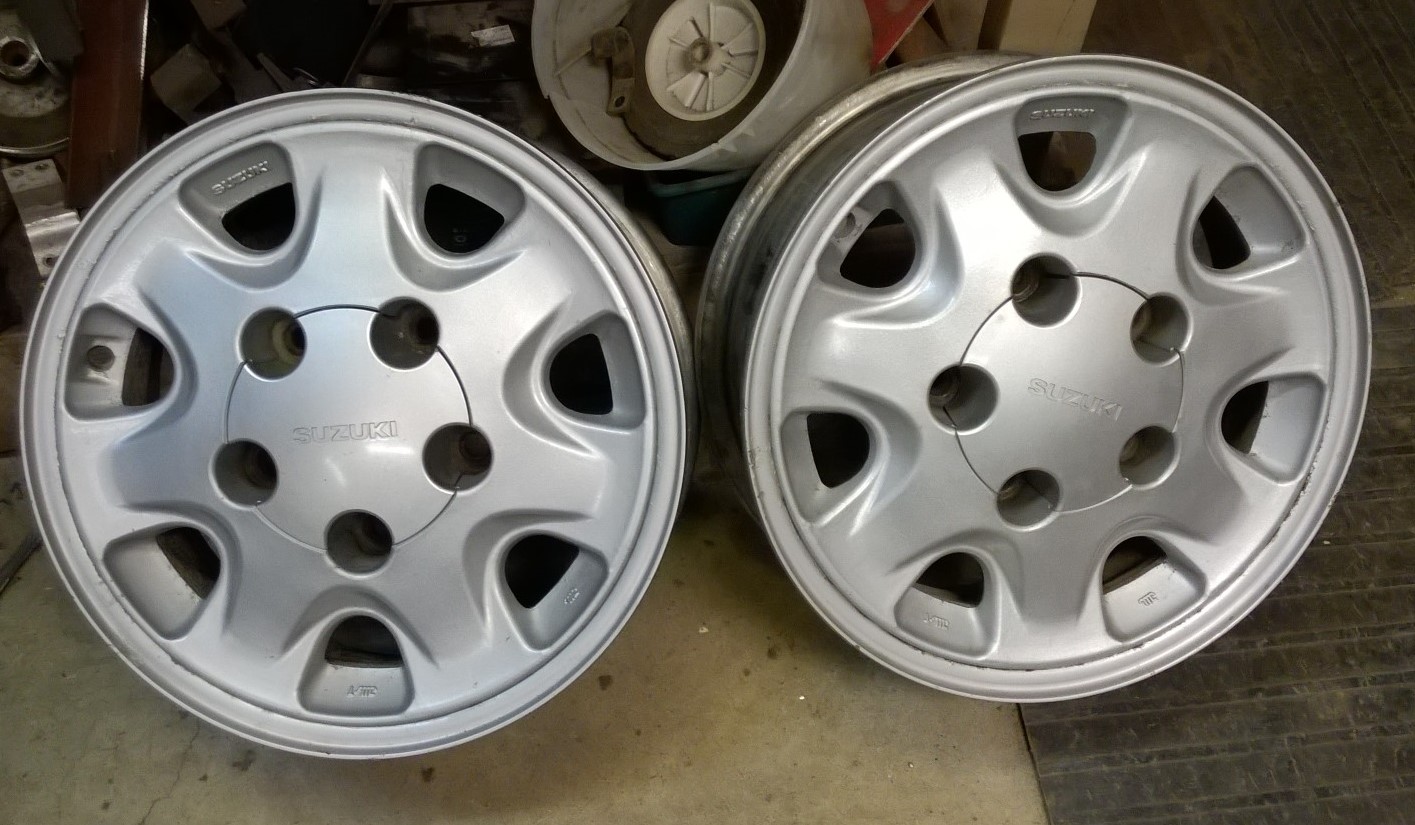 Here’s two of the Suzuki Alloy wheels I horse traded for..  I have five. So the spare will look good without a cover.  The plan is to remount the tires that are on the Tracker onto these rims.  Then we are styling!

The plan here is to get the Tracker road worthy enough to drive it around for a few weeks.  I really want to make sure we have fixed all the mechanical things before any body work is done.  So here’s what I need to do:   1 –  Install a tail pipe so the exhaust is going out the back , not under.   2-  I need to repair a few rust holes in some important places where road crap can get inside.   3-  The tailgate handle needs to be cleaned, painted & installed.   4 – And as soon as it’s on the road..  an oil change and the coolant replaced.

I’m trying something new to deal with the small rust holes.  These are holes that aren’t seen because they are covered or under the hood.  I clean them up and treat them with Naval Jelly.  It converts the rust and after 24 hrs hardens to a paintable surface.  Then I’m going to glue & screw a patch over the hole.  We’ll see what I think when done. 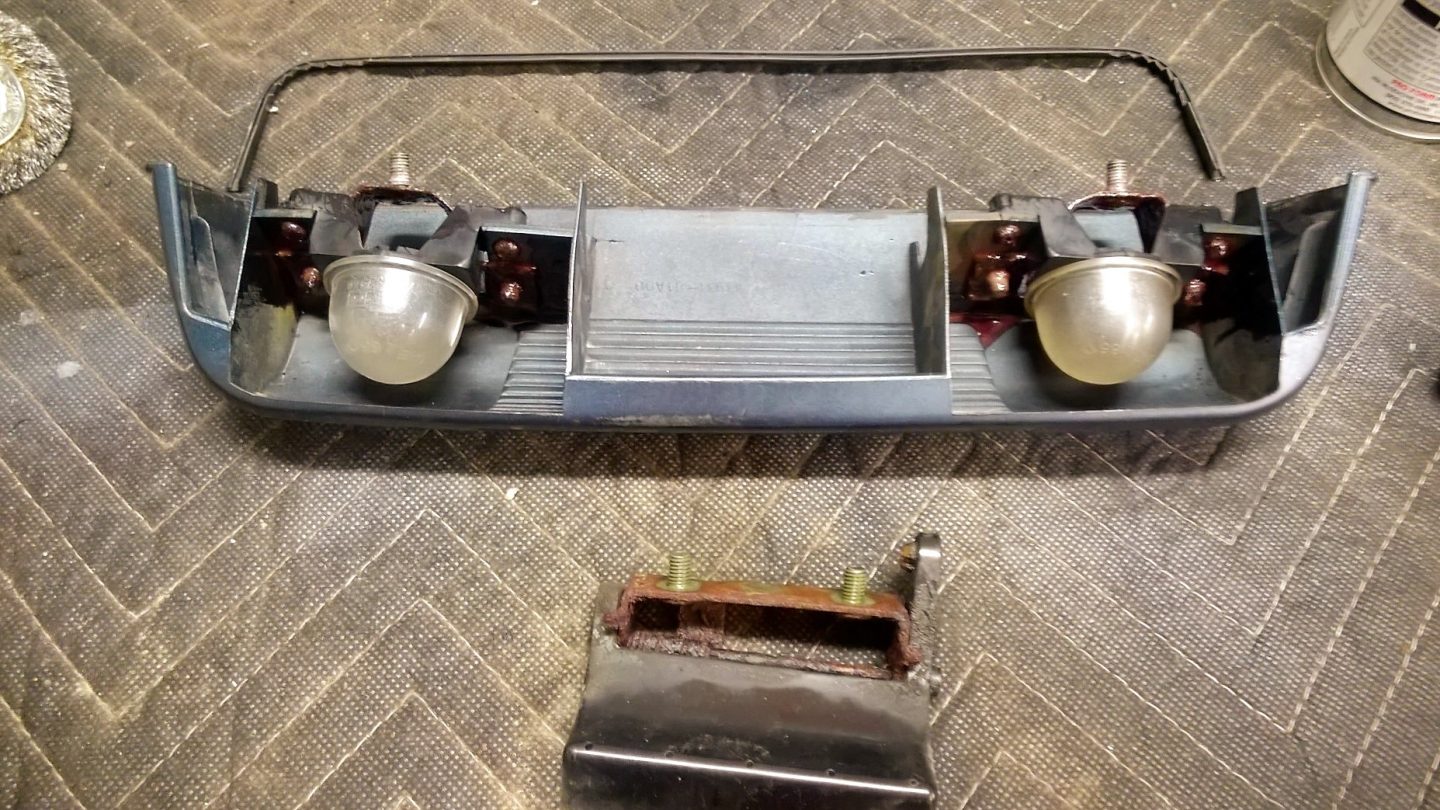 This is the tailgate handle from the 89 parts Sidekick.  Even though the metal bits are rusted, they are still strong.   So I’m using the Naval Jelly treatment on this as well.  And yes it seams to work good..  Why rebuild the black one when this will work. 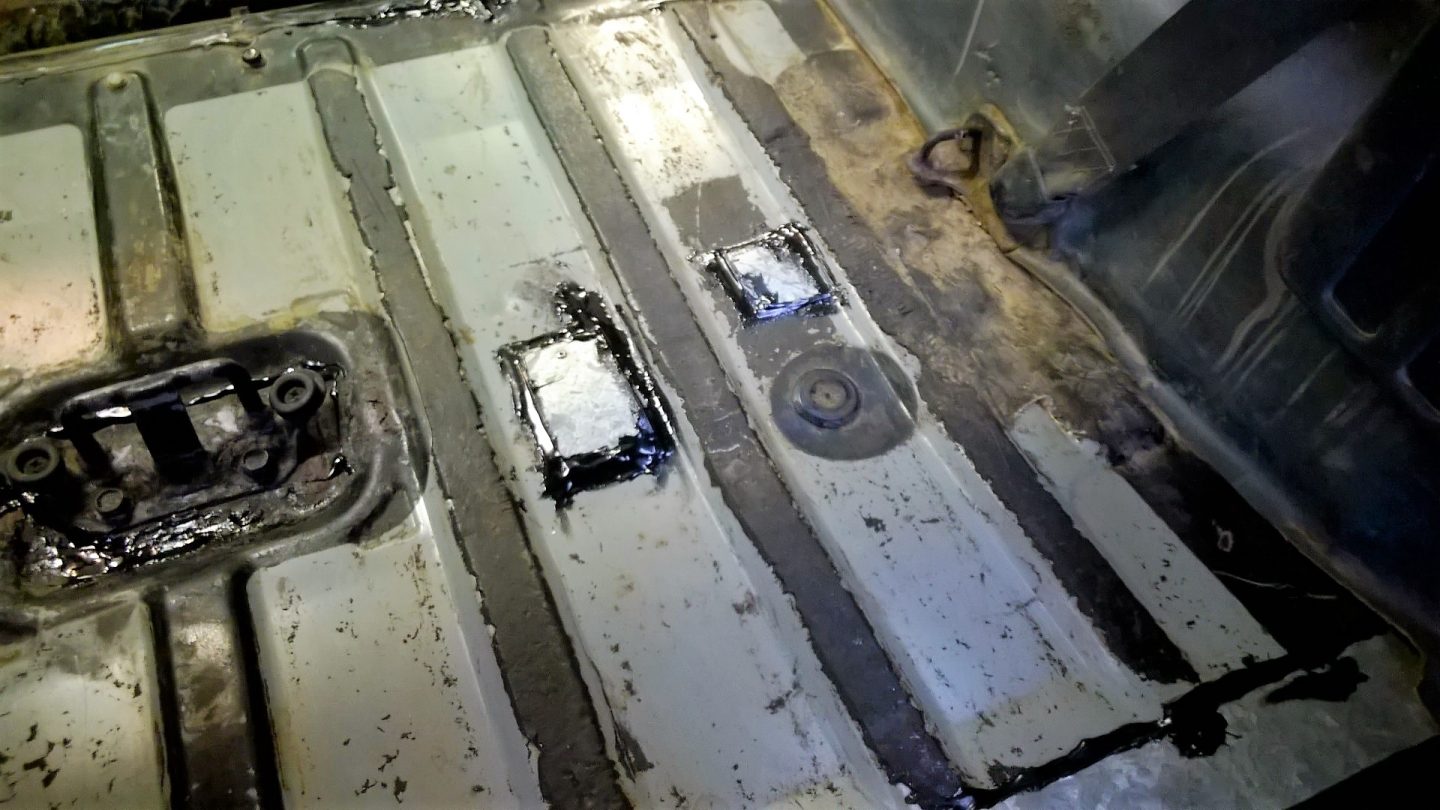 Here in the back seat area I used the rust jelly..  and then I made patches from Galvanized Steel.  Everything is sealed up with urethane sealer.   Later I will paint this area with box liner epoxy or undercoat..  Later. 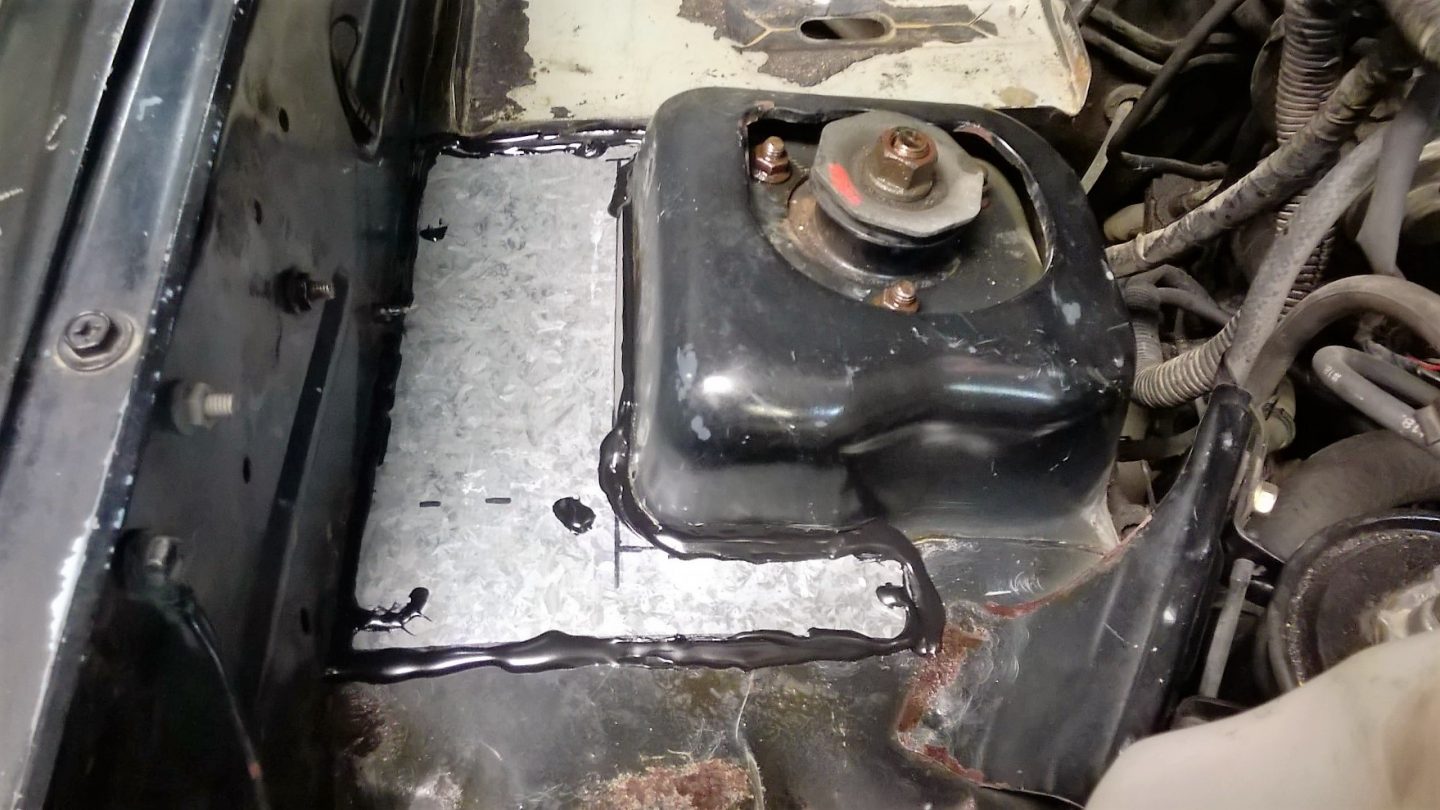 This is one of the motor compartment patches.  On the other side is a smaller one.  When the inner wheel well is undercoated I think this will last a long time..   With holes here the tires throw water and mud into the motor compartment.. Not good !   Just about ready for the road.  Time for a new page…