There is now 8 pages to this post. Here are the links:

Once again it looks like I’ve got a collection going..   Once again I’ll show you a photo of what it should look like ..

JUST KIDDING !   but it could look like that..  with a 4 inch lift and some red paint !   More importantly the photo shows the removable hard top.  I like that better than the soft top..   Especially for winter. 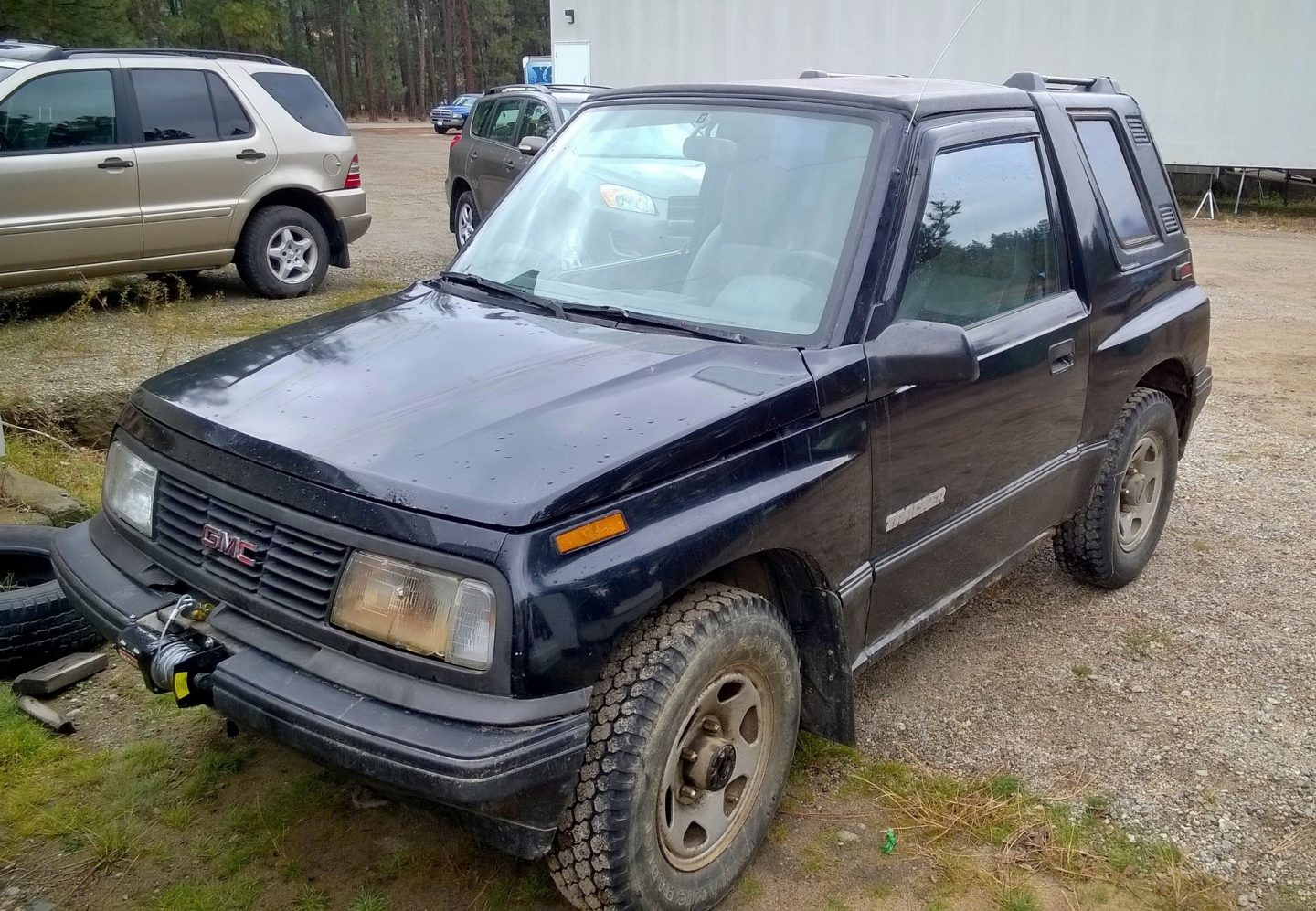 Here’s the actual one I picked up..   Needs some work..  they all do..   Now Trackers and Sidekicks come in a few different configurations..   The other two I had were convertibles with soft tops.  I like those.. but this one comes with the much desired removable hard top..  Now I think I like that better.   So we will tick a box.  Another good thing .. for me is the auto transmission..  so lets tick another box..   Oooo  power steering too..  Yes one more box.    Once I install keyless locks.. it’s perfect.  In fact if I was to order a Tracker from the factory, this is the way I would want it..  Just not Black.    Well back to the real world.. got to fix the motor first .. and patch up some rust..   A new paint job would be nice..  The 96 Siidekick will have to go bye bye..  as is or for parts..  All depends on weather ICBC will give me the regi or not..

Now I’m no stranger to fixing these.. check out this old post from 2007.  that’s 8 years ago.. but I remember it well.. and have a look at how nice it looked when I was done.  Well I want to do that again..  But I think I’ll not bother with the power windows.

Lets have a look.. 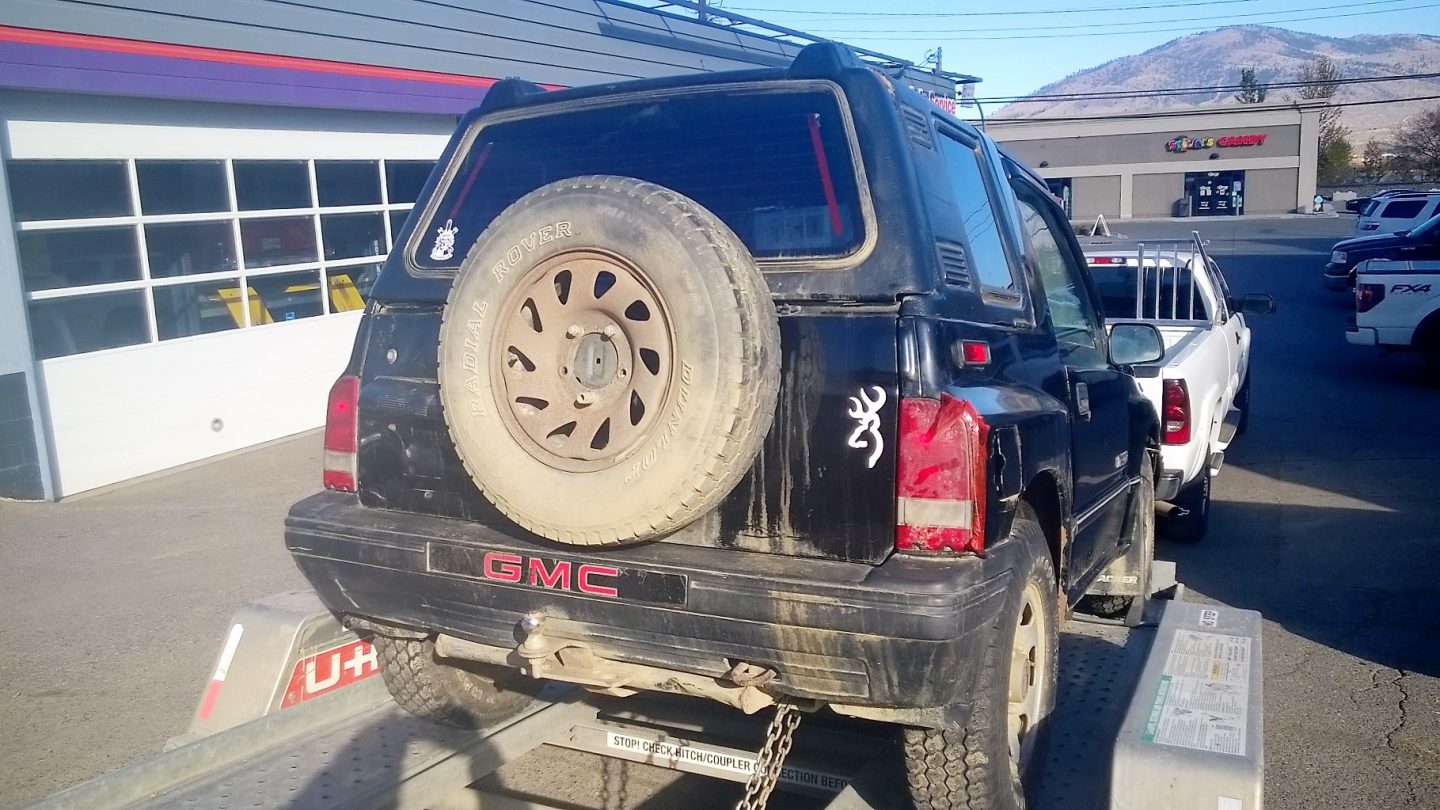 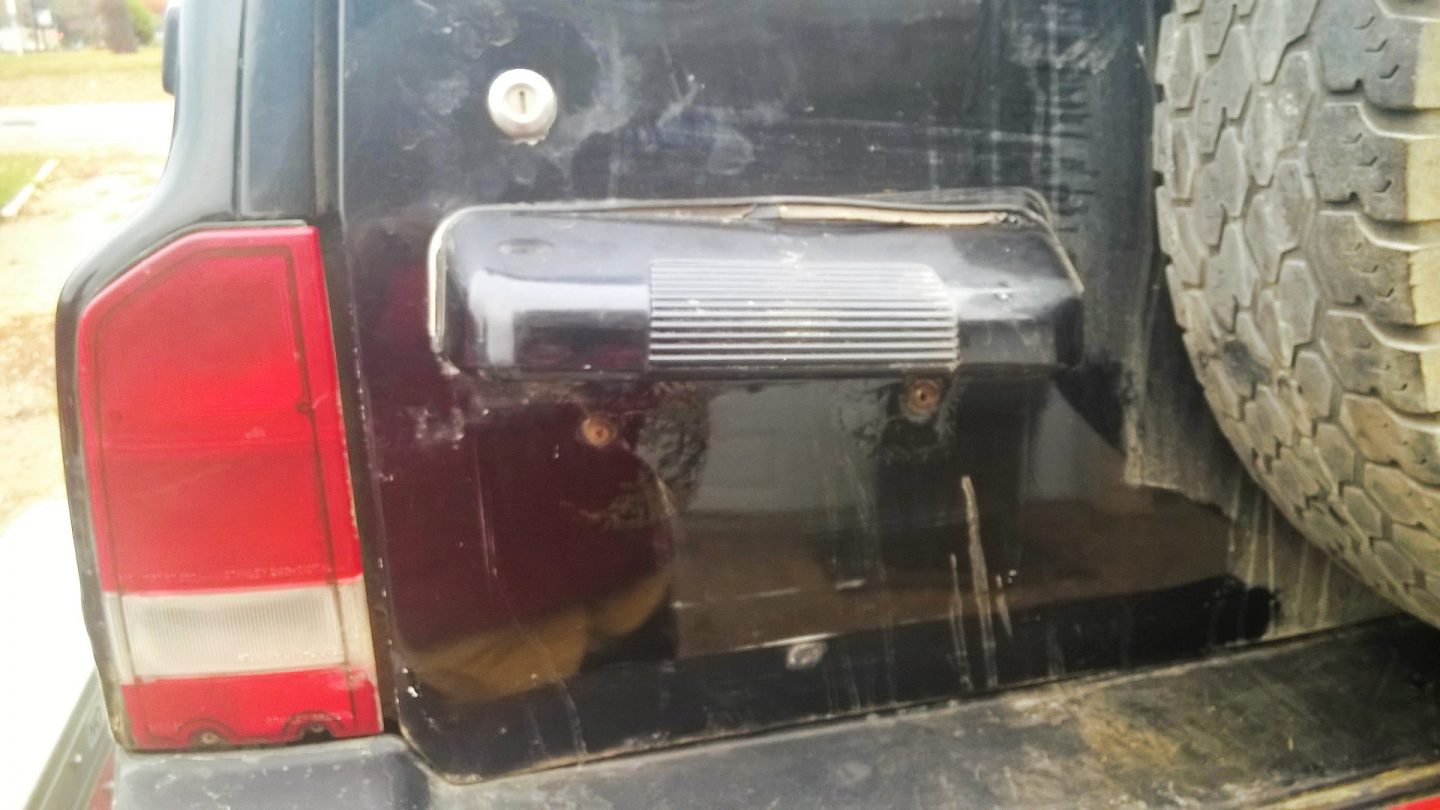 Ahh but the handle is falling off..  I bet the mounting bolt is rusted off.. I fix. 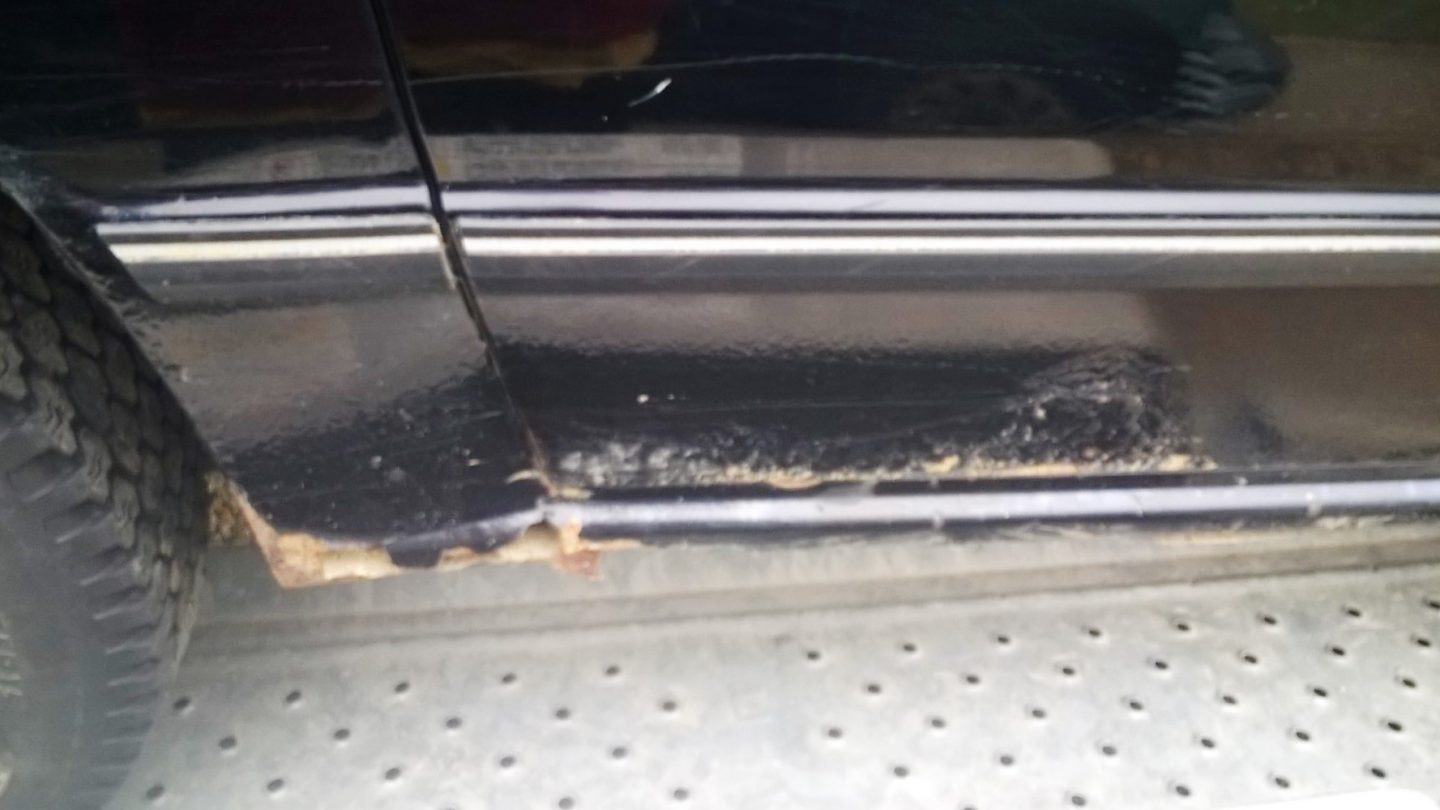 Rusty rocker panels.. this is the good side ! 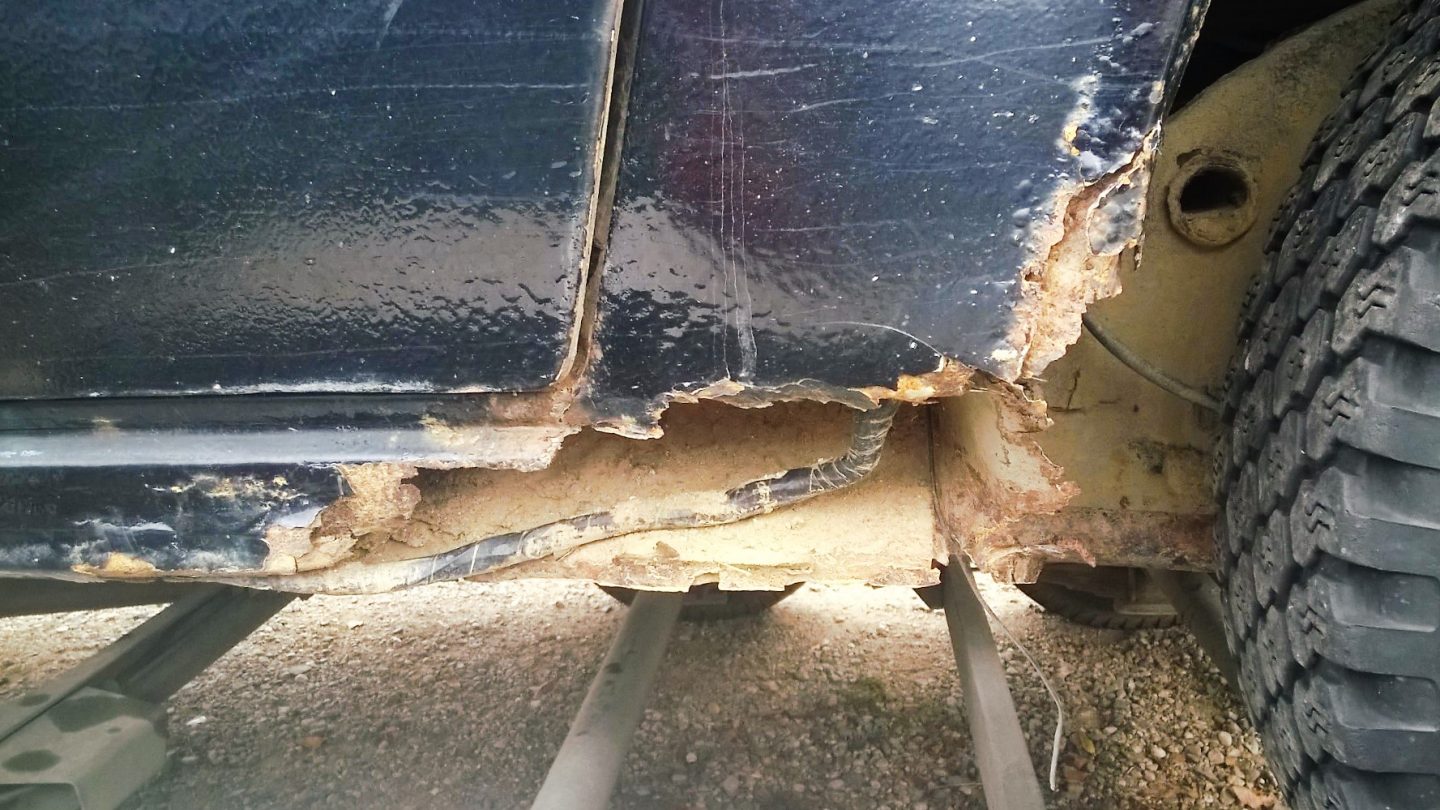 This is the drivers side..  bad..  but common.  some metal working required for this..  The door skin has come loose too.. but I’ve fixed those before..  none of this scares me..  I’m crazy.. 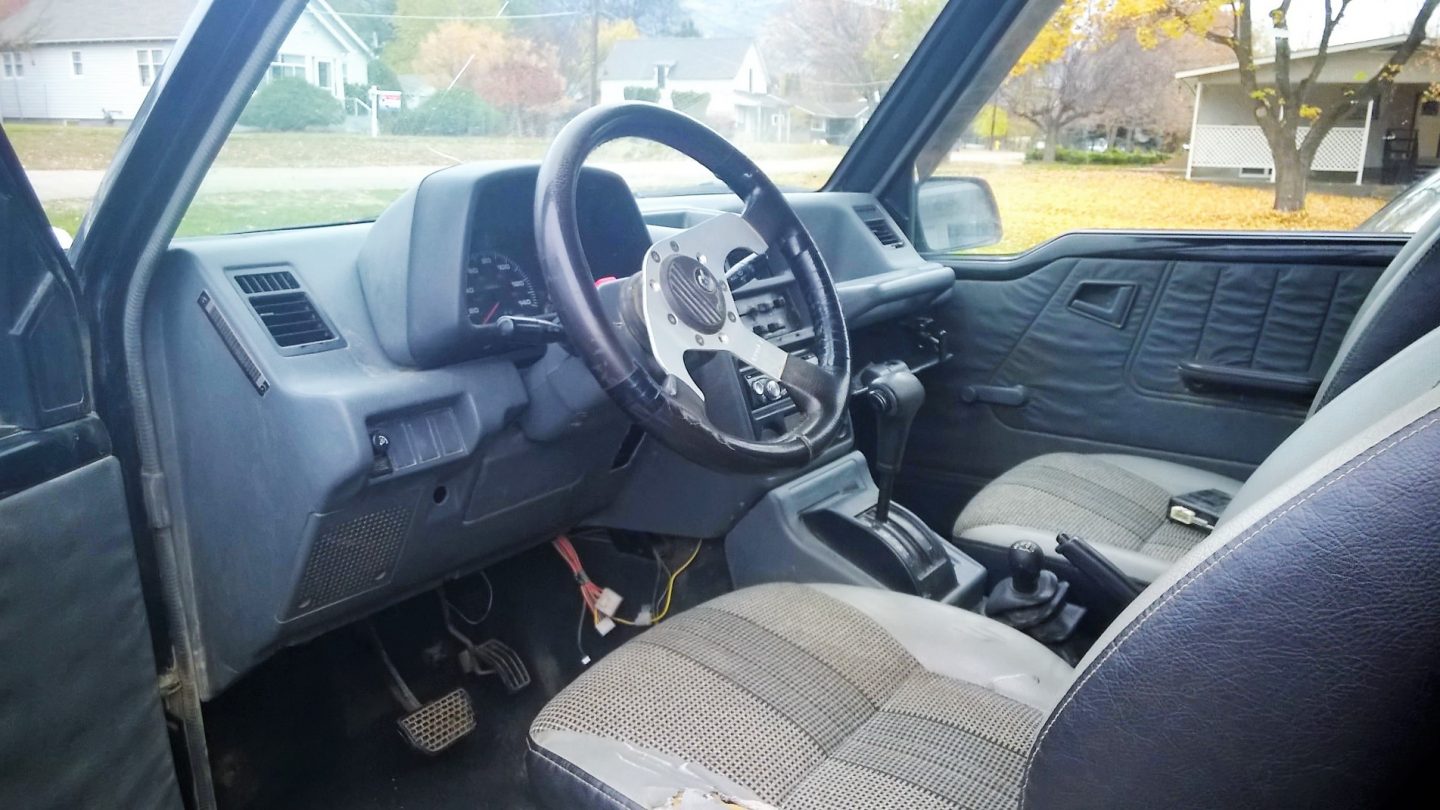 The interior looks OK..  just OK.. the drivers seat has rips.. that steering wheel is ??  weird..  There is wires hanging out from where the remote start was..  And I’m not a fan of those unless they are factory installed.    Most importantly no dog has chewed or drooled , or even left hair on anything.  In other words it’s normal dirt. 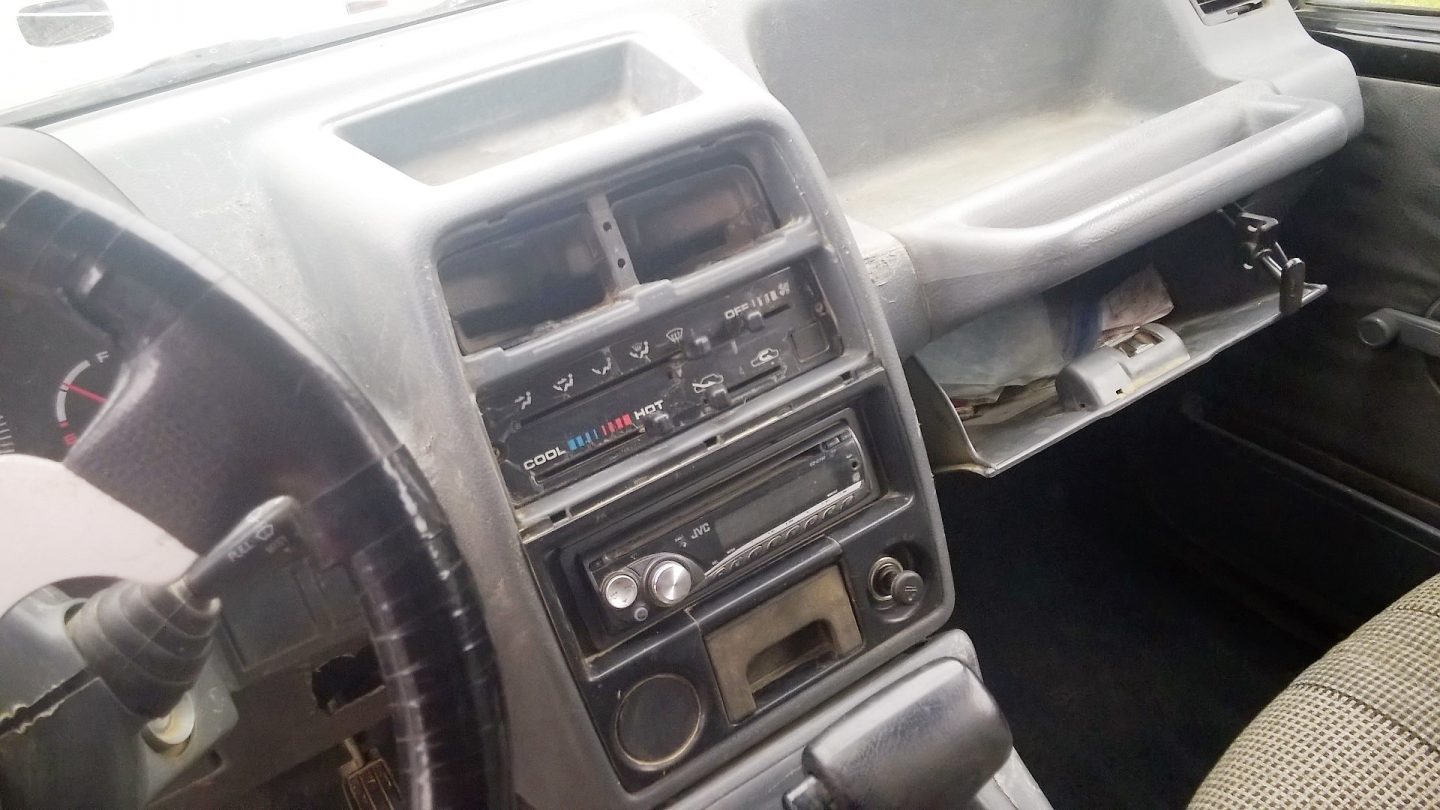 Ok bonus !  There is a newer stereo.. with a key fob remote.. that doesn’t work!  But where’s the vents ?   In the parts Tracker.  I hope.   An Ash tray !  yup they still thought is was a good idea 20 years ago..  Just watch that disappear and a USB charge port in its place. 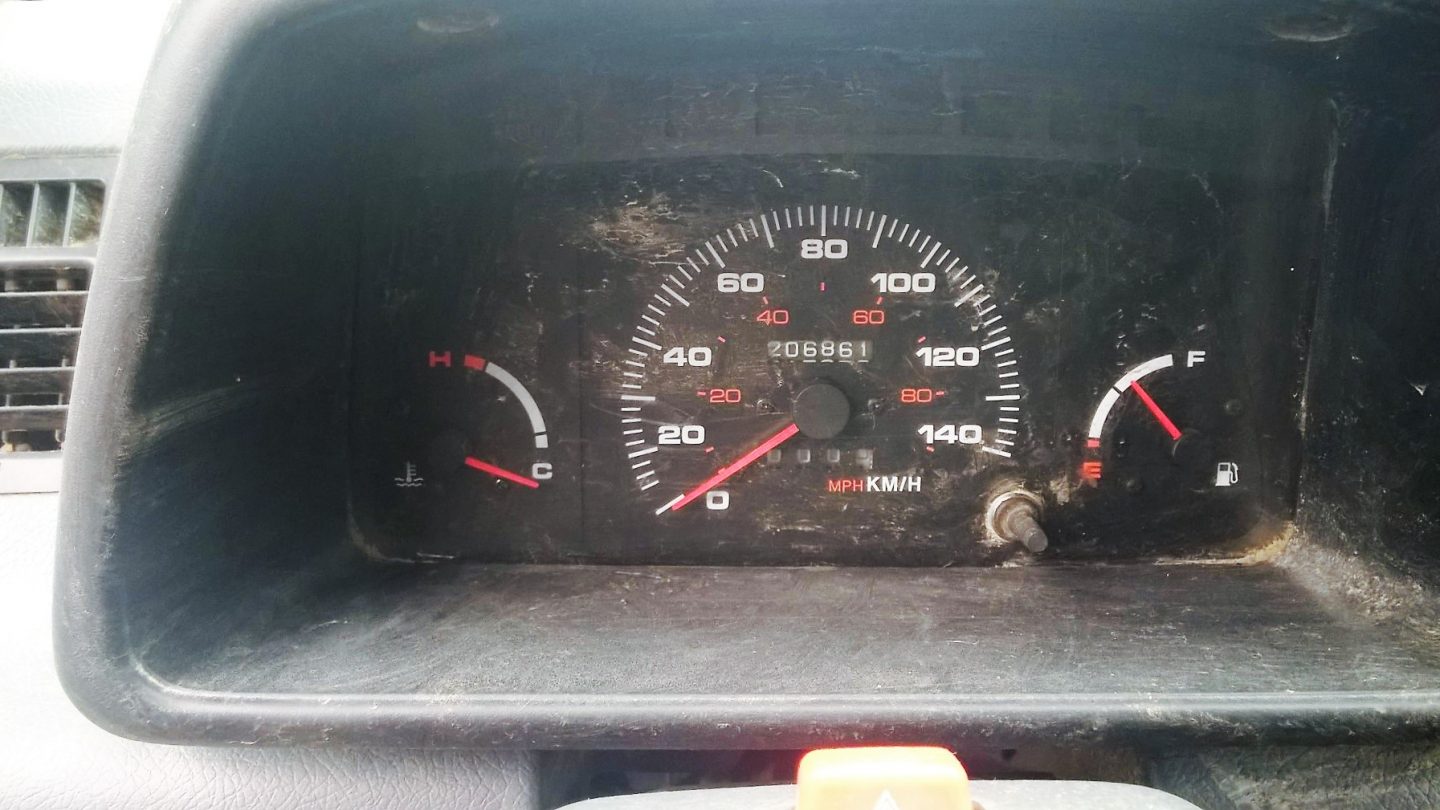 Bonus #2..  the lowest kms on any of the Trackers I’ve seen..  206,000.   So to me this all adds up to a good Tracker to make nice again..   I found a place to get new body parts to replace the rusted and or missing bits.  If I can’t make my own.  Welding in new metal is the only way to make it right.. and last.   Once the mechanical stuff is fixed up then we’ll see what the budget allows for.   so off to Linde Auto for the motor work. 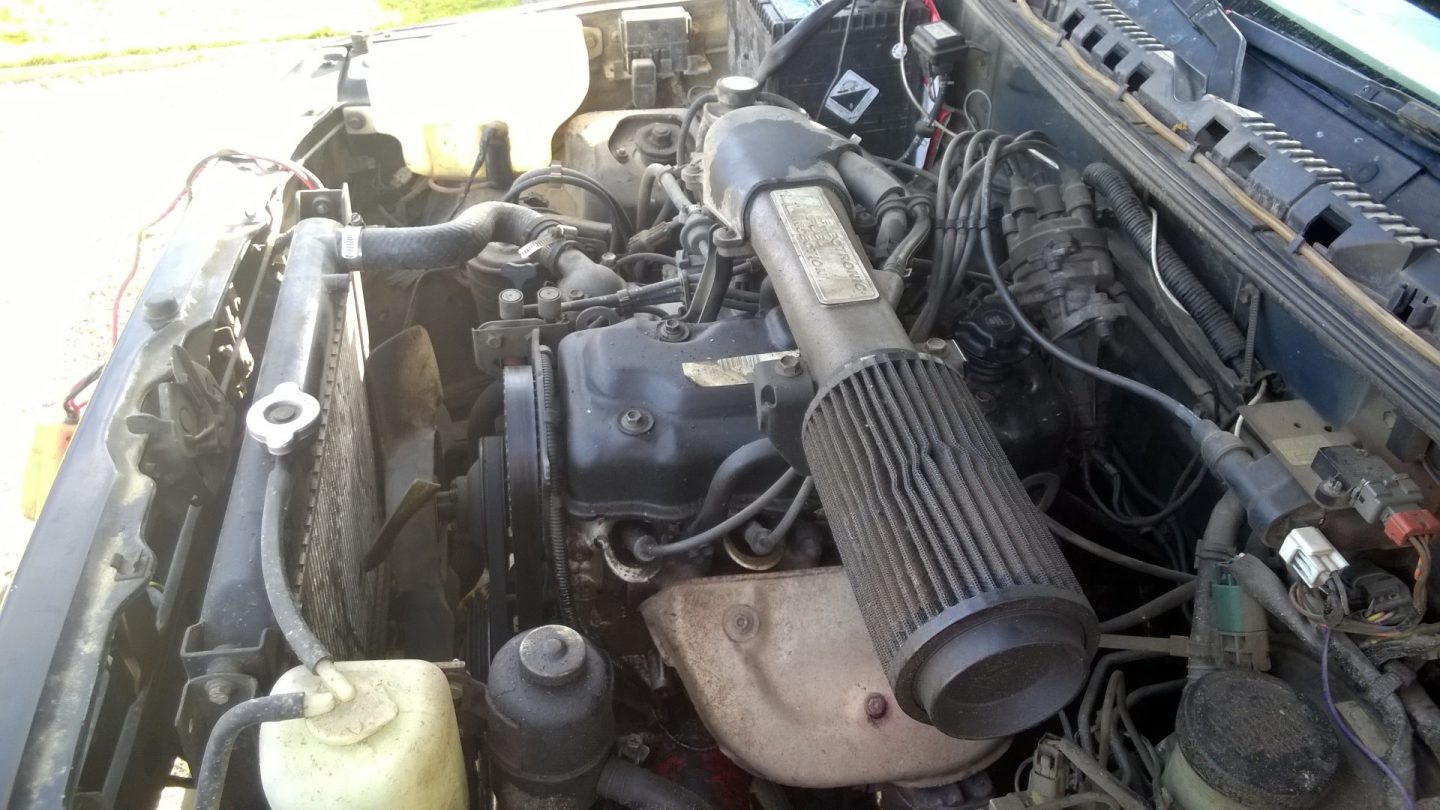 Before it left I washed the motor down.  And some of the dried on mud.  I also removed the back door handle to see what was broken.  Sure nuf one of the mounts was gone..  So it’s strange that the mount rusted away to nothing.. and the latch is still ok.  hmmmm 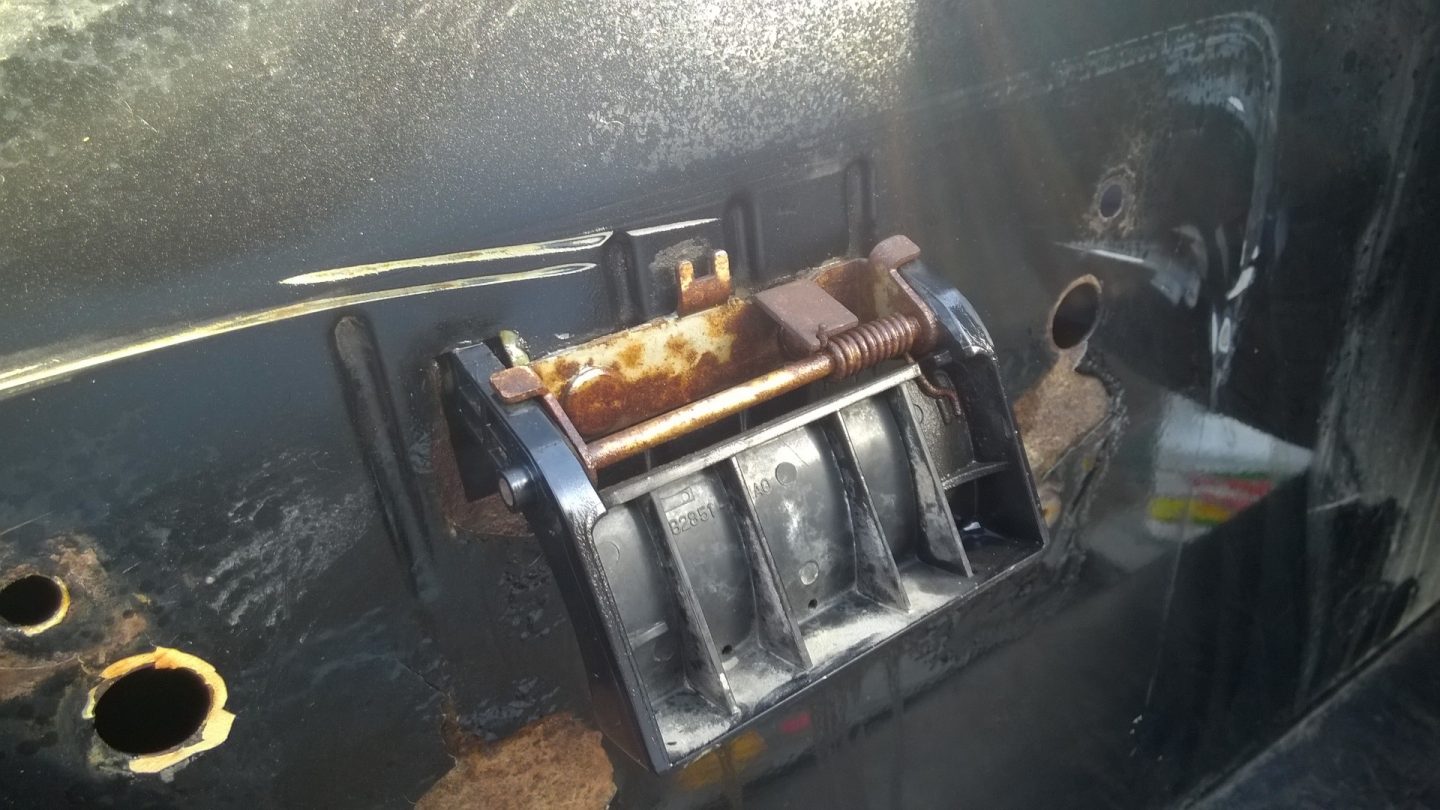 Here’s the latch..  way better condition than the one on the 96 Sidekick ?  Missing is the handle / license plate cover..  I’m rebuilding the mounts in the shop.  When the body work is being done the latch is removed as well.   On the 1989 Tracker I rebuilt  I painted the handle satin black and installed it after the body was painted.  Same with the door handles.. 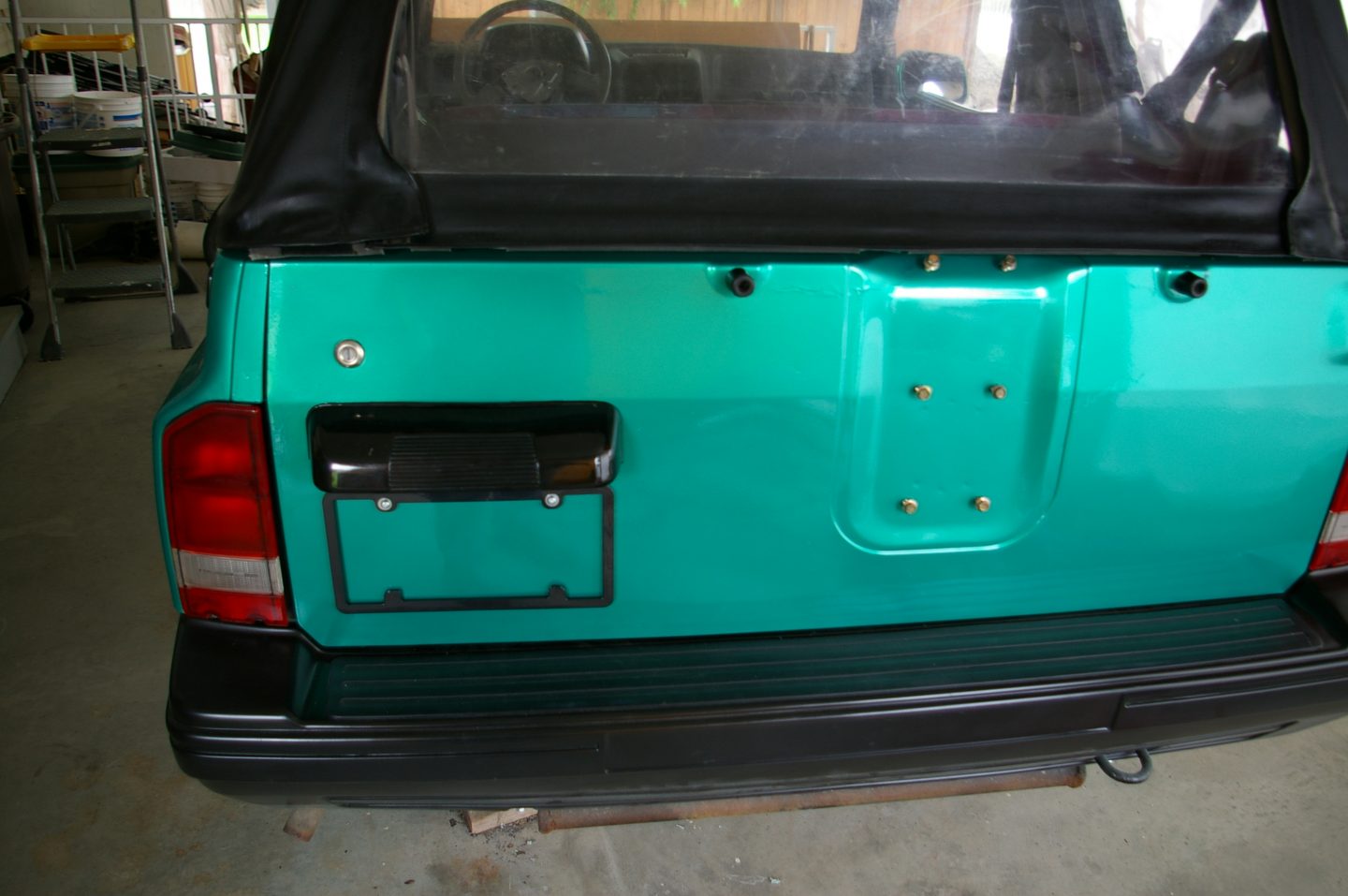 Pretty nice eh..   I would like the same look but with a blue similar to my Polaris 400.   It looks good blue & black.

The start of the motor wows..

Today we rolled the 91 into the shop and checked out some things..  First thing was a compression test on the four cylinders.  They were all low.. but consistently low.   Then we removed the valve cover and checked the cam and lifters..   All is good no loose stuff.   However it seams to the trained eye that the valve timing was 180 degrees off.  That would not help the compression at all..  We then went a little deeper and removed the timing belt.  well what we found was a loose drive pulley .. The very important one on the crankshaft..  It had enough play in it to throw the timing out anyway.. 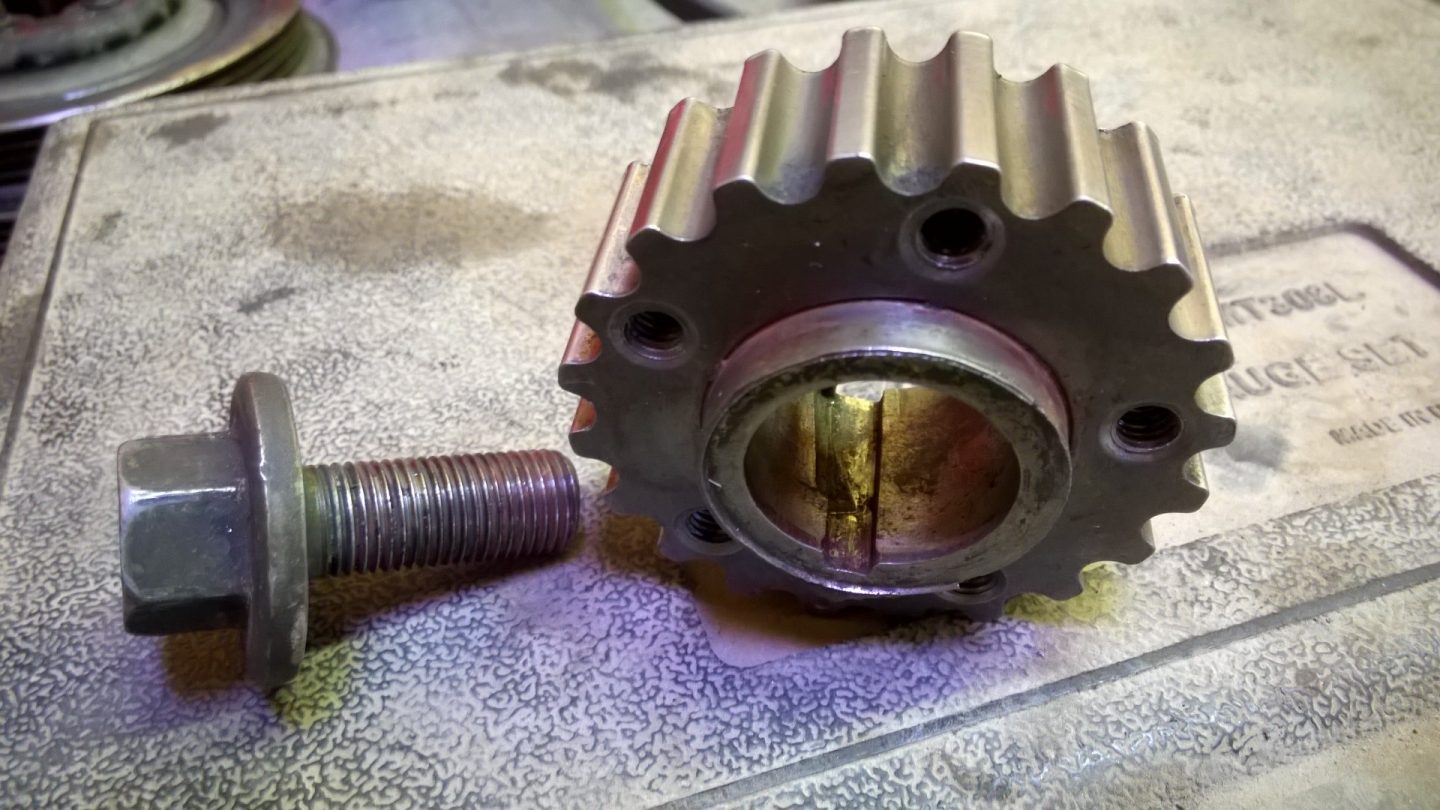 Here’s the little bugger..  If you look inside you can see that the keyway is widened.   I read on a forum that this is a common thing.. and that this bolt MUST be torqued properly.   So the hunt is on for one of these..   so far no luck.   Oh and just to be sure there are no other issues.. we ran a pressure bleed down test of the cylinders..  This test tells the truth about the valves..  It showed no problems !  yah !   so no need for a head gasket..  or a valve job..   So I ordered just a few things.  valve cover gasket, timing belt,  fan belt and new plugs.

Well I got the 1989 parts sidekick home and removed the motor parts I needed to finish up the 91.   The Timing belt sprocket was in perfect condition.. and fit tightly on the 91’s crankshaft.  And the rest went good to.. 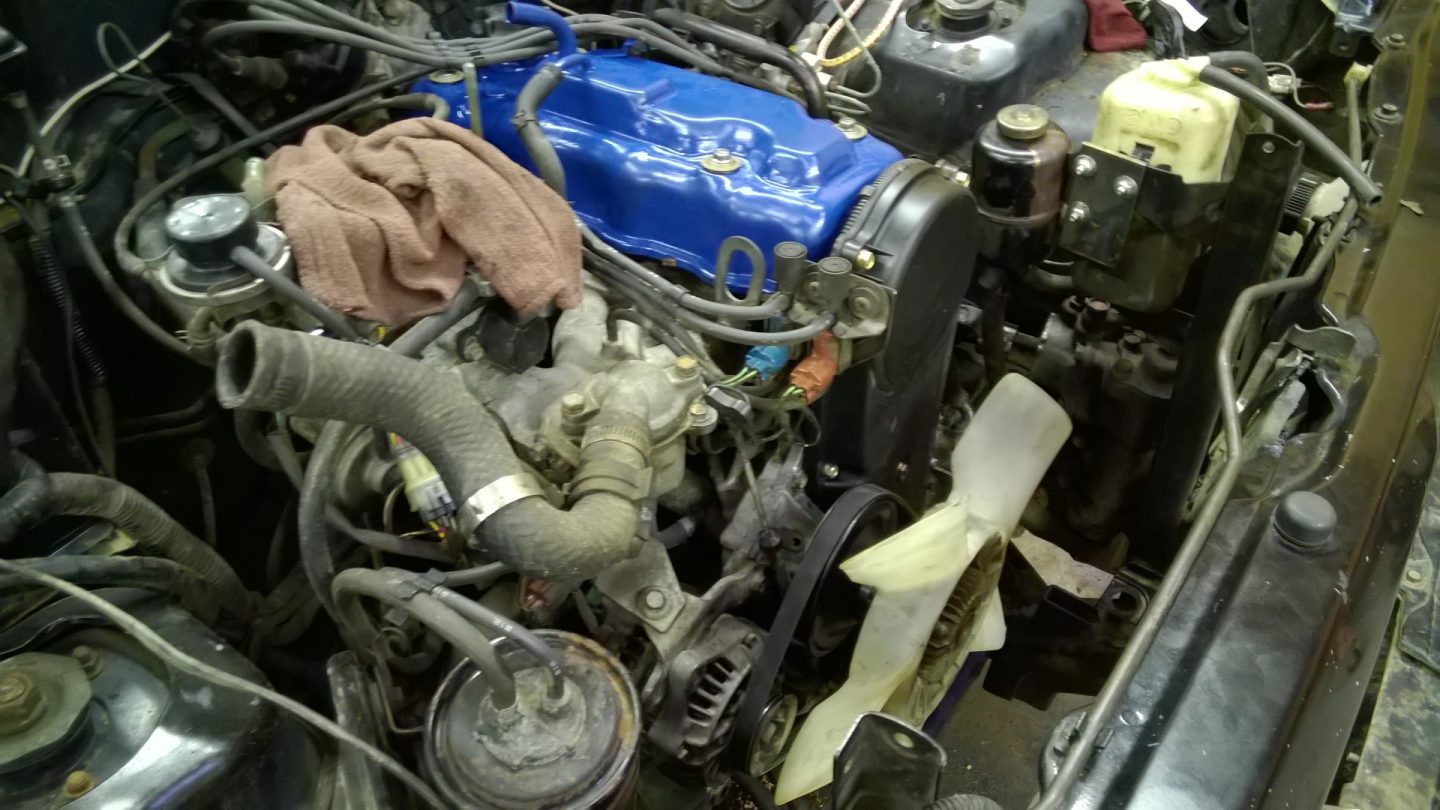 Just need to put the rad back..  and the air intake .. and we’ll see how or if the motor runs.

So before I got too much put back together.. I decided another compression test would be a good thing to do.  Just to make sure that all the things we thought were bad..  really were.  Well the test was a surprise.  And the compression was no better.  In fact very low.   So out came the air bleed down tester for another try.   And that’s when Peter realized that he had read it wrong..   Instead of a 10 % air loss it was actually  90%  loss.  This means that it is most likely the pistons and rings that are bad.   So that is bad news for the motor.   Fortunately the parts one has a motor too..  and supposedly it ran fine..  So we took the tester to the parts Sidekick and it passed with a real 10% loss in one cylinder and 5% in the rest.  very good..  So   MOTOR SWAP ! 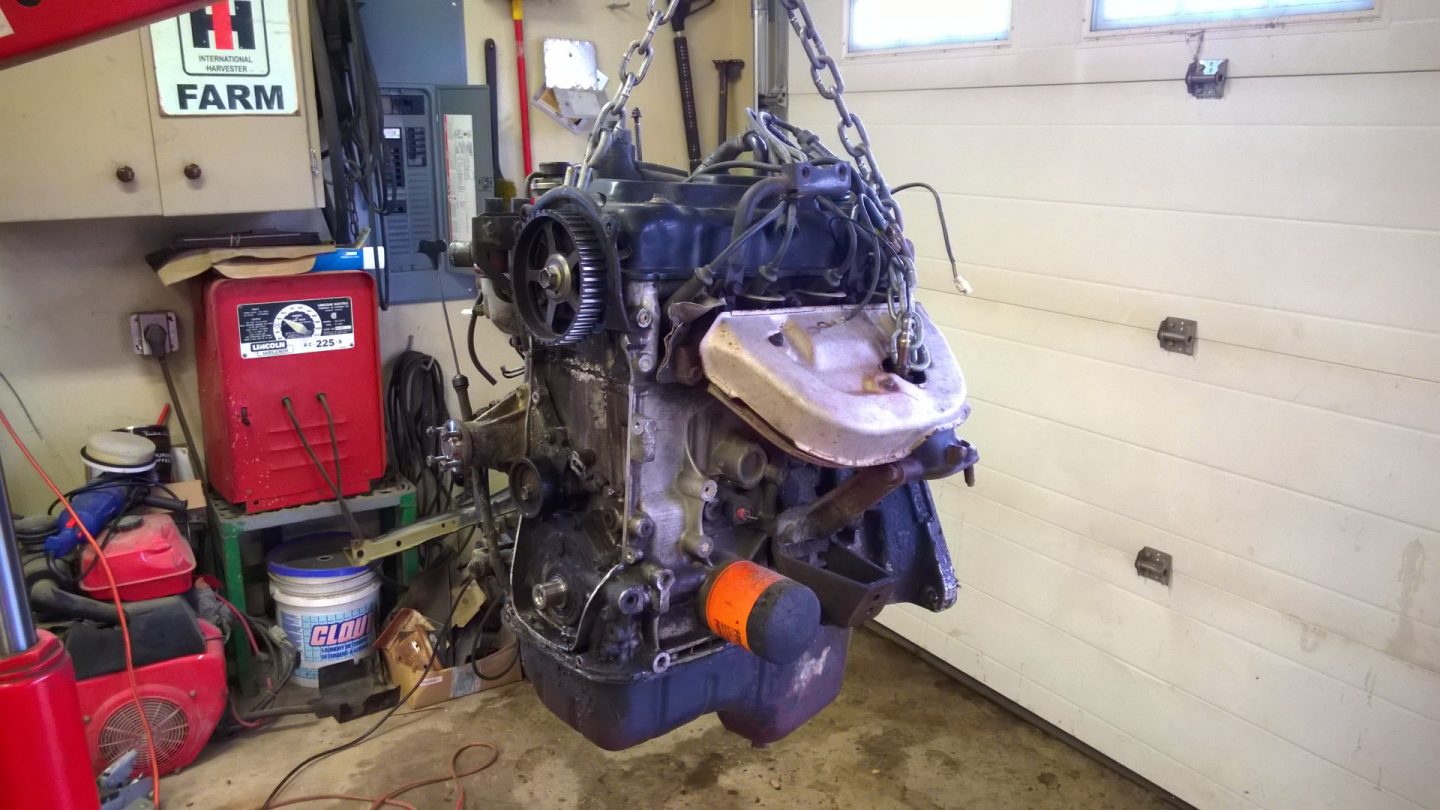 I swear by looking at how nice it looks that it was rebuilt.  I gave it a very quick bath.. and loaded it up into the truck and took it over to the Tracker..  We had a close look at the subtle differences and just swapped everything over..  everything but the core motor.   Some things were changed in the two years..  so the 89 motor got an UPGRADE..  so it’s now a 91.. set up for the auto transmission.  We should get the re- install back in the Tracker tomorrow.

Today we worked half a day, and got the motor back in.  Most stuff is hooked up too.  Lots of cursing over motor mounts and hard to get at bolts..  and wire looms. 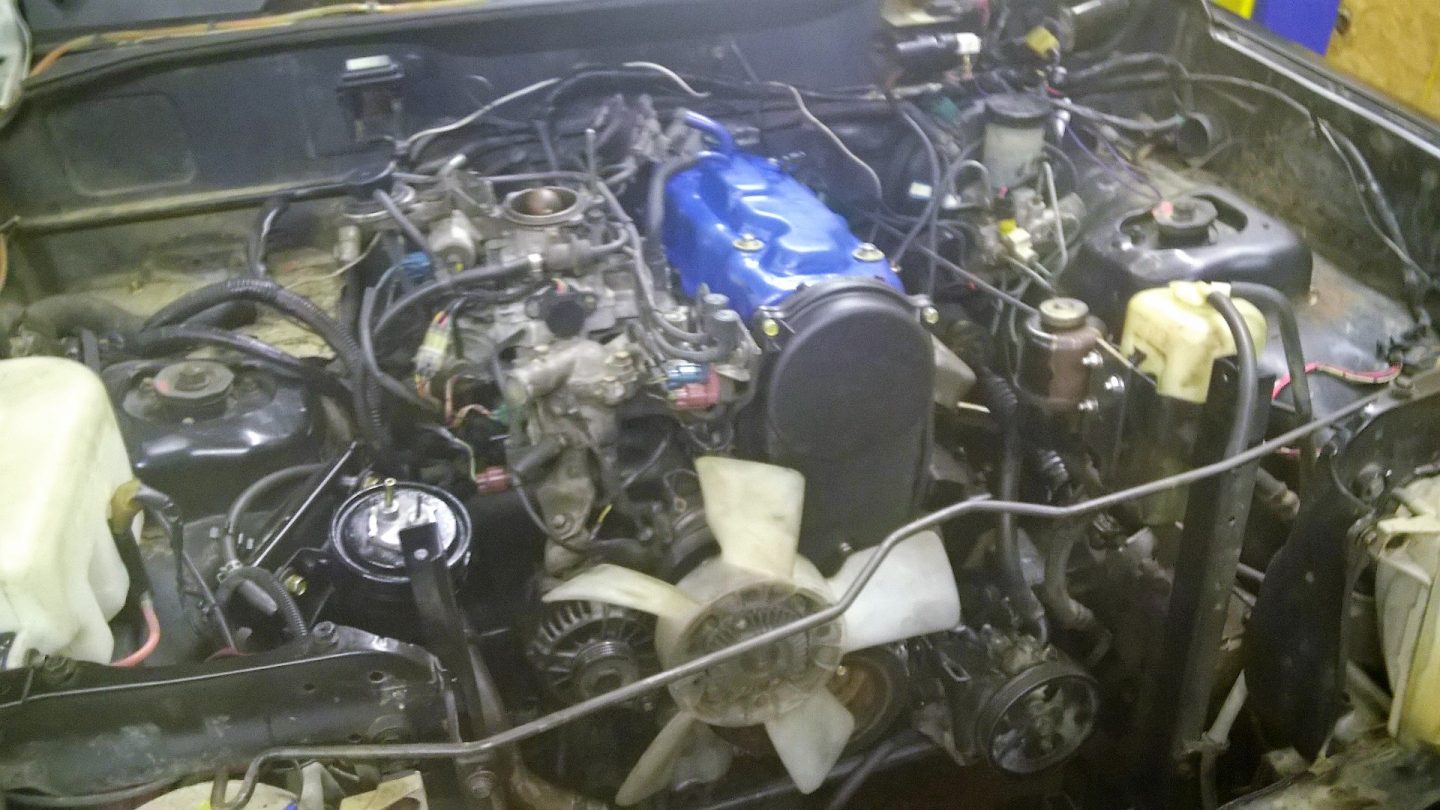 Hard to tell from the other motor because the nice bits were used like the blue valve cover.  But believe me this one has good compression. 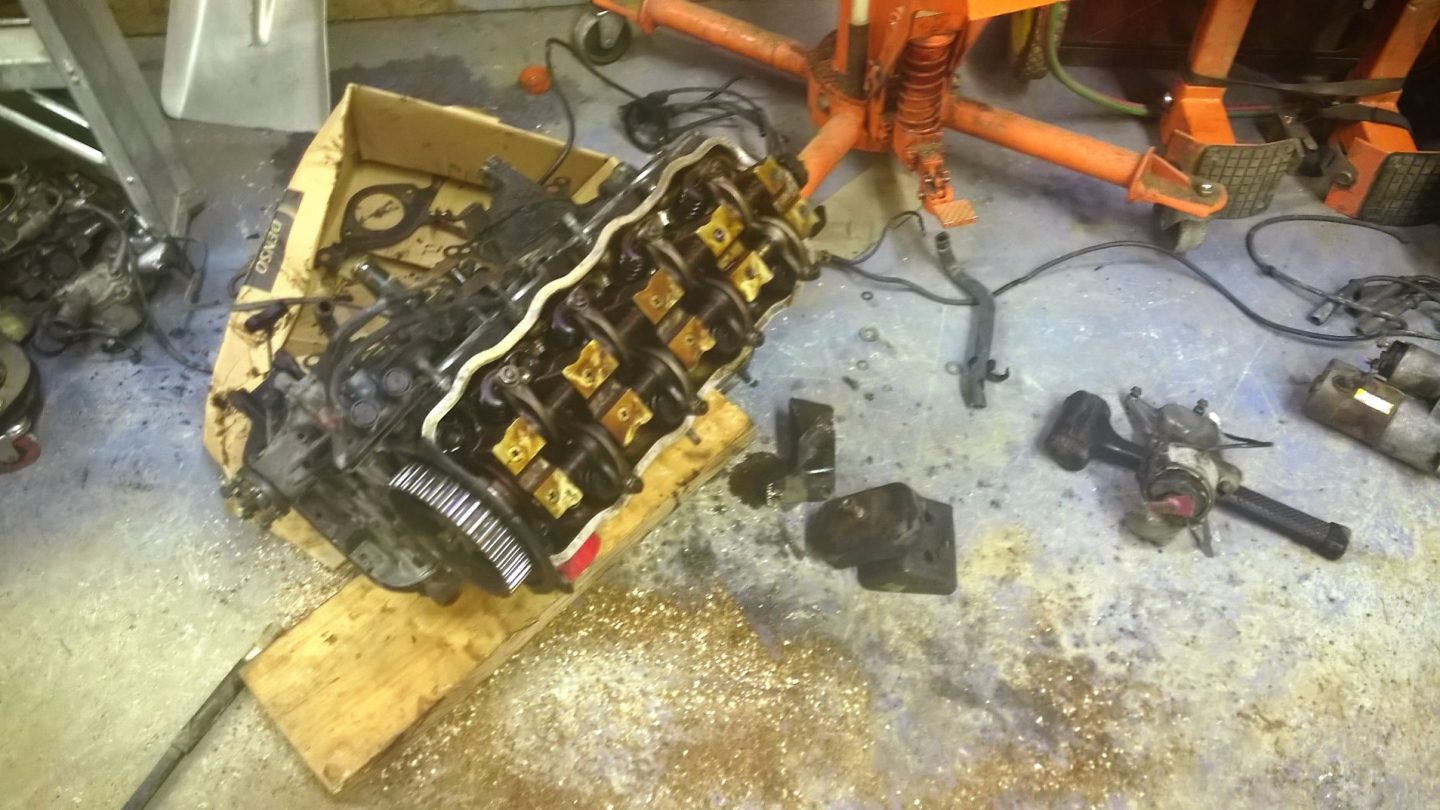 Finished all the last of the “hooking up”   and right at the end of the day,  turned the key.. no fuel to motor.  !   Can’t here the pump.. There is no way of knowing just how much is wrong.. till you test it all.   So we had to give up the space for another job Peter had.. alas we pushed the poor little guy out to the healing yard..  will have to leave it there till the bay is free again.   I’ll get the wiring diagrams and do some studying.   I do suspect the wiring for the remote start..  Parts of that have been removed.. but I’ll need to put it back to factory.   This post is getting long.. so it’s time for a second page.