Got it for a great price..  But you’ll see why. 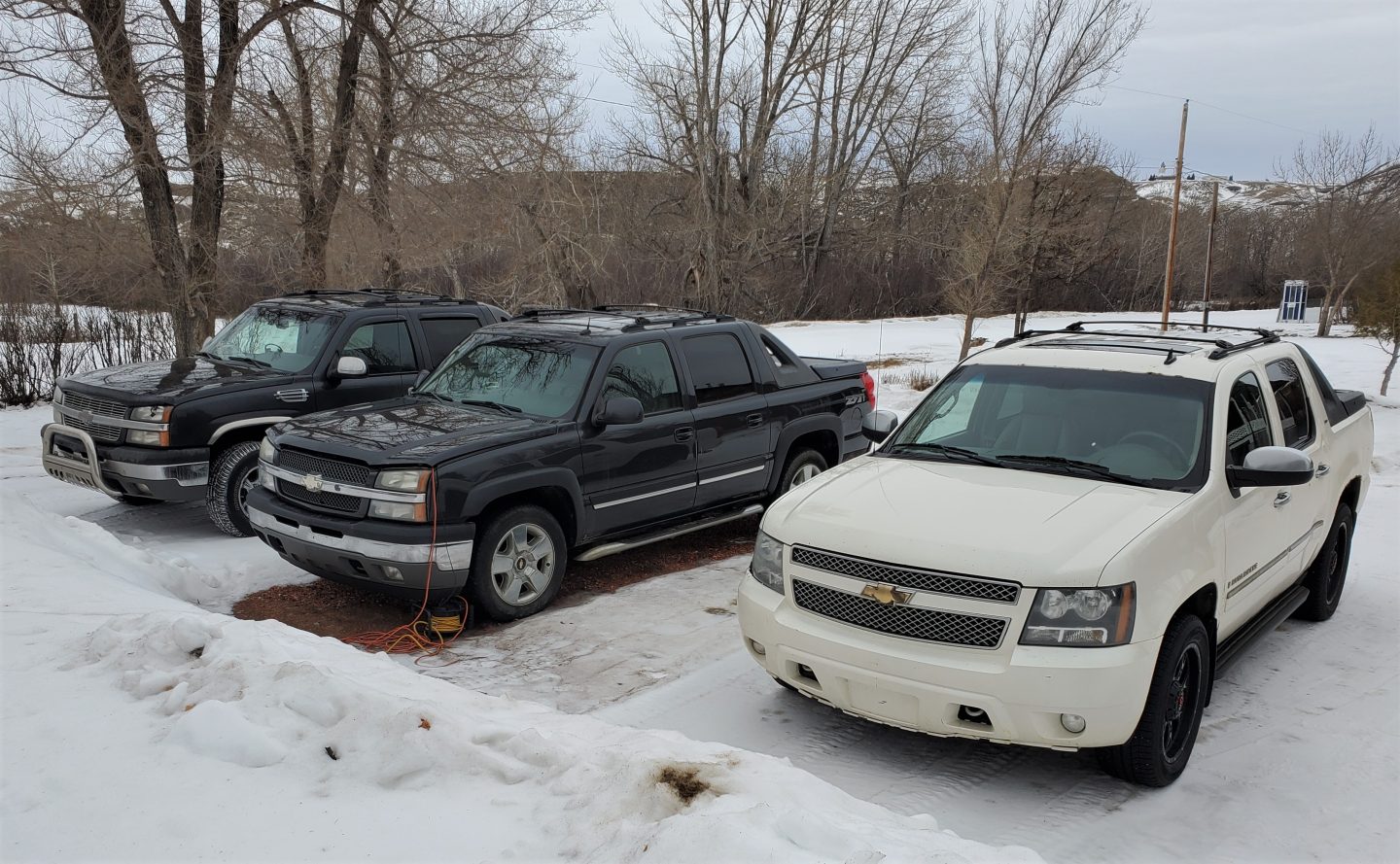 Number six for me…

It’s the one on the right..  Yes I have three.  Yes the oldest one has the least Kms.  But those two will be gone soon.  So time for an upgrade for me. A bit newer and a whole lot more fancier.  Like one grill away from being a Cadillac, but without the expensive parts ! Now for some Avalanche history..  The last year Chev made Avalanche’s was 2013.  This one is a 2009, and there is only a few changes in those last years.  New this one would have sold for big bucks… on the plus side of 50 thousand.  The LTZ model is top of the line, and the only two things missing from this one is Nav and the rear camera.  So it’s definitely what you call “loaded”.  ( I’m adding those) 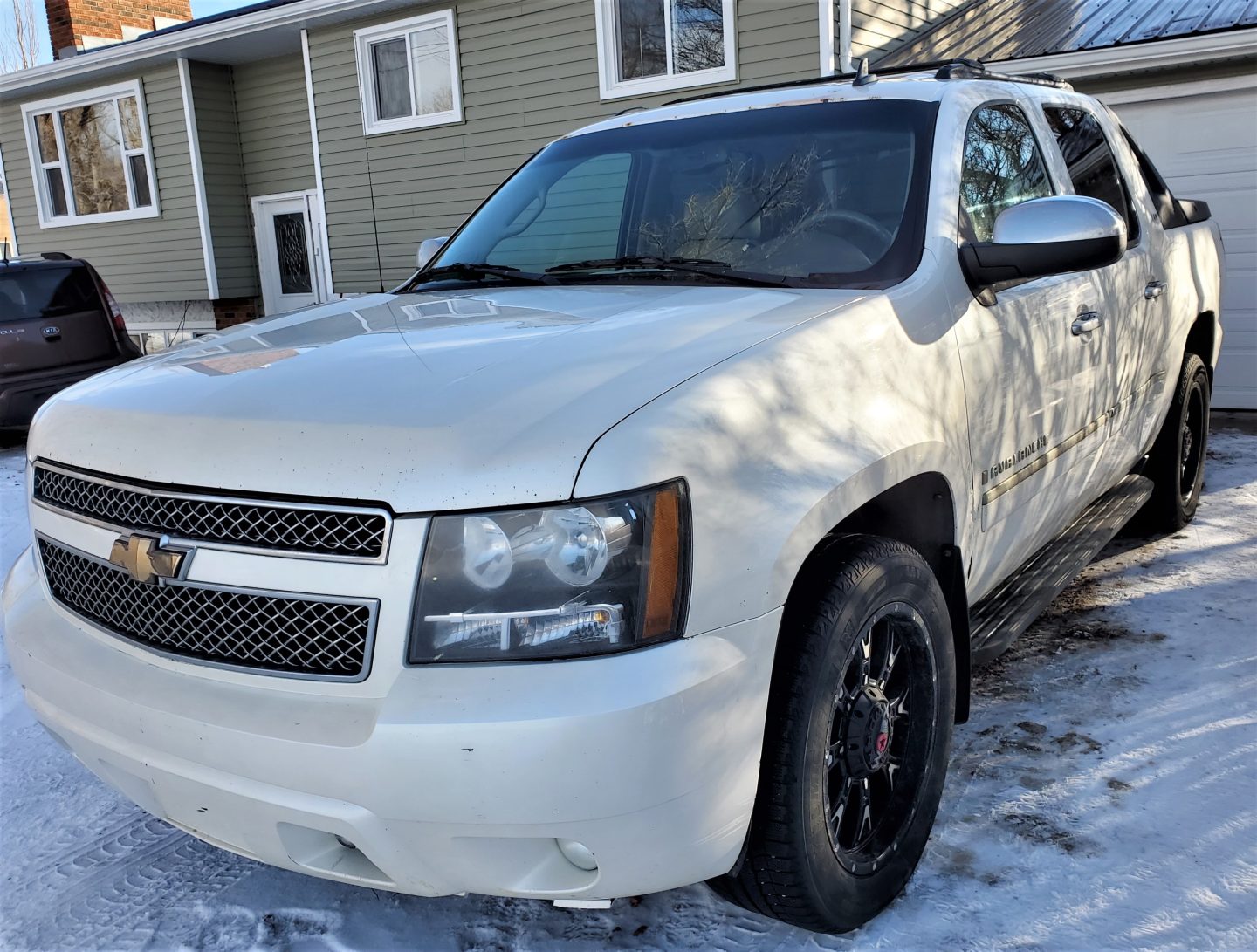 Hard to tell but this is the pearl white paint.  Which is classier than just white.   From the factory it would have 20 inch chrome wheels , But these are new after market 20 ” “Worx” rims and new Michelin winter tires.  That’s a bonus for me, and so was the new windshield. 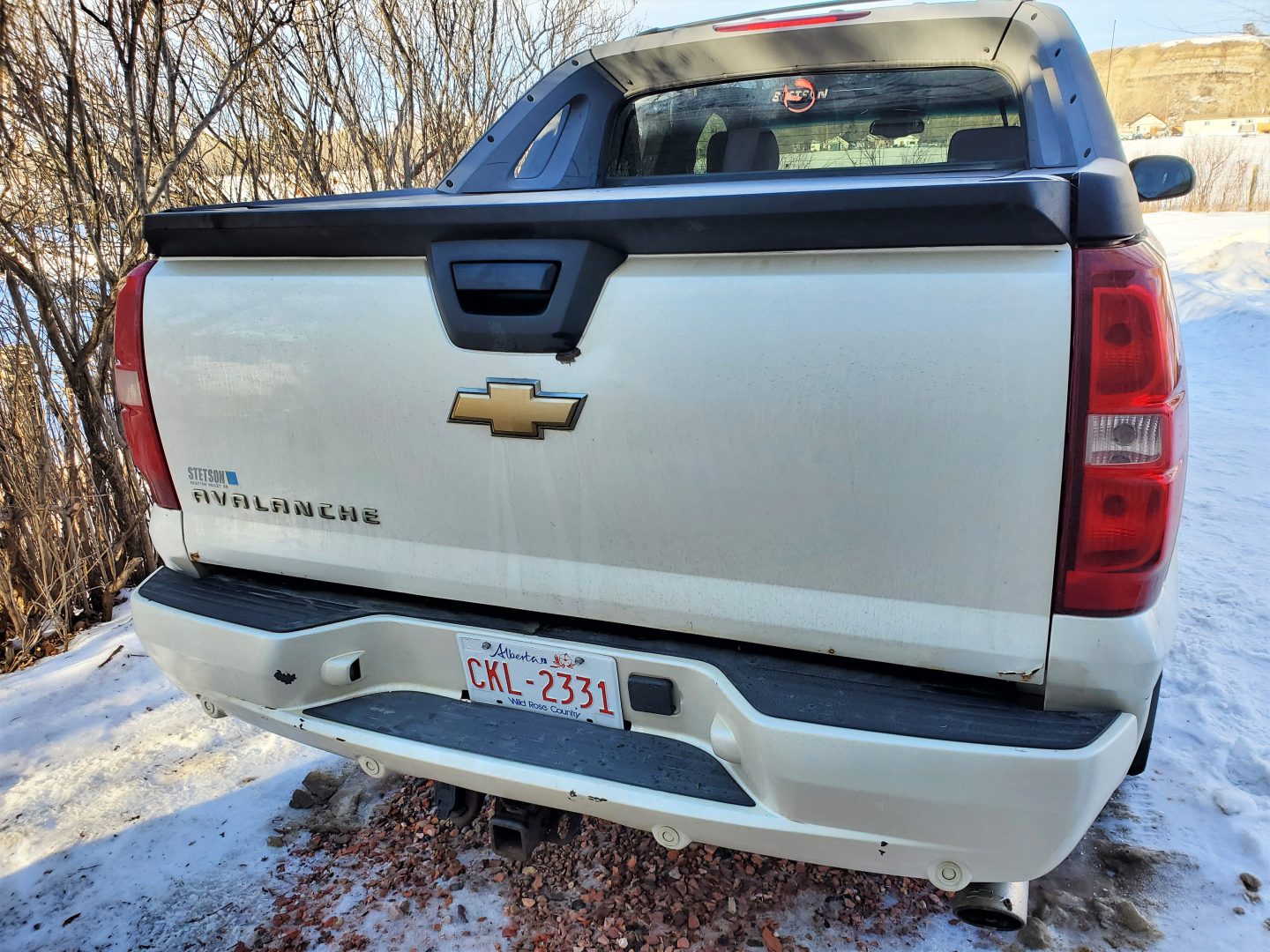 It’s nice to see a bumper that is not bent, ya some paint chip and scratches but not bent.. The parking sensors work !  and the trailer plug too. The rest… well nobody ever cleaned the interior.  And something very heavy was put on the dash and cracked it.  But no other damage inside.  Lets have a look , and consider these the “before ” pictures. 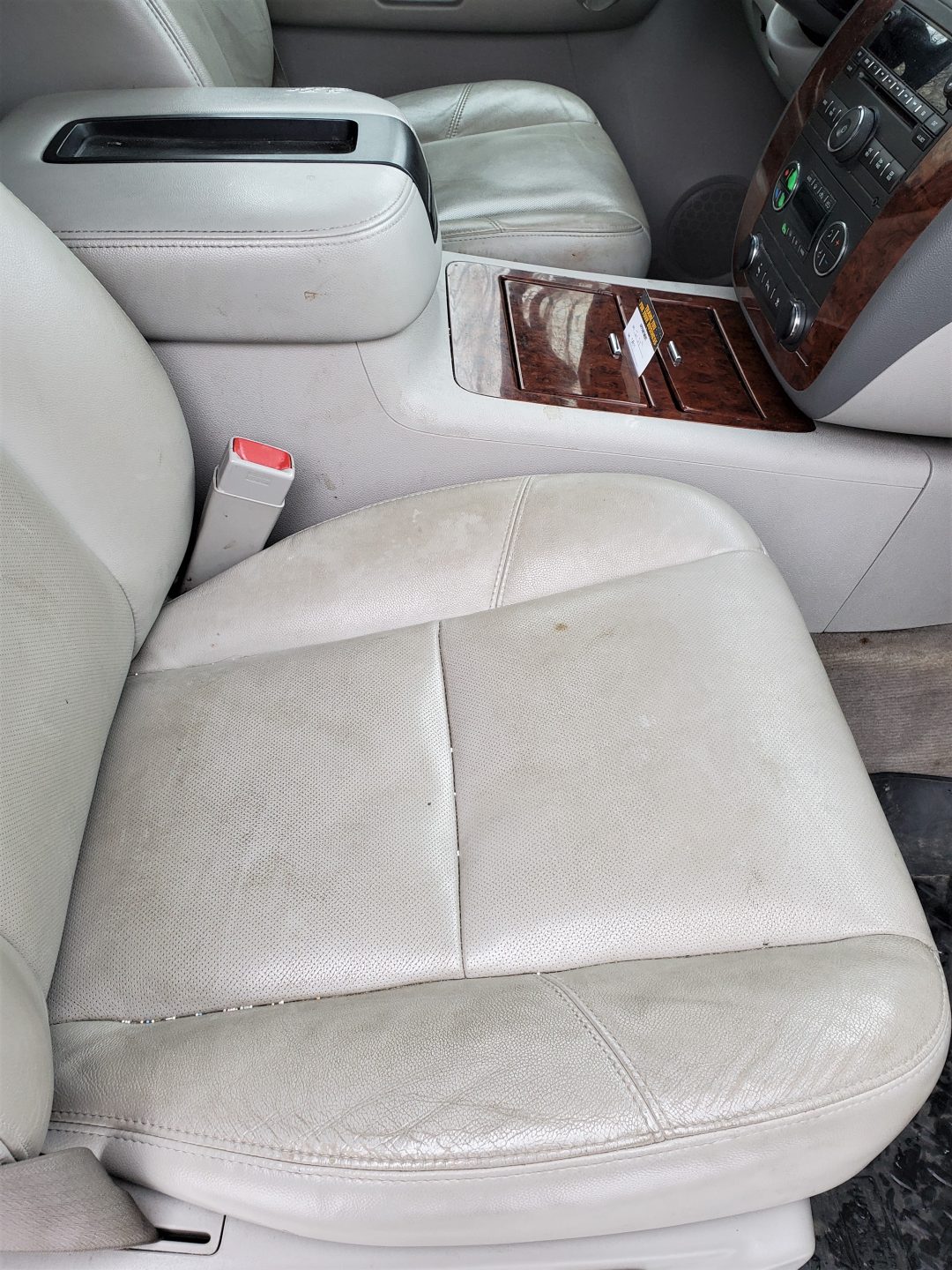 Light grey leather seats.  Dirty but still in good condition.  These are heated and cooled ! The driver’s seat is the one that takes a lickin… And there is some cracks on the side, but not on the seat.  They are comfy too. 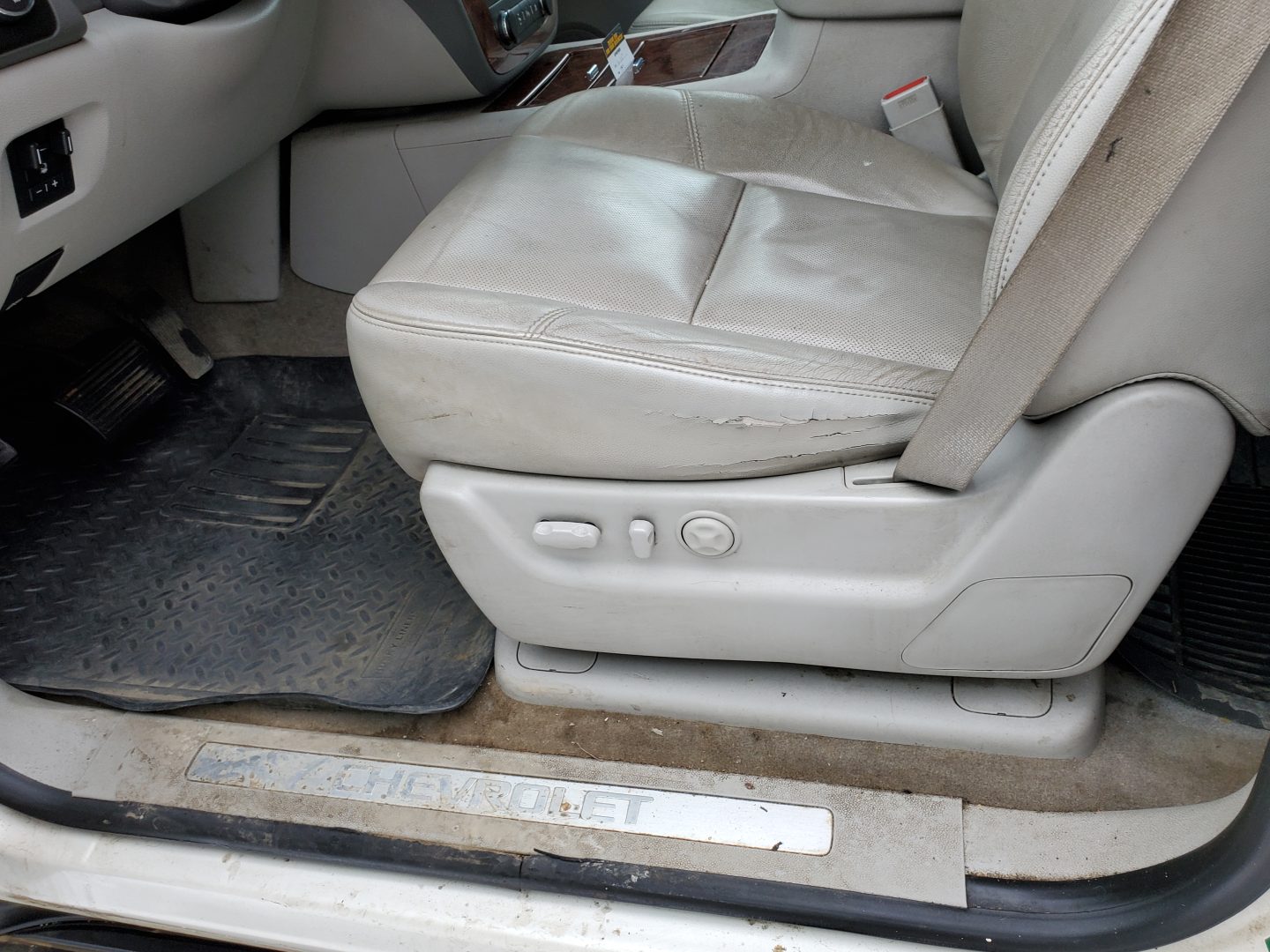 You can see the cracks… but they are not bad.  These seats are 8 way power..both sides. 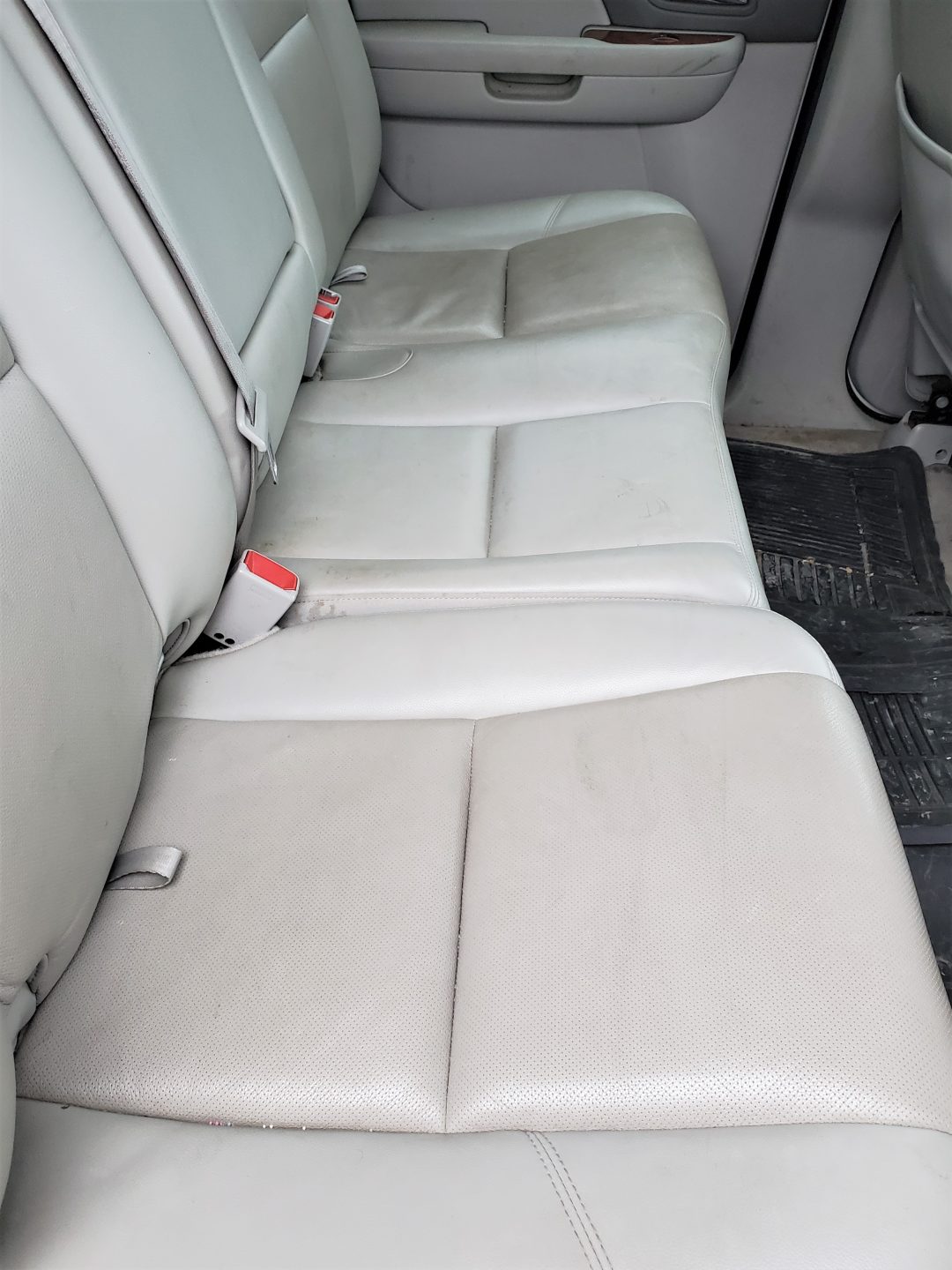 The rear seats have probably seen some kid activity, but survived nicely.  I tumbled the seats and opened the mid-gate, it’s all good.  The Avalanche has a date with the auto detail shop this week.. Should see a big difference.  I’m going to interrupt here and say that this Avalanche drives very nice.  Brakes are great …lots of power and good on gas too.  It was a two hour drive back from Calgary yesterday and cruising at 106 kph I got 10.6 liters / 100 km.  Not too bad! Plus it goes down the road straight.  It’s a pleasure to drive.  AND it has 285,000 km on the old odo.  Alberta is like that..  everything has high kms. 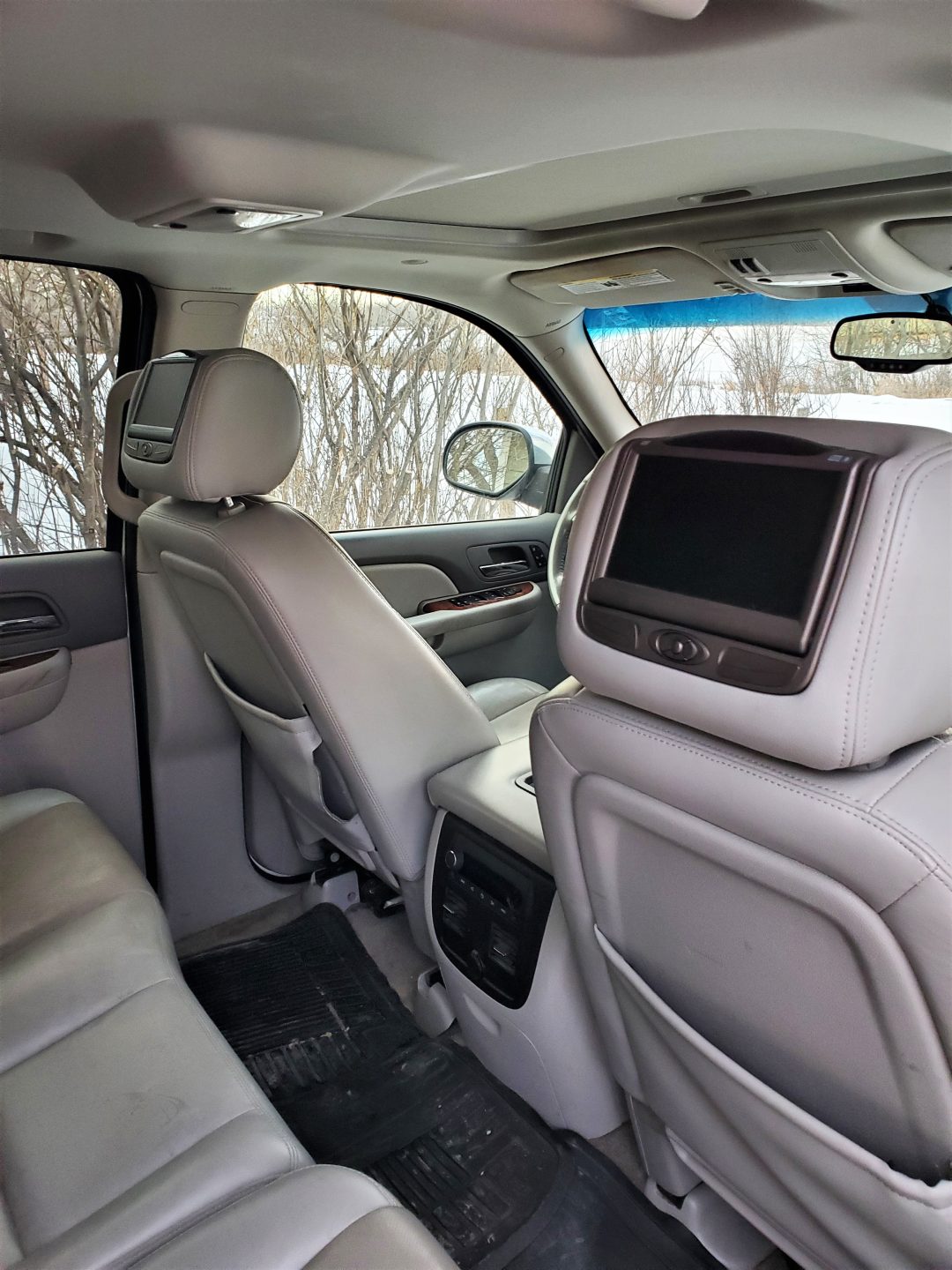 Yes two DVD players !  Crazy eh..   They will most likely never get used.

So lets talk about the elephant in the room…the reason I paid six grand for a Ten thousand dollar truck..  THE BODY ! yes That’s where the work will be. Oh and I want to say don’t waste your money on one of those electronic rust inhibitor’s. There’s one installed on this Avalanche from new I presume …I found it. 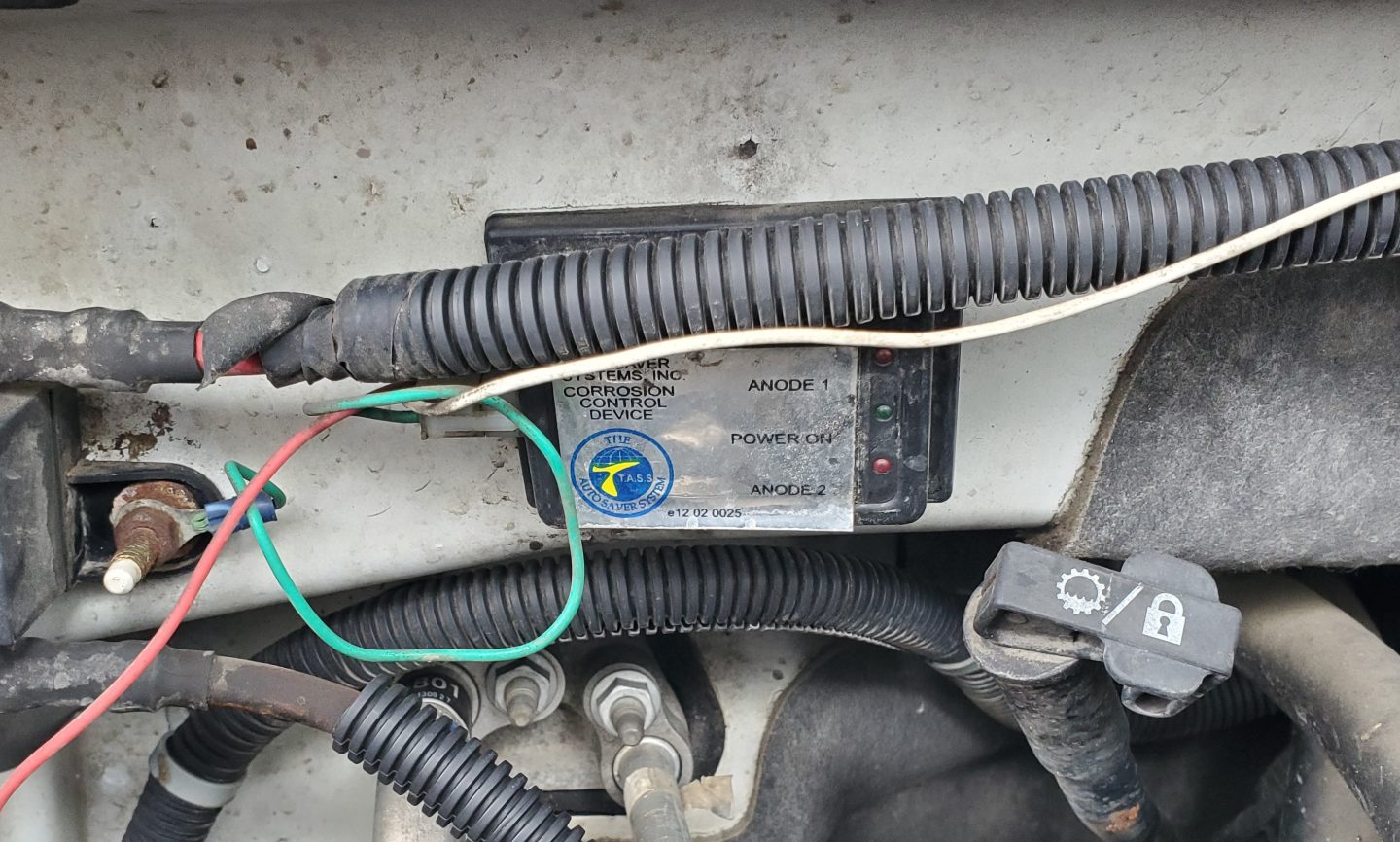 They don’t work and this truck proves it..  RUSTY  you bet.  Ya it’s Alberta and they use lots of salt on the roads…but if you wash it ..keep wax on it should last longer than 13 years. 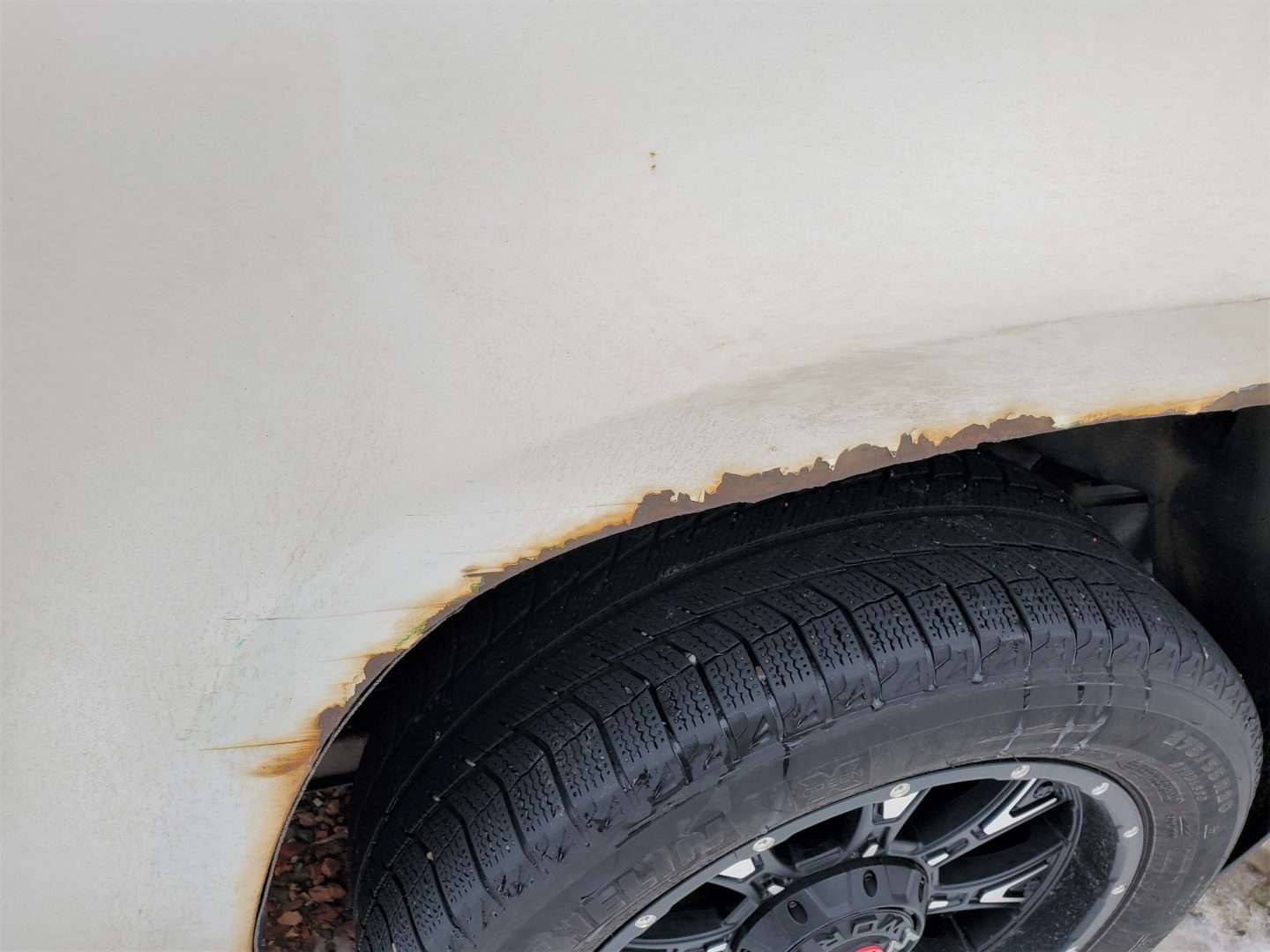 This is the drivers side rear fender.  The other side is bad, and bottom of the doors and other places.  So that’s a bit of work..  Then there’s other body stuff… 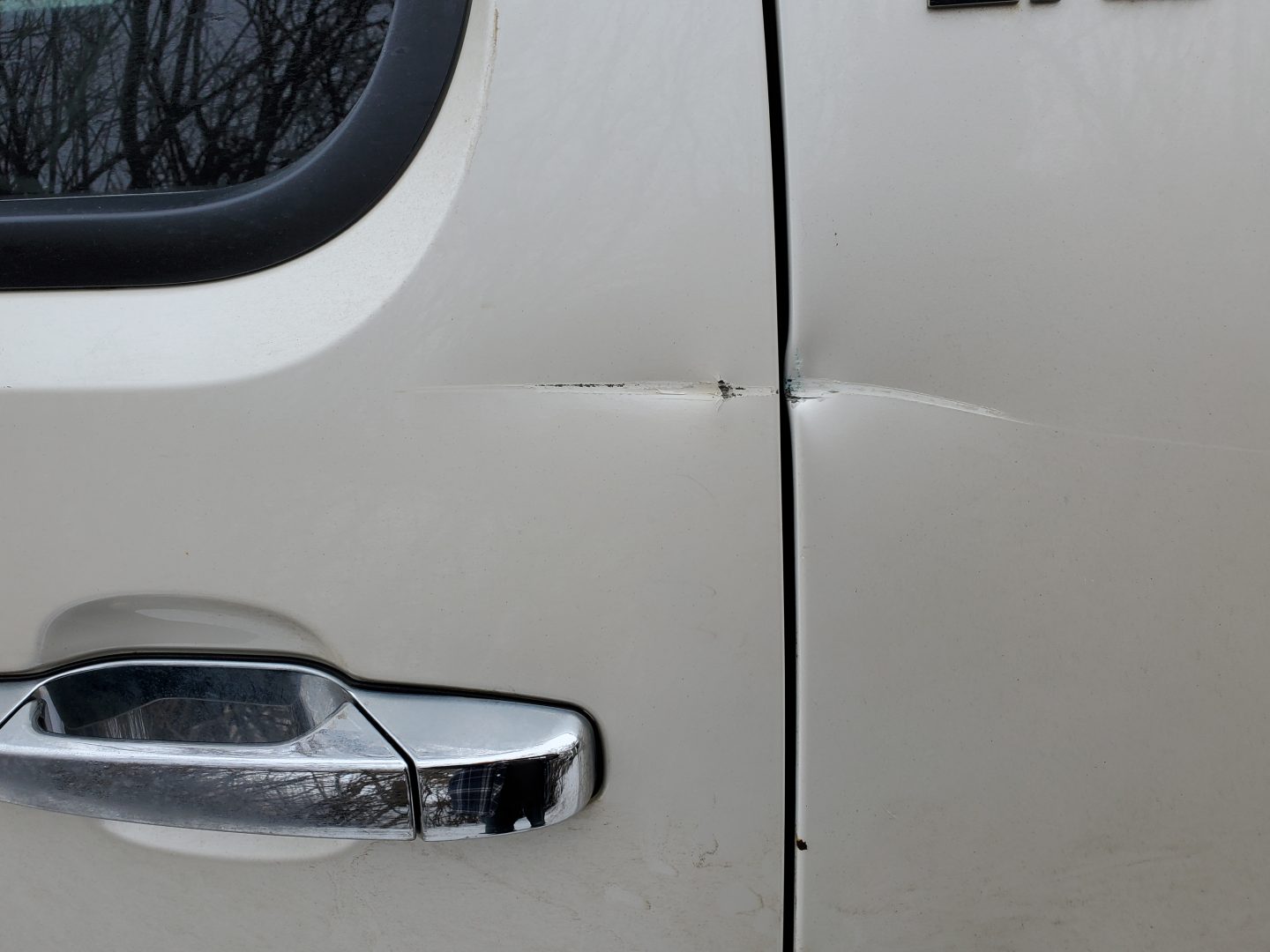 Like dents and scratches…  Lots.  So I’ll have to figure out what to do. The Avalanche is worth making nice.  As far as the mechanical end of things all I’m aware of are the air ride system not working.  And the two functions on the shift leaver are not working..They are: tow/haul mode and the manual shift button. Could be a bad wire.  As for the air ride…  After 13 years and 285,000 kms one should not expect that to work.. They were prone to failure.  The fix is to change over to regular shocks and remove the compressor and install the delete kit on the wiring so the warning goes away.  I’ll be surprised if there is other problem. Here’s a video.