Yes I can do this once more !

Because I have history with ATV’s.  I’m justifying yet another one.. And won’t even include the rare and one’s that float..  Had a few of those.  No let’s just mention the ATV’s that we all understand.  Start with the first one that I just wanted as a project.  Oh and I need to say that I’m a late bloomer in this off road world.  In fact it was in the summer of 2013…  not that long ago… that I first rode a quad.  POST HERE  The very one that my sister sold to Dave and he still has it .  AND THEN !… I found this..

Links to the posts are green. 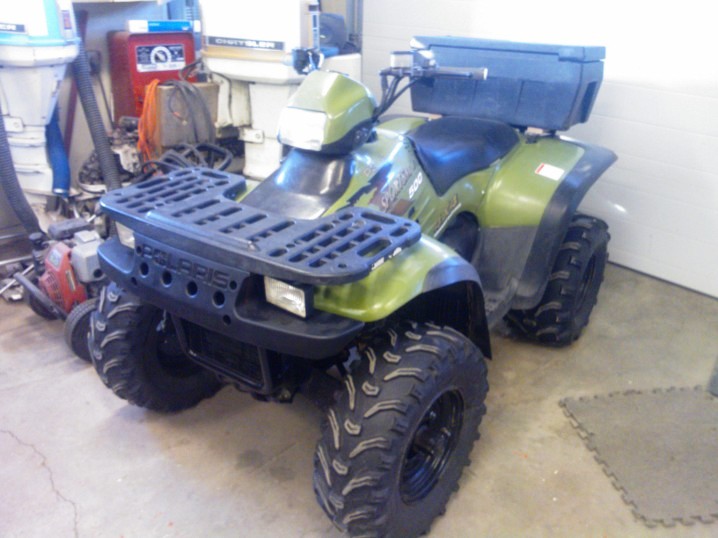 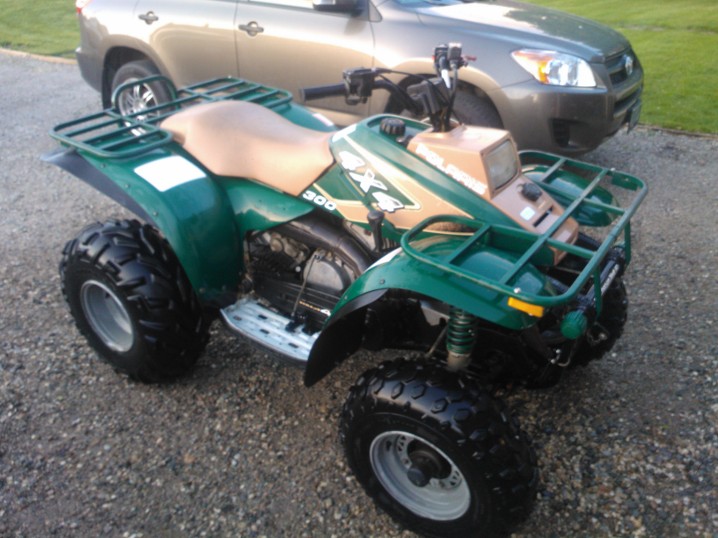 A cute little guy.  In very good condition.. Just needed a few things. Prompted me to join the ATV club and started riding lots..  However this one was a 2 cycle motor.. noisy and I had to pack lots of mixed gas if the ride was long.   Which then prompted me to just go buy a new quad ! WHY NOT.. 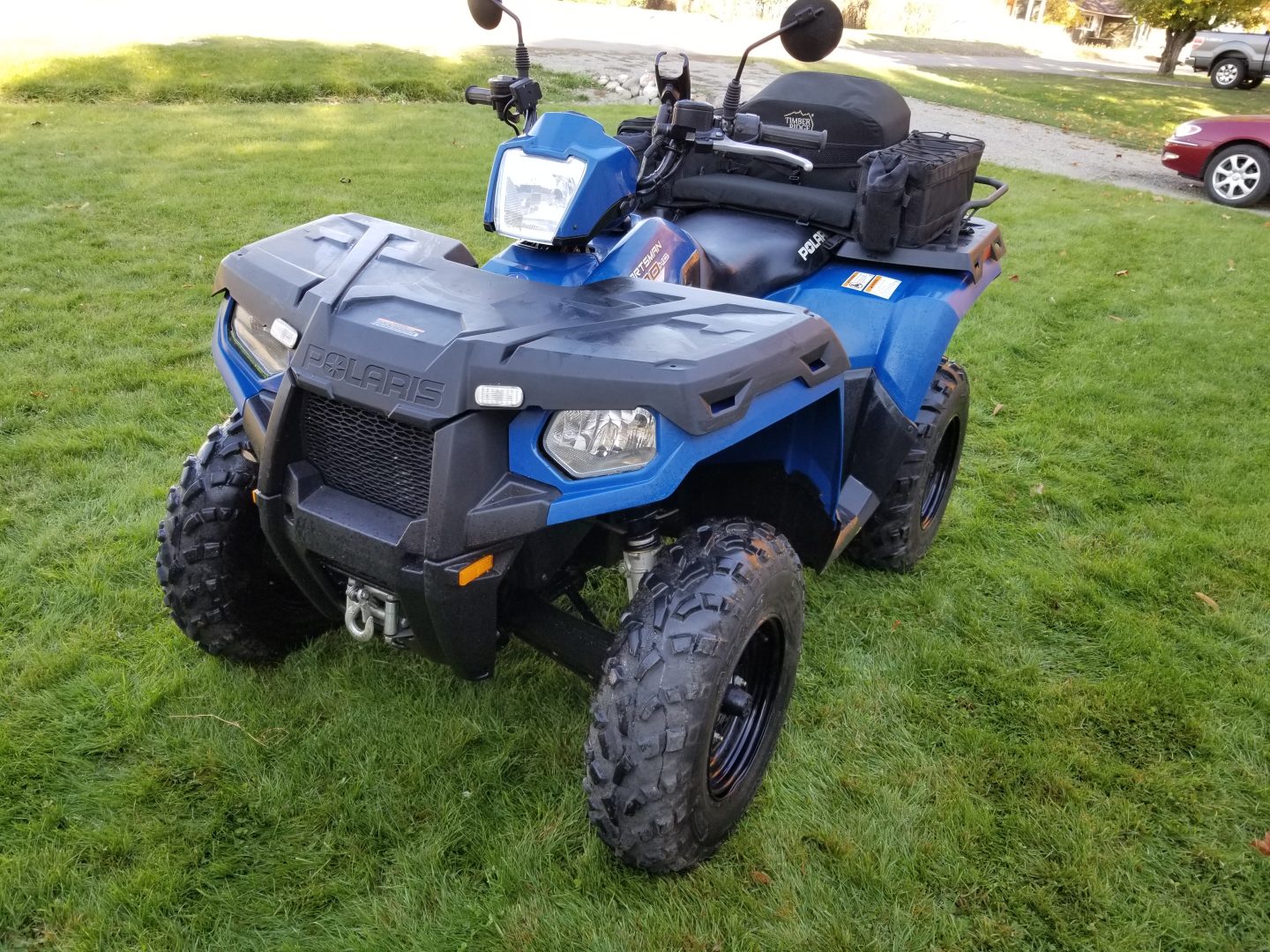 I had my choice of color and I fell in love with the blue fire.  I decked this one out and put lots of kms on it.. went amazing places.  Never let me down.  Kept it for five years.  During that time it was a fleeting thought that maybe Mo should have a quad to .. and join me.  So we found this one and also bought a fixer for $100 . 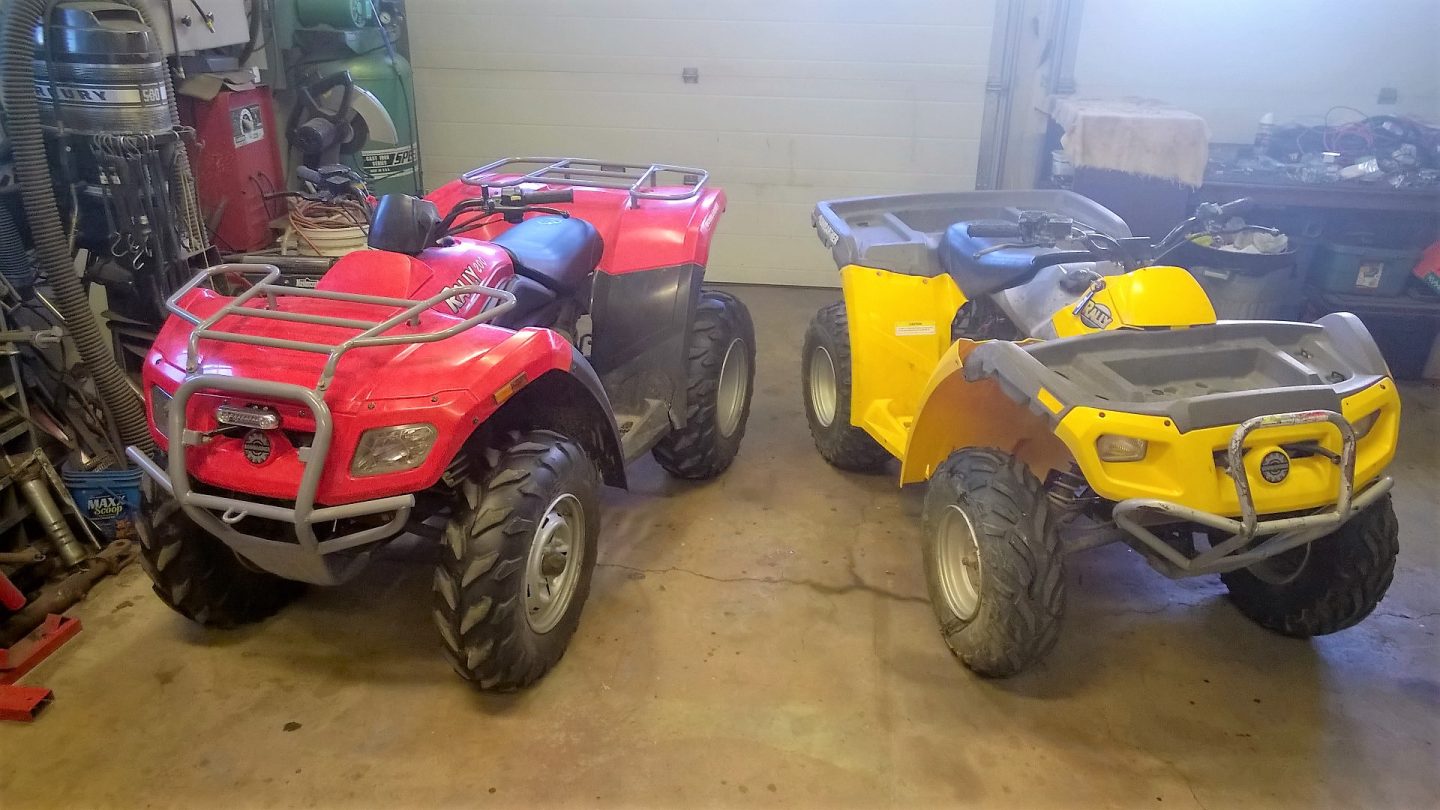 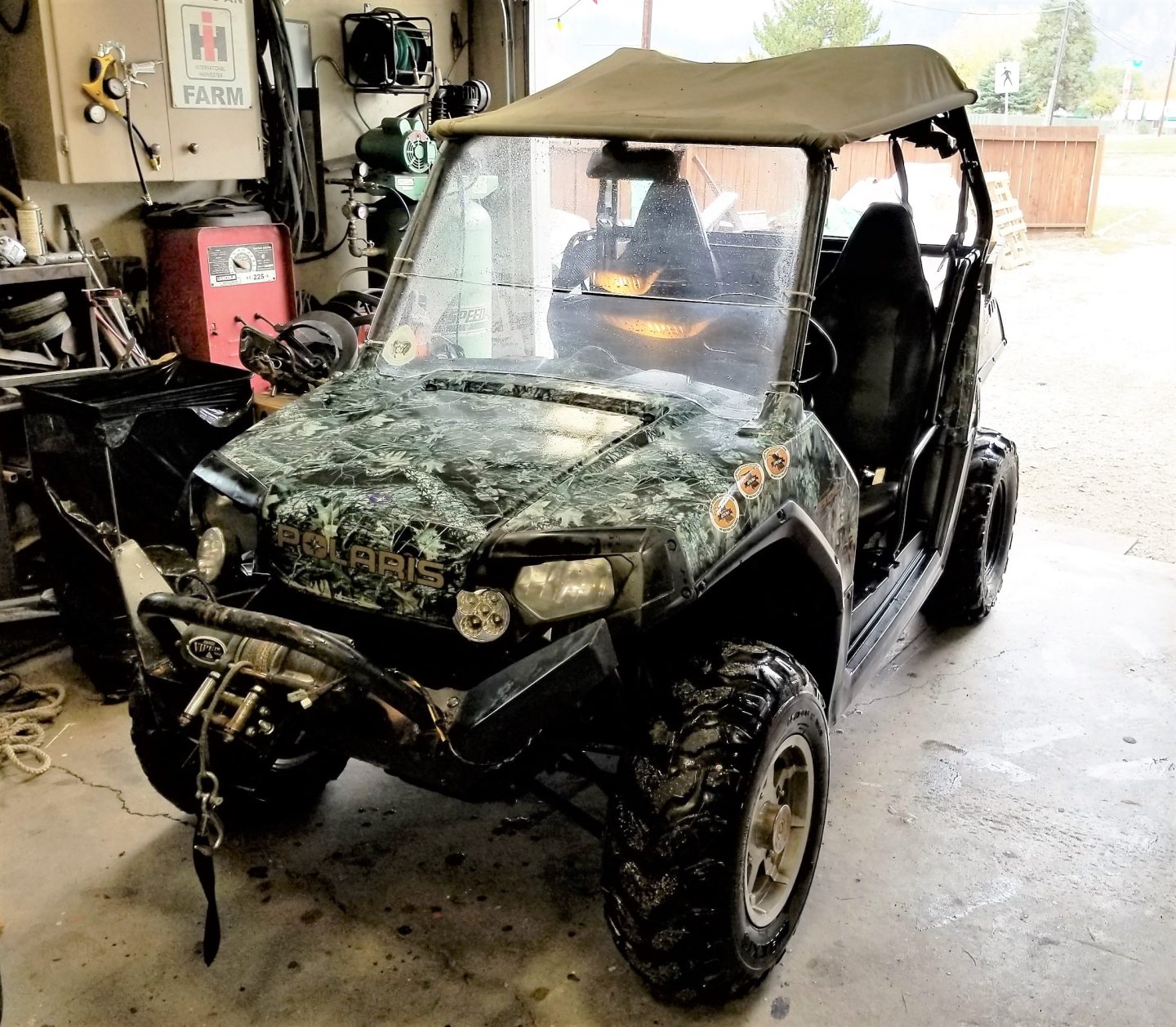 This is his 2010  RZR 800.  He asked me to fix the bush guard .. you can see in the picture that it’s bent down from lifting the snow plow.  He let me take it for a ride for a day.  I really liked the comfort and the fact that if it rained you were dry..  So I went looking for a RZR… 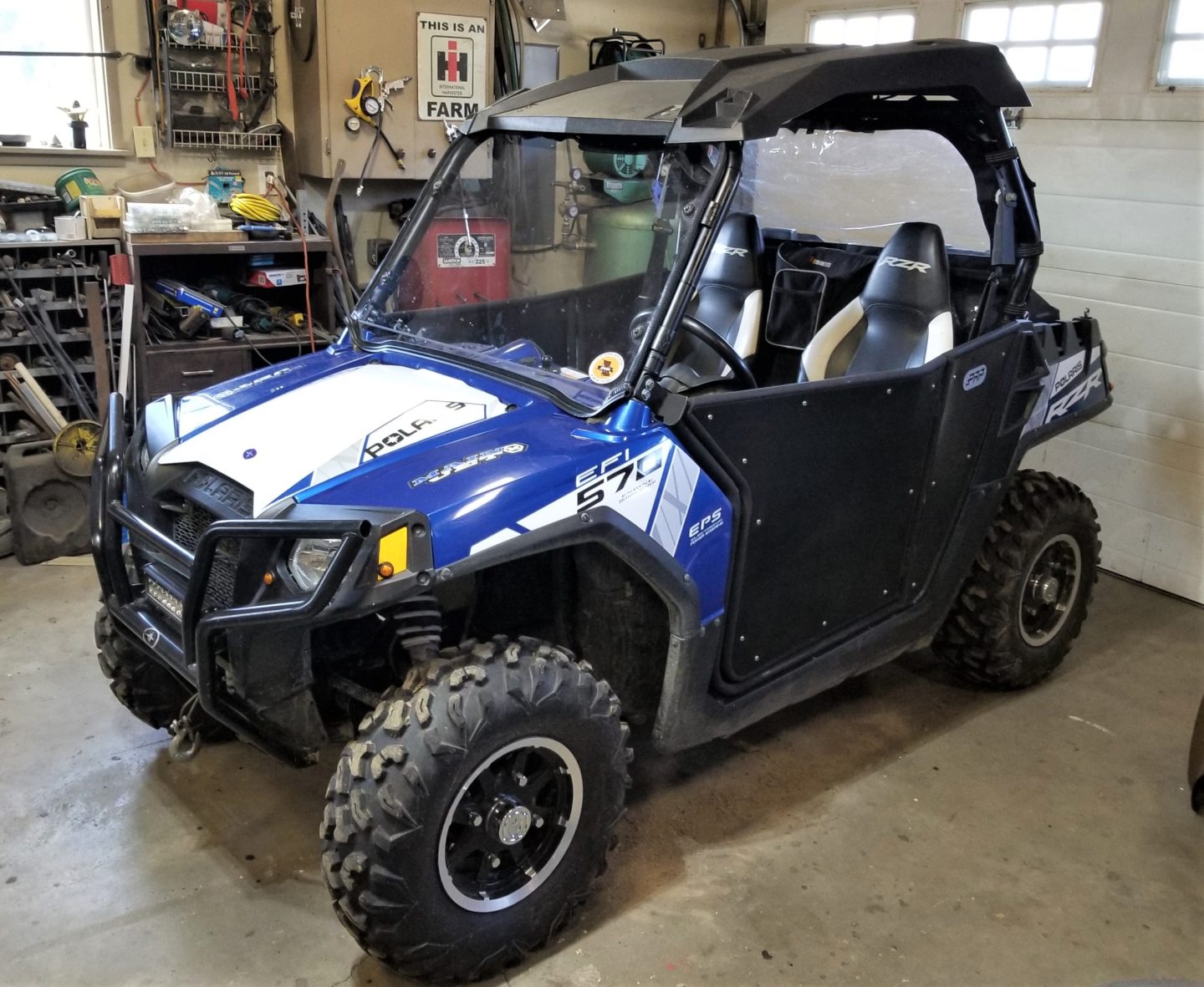 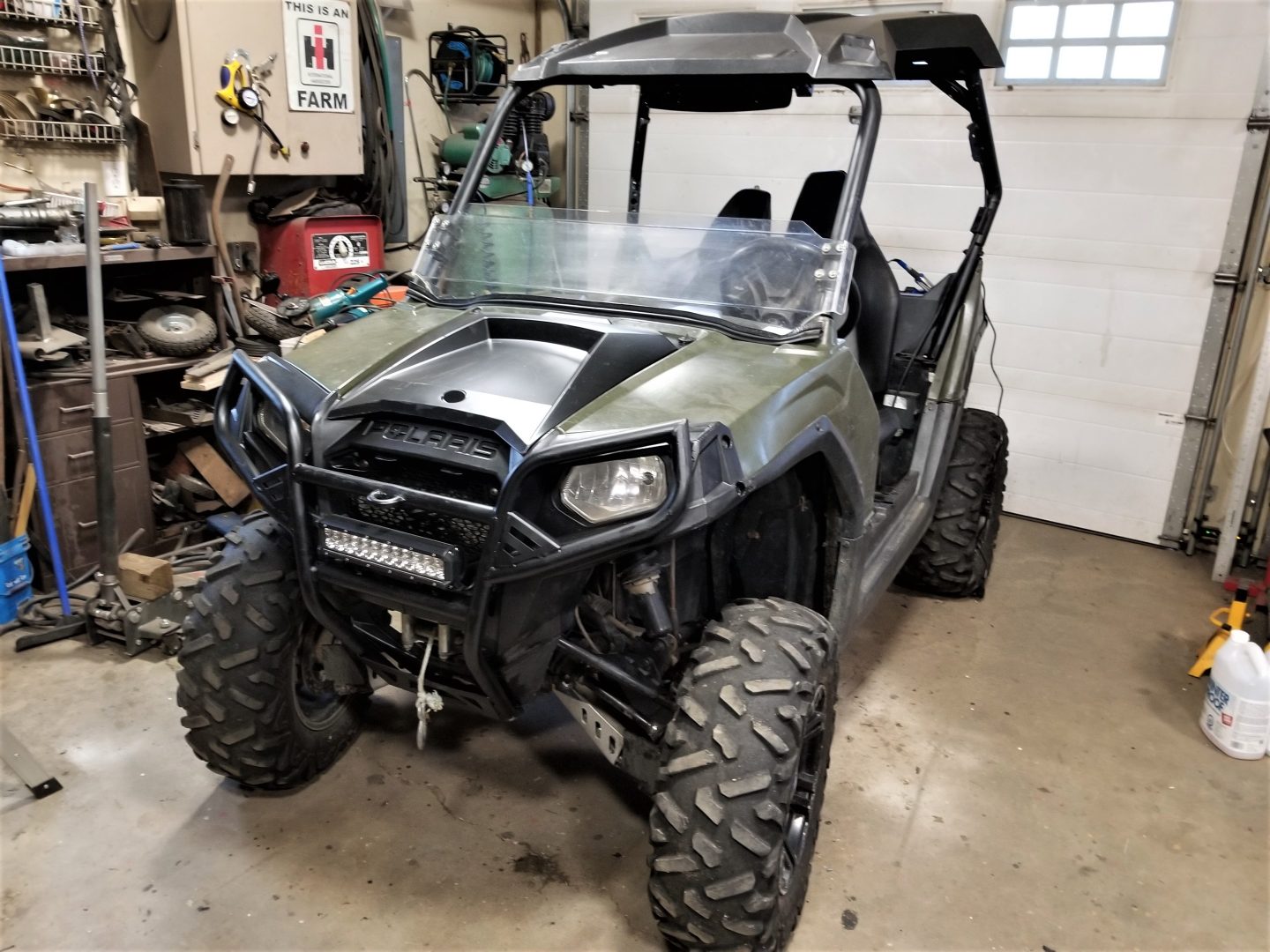 This was cheap fixer I got ..  needed some work. I took the doors for mine and fixed the issues. Sold it for a profit too !   THEN we moved to Alberta !  The 570 RZR came with me! However there didn’t seem to be a place to ride..  So I sadly sold it and the trailer I had to haul it..  Got more than my money back.. so not all bad..  And now this 2005 Sportsman 500 has come along..  I would like to keep it. After all it’s blue !   Waiting for parts  still and just putzing around till then.

So now that I qualified myself… Here’s the latest..

The needed part.. ( SSCM surepower  regulator / control module ) will be a long time coming. Or maybe not at all.. So I cancelled and exploring other ways to power up the quad. It’s nice weather to work out in the garage now..  So I put the whole quad back together and kicked it outside under one of the shelters. 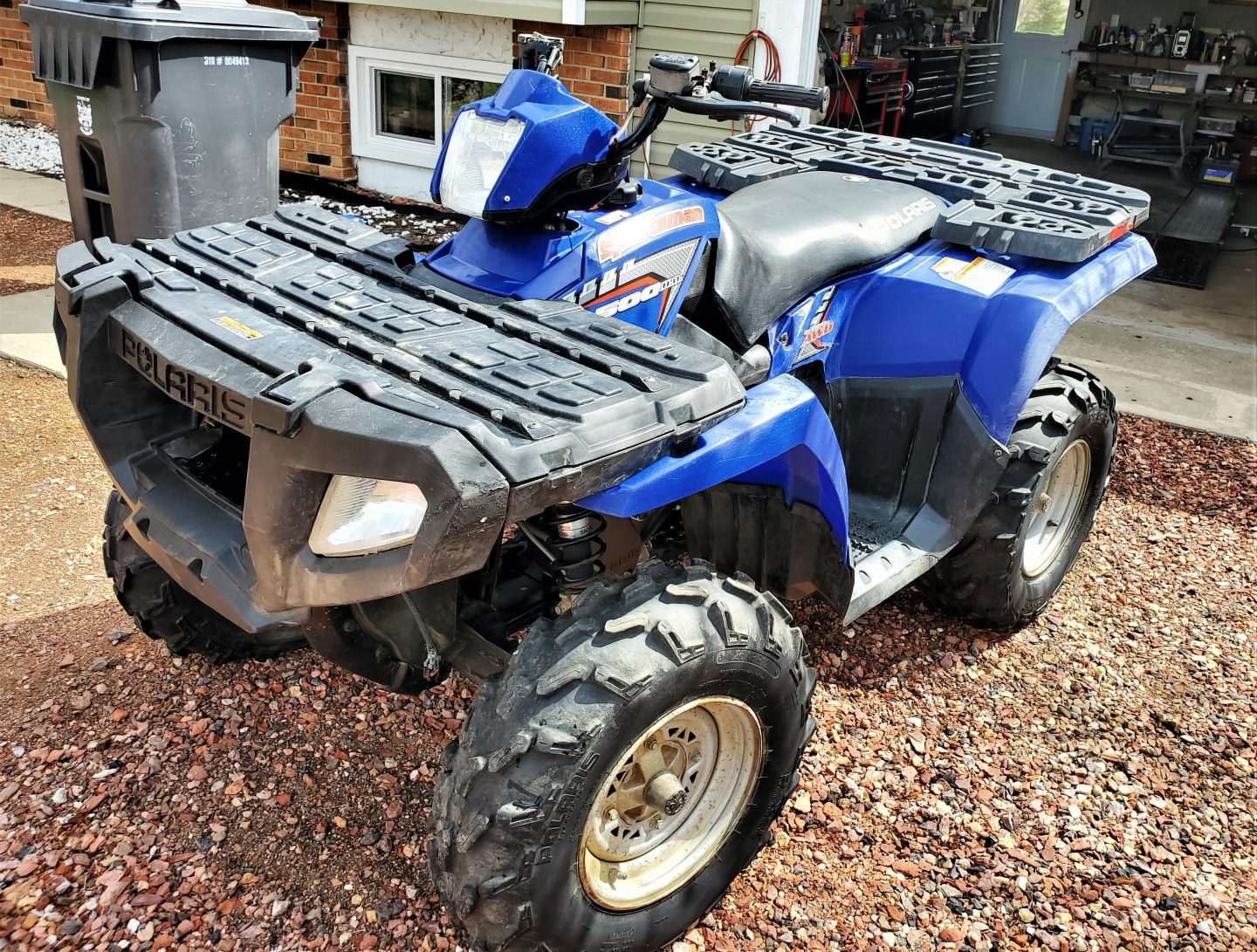 Here we are all back together..  and heading for storage till I figure things out..

And this was ( what I think) is the answer…

Someone on YouTube had this same problem..  and his solution was to go back one year ..2004 when there was no Solid state Control module..  just simple stuff like voltage regulators …  and use that wiring harness.  Forget the BS.  It’s possible !  But at what cost as far as losing some of the features.   I’m going to find out !  today I brought home a running 2004  400HO Sportsman..  AND a parts machine with the wiring harness still there.. 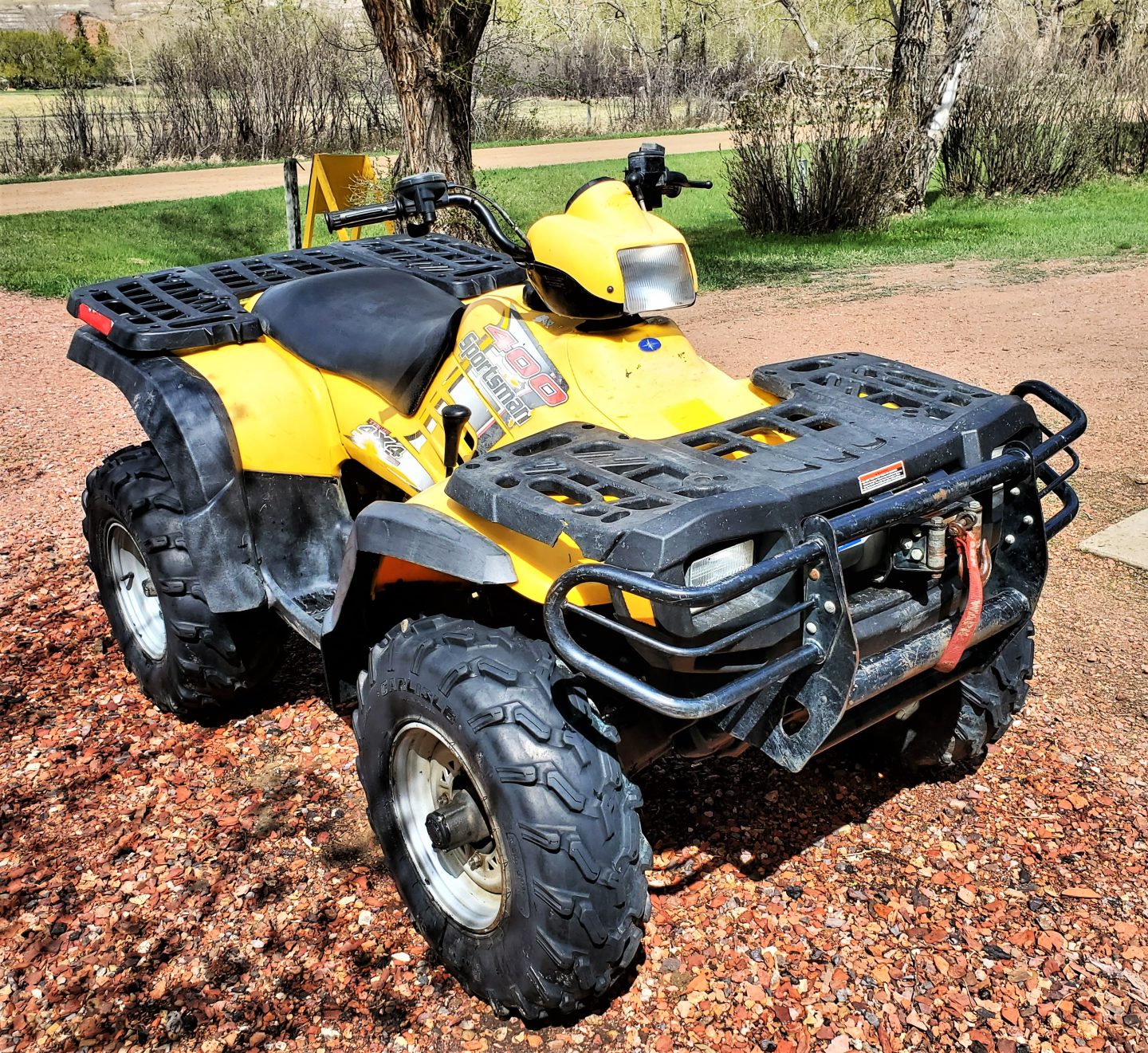 She’s a beaut !  Hey unlike the 2005 this one drives and everything works.  A little rough but nothing serous.  And that’s thanks to this very sad looking ( what’s left) quad. 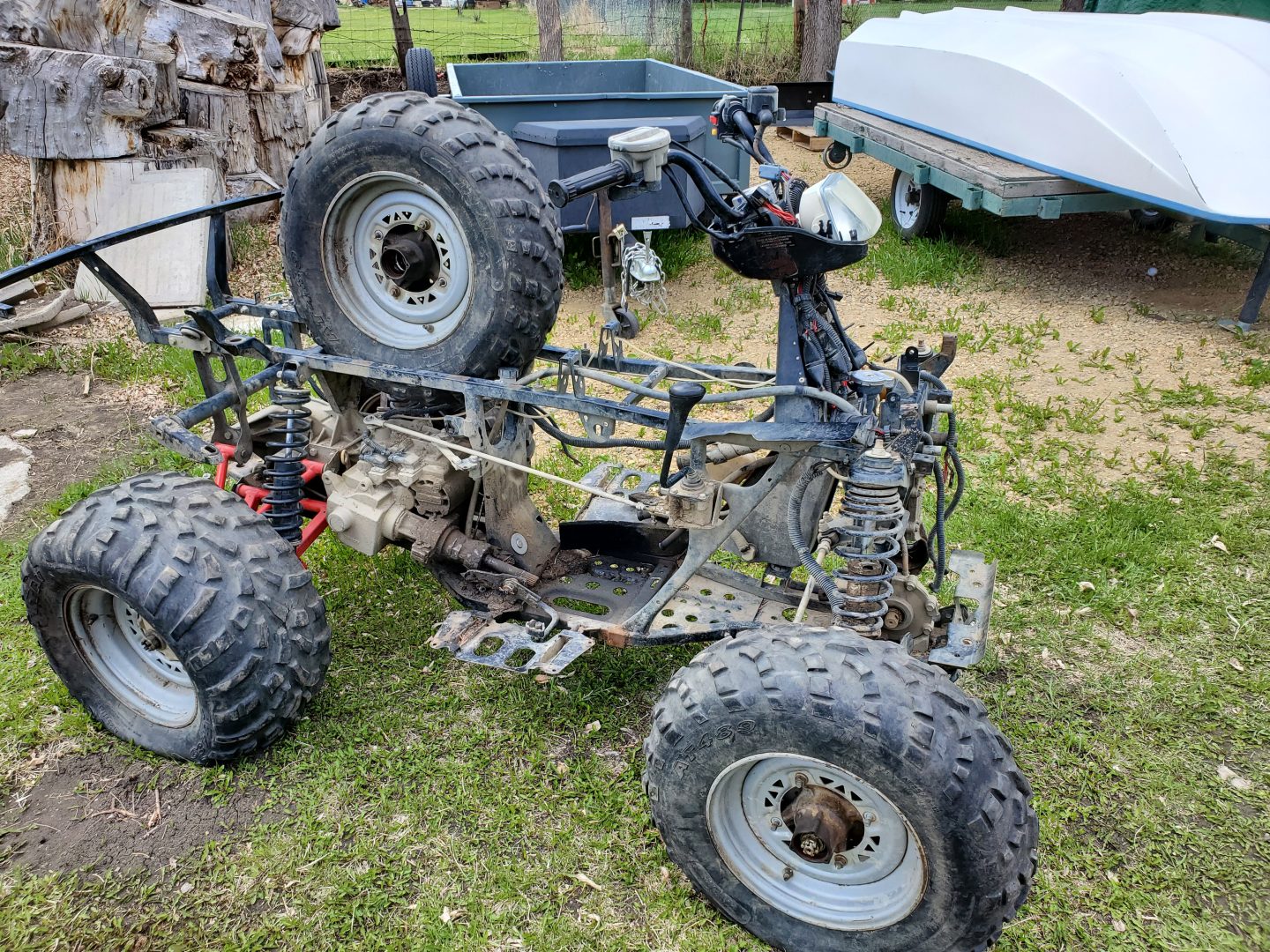 And the winner of the three legged race is….   Ya.. The parts you don’t see like the motor are in the barn. None of the plastics or the seat survived.  This was the donor of parts that made the yellow one good.  The frame is cracked so it’s just for parts..  And all I’m after is the wiring.  I’m eyeing up the handle bar stuff too..  There’s other things now that I need to do ..So this project will have to wait for now.  Oh and we are moving into town..

We are all settled in the new house ..  And I have the garage mostly set up .. well at least I can find my tools. I know I have said I can fix the quads… BUT I have decided to ditch the two quads and get one that does not need work.  They and the parts are now gone.  I also sold the Kubota.  So now the garage has lots of room..  Here is a new post for the new Polaris.