Don’t even try to keep up with me !

You will hurt yourself..

Everyone was getting a quad..  I had a Sportsman 500 this winter… as a fixer upper project…  but I found it to be complicated and just a tad too big to fit my Avalanche.  They are great quads.. but I sure liked the profit that the sale brought me.. and it was time to move on to the Bazoo . Now with that done..  it’s again time to move on.. But I want to have some fun this summer..  Then this little guy kinda fell into my lap while advertizing a trade with the Bazoo..   The price was low enough that I could just buy it and not trade.  It’s in awesome shape.. not a fixer.. not a project..  Oh but I can always find something to fiddle with..   Also it fits in the back of the Avalanche ( if I wanted too).  That’s how it came home.  I would rather use the trailer,  less scary when you’re backing up off of.. 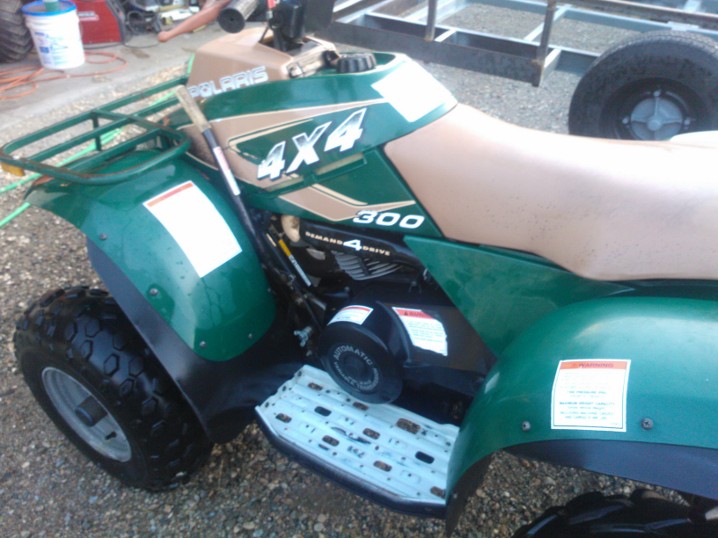 There was some questions as to what model this Polaris is.. a call to MainJet and with the vin # was able to clear things up.. it’s simply a 300 4×4.   And it was purchased new in Deer Park, Wa.  just south of here.. so it’s a US model..  I believe it was bought there and brought here..  so it’s a GF’er .. Cool..  The 288 cc motor is a 2 cycle with oil injection.. Plenty of power and still good on fuel.  No liquid cooling on this one.. just a fan when needed. 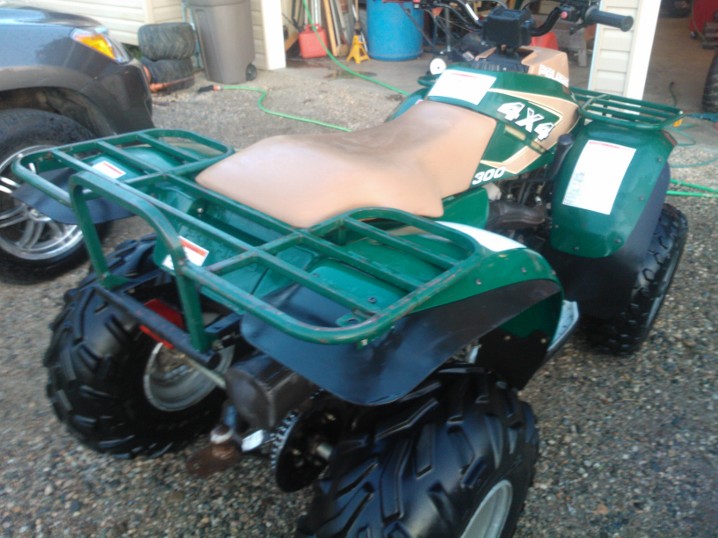 The Green & tan kinda grows on ya..  Look at the seat.. other than being dirty.. it’s in good condition for 20 years old.

Now that we are back from our trip to Alberta I want to get caught up..  This Sunday I would like to use the Polaris so I’m giving it a go over.  And that required the removal of some of the plastic..   First: … it runs good  IF you remember to shut the fuel off.  Seams the float in the Carb is not doing a good job and the fuel will flood the motor..  So I’ll need a carb kit to rebuild the carb..  Second: .. The front drive chain did not “just” come off.. It broke.  Not a biggy..  it’s just standard motorcycle chain.  Really… that’s only two things out of a possible many..  Oops I forgot the pull start rope could use another wrap around the pulley..  but it still works.   Everything else is working good.  Dave and I are marveling at how good shape the little Polaris is..  So I’m ordering a Carb kit, chain & air cleaner.. that’s it.  For Now..

More like 5 wraps for the pull starter..  Over time the spring gets weak and won’t return the cord.. all fixed now.   As I was putting the body parts back ..the head light bulb went pop.. and that was that .. These are a special bulb that you have to buy from Polaris..  I’ll have none of that.. so I’m adapting a regular  Brake/ Taillight holder into the old bulb.. this way I can use a LED bulb I have.. If this ends up not working I can easily revert back.    As for the Override switch issue …(the Guy that I got it from thought it normal to push the override button every time you use reverse) NO.. shouldn’t have to…  I decided to disconnect the speed limiter circuit for now..   It stalls the motor ..  So something is not working there..   I’ll have to be careful because this is a safety thing.. preventing you from going too fast in reverse. I also added a 12 volt power outlet.. newer quads have them..  and I’ll need that for my GPS.   Let’s see how the ride goes this Sunday..

Don’t have to go far.. just a 5 min drive and you are on some great trails.  Dave , me.. and my neighbor Brian..  And we choose to just go up behind Valley Heights.  Just over 3 hrs of riding.   Brian’s new Honda..  Dave’s trusty Yellow Polaris Sportsman 500 ..(the one I rode when I first went quading last summer.. see POST) and my little Polaris 300…  The weather was threatening to rain.. .but it held off for the most part..   Great ride..  And the 300 purrrred like a 2 cycle kitten.   Didn’t need 4×4 .. nope.. got along fine without.   The only thing that may or may not be an issue is my front struts.   They bag hard when you “top out”  ( wheel off the ground)  I’ll find out if I need something for that..

Anyway this was a familiar trail for me from my mountain biking days .  The others had not been there before.  So I lead the way..  If I’d had a map we could have made a loop trip instead of doubling back..  But we took a few side roads and checked out the pond that’s hiding up there.  Hey it was fun.. and I wished the weather was better.. and we went longer..

As mentioned at the start of this post there are a few little things to fix..  I got the parts this last weekend..  A new chain for the front drive, a carb kit to fix the flooding issue ..  and a new air filter.   One more thing that I found to be needing is a new fuel shutoff . The 20 year old one has a tiny leak… Can’t have that..  So that’s on order.

If you turn the fuel valve to off.. it leaks..  If you leave it on.. the carb filled up with fuel.. or did till I fixed that.  Also of interest I found a vent hose in the overflow place and the overflow hose on a vent ?  That would not help at all with that flooding !

Here you see the carb all clean and rebuilt.. and the vent & overflow hoses in the right places. The two lines tee together and have a one-way valve.  Their purpose is not explained any where..  I’m thinking of adding that extra shutoff and a new filter.   The new shutoff will be under the seat..  I bought new 3/16 ” fuel line today..  as well.  So all will be good… Just the way I like it..

I decided not to install the extra shut-off.  Keep it simple.  I re-assembled  everything and put some gas in the tank to check for leaks.. none.  Then I fired up the motor to make sure nothing went out of adjustment..  runs good.  So I must have the float adjusted properly…

With the mechanical end of things in good order.. I decided to do a little “pimping”.  I’m building the winch mount .. and I’ve repainted the racks.

The green paint was wearing off … and I like the look of the satin black..  it matches the frame.  I also installed the new bag I bought for the rear rack..

But it works..  I’ll maybe get a couple of small tubs to put inside .. hold some tools & stuff..

This quad never had a winch..  So I had to start from scratch.  There was lots of room up front.. so I built a holder.  It’s just a small 1500 lb one.. but the quad is light.. and the winch was a price I could live with..  A nice little roller fairing in front..  and there you go.  I always carry a tow strap as well and I’ll have a “snatch block” which doubles the pulling power.. if needed.  I’m not one to go places I’ll get into trouble.. But one never knows !  Boy Scout rule applies here..  The other rule is don’t get lost… ! 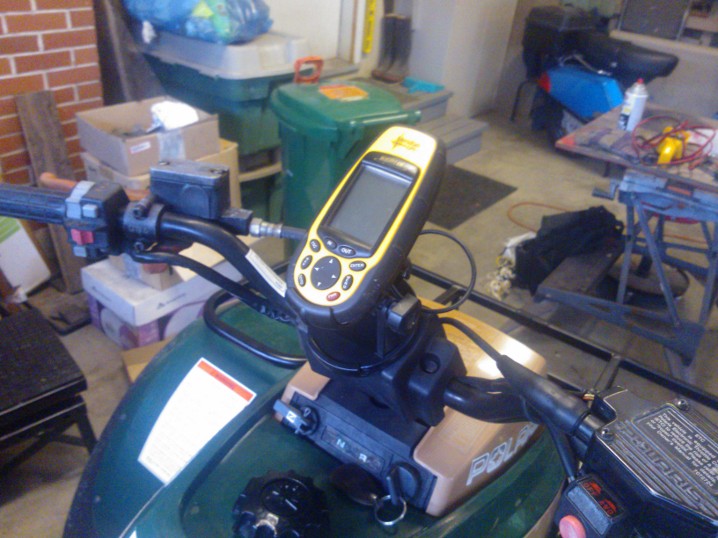 So my GPS is also there when I need it..  powered by the 12volt plug and I will mostly use the trip / speed feature.   Would be nice to have a new one that had topo maps.

As the Summer goes on:

I’ve gotten out on a few great rides.  Been to the top of a few local mountains.

Old lookout towers are on a few peaks, so there is a trail to the top.  Like Mount Morrissey in the above photo.  This is the highest peak between here and Christina Lake.  We’ve explored a lot around the Phoenix area too.   Lots of good trails up there..   And the last trip (with the ATV club)  was to Renata on the Arrow Lakes.  A long 120 km ride which really challenged the little 300.   My tank of fuel won’t last that long..