Once again you can call me CRAZY ! But we are calling the Chevy  ” BOB “ 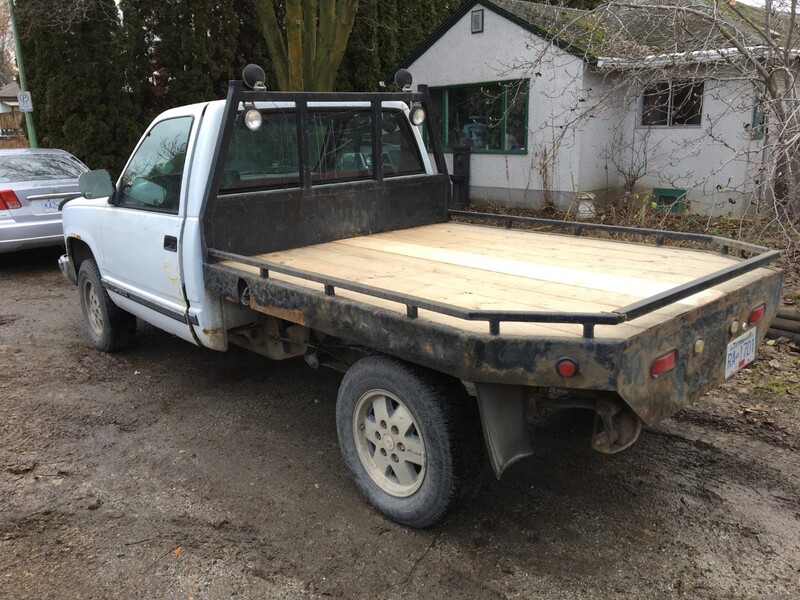 This time I do not have a glamorous photo of this truck from the web of what it should look like.. That doesn’t exist.  YET!  It will when I’m done, but for now it’s all in my head.  This truck is …well unique. Yes it’s old and in need of some fixing up, mostly cosmetic ..  And certainly a flat deck truck is not rare… there is lots of them..  But they are mostly different from each other.  This one was home built on a half ton 4×4 long box single cab.  Most are one ton trucks.  SO do we have a hillbilly one.. Almost!  The deck is quite nice.. And the frame is very strong and seems professionally made.  BUT.. they bobbed off the rear of the truck (hence the name) and made it too short for my liking.  So My plan is to extend it.  But I’ll still call it BOB. 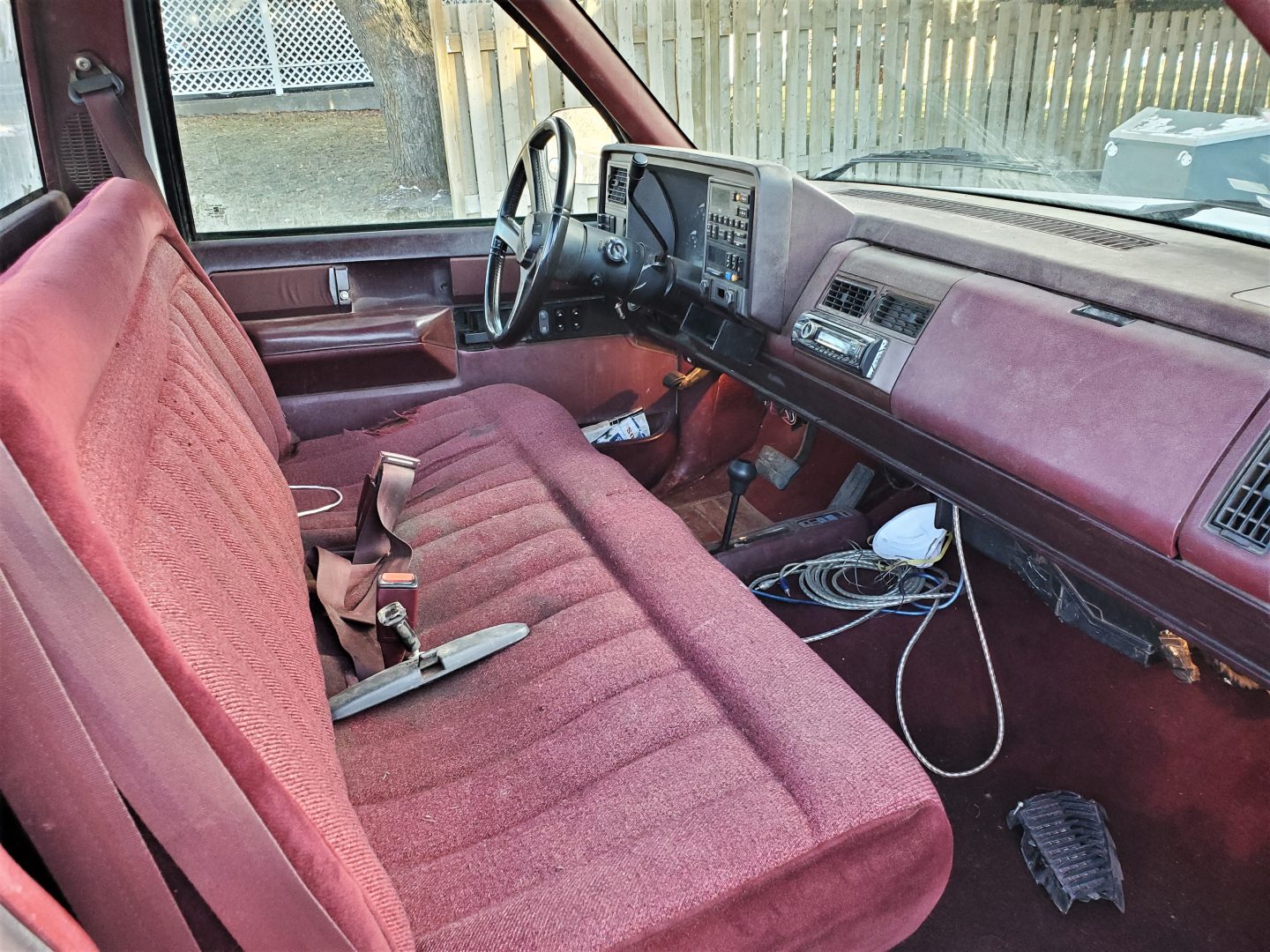 Ahh you gotta love the eighties..  Put your hand up it you had a car or truck from then that had a red interior… and I mean totally red ! My hand is up..  Red 1985 Dodge Caravan..  I’ll get used to it…again.  Good thing cause changing that would be a lot of work… and not necessary… So I’ll embrace the redness.. 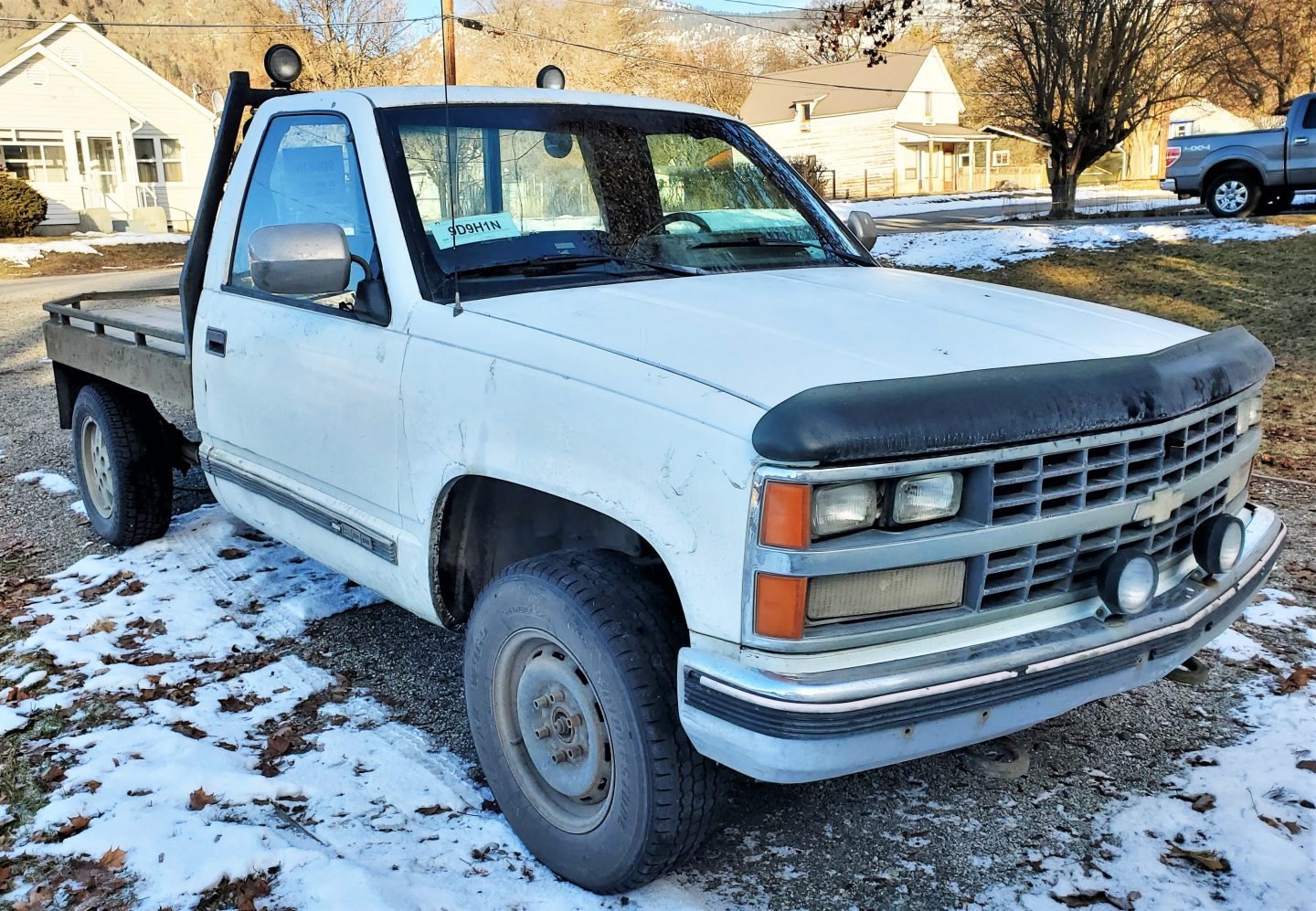 Just like the Surf Side trailer if you start out not paying much.. or anything , then you have more to spend on making it right.  Quite often you could spend more to buy a nicer truck and still end up spending money.  Bottom line is I don’t expect much in a cheap truck.  So I feel lucky that it made the 2 hour trip back home and has BC registration.  And add to that… It runs good.. shifts good.. stops good. The important stuff works.  That’s the “Pros”  what about the “Cons”.  Well here’s what we know so far.  Motor needs an oil change. (should do that anyway).  Steering needs work (loosey goosey). The gauge cluster will be changed out (other gauges work fine).  The muffler is supposedly new but the tail pipe is missing, and it’s a bit loud for me.   Driver’s door is hard to close.  AC needs a re-charge.  Needs better tires and a new rim so the spare can return to the back.  At first we thought a leaf was missing from the rear springs.. Nope..  The ride is very nice.  However if you want to carry weight you need all the spring leaf’s there.  I’ll replace the doors and new pins and maybe the left fender cause they are rusty and easy to source.  There are a few bits inside that need fixing or replacing as well.  But let’s talk about the one thing I really want… The rear deck.  I was looking at trucks that I would have to remove the box and build a deck from scratch.  Totally could do that..  But here we have most of the work done for me..  For less money ! However needs a bit of “alterations”.  And paint ! 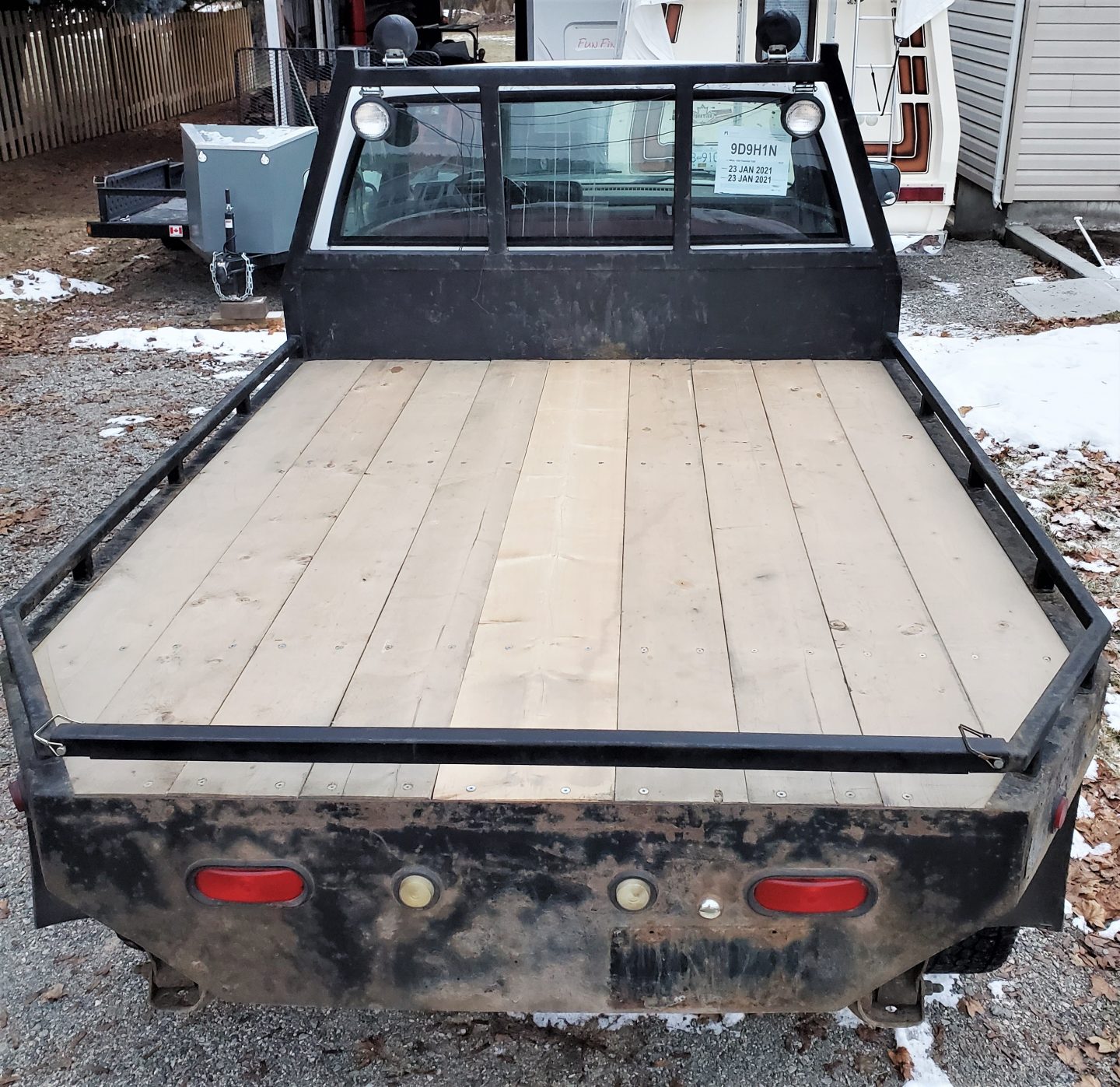 What we have is ..  6 ft wide.  Perfect !  But only 7 ft 4 inches long.  I would like a minimum 8 ft long.. but lets add to that..  Let’s add a foot to make it 8 ft 4 inches.  And add that to the front so as to keep the back end shape. My RZR will fit very nicely.. The headache rack is perfect too.. Couldn’t have done it better.  Those rails will be removed and stake pockets added with a rub rail.  Also missing is a receiver hitch and the wiring for that.  All of this means I keep the nice new decking.  The extra foot would be plate steel with a strong winch mount against the head board.  There I want at least a 10,000 lb winch.  I love making plans..  So let’s make more..  I have thought about the way I would like things to be.. Useful , Adaptable,  come to mind.  More Ideas.. 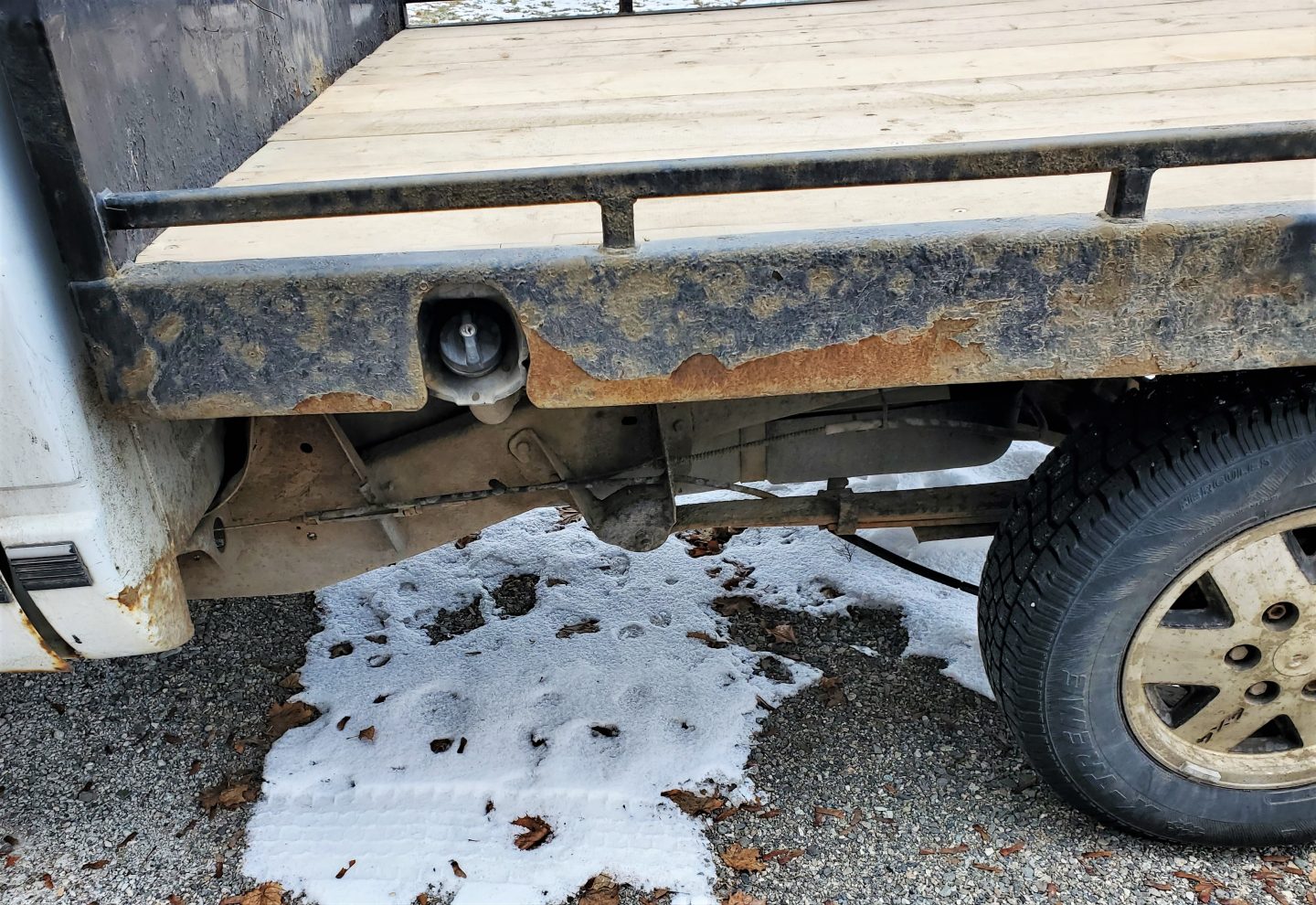 On this ..the drivers side I wanted the spare tire holder.  But I’m thinking it won’t fit .. so a storage box. ? 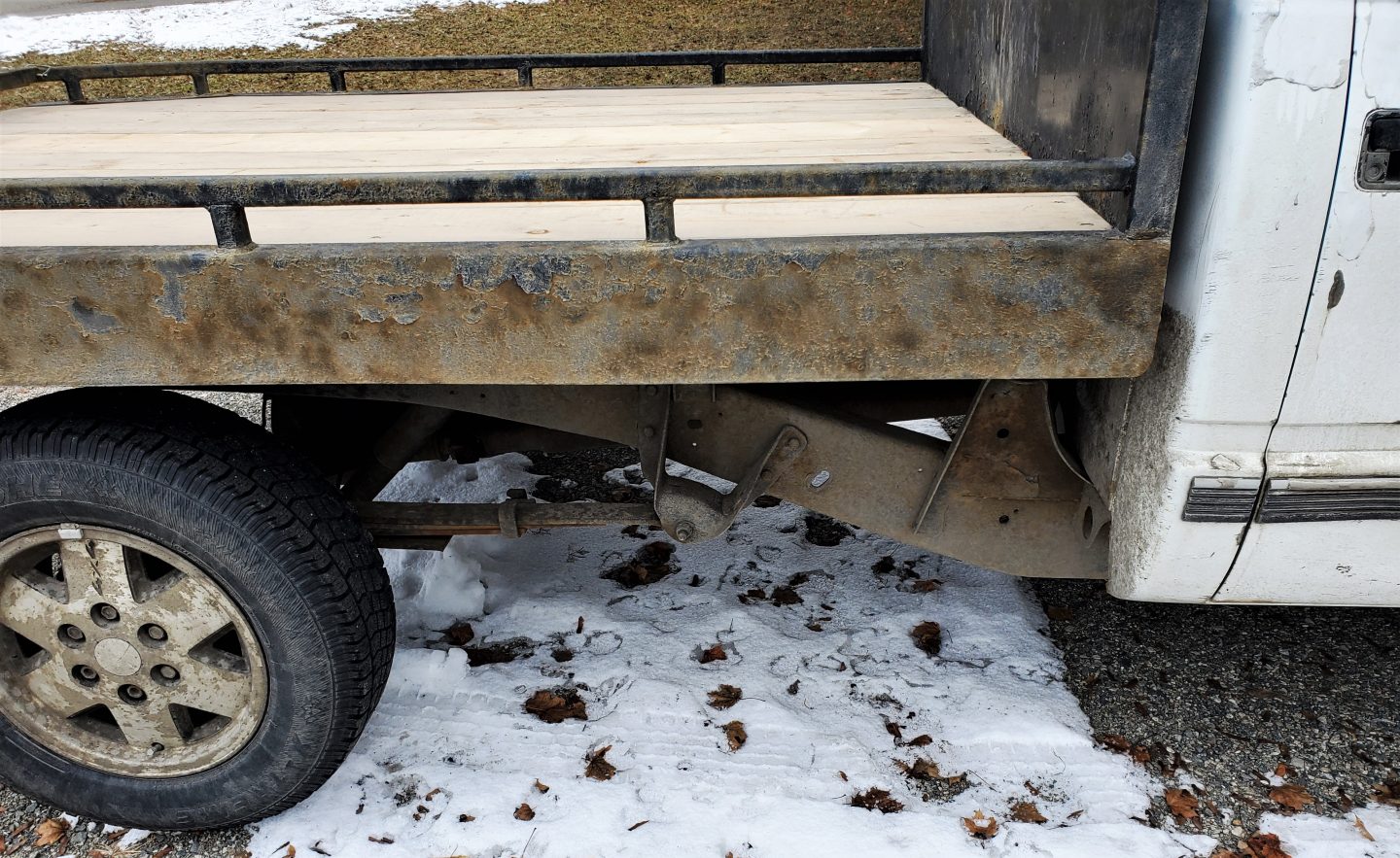 And on this side (passenger) I want a lock box for a second battery, storage and some other goodies I have in mind.  This battery would have an isolation solenoid and power the winches and a 1000 watt inverter.  That way I’ll always have the truck battery fully charged, and power for other stuff.  So far that’s my plans… could change !

For now The truck will have to wait it’s turn..  BUT while it waits I’m collecting some parts..  Newer headlights with bulbs to replace the old school sealed beams.  The cubby that replaces the old factory stereo heat unit.  A new instrument cluster with the same kms on the ODO.  BUT most of all a nice set of bucket seats with a center console to replace the bench seat.  Many more bits and pieces. If it’s cracked or broken I’m replacing it. PLUS I have on order: A remote keyless system.  A back up camera and monitor.  New door switches. New mirrors for towing. 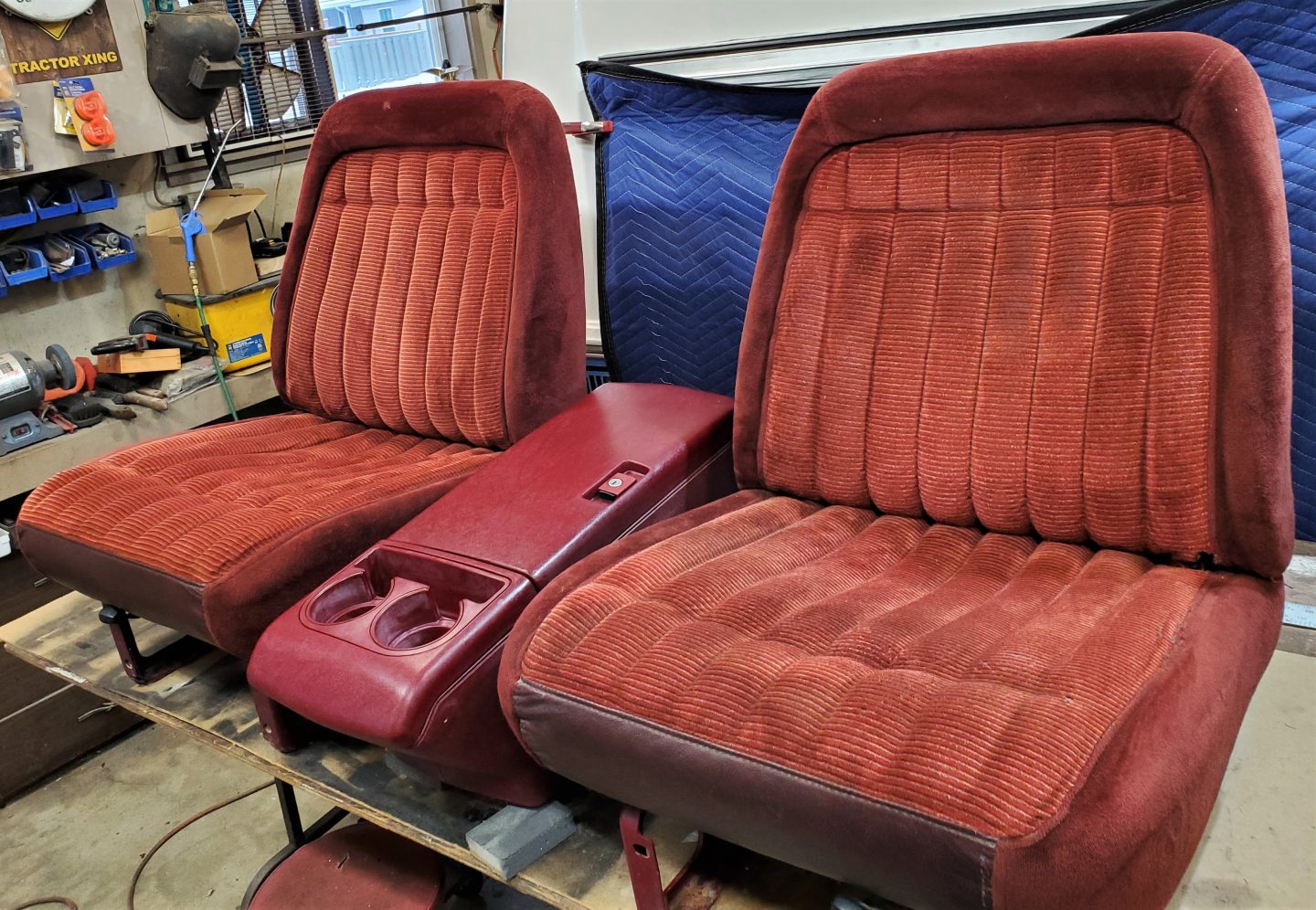 And a console !  With cup holders !  Good condition for being old.  Don’t  want three people in the truck.. so this suits me just fine. 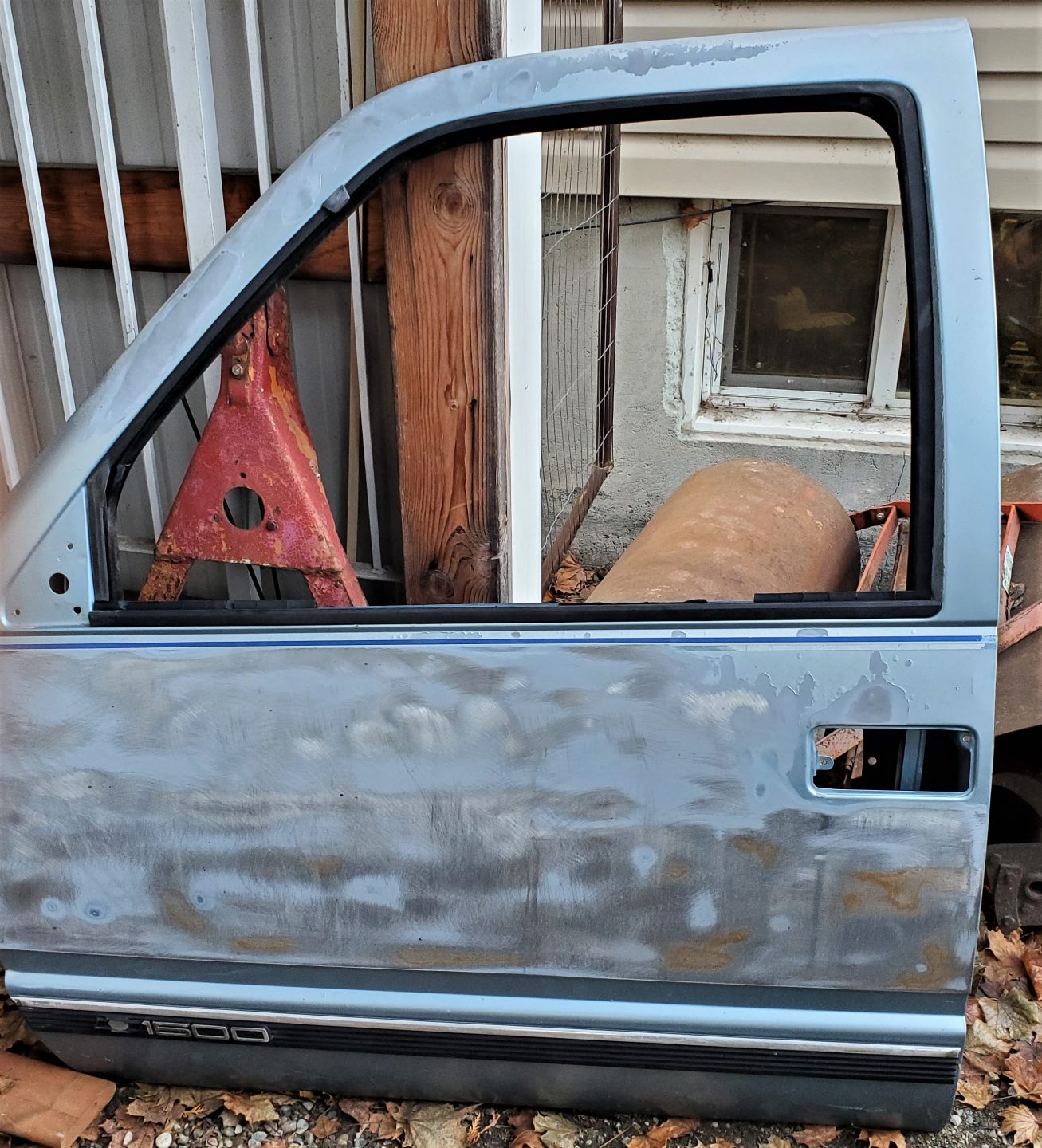 Well nothing for an old truck is really new,  but these are WAY better condition.  Bob will get a new white paint job, so color won’t matter for these.  I also found a fourth rim to match the others.  Now I have four nice rims and one spare rim.  Got quite the stash going on. And now added to the stash is a 1200 watt inverter, and some fancy chrome rims much like the ones on my Avalanche.. 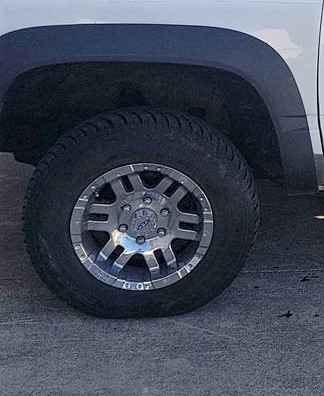 Sweet!  But wait… there’s more.  My friend bought another parts truck and won’t use the frame ..so there’s the missing part of my frame OR swap frames.  Ether way I get a very nice rear bumper. Here’s Some of the parts that will be an upgrade. 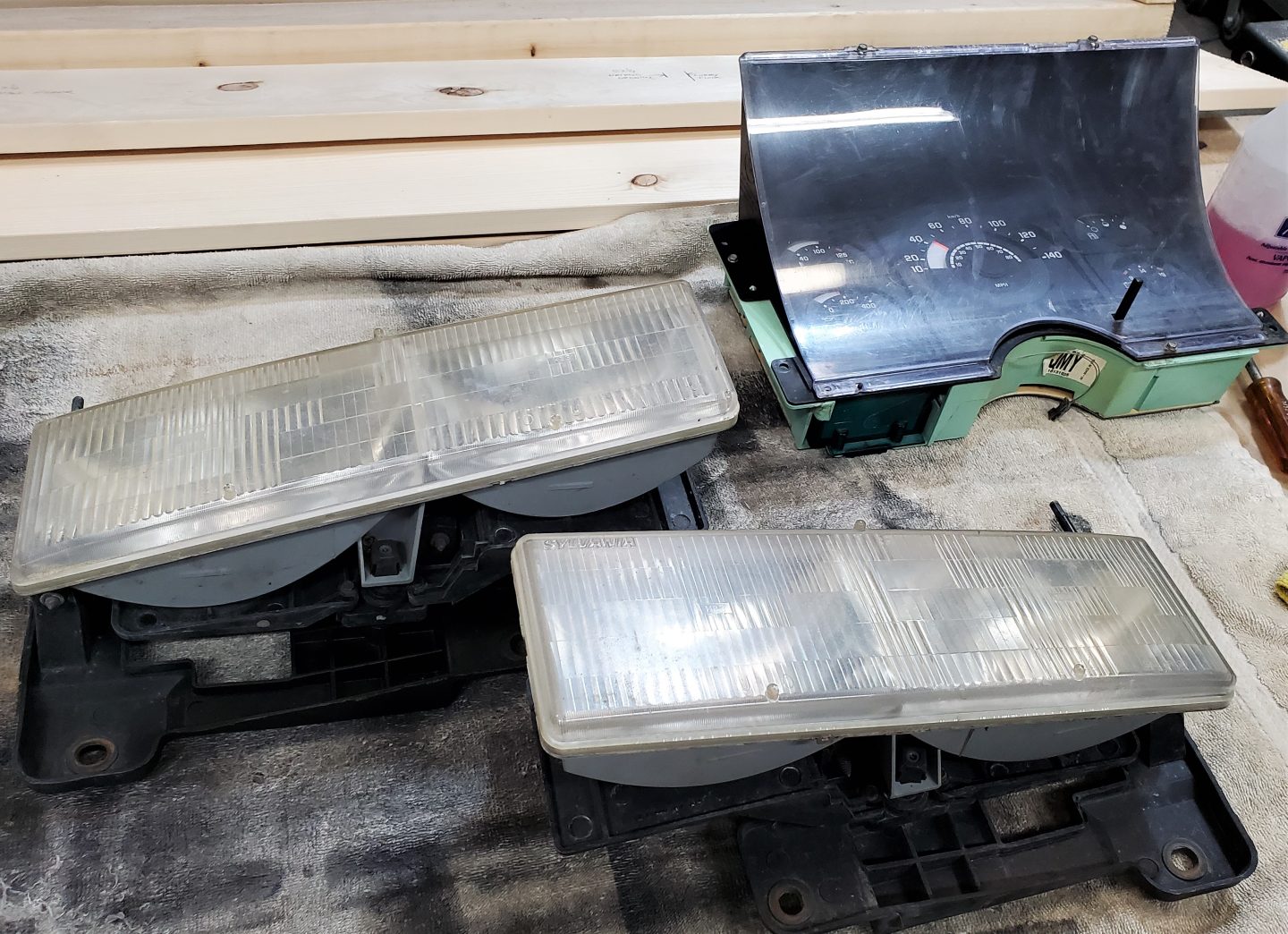 These are headlights from a newer truck that have halogen bulbs. The gauge cluster pictured has working ODO..  I’ve ordered new LED’s for gauges.  The headlights will get a polish and be like new, with much improvement.

Today we went and picked up a 1996 extra cab 4×4 with a bad transmission.  Local truck so we trailered  it home.  This is the truck that has the wheels I’m getting.  Harold bought the truck very cheap for the body panels..  box , doors , fenders and hood.  And the interior too.  That’s all he wants.  He does not like the 5.7 vortec motor.. and it would not start in the cold anyway.  I pitched in some of the money so the rest is mine. 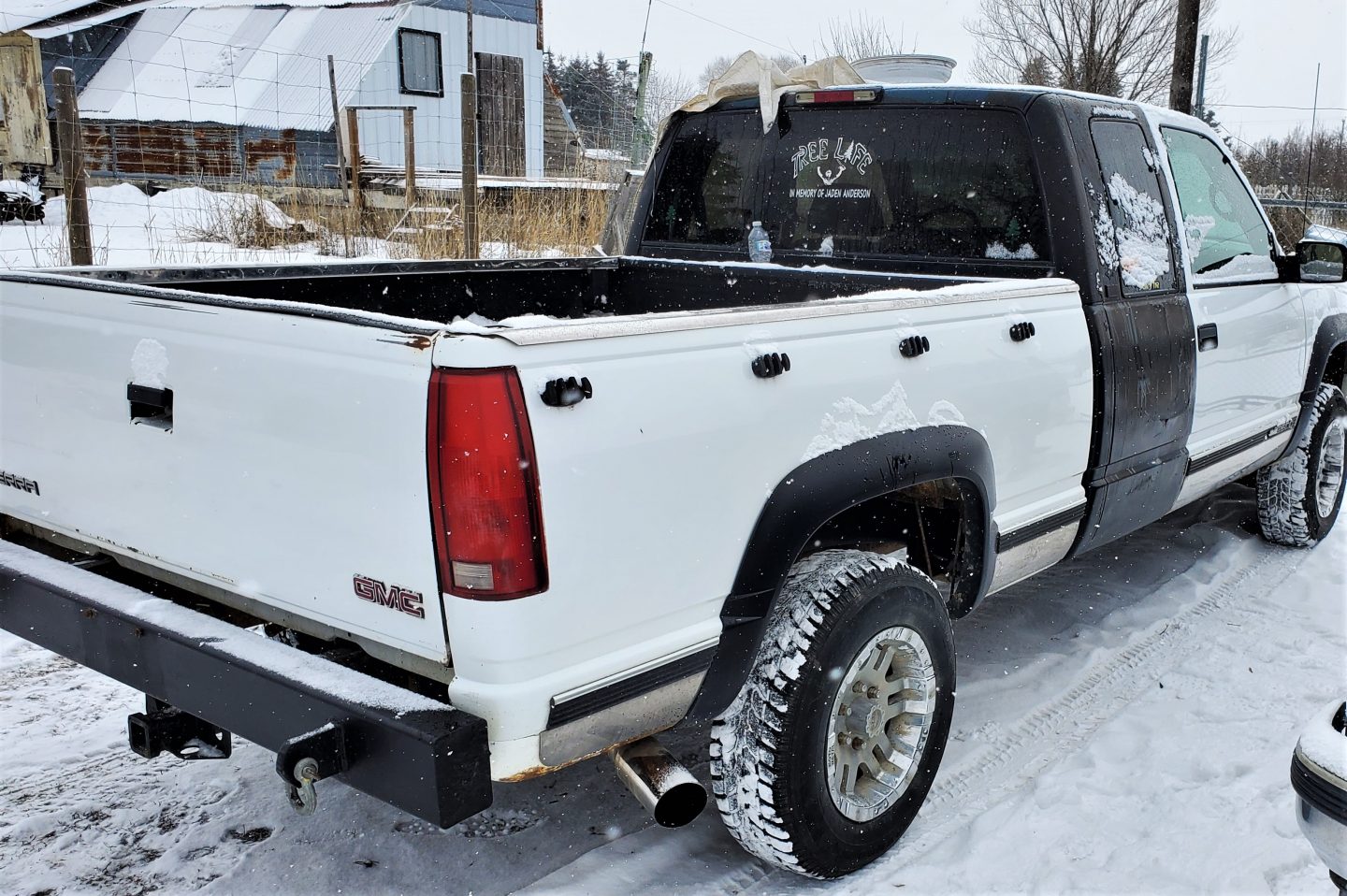 So… this was a dark green truck at one time..  and all the white stuff was from another truck.  Great condition. He’s going use those body parts to build another regular cab short box 2 wheel drive truck.. His favorite kind. Today we also removed the motor from the frame he will use.  Now … once the truck above gets stripped of all it’s parts ..that leaves a good rolling frame..  a long 4×4 frame.  I’m considering moving all Bob’s body over to this frame. Because it’s not “bobed” off.  And it has this awesome rear bumper. 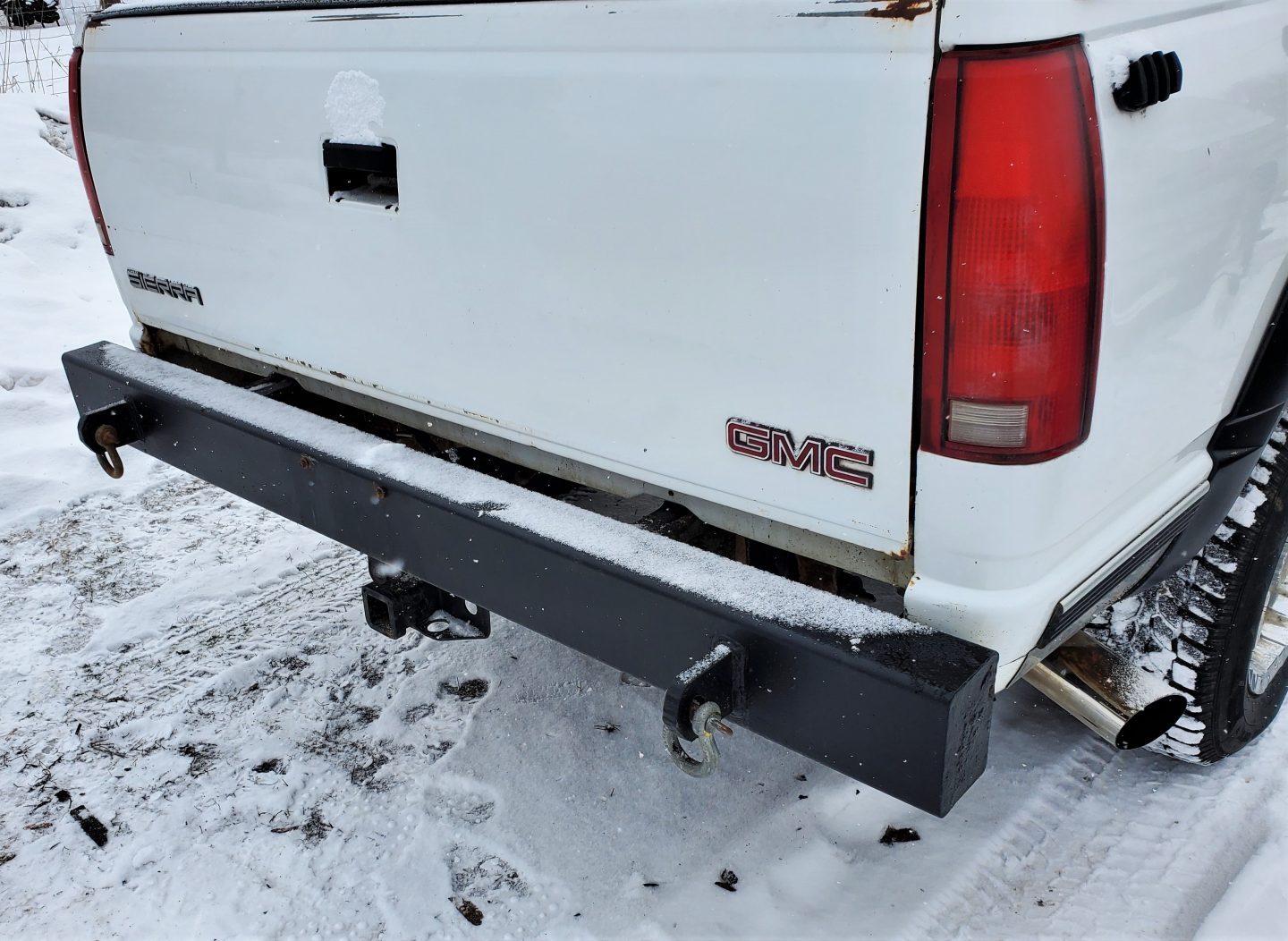 With a good hitch !  The wheels and this bumper are worth what we paid for the whole truck ! Someone did a great job fabricating this bumper.  By making a swap like this BOB can be more than a painted truck..  It will be like new.  Finally after a month I made a video…

I also fixed a few things on the dash.  Using some re-conditioned parts. 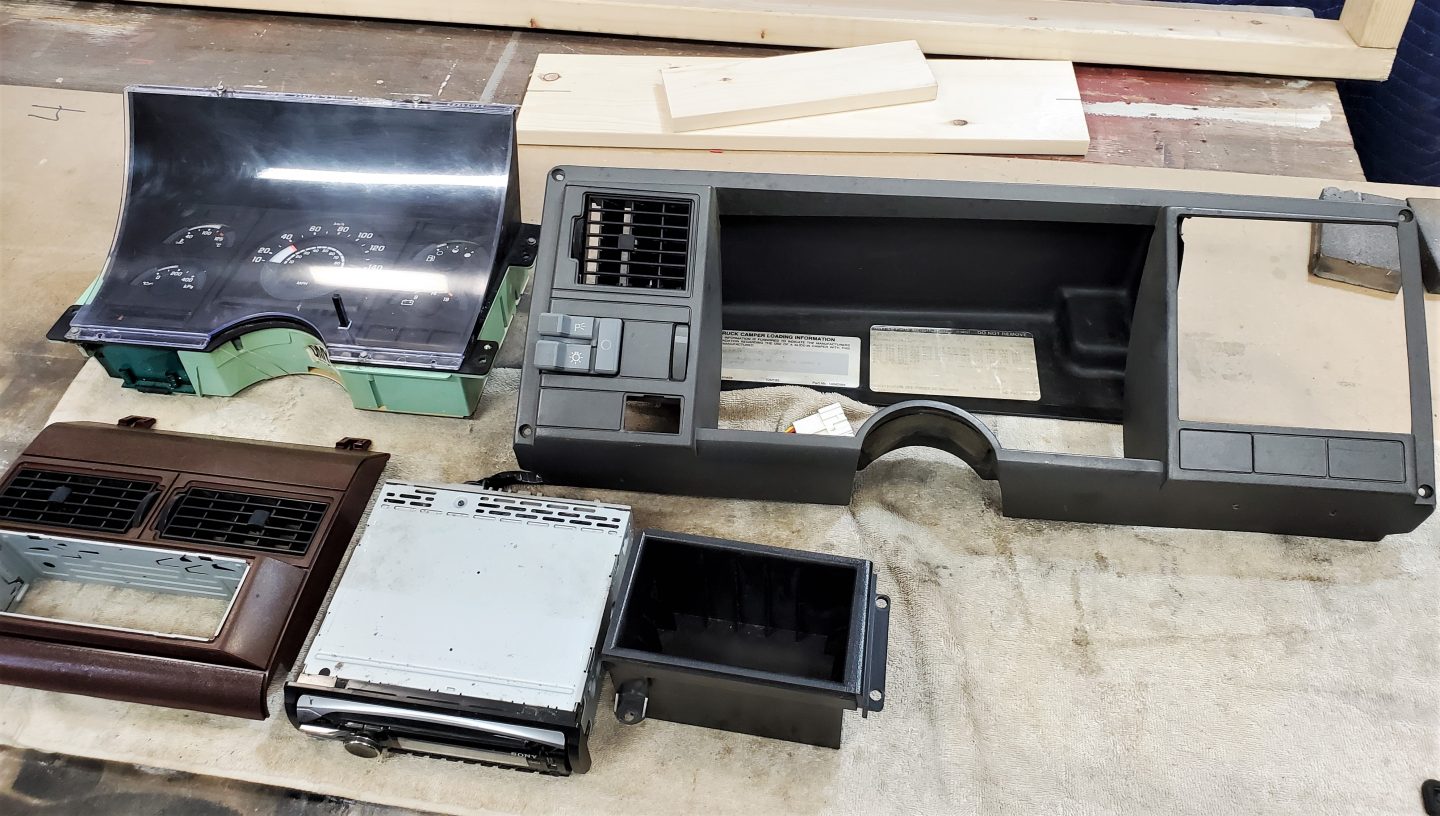 The dash pocket, gauge cluster and the dash bezel are from a donor truck .   The stereo and mount were in the truck but not installed properly.  Since I knew what I was doing I took this much of the dash apart, and removed some messy wiring ,  Plus redo the stereo harness.  It wasn’t soldered ! and some of the wires were pulled apart.  Then I put it all back with better parts.  Now the glove box opens and closes without falling on the floor!  And the stereo is in the dash all the way instead of hanging out…  all speakers work.  This is how things will stay for now.  After the Surf Side trailer is finished then it’s truck time. !  and I’ll start a new page..