Before I start work on the trailer I went about how to get the registration..  No luck.. Of coarse I did not get the registration with a free trailer nor did I expect too.  And preliminary searching shows  BC registration could not be found anyway.   I could pay to have a deeper search, which could also show nothing. but would give me the paper work to get registration in my name.  OR just fix it up and get U-build registration..  easy to do if you are replacing lots of parts. but I’ll deal with that later.   Check these out.

Ordered these on line … a sale .  Grab em while you can..  New wheels and tires is on the need list.  There is no spare so one of the ugly ones will work. 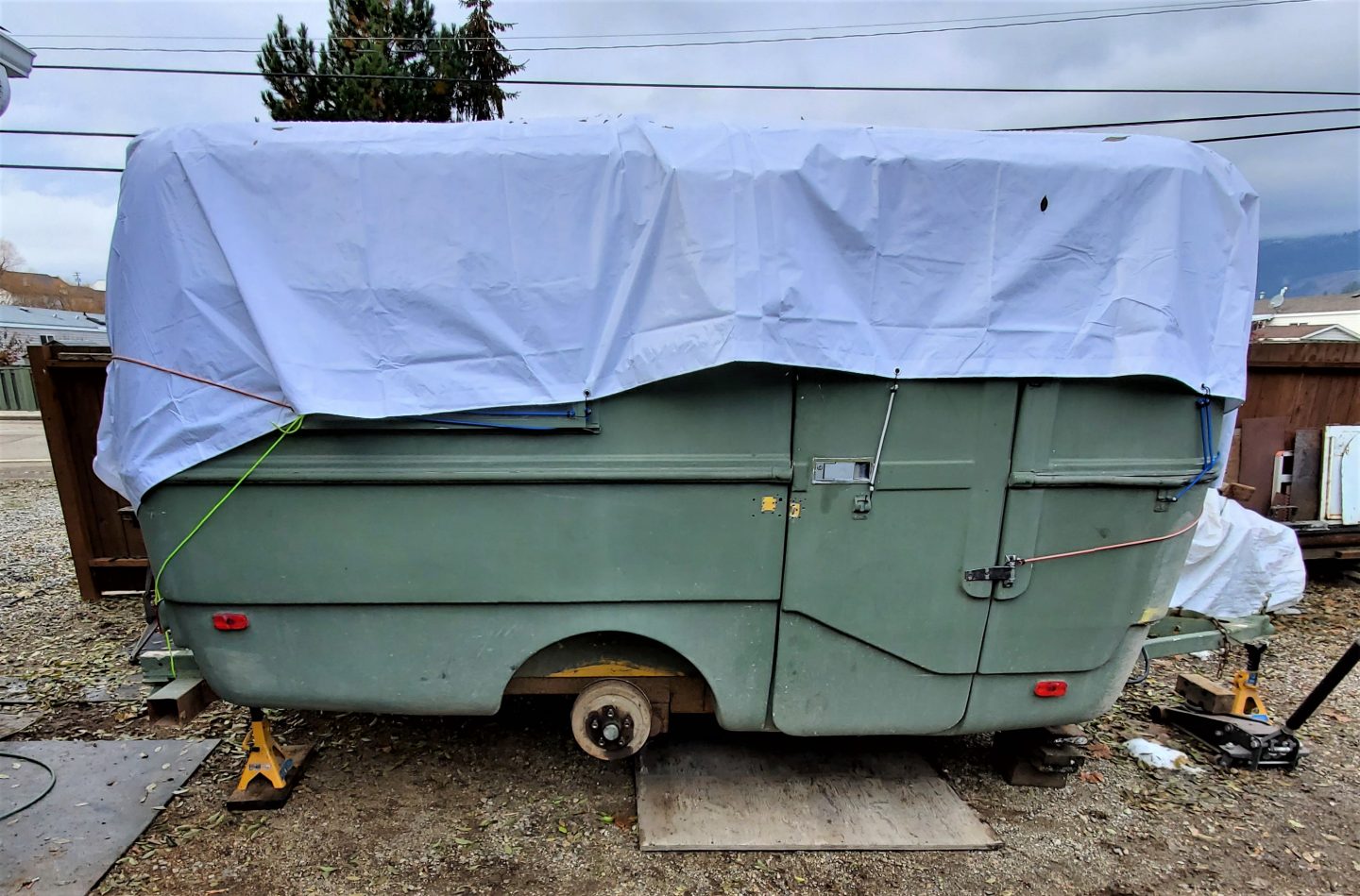 Time to separate the body and the frame:  Here you can see I’ve lifted the whole trailer enough to remove the wheels.  Then I got under and removed the propane lines and cut the six bolts holding the body to the frame.  They were rusted bad.  Then we lift the body up off the frame… then drop the frame to the ground ( no wheels) and pull it out the front.  The body then gets lowered on to my trailer dolly.  Wheels back on and the frame goes on the lift. 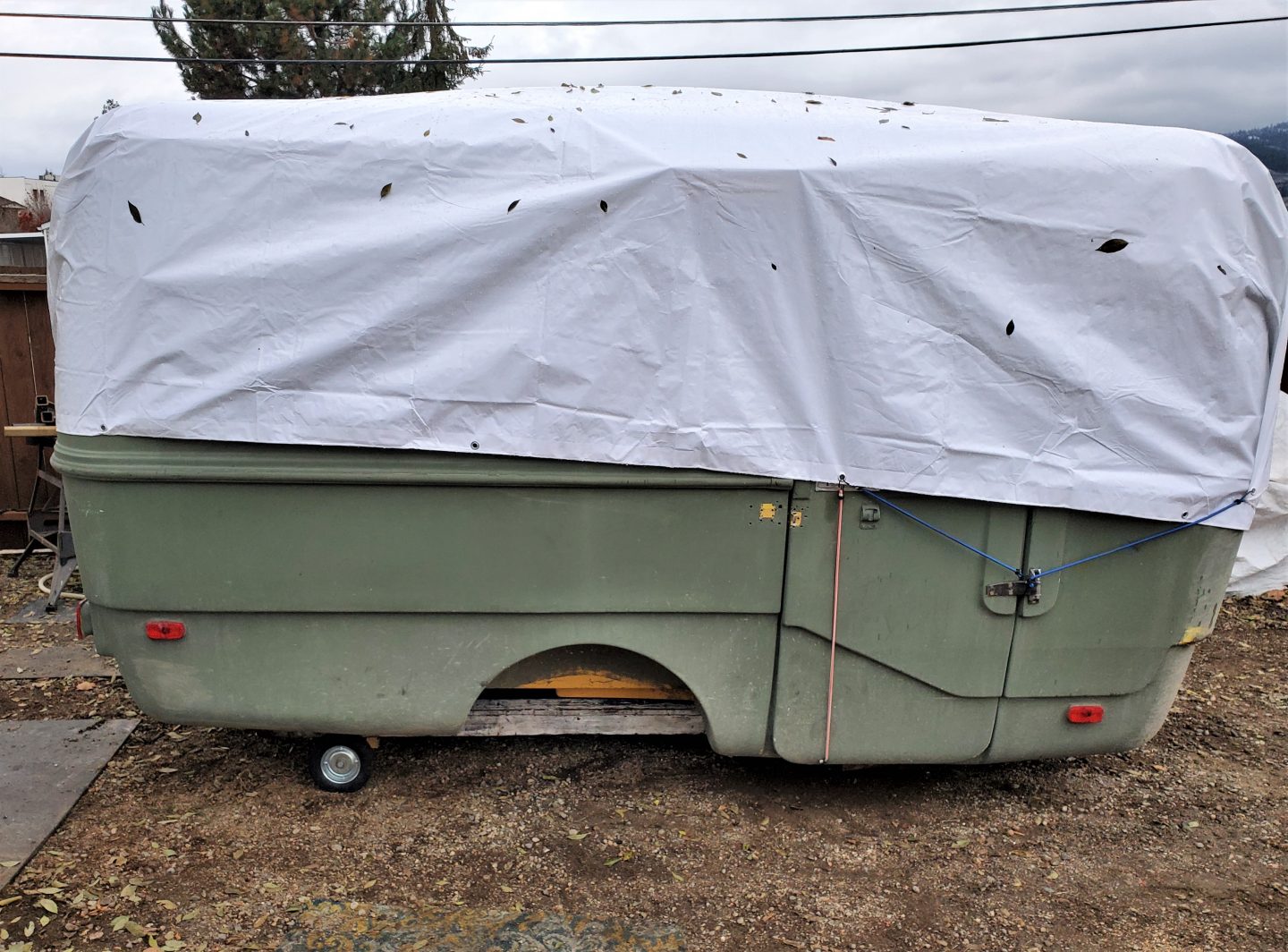 Body on dolly ..  Hope it fits through my door later. 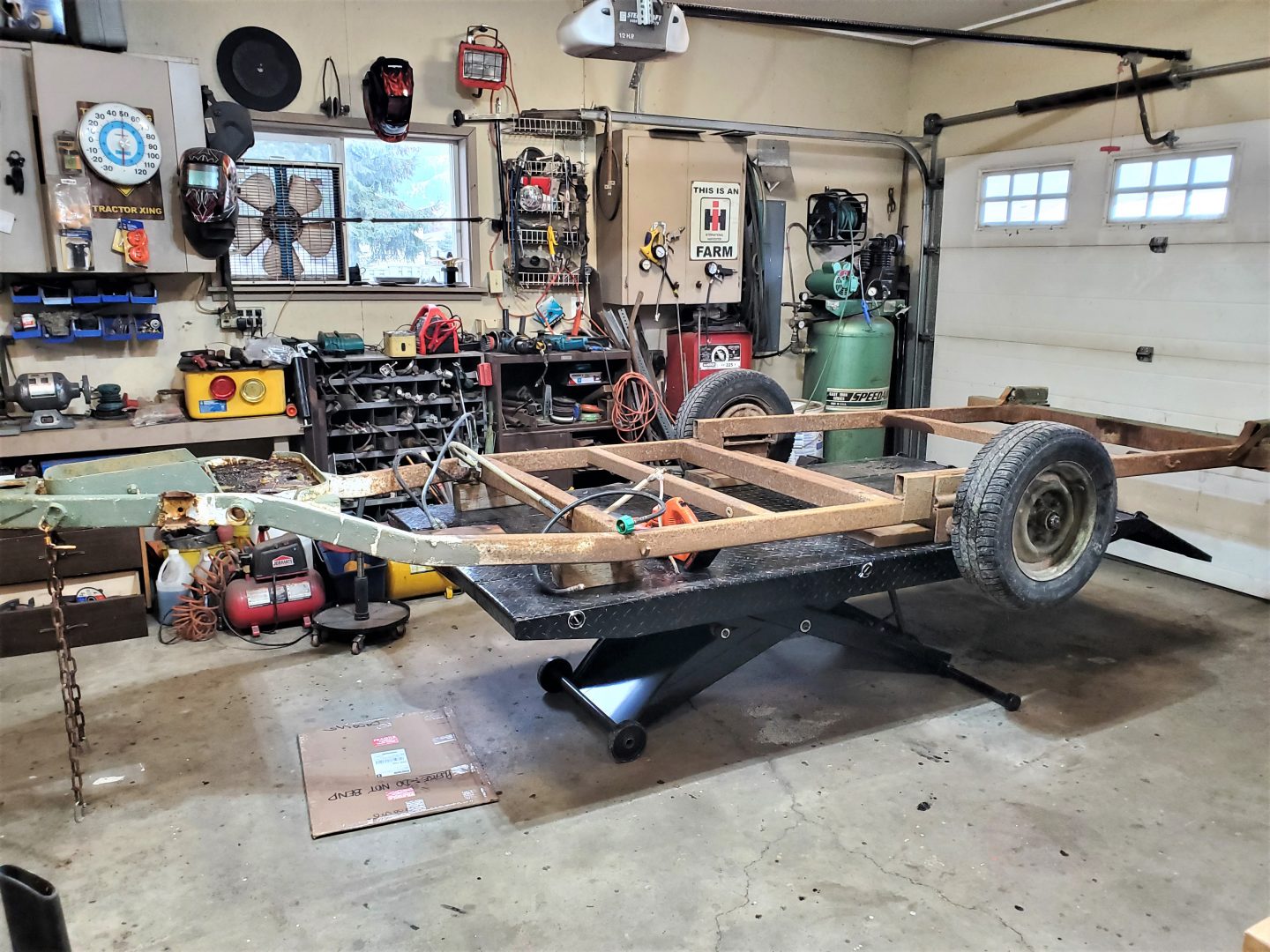 The frame is now in the shop. Isn’t the lift great.. Don’t have to get down on the floor.

The initial inspection shows no issues..none.  except a dent in the front cross member. 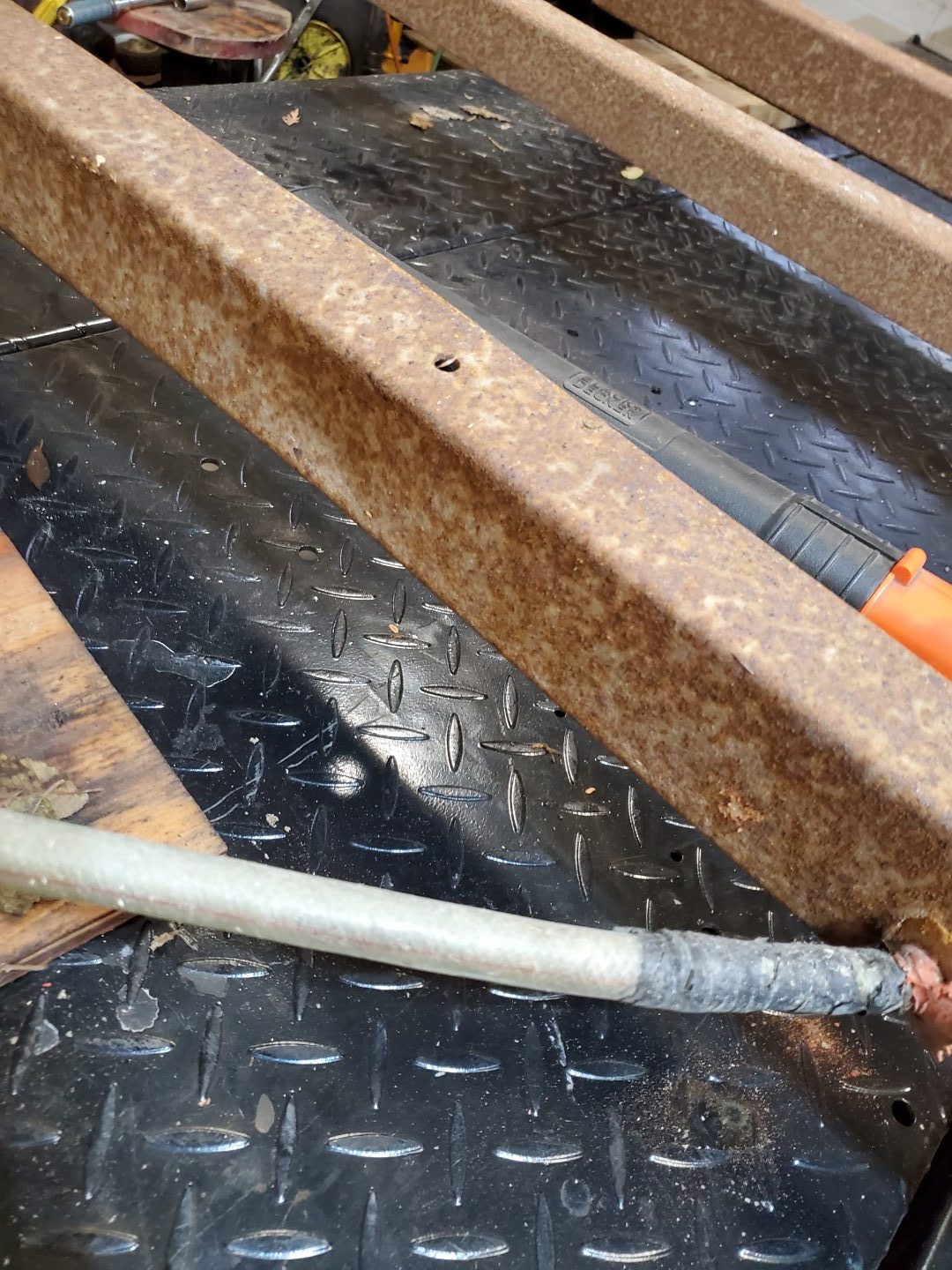 Not a big deal..   There is only some modifications that I want.   And a good paint job.  Oh and rebuild the brakes and hubs.  First is the rear bumper and the appendages on it.  The stabilizer jacks are bent, frozen and mounted upside down ? 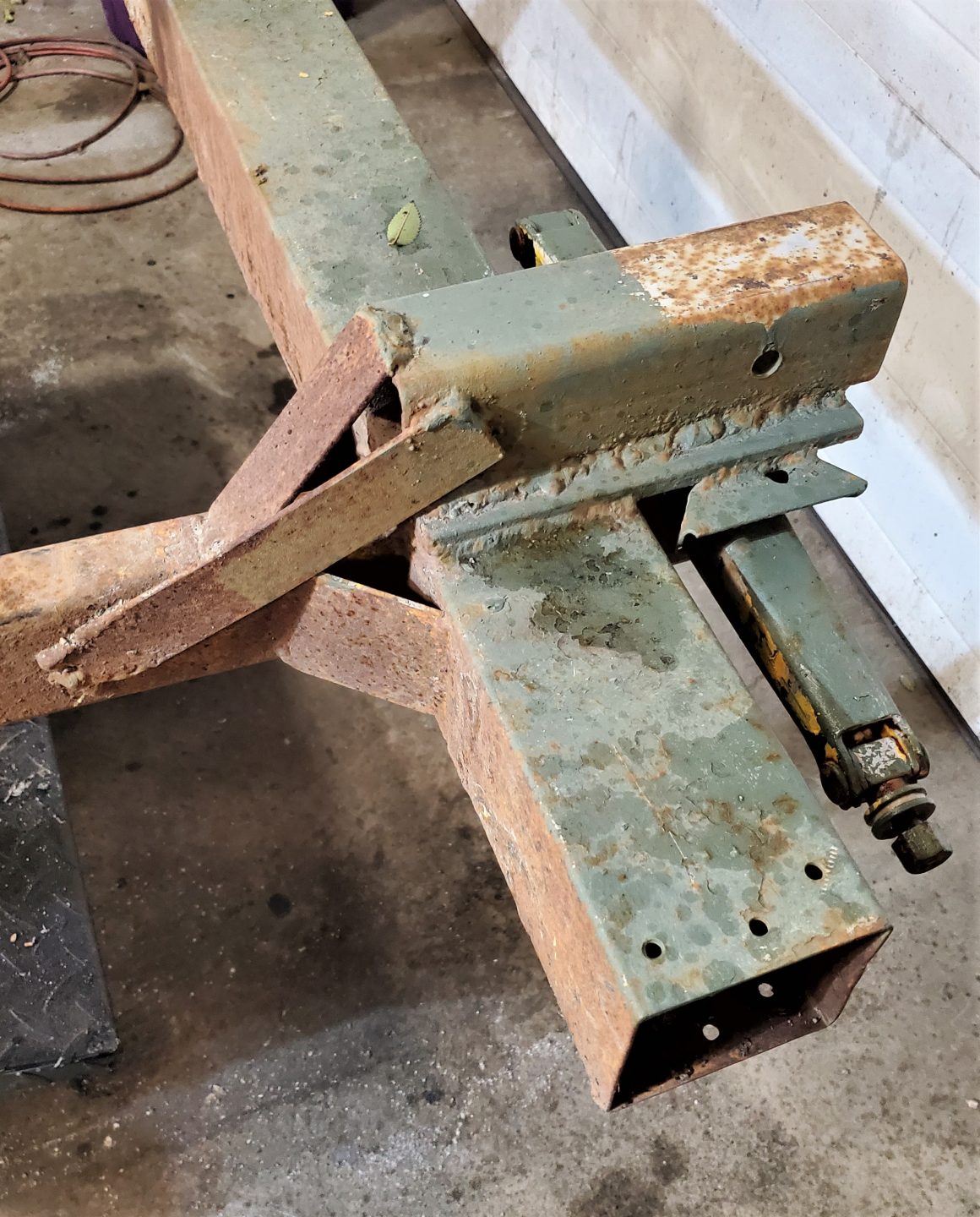 And those braces ! Yuk !  Out comes the cut off wheel for this mess.  Those are 2″ receiver tubes..  strange. I’ll be sure to save those. Better !  I do get why they mounted the jacks up behind the bumper..  Protection !  Anything mounted under the bumper could get wiped out ..  it’s low to the ground.   Now to fix up the tongue up front. 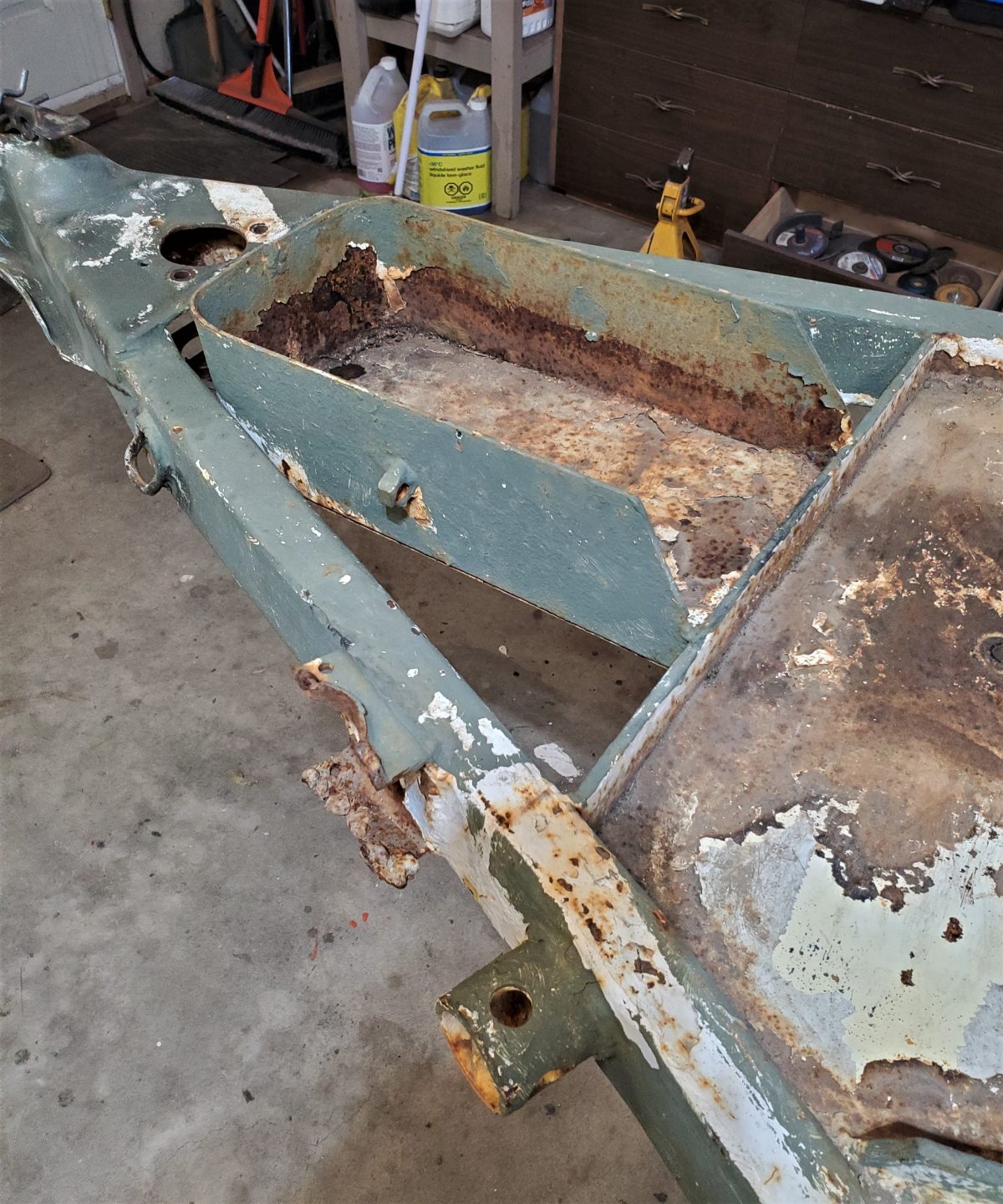 Just a few things to fix here..  Those jack mounts will have to go.  And the battery box too.  I’ll make a new holder going across for the battery. 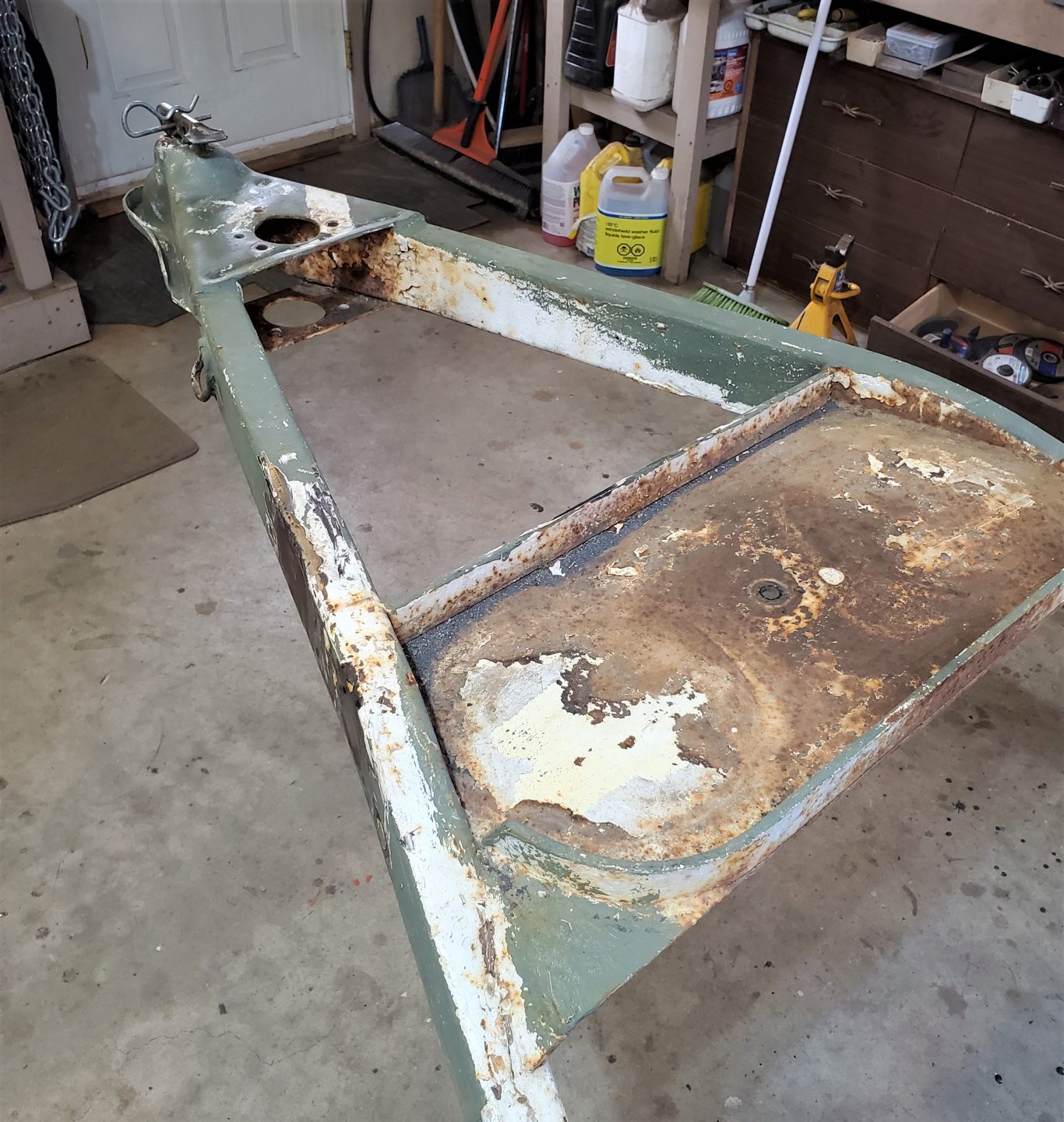 All cleaned up..  Ready for new stuff.  But first I focus my attention on the wheel hubs and the brakes.  Even though they work I know there is rusty parts and a needed inspection of the bearings.  I’ve done this many times… even have the brake removal tools.  Sure enough the brake adjusters are seized and dirt, rust and even spider webs in the drums. 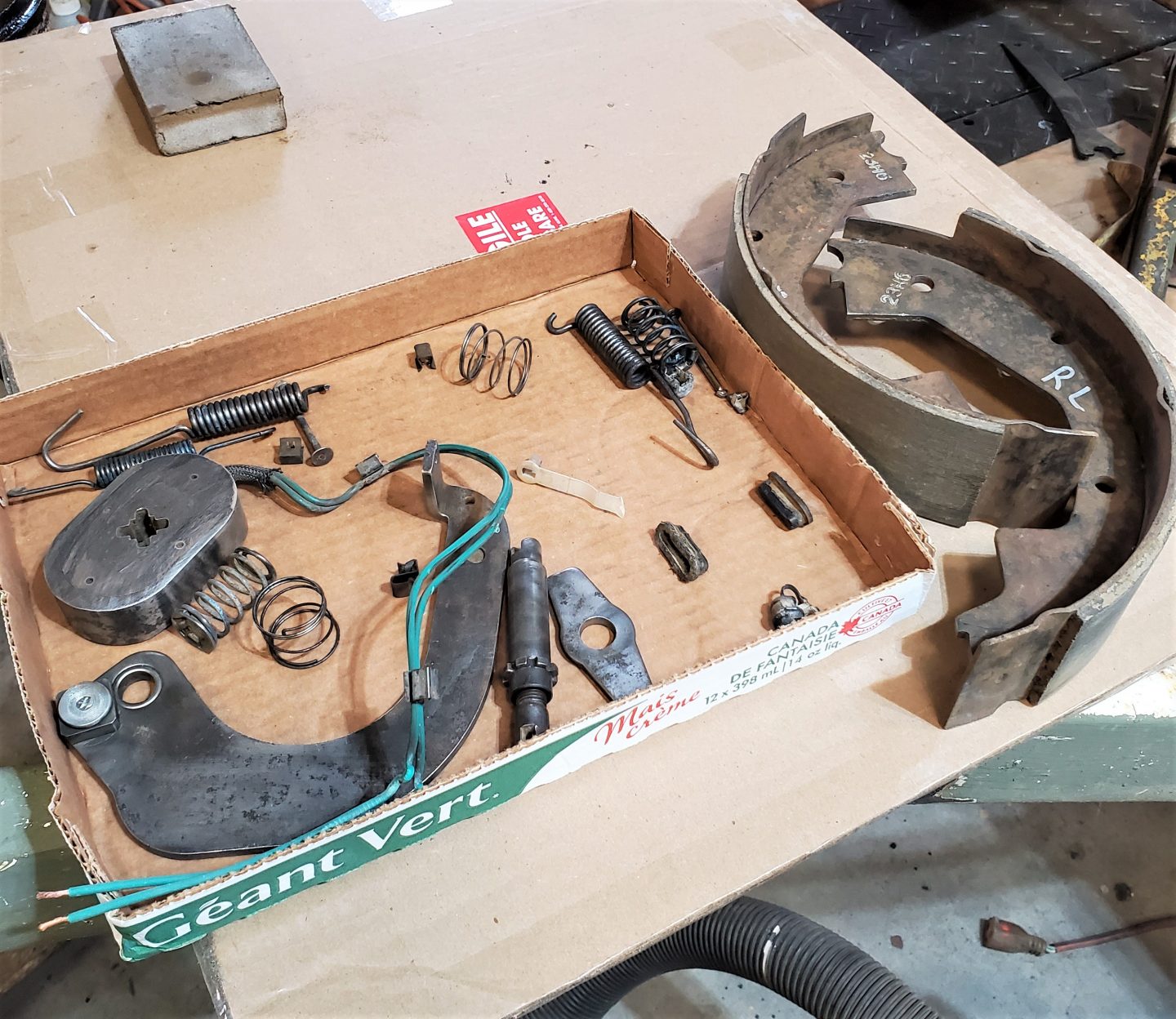 So every thing gets the royal treatment..  and some get paint too. 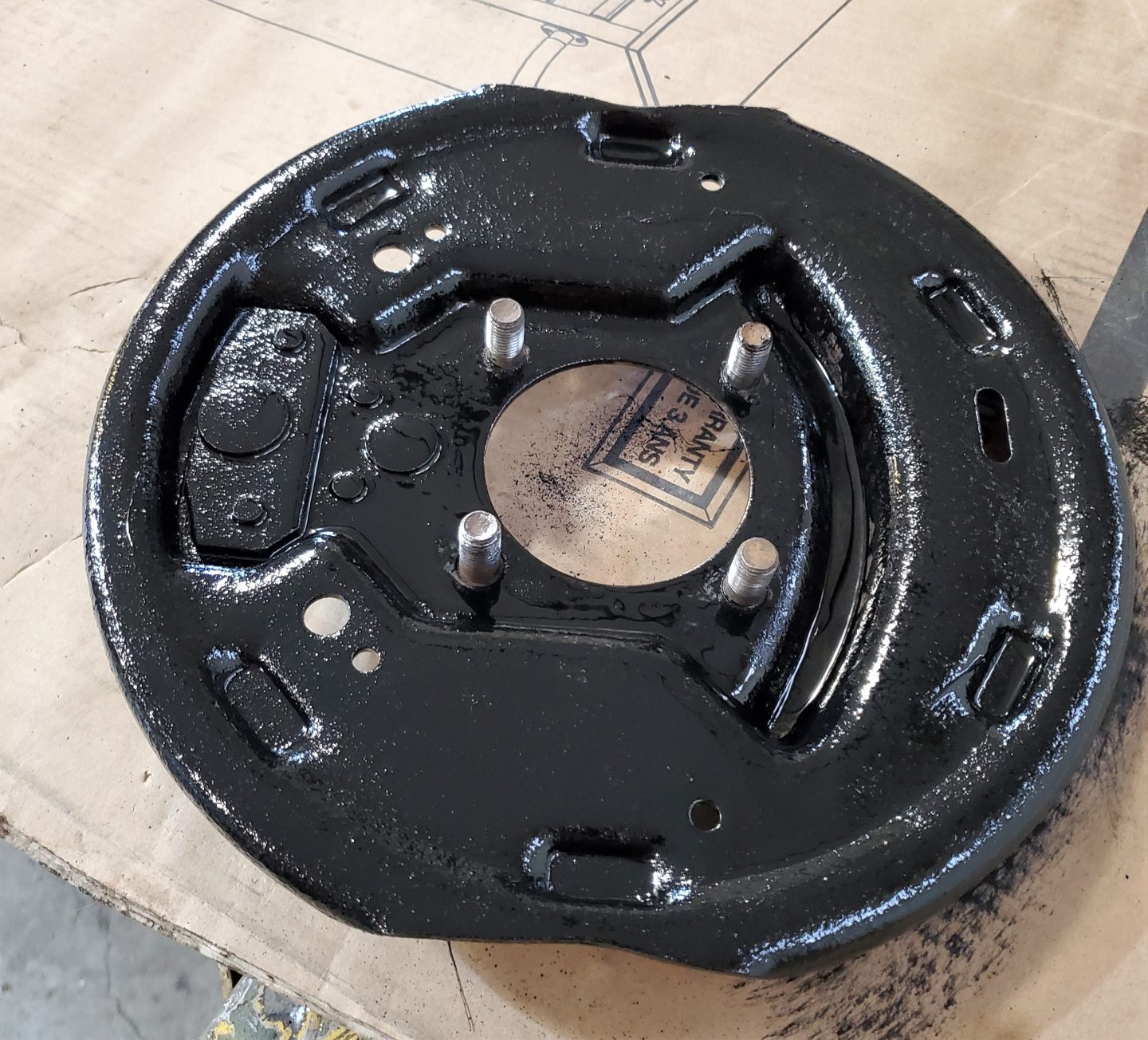 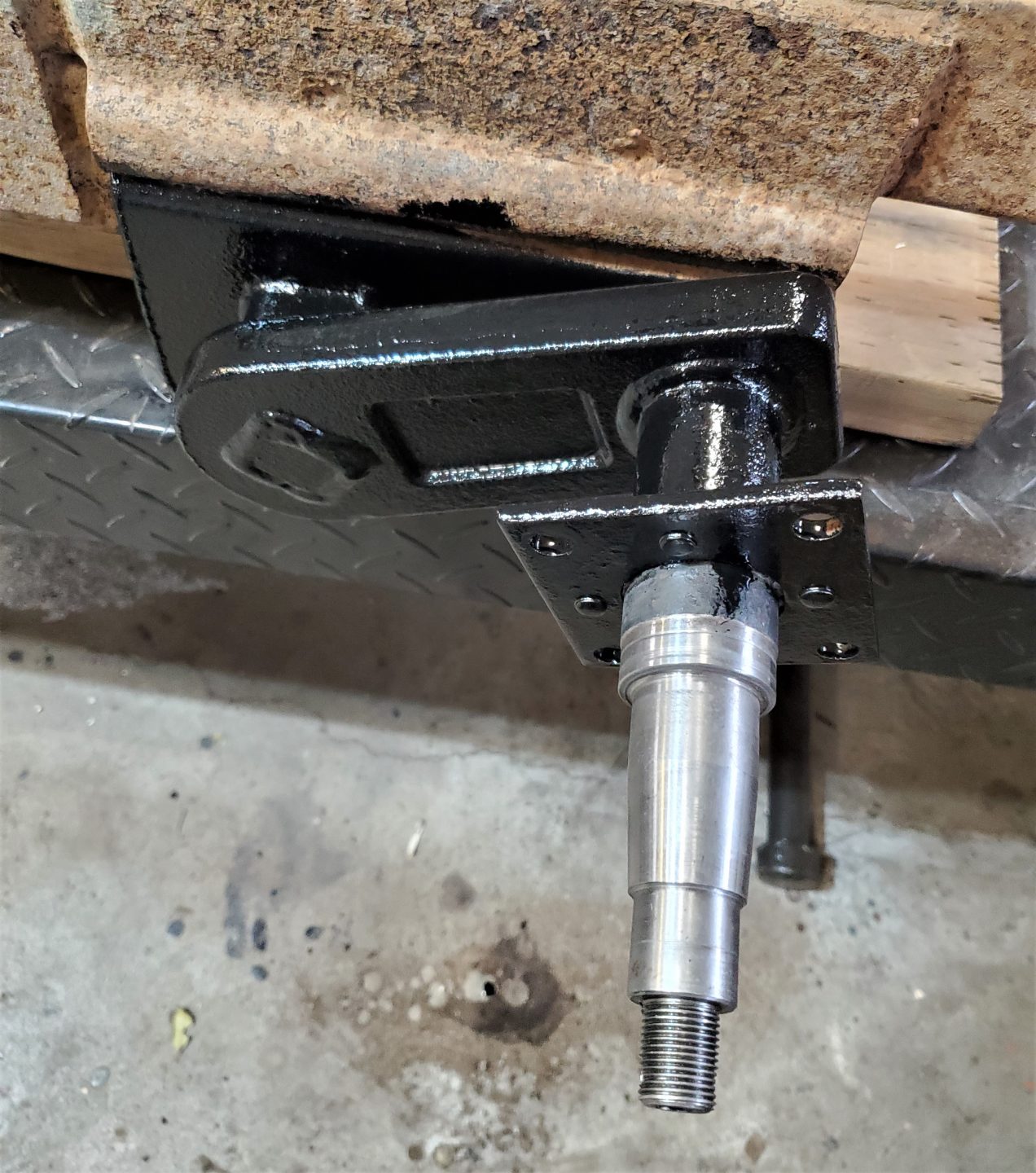 The axles.  I’m having trouble believing these axles are 46 years old.  The ten inch brakes indicate to me that this is a 3500 lb axle.  It’s pretty beefy for a light weight axle.  And it just bolts on so could be easy to change out.  Set aside the painted stuff to do some welding. 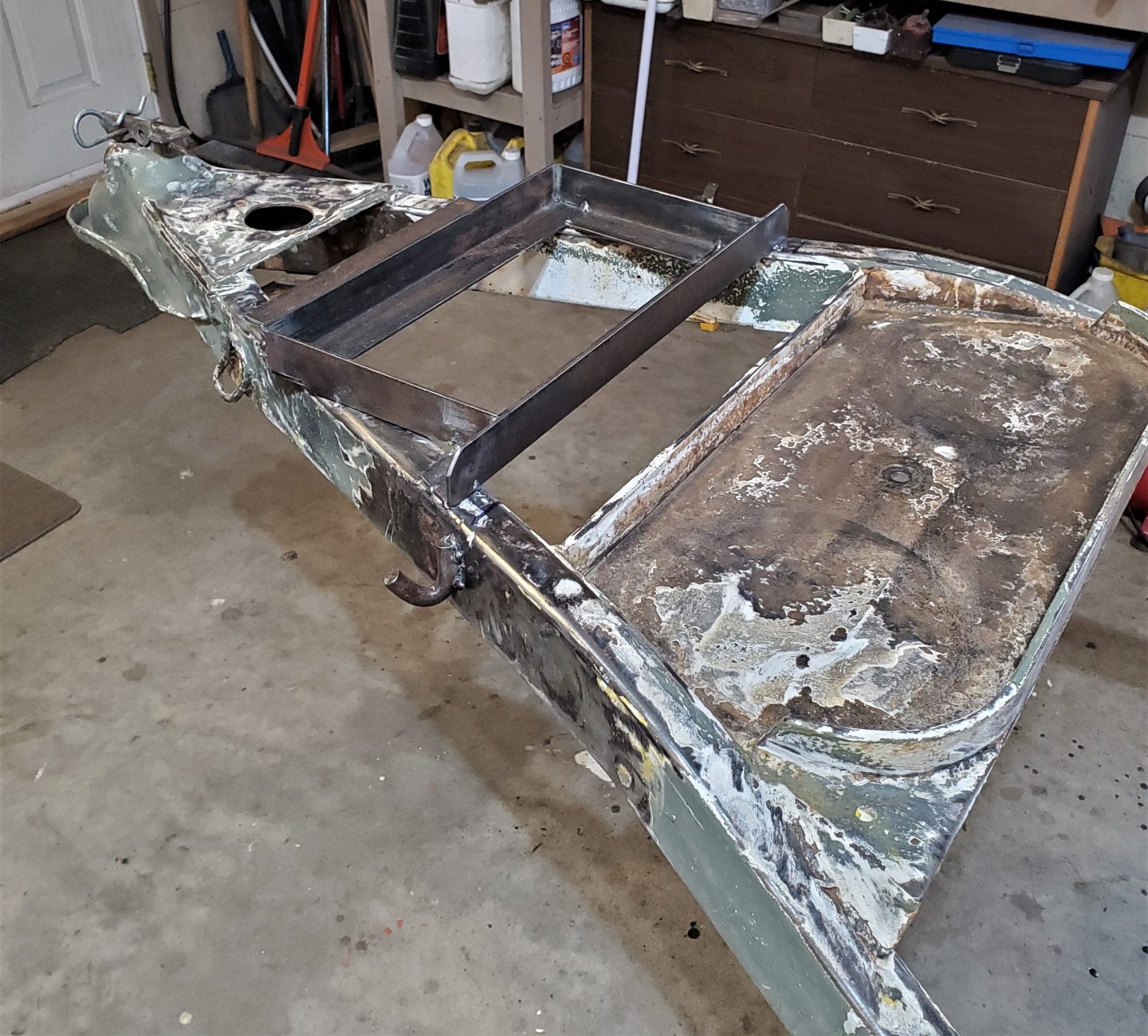 New battery tray, and a place to mount my wiring junction box.  I also moved a couple of hooks from under the frame for a handy place to hang the safety chains when not in use.  The paint is dry on the wheel parts.. so I resembled the brakes. 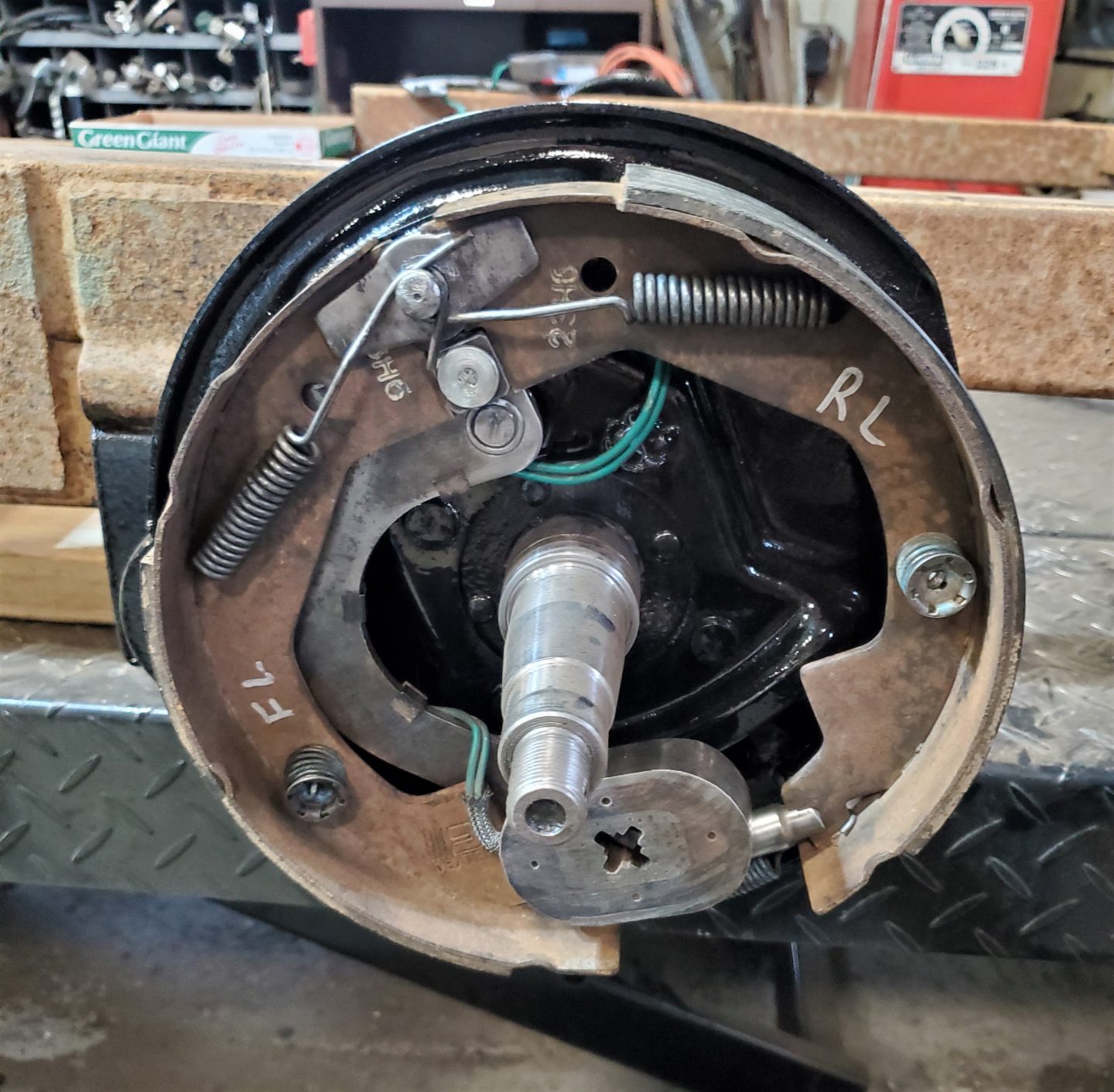 They worked ok before but now should work better..  I set them aside while I clean and paint the frame.  Easier to handle the frame without the added weight of the drums. 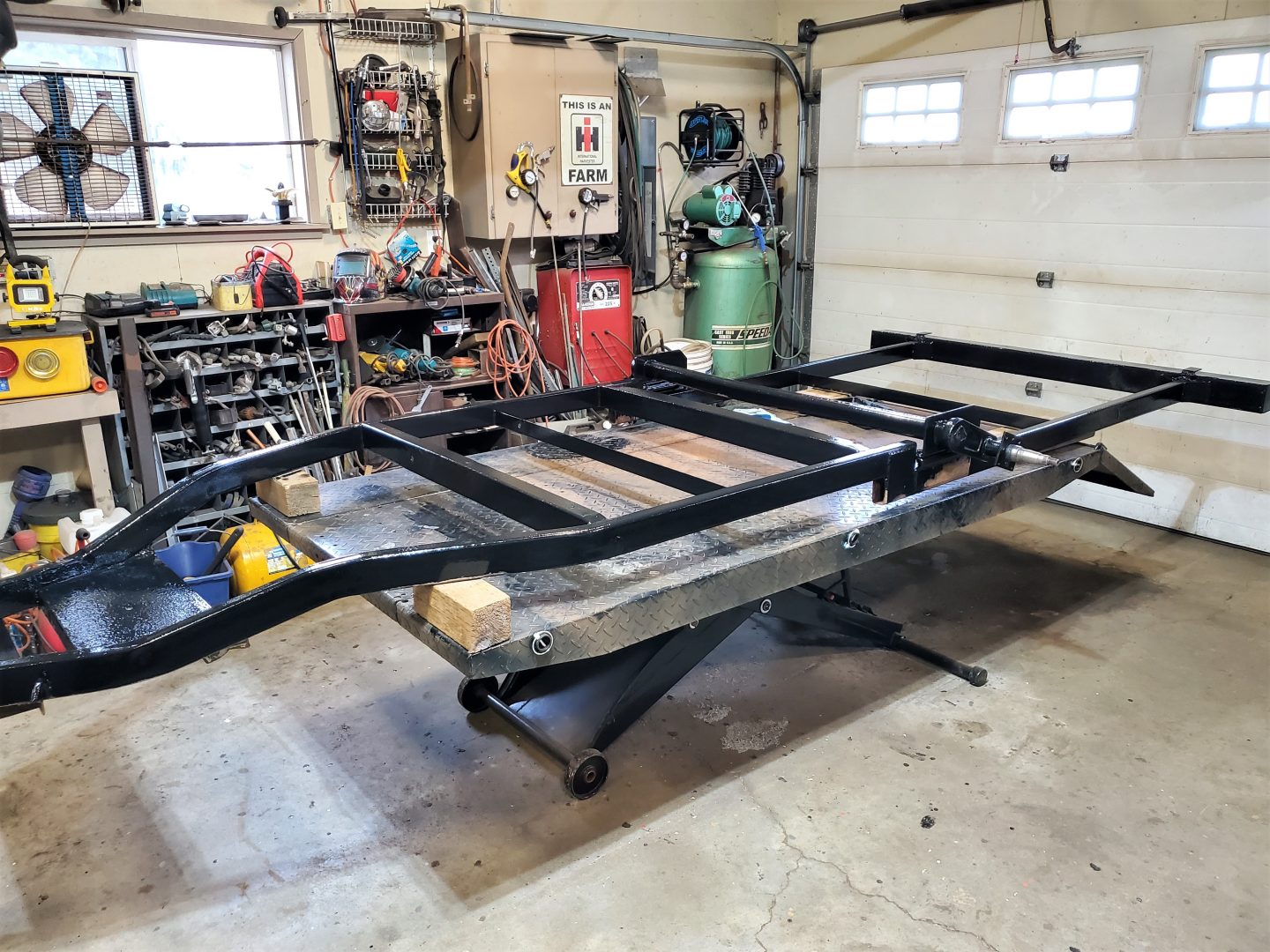 Here’s the frame flipped over..   I always paint the underside first. 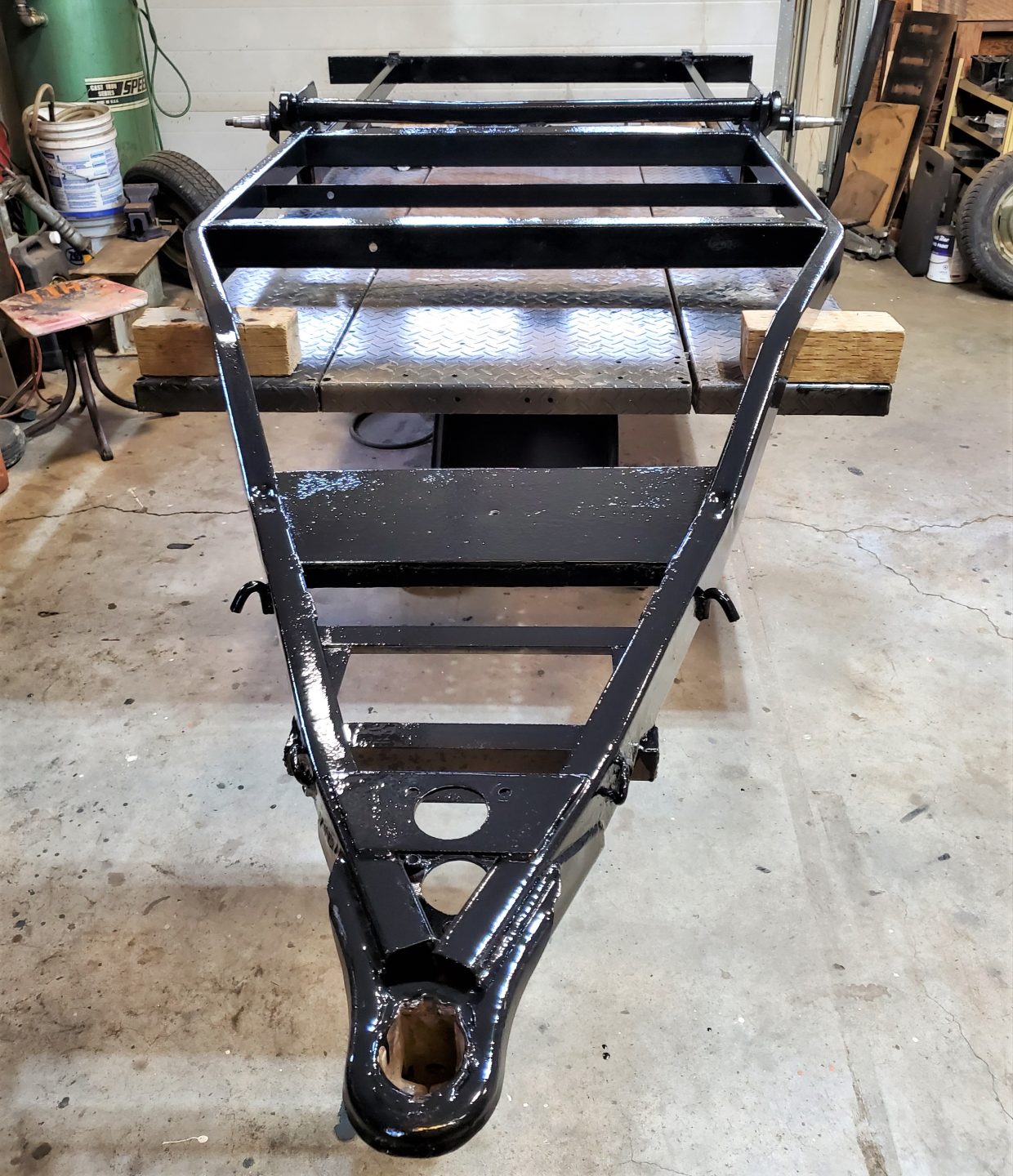 Another view.  We’ll let this cure for a few days.  Remember I removed the bad stabilizer jacks ..  I really want to have the stabilizers.  They are important for these trailers because they are so light.  If you go to the rear of the trailer inside it will tip up if not hooked up.  So I had a newer pair. 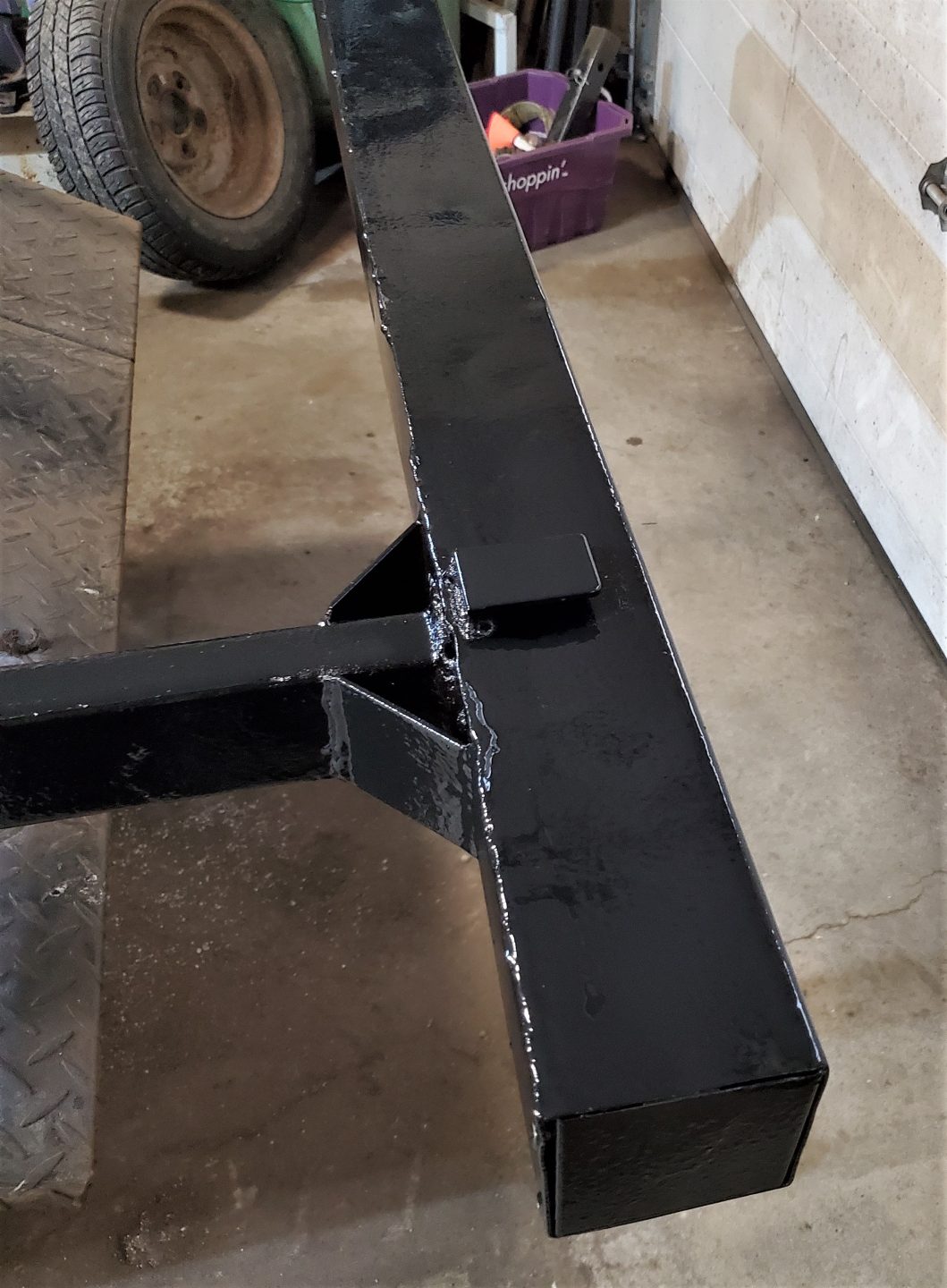 These tabs allow the jacks to be removed very easily.    I also plated the bumper ends.  Won’t need the sewer hose storage and don’t want them full of crap. 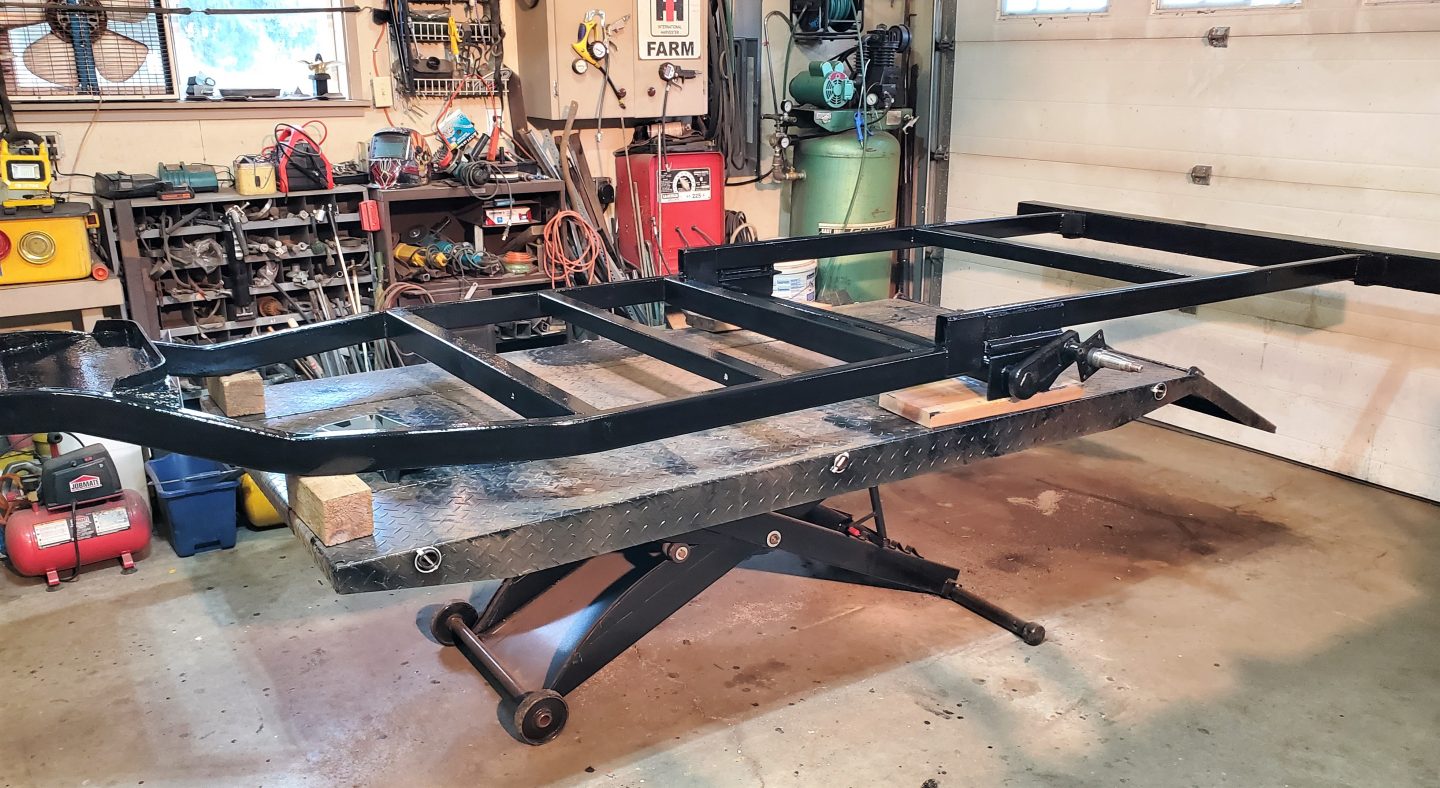 Well back over and finished the paint.  No more ugly green on this part of the trailer.  Instead it’s shiny black. 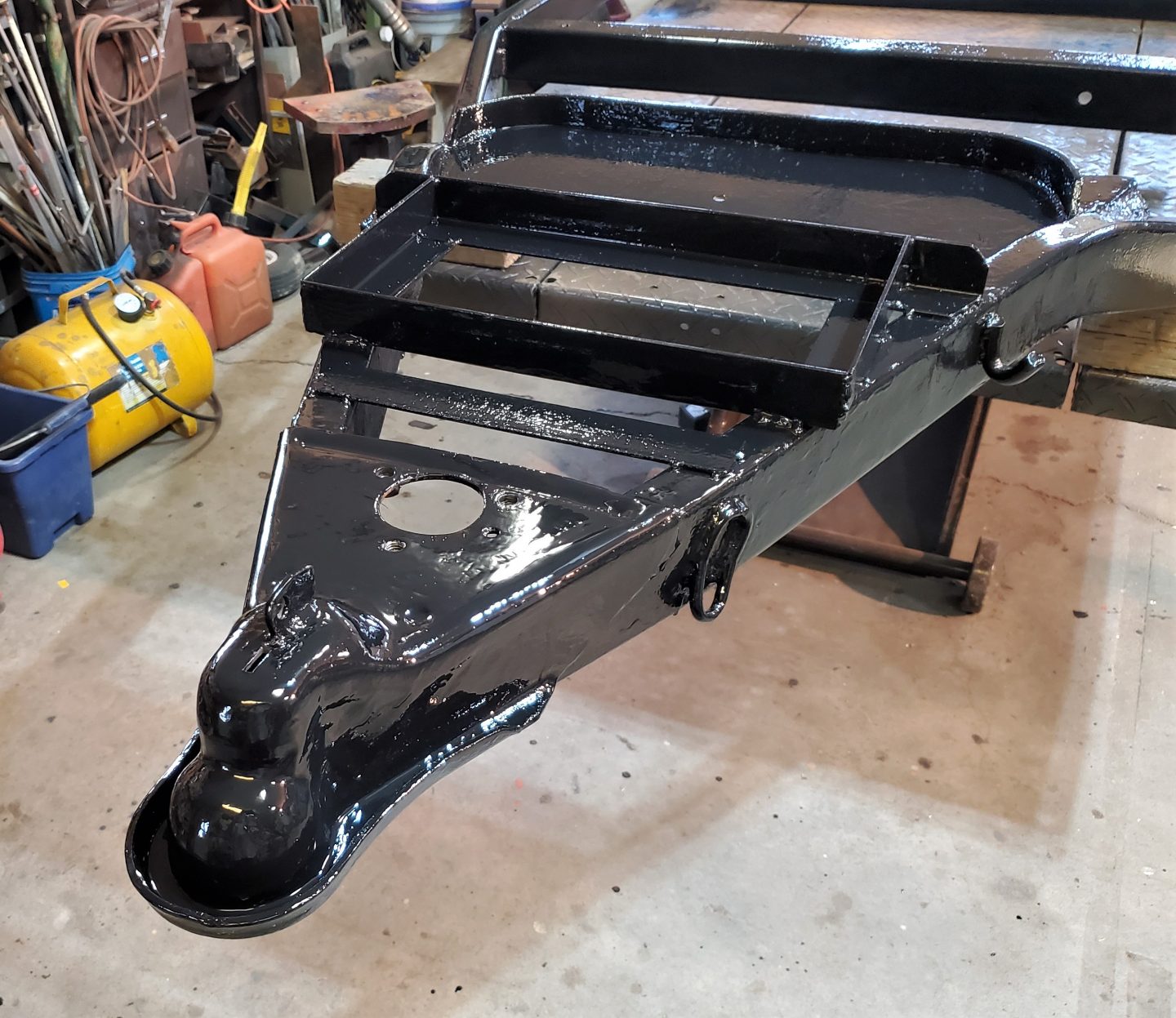 Today was finishing up the frame.  I ran the brake wires through the frame to the front.  Nice, tidy and protected.  And they terminate at the 7 pin junction box. 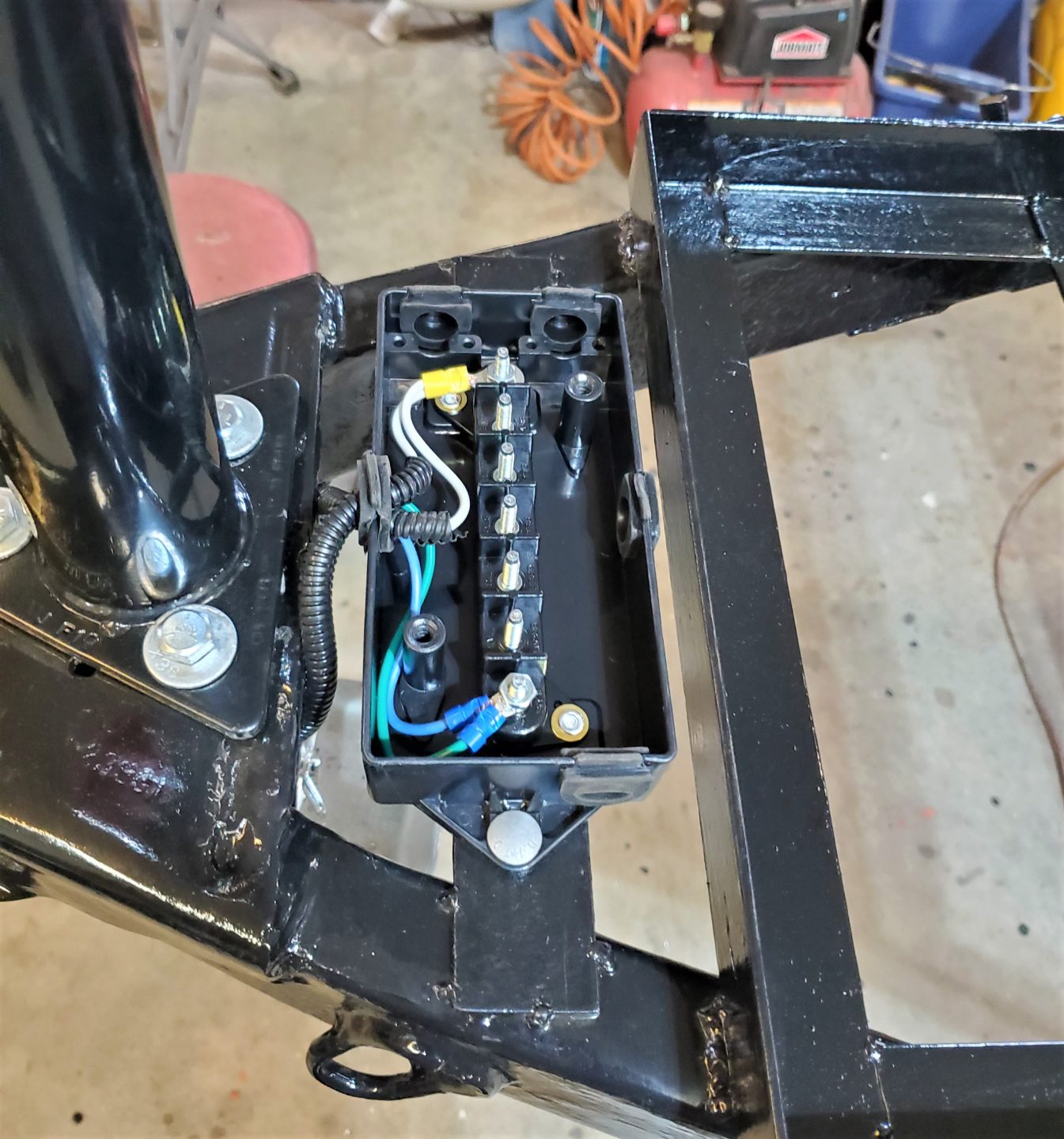 Did not have to drill holes in the frame … just came out the front of the tube.  I love these boxes..  for  $8.99 they are great, easy to connect the wiring and weather proof too.  Gets a bit crowded when all the different wires come together. 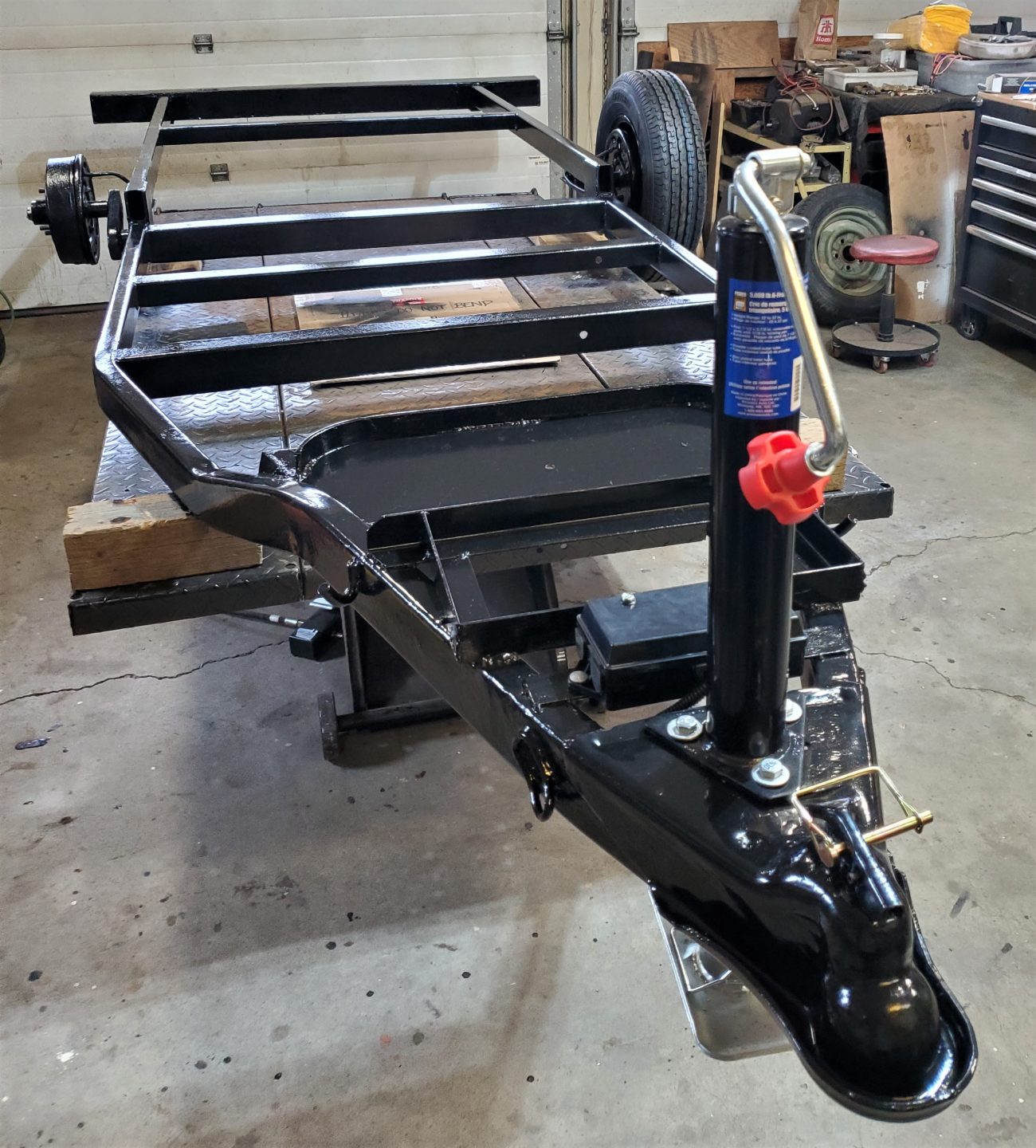 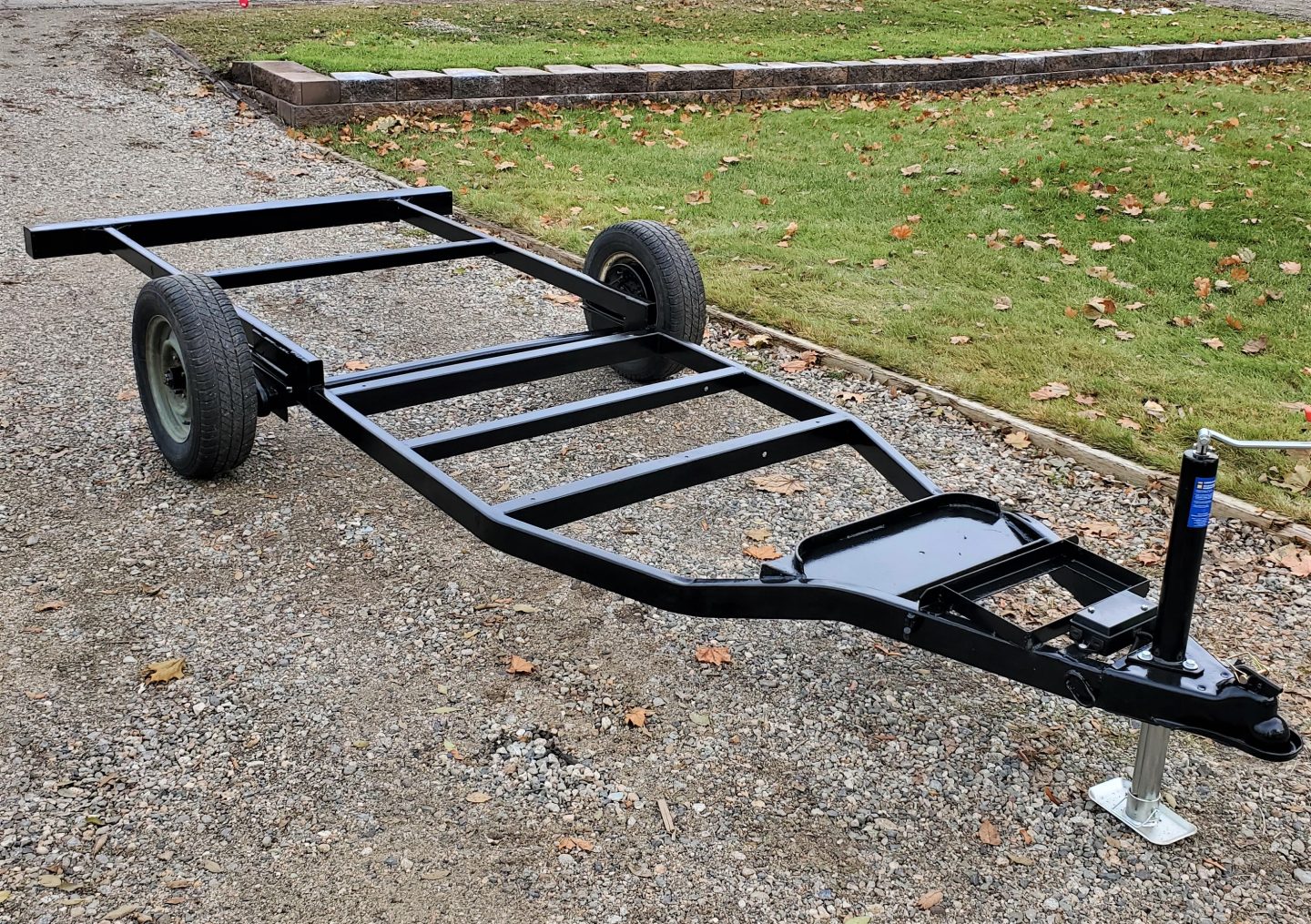 That’s it for the frame..  Brakes adjusted.. bearings greased…  time for the next page..  Total invested so far is under $400.  Mostly those fancy new wheels.