The good…the bad…and the TIPPY !

Another older Document I authored in the winter of 2007 :

“ What the bicycle is to the road…the Kayak is to the water”  A  quote ?  yeah from me .  What I was trying to say is these are ..or can be inexpensive human powered ways to enjoy the great outdoors.  “GREEN” if your into the politically correct things.  And I like that.  Since I was pre-pubescent  I was into the water thing.  lots of boats, anything that floated I thought was cool.  But in the seventies you didn’t see very many kayaks, unless they were home built.  Now they are everywhere..  And knowing me I can’t resist finding out what it’s all about.  So a little research was started…  Some surfing on the NET , a little browsing in an outfitter store in Edmonton..and I was hooked.   I focused in on the 12 ft recreational boats. They seamed the most reasonable for my needs. 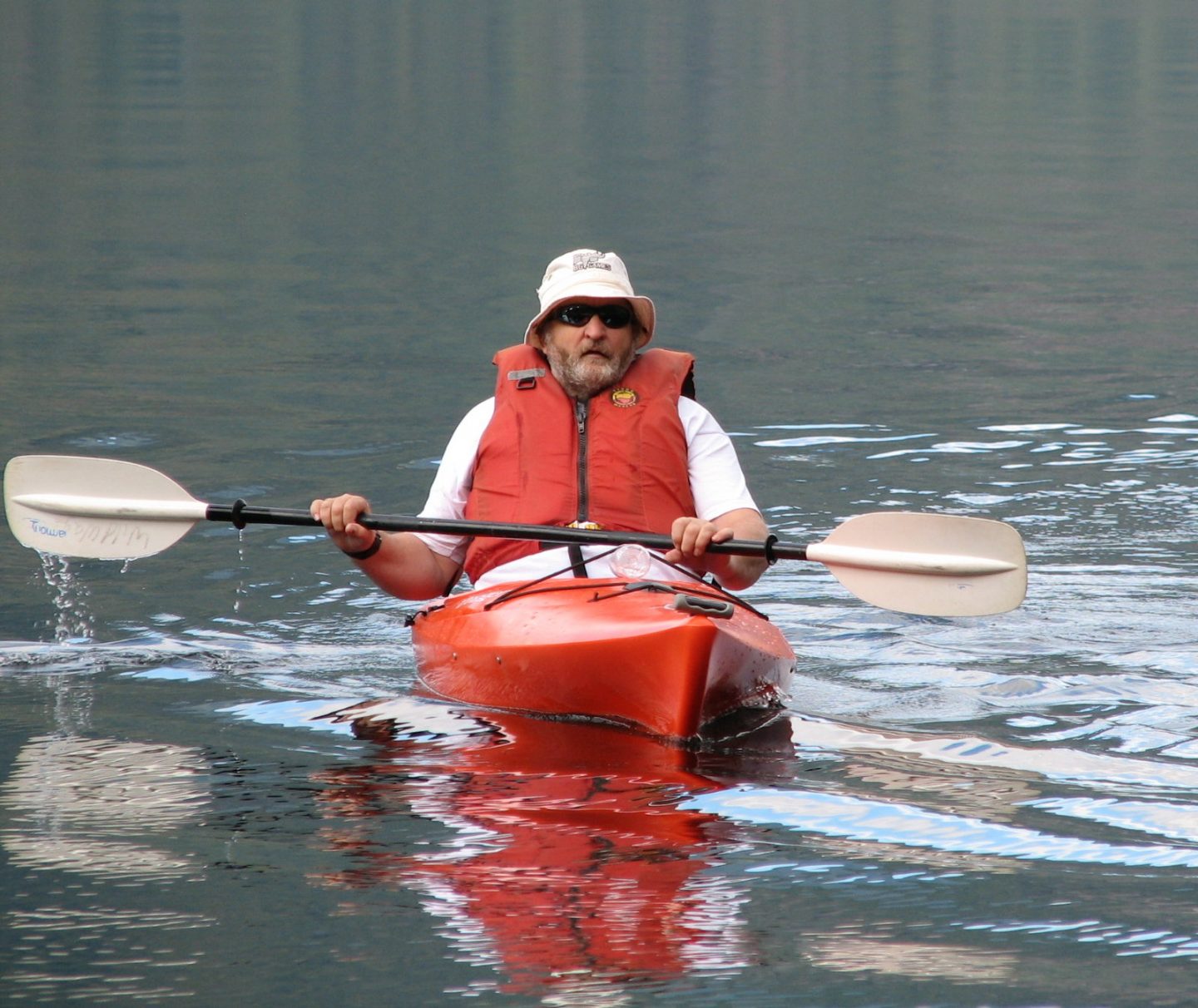 After a few visits to our local kayak shop, I wanted to try two boats , the Dagger Blackwater. Which came with very high recommendations from the shop owner ( his personal favorite)….. Pictured above…. And my favorite the Pamlico by Wilderness Systems.  Because it got the highest ratings in user reviews.  So first I rented the Blackwater on the weekend that we camped out at Christina Lake.   Well I liked the quality of the boat.  The seat had lots of adjustments on it.  In fact it was real comfy too, but the cockpit opening was on the small side.  Just 34” long, which was a squeeze to pull the other leg inside.  My other concern was the twitchiness (tippyness) of the boat. Just reaching down to adjust the foot braces sent the boat into a spasm.  However once you relax and start to move the boat is great… So my friend Dave and I spent a good four hours paddling around with one of us in hot pursuit in the row boat.  It was a fairly good first experience .  But I really needed to try a PAM .   So three days latter I’m booking off work early.  Unfortunately the only Pamlico 12 ft the shop had left was the olive green anglers boat… the same boat just ugly.So off to the lake …now this boat was less money than the Dagger..and mostly because there is no drop-down skeg to help in the tracking.  And the outfitting (seat & stuff) was not as fancy.  But it was every bit as comfy too me.  And the quality was just as good too.  The real big difference was two fold…first the cockpit was a whole ten inches longer…that made getting in and out easier.  Second this boat was more stable .. you could move around without any concern for getting wet.  I spent a good hour on the lake, and made sure I hit some waves. Both head on and sideways.  No problem.  It might have taken a little more effort to keep the boat tracking straight, but it turned better .   And I can live with that.  So back to the shop only to find out that he had none of the PAM’s left. But I could order one for next year…any color! So  we talked about paddles & PFD’s  and I tried on a few. Boy way better than my Coleman life jacket.  And found out just how important the length of paddle is.  A 230 cm is good for big guys like me.

Half the money down..and wait till spring for the boat…you bet.  The shop did good on a package deal …boat, paddle & PFD.  So I ordered a BLUE boat.Ok that ‘s a good story …but wait there’s more.  While I was checking out E-Bay .I found a Dagger kayak for sale inAbbottsford,BC.   Pick up Only..the auction said.. no kidding it’s pretty hard to ship a kayak.  Hmm . This was a 15 ft Edisto  model that has been discontinued from the Dagger line.  It came with a rudder, paddle and neoprene skirt.  After a few E-Mails back & forth, I decided to win the bidding on this boat.. And I did just that.  Still paid way less that a new boat . And the guys roommate was bringing it toKelowna…how cool.   No  regrets here. 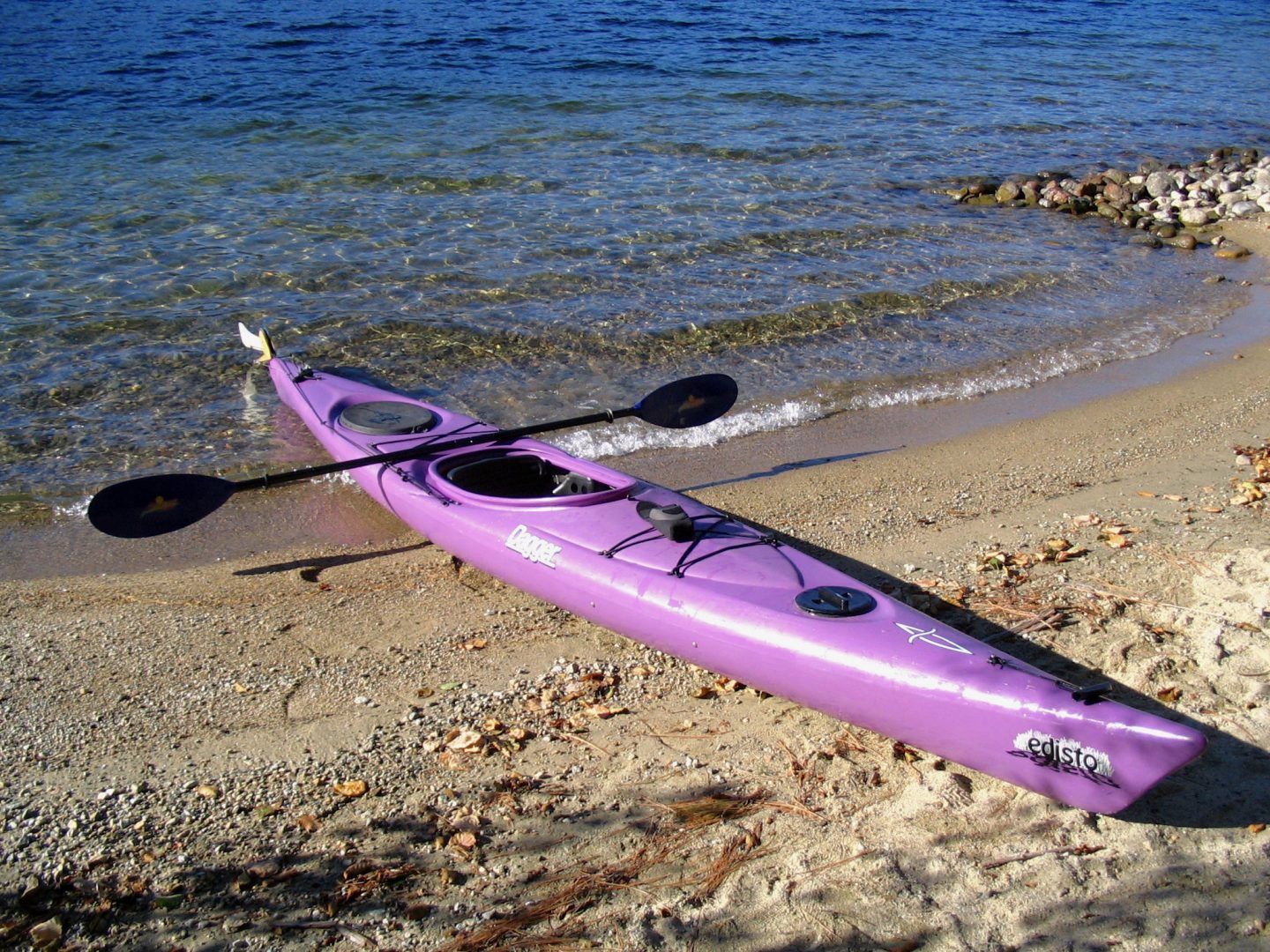 Yes it’s purple ! but that’s just a color..and it’s different .  Here it is the thanksgiving weekend and the lake is still very pleasantly warm. So off I go for a paddle … I was concerned for the small size of the cock pit, but I found it wasn’t too bad getting in and out.  This boat is very stable and with the rudder deployed it tracks were you want it . Rudders are cool!  If it’s wanting anything it’s a taller seat-back. After sitting in the other boats you really get to like the back support.  If I can fix that I will.  The paddle that he gave me with the boat is very much like the one I bought.. just purple.   There’s a cool little hatch in the bow for keeping small stuff dry.  And a large rear hatch too.   So with the new rack on my truck I’m good to go..  I’ve put in a few days of using the purple Dagger now, and it’s a great boat.  But its getting cool now so I have to put the toys away for the winter. Look forward to next season ….

The rack for Kayak’s on my Avy.. 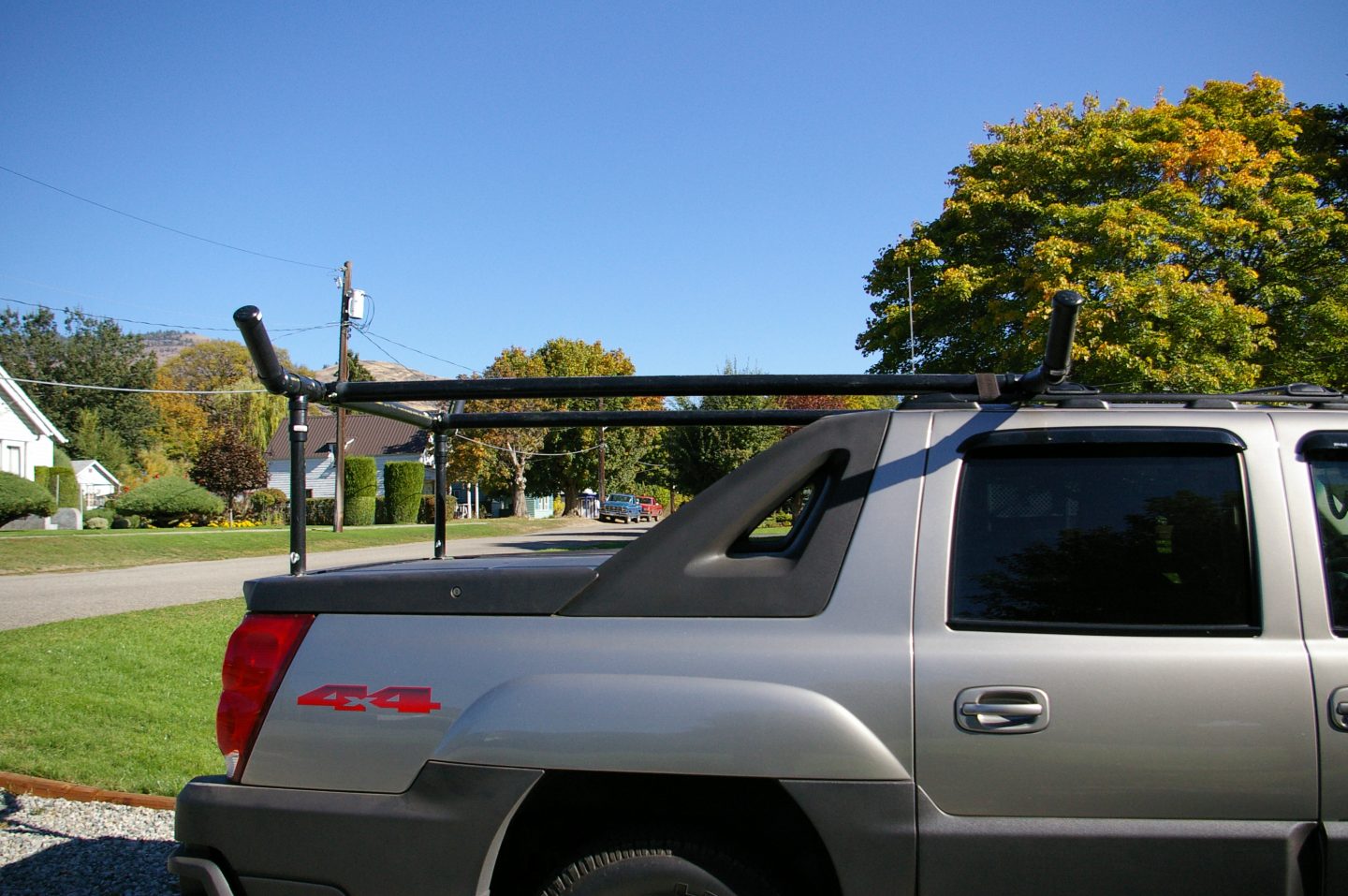 Any one who’s come to the family camping in the summer has seen this on my truck..  It holds 3 boats and cost me $40 to build.  I’m still using it five years later…

Well surprise  the kayak I ordered was delivered to the shop early.  And Wildways wanted me to pick it up so he’d have room for more that were coming.  So here it sits in my basement ..cause I didn’t make plans for it outside yet.   Oh well as soon as it warms up a little I make a place for it outside..  I’m sure glad I chose the blue color ,  it’s a very nice break from the yellow ones that were in the store.  It came with a little bonus of knee pads on the cockpit rim.  A cup holder and great seat.  Looking forward to using it this spring.   These are very user-friendly boats with a long cockpit opening.   I found another PDF on E-bay for thirty bucks . way less than the $120 in the store.   So we are set up good for the season. 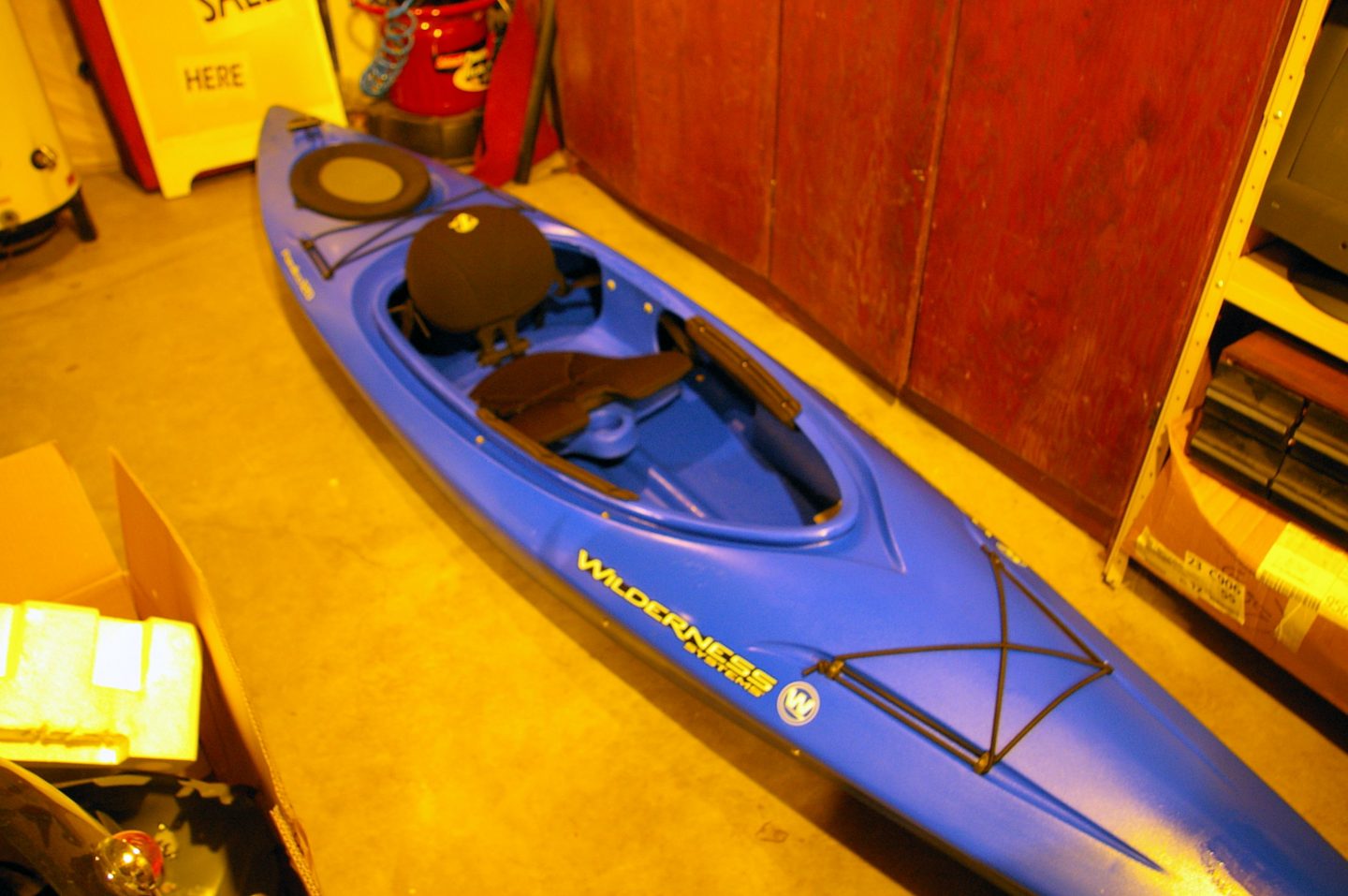 Well we took our two kayaks with us on our yearly May camping.  The first stop was Okanagan Lake.  It was windy both days we were there so I only used the “Pam” for a little jaunt on the lake.  What a great boat.   Our next stop was our favorite Herald Park on Shuswap lake.  It was there that the boats got a workout.  I even got Maureen into the “pam” for some first time paddling.  She really did enjoy it, but found it hard to  keep the kayak going in a straight line.  One of my future projects will be to install a drop down skeg on the back end of the Pamilco. 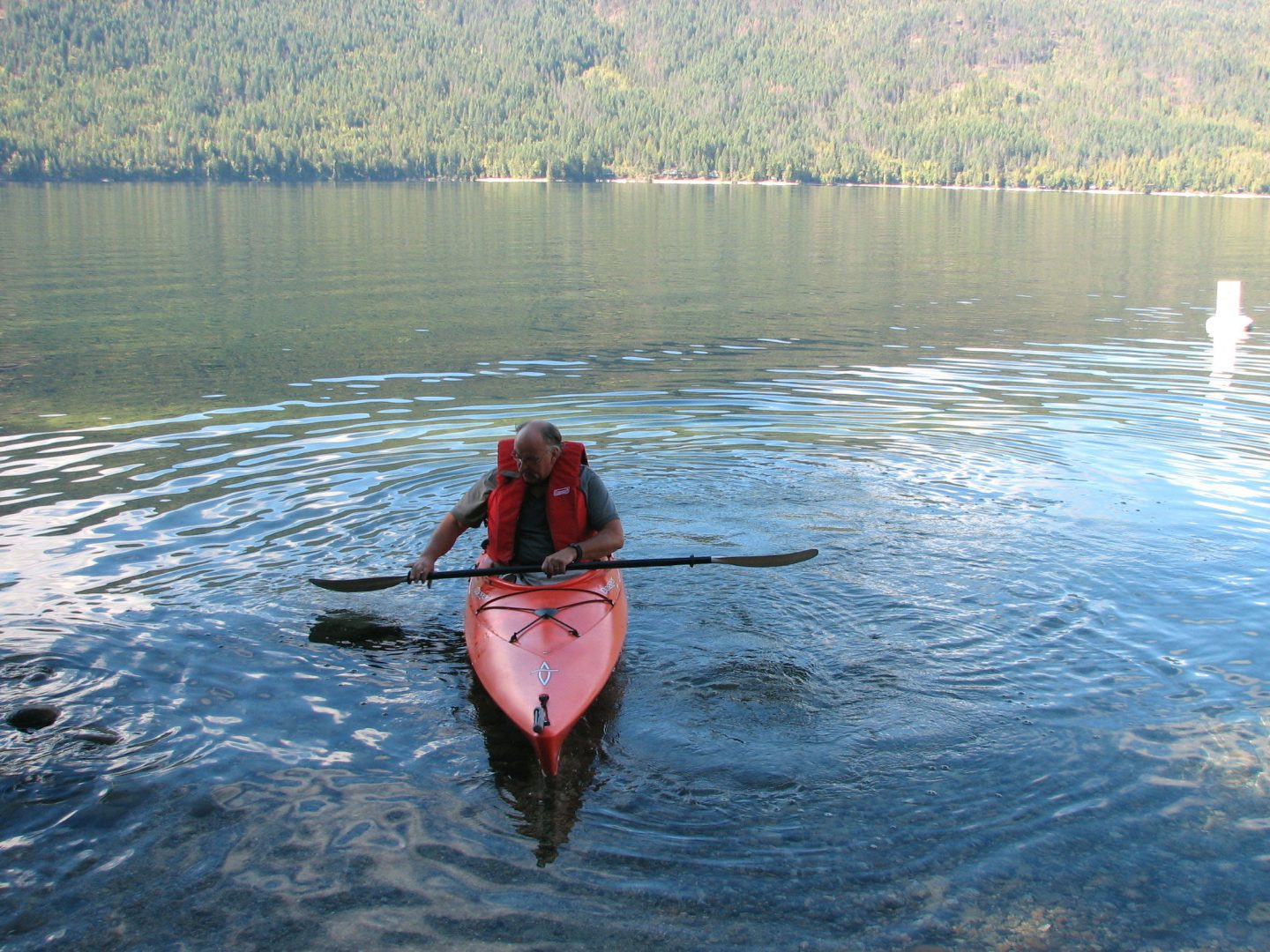 The boats came with us again when we went to our annual family campout at Kettle River park.  I transported them 10 km up the river to Westbridge, and paddled the river back to camp.  This was so much fun..  we did it several times.  I will be doing that every year for sure.  Next year I’ll be sure to get some photos of the river runs..   And this coming spring I have some paddle holders to install on both boats.

A few changes to the Kayak ‘s I have..  in 2009 I bought another Pamlico 12 because I loved the blue one so much.. This time it’s red, and it is the fishing model so it has a rod holder and paddle clips on the side.  Also that year I sold the purple Dagger for what I paid for it.  So I’m down to two boats.. Perfect.  These are the boats I enjoy the most.. and when my Brother comes to the camping he brings two as well, so we’ve enough for a good group paddle. 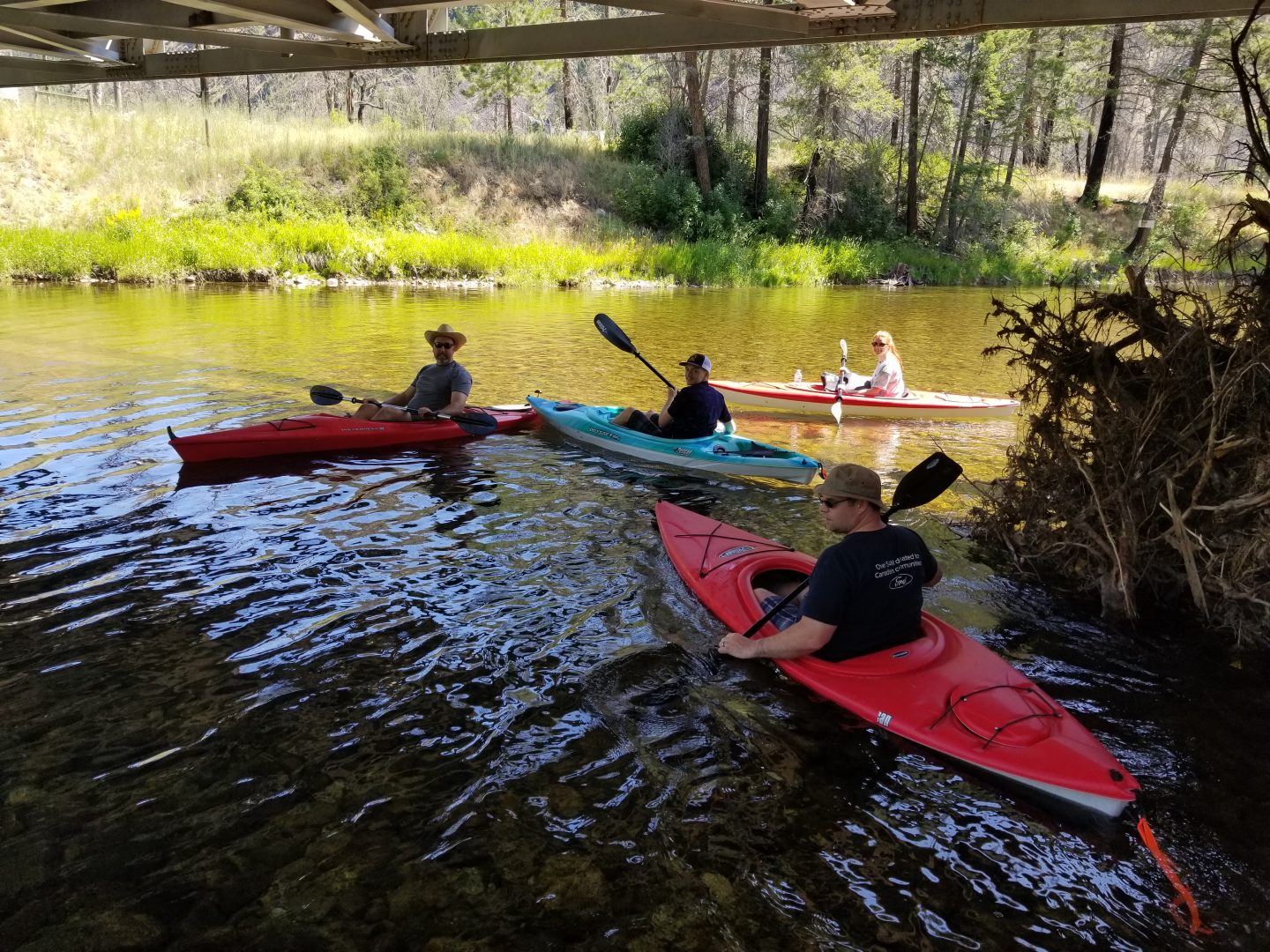 The paddle down the Kettle river during our summer camping is a high lite for me. It’s about a two hour run and easy enough for beginners.   And we have introduced a few new people to this for sure… Maybe more will bring boats ..it’s a great way to see the river..