I say almost.. because there is always something that needs money thrown at it.   The “free”  fifth wheel I got a few years back needed the whole roof replaced..   BUT  when you start off at zero dollars , it’s easy to spend a bit to make it right again. 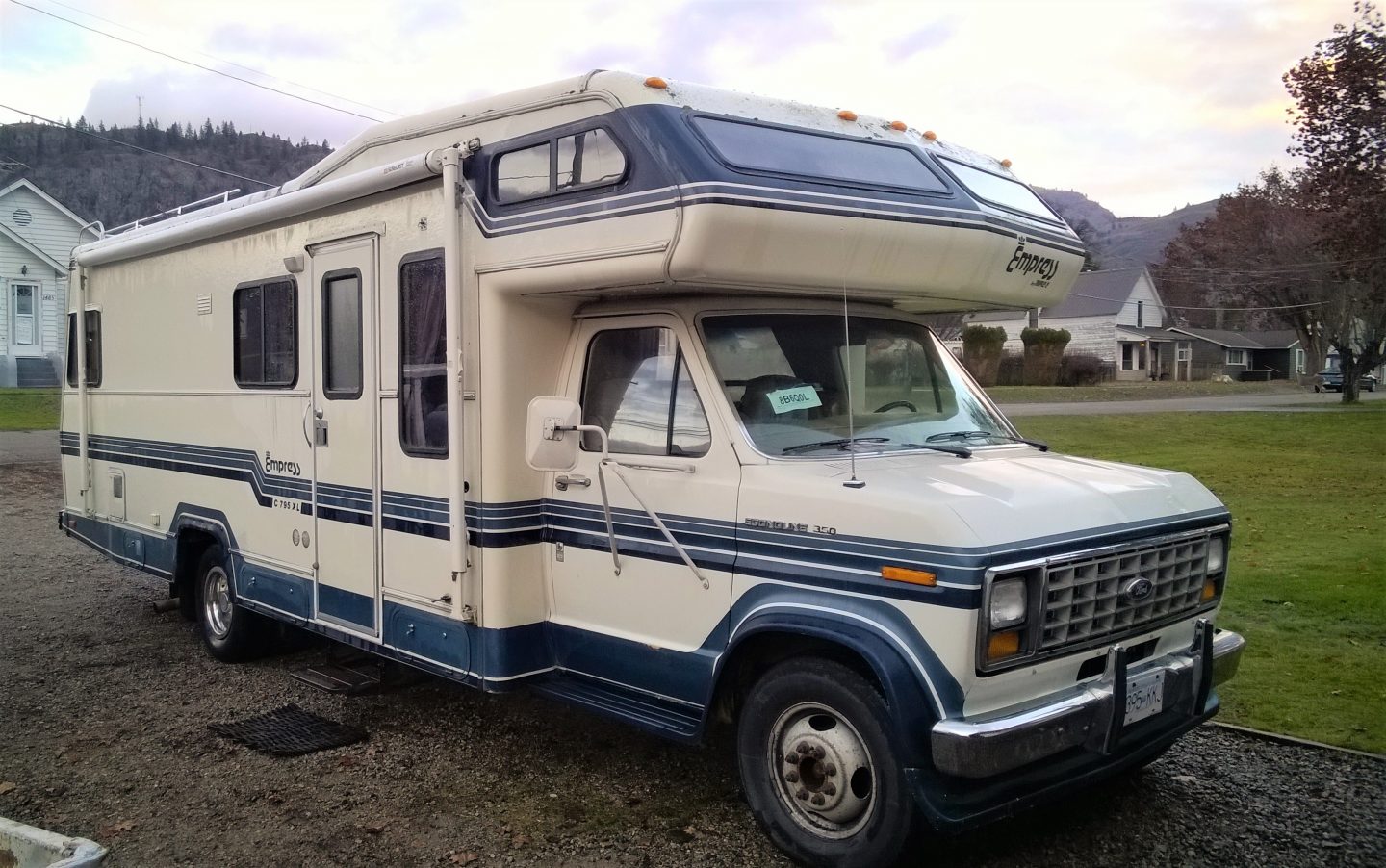 Also I’m working for this one..  I have been and will be putting in hours of work to clean up and help dispose of  “stuff”  for a good customer of mine who is charged with the task of helping her friends who have got to a care home.  That’s the trade for this lovely unit.  Plus they need it gone in order to sell the property. 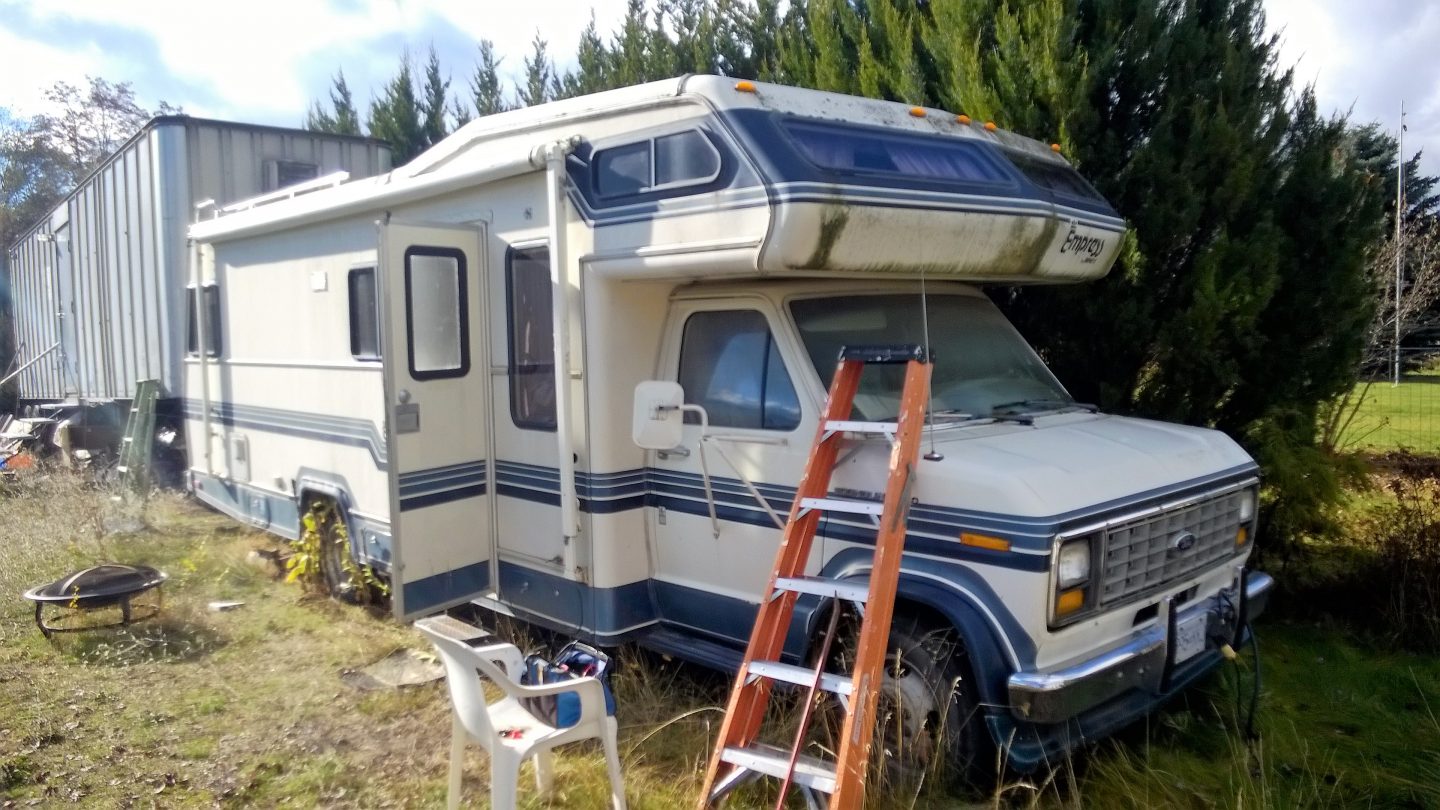 This is what we found..   This is a 1987 Tripple E  class C  motorhome.  27 ft Canadian built.  very good quality.   It has been parked there in the yard for 4 years now.  I was told that he started it a year ago.. no proof of that..   When we pulled the cover off the air cleaner I found old rotten sunflower seeds stashed in there..   So Dave & I  jumped it and poured  some gas down the carb.. with a bit of coaxing it started.  So it runs !   there is just 100,000 kms on it so it should be good.  All the batteries are dead.  I have replaced the motor battery, and in the spring I’ll replace the camper battery. 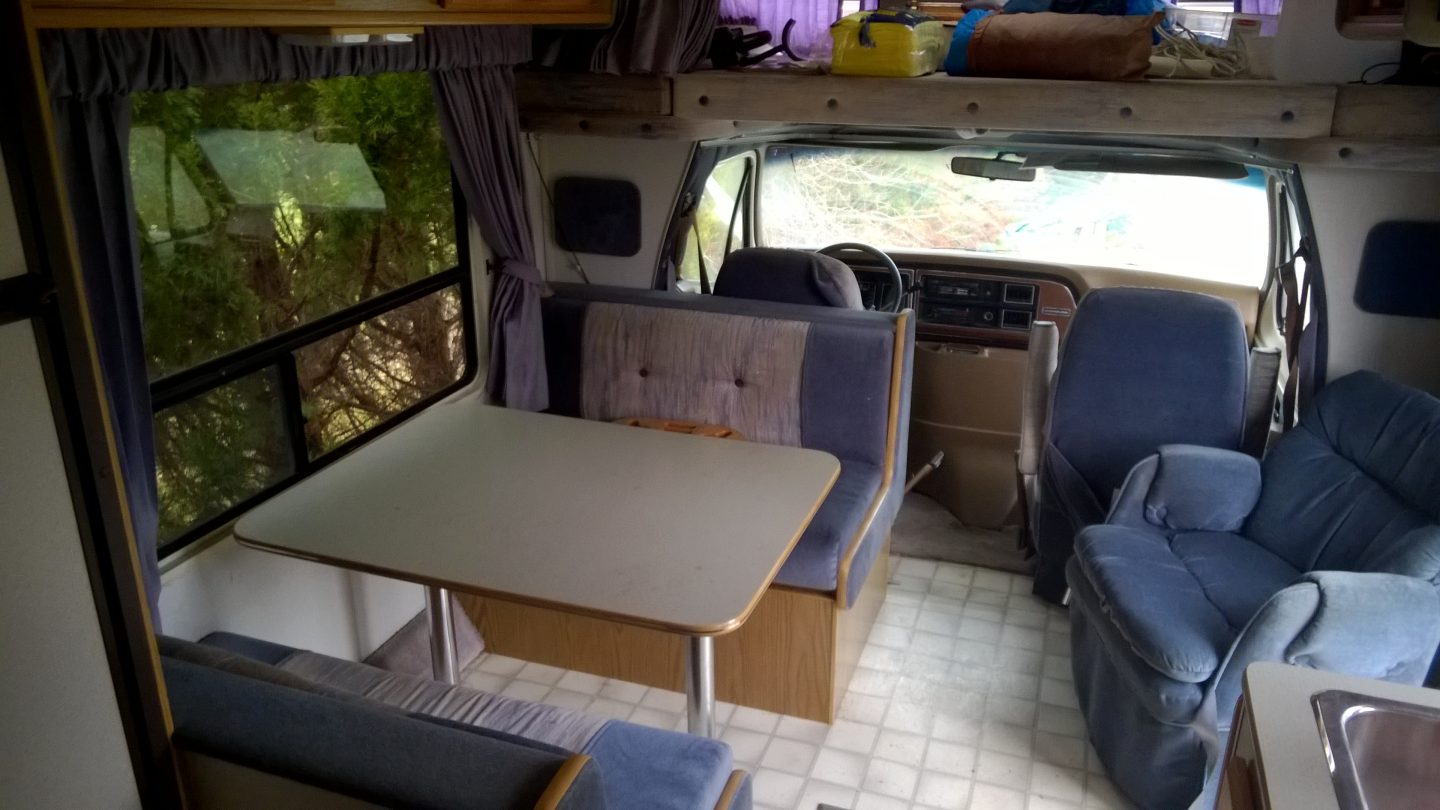 It’s Blue !   a very typical color scheme for that time..   Needs a good cleaning both inside and out.  But it’s overall condition is good..  There are a few repairs to do inside..   just the oak cabinet doors coming apart..  no big deal easy to fix.

The floor plan is interesting.. 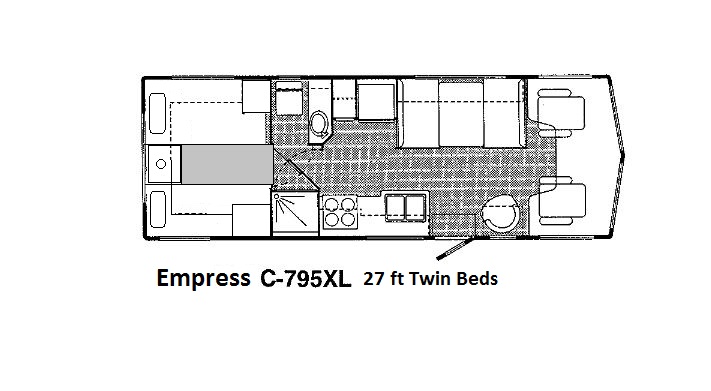 This unit has the twin beds in the back.   And the usual large bed at the front..  plus the dinette makes in to one..  That’s ample sleeping..  The rest is typical and very functional.  This unit also has the shower on the other side of the hallway.  Both bathroom and shower doors open and turn the hallway into a big bathroom.  cool idea !

Well we think we’ll keep it for now..  even though we have a good RV.  This one would be better for short weekend getaways..  Plus we can loan it out for family camping.   For now I’m going to empty out some stuff, test all the systems…then tarp it for the winter..

The first thing to do was take the deep cell batteries out..  I found the recite for them..  2006.  So they are ten years old..   They are not as dead as I thought..  still had 6 volts in them..  and the water was mostly gone..  so we have topped them up and they are taking a charge now.  I powered the MH up with the 30 amp power plug..  So far all the lights work, the fridge is working too ( that’s a big one). The AC unit fan won’t turn..  wants to . but something is blocking it..  So it’s up to the roof to see what’s up..  and sure nuff…  the wasps and the stink bugs had built a city.   All clean now and the AC works fine.  Tested all the gas appliances today.  everything works as it should.. Value is climbing.. 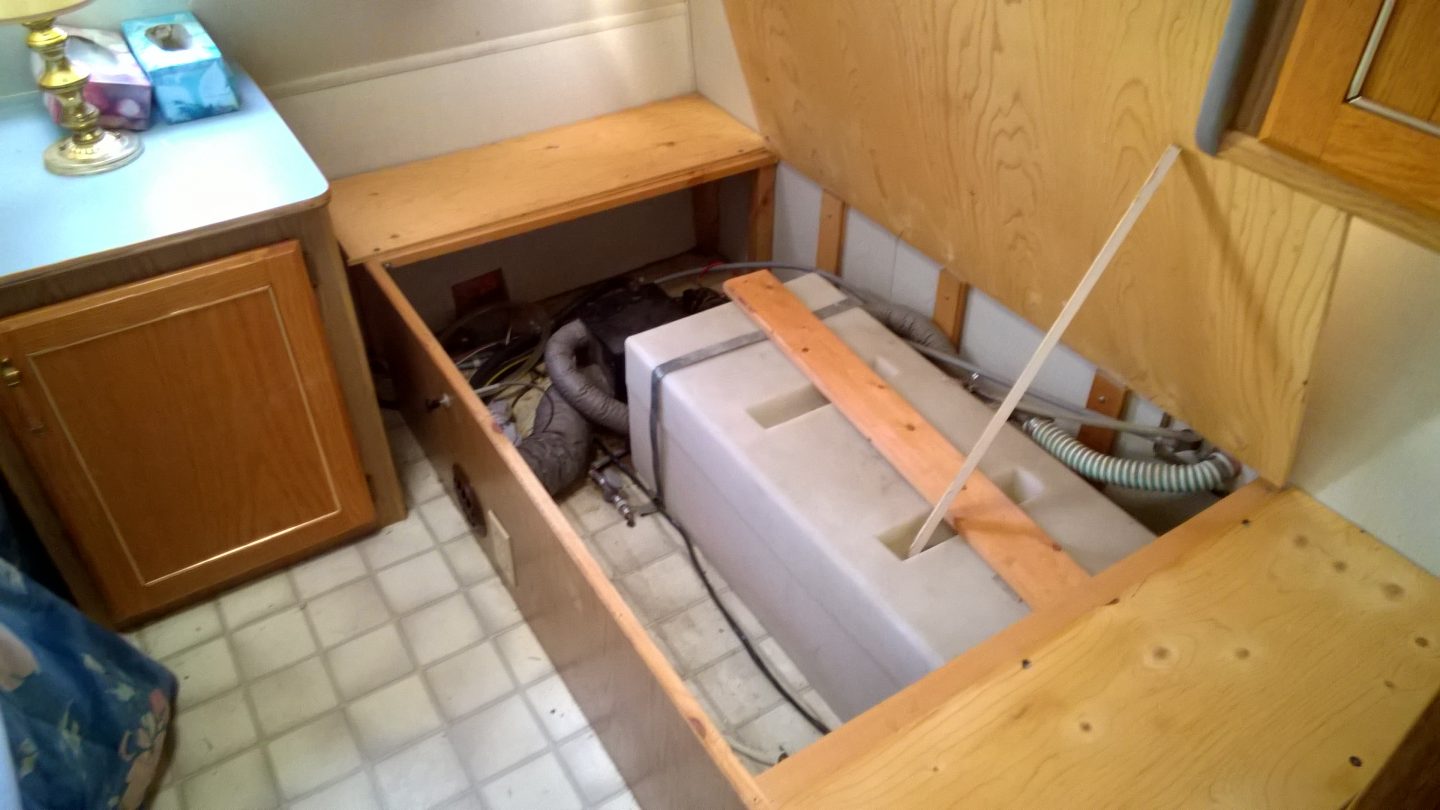 Under the left rear bed is home to the water tank..  and the bus heater.  works just like the dash heater ..  hot coolant provides heat while you are driving ..  great for those “off” season trips.  The water pump is also here..  Very convenient and easy to get to.  However very messy , quite the tangle of wires and water lines.  I don’t like the way they did the drain for the  water tank, but it may have to be there.  One great thing about this vintage of RV is that the plumbing is all above the floor..  most of it you can see. 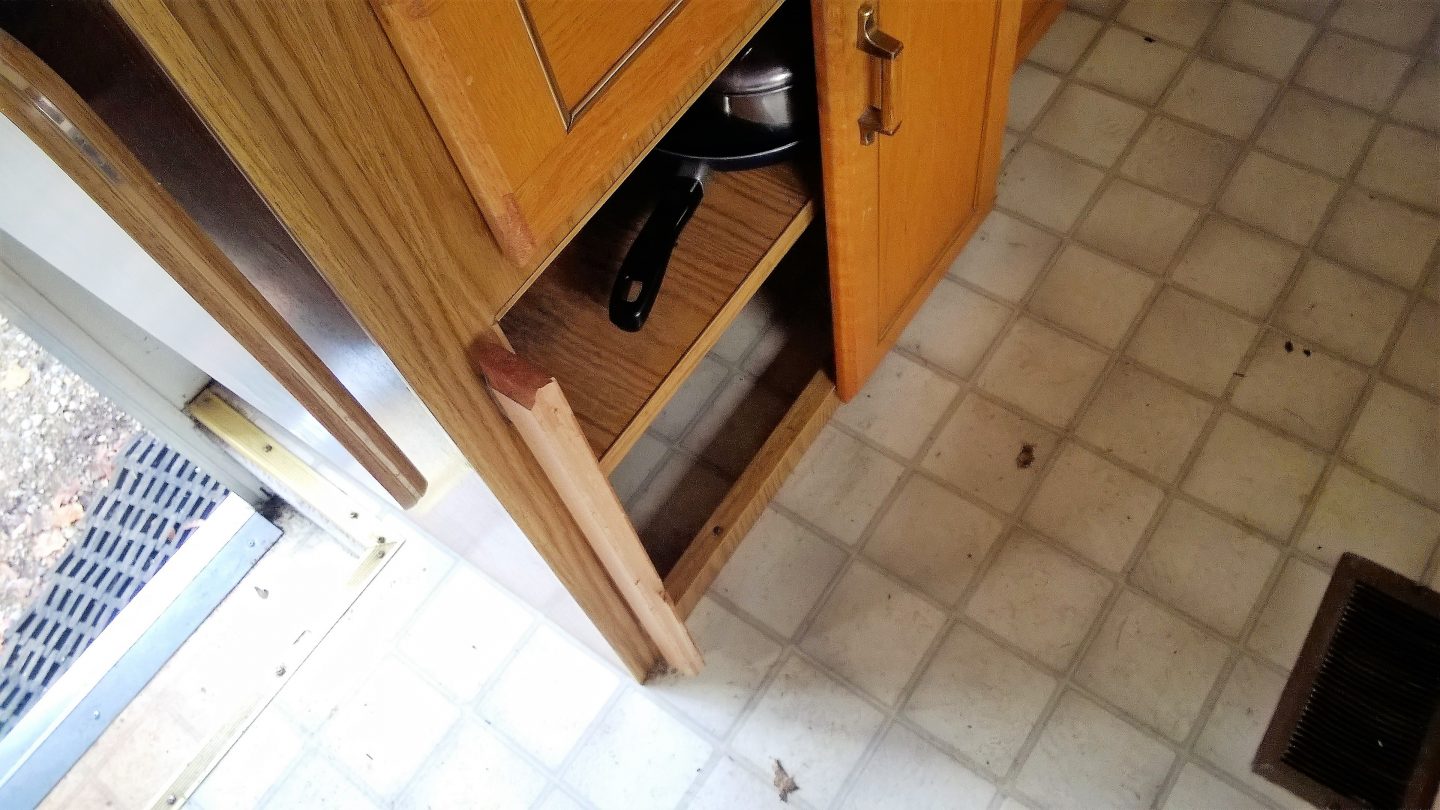 Here’s one of three cupboard doors that need to be glued back together.   This is not surprising after thirty years.   The list of repairs needed is small..  I’ve ordered the bits needed for the repairs..  new vent covers, a new porch light..  It’s not much.

Now there are some things that are “optional”  repairs.  Like the bathroom sink.. 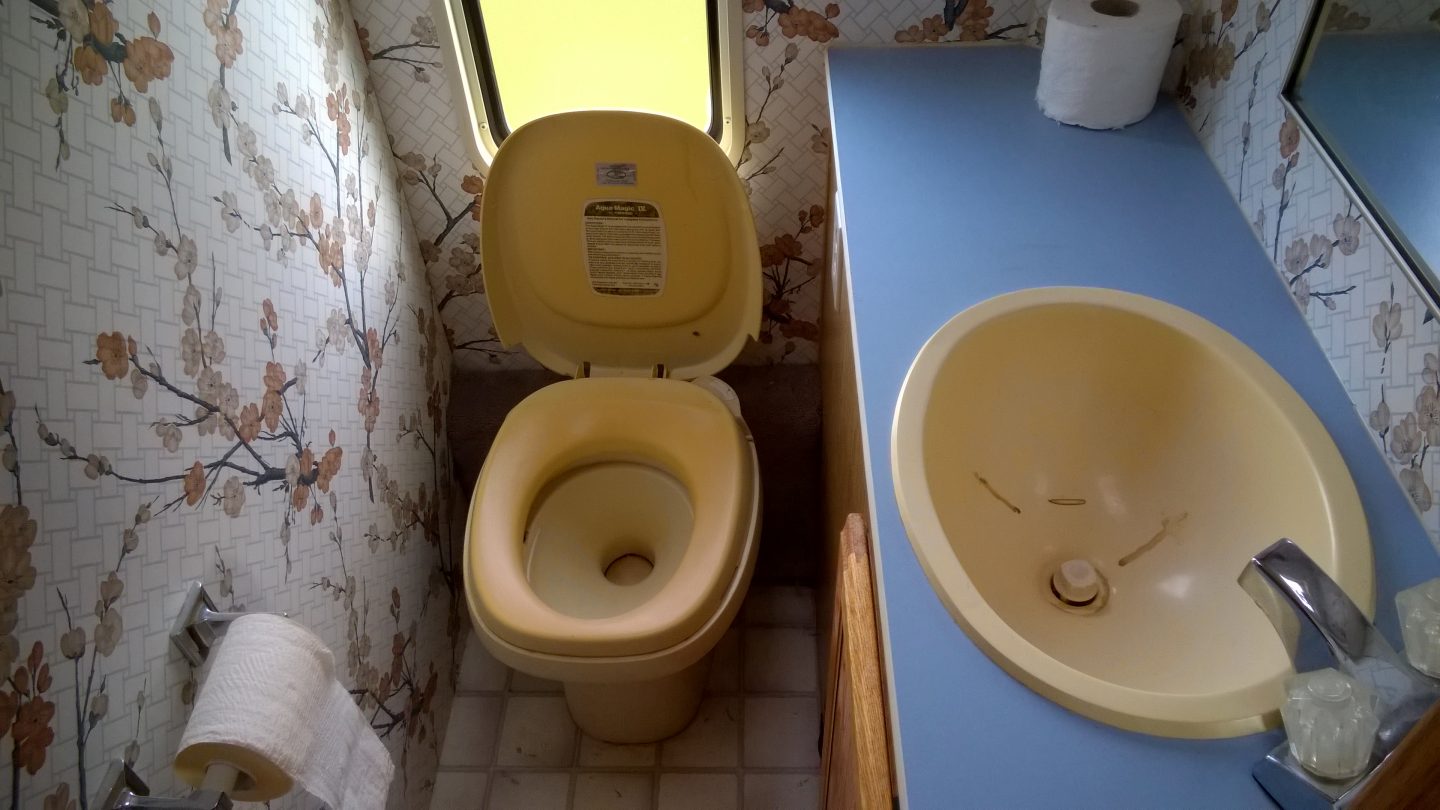 And the blue counter !   SAY WHAT..  who thought this looked good ?   I’ve got a little stainless steel bar sink that would be better in here..  and while I’m at it I’ll replace the counter with something neutral.   As well some of the curtains are faded and looking a bit ratty..  An LED light or two would be nice..

Since I was into all the cupboards and compartments I decided to run antifreeze through the plumbing.  Just to make sure.   I was dismayed when water came out first !  Not good..  and sure nuff there was a leak under the bathroom sink.  The faucet .  These are cheap plastic faucets..  Now for sure I’m installing a new sink ..and faucet.  At lease I’m assured there is antifreeze in the lines now.

As for those batteries.. well they aren’t doing well..  even though they took a charge they are not coming back to full power..  so I’ll recycle them and in the spring I’ll buy a new battery. 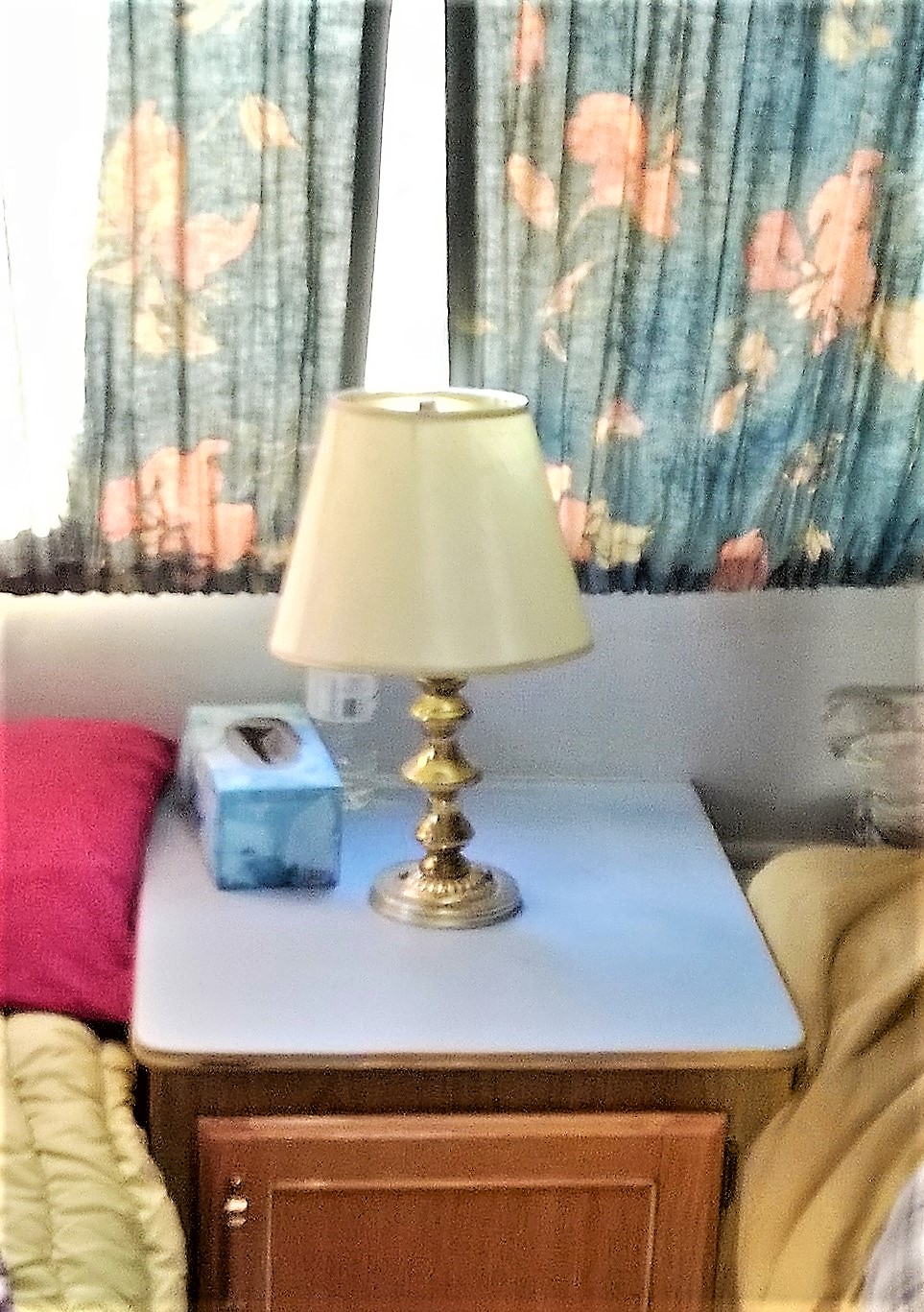 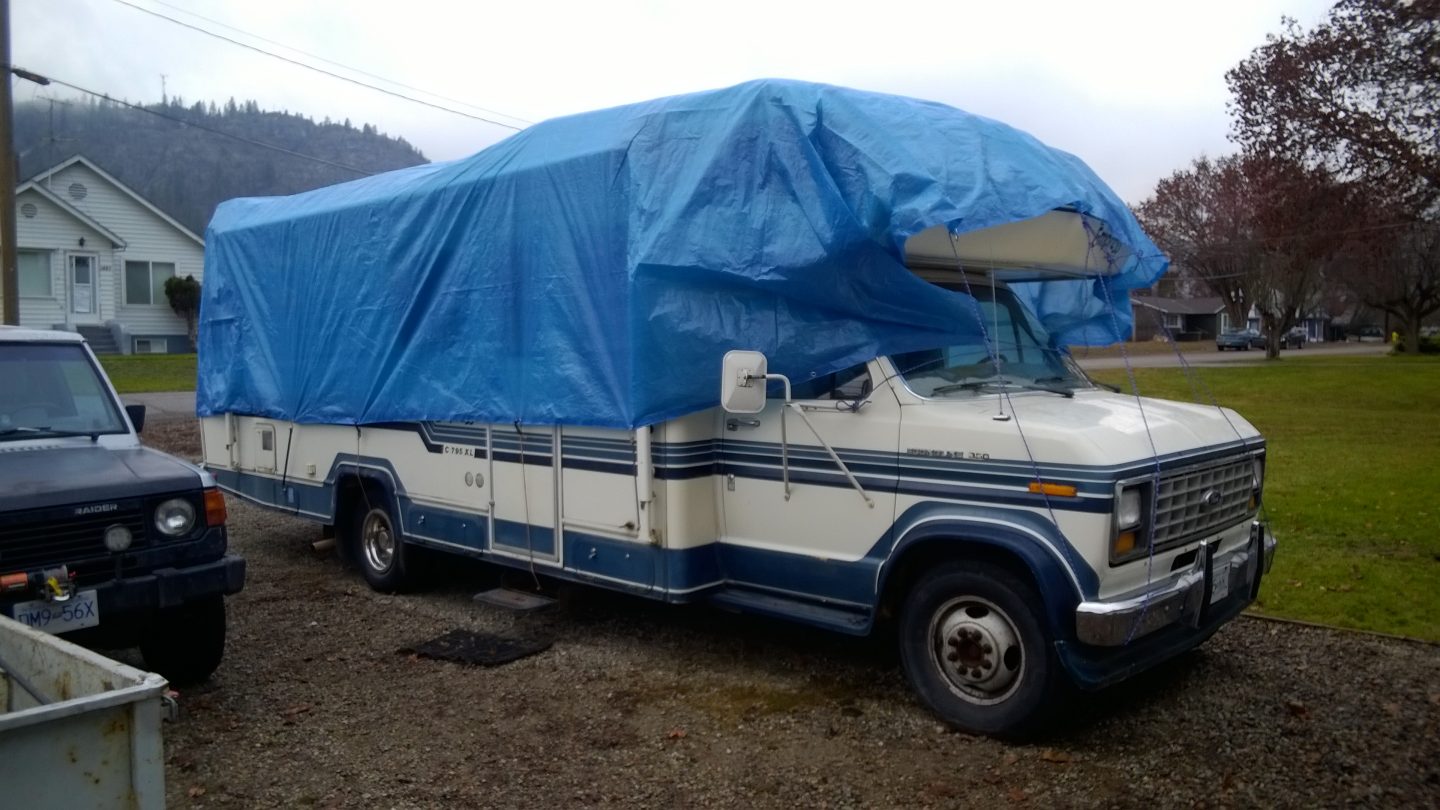 The parts came and we had our first snowfall..  but it melted !  So I was able to get the vent lids and Covers installed..  And now the Empress is covered for the winter…  this blog will continue in the spring when I get to work on it.

And of coarse the snow is long gone..  and the Empress is on the list of many things to do..  The tarp is off and I bought a new deep cycle battery for it..  Plus new curtains have been ordered for the bedroom.   Time to get to cleaning & repairing.  ! 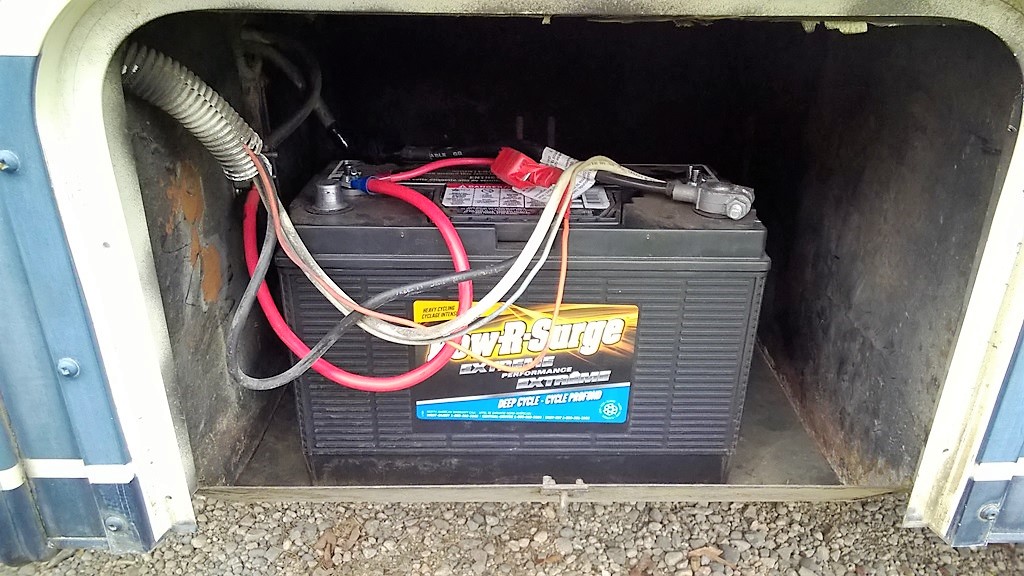 This is the largest battery I could get.  There is room for two.. but they are pricey.. so one for now.

We have spent two days cleaning and I’ve repaired a few things on the list.  The fridge cleaned up great !  no broken parts and it works on power perfectly.  I even fixed the light… with a LED bulb.  The broken cupboard doors have been re- glued … 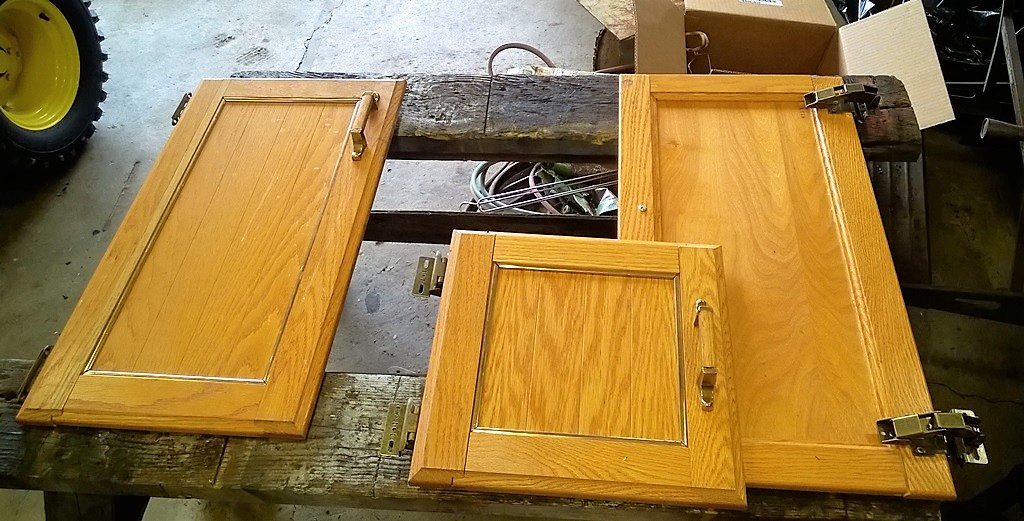 Everything has been vacuumed and washed.  I also took time to clean out all the outside storage compartments. 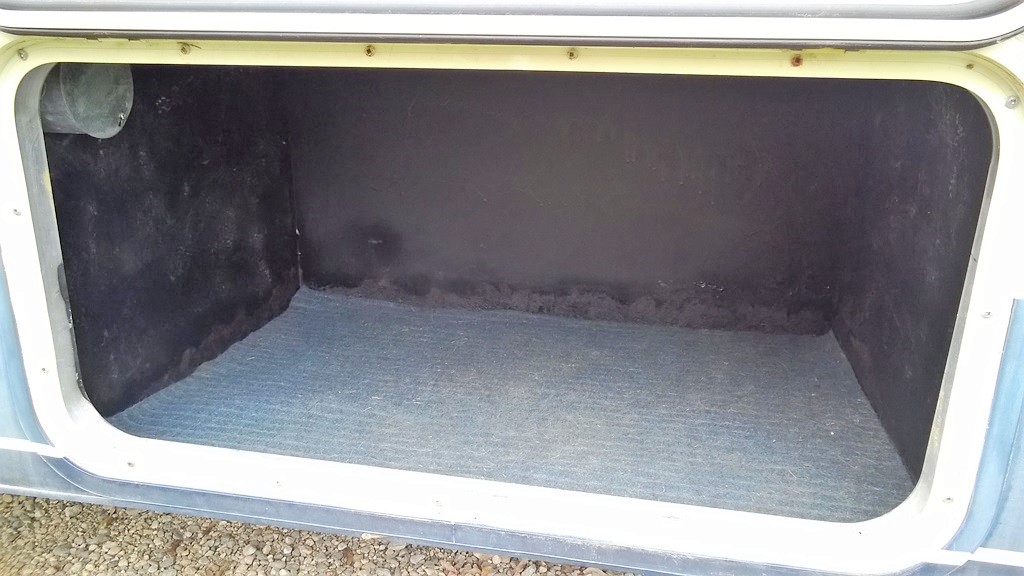 Like this generator cabinet.. one of four cubbies.  Cleaned and carpet added. 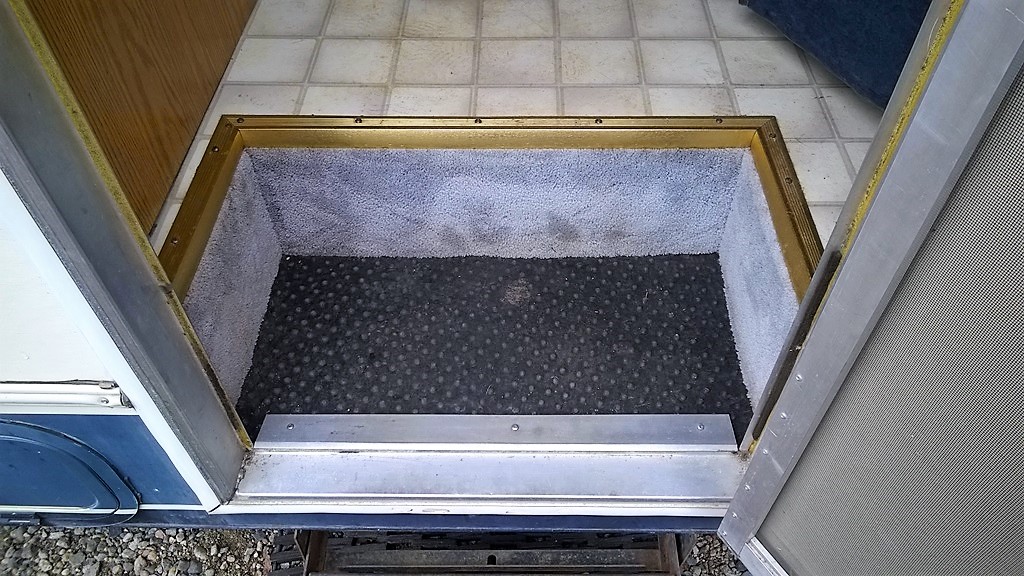 Even took the time to install a rubber floor in the entrance step.  I’ve ordered a new sink & faucet for the bathroom.  The plumbing is next.

I removed the toilet and the bathroom faucet.  hooked up the new faucet, and plugged the toilet line.  Then I pressured up the water lines.. I wanted to confirm where the leaks are..  Turns out to be the toilet valve ( not the tee) .  so I replaced that..  the hot connection to the faucet was leaking too..  easy fix.  And that takes care of the plumbing!  So I removed the vanity top.  and I’m gluing new formica on top. 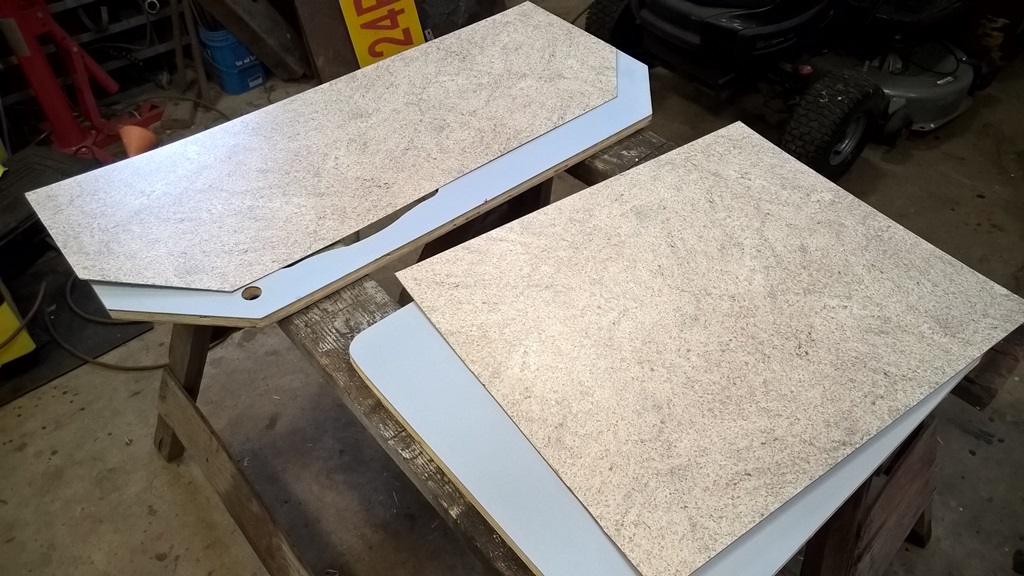 And the night stand at the same time..  much better (neutral color) .  And so this is what the vanity top looks like.. 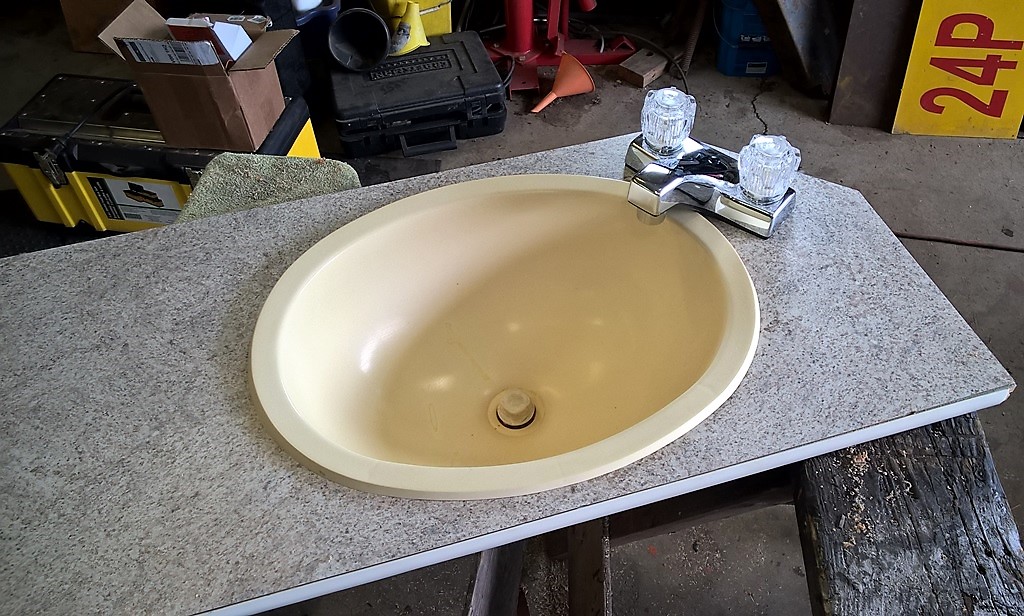 With the new faucets and I have polished the sink so it looks way better. Ready for installing… which is not easy..  I have to use a mirror to see the screws… and bend my body in ways that hurt…

Turns out it was easier to put the counter back than take it out..  I repaired all the plumbing leaks and put the bath back together now. 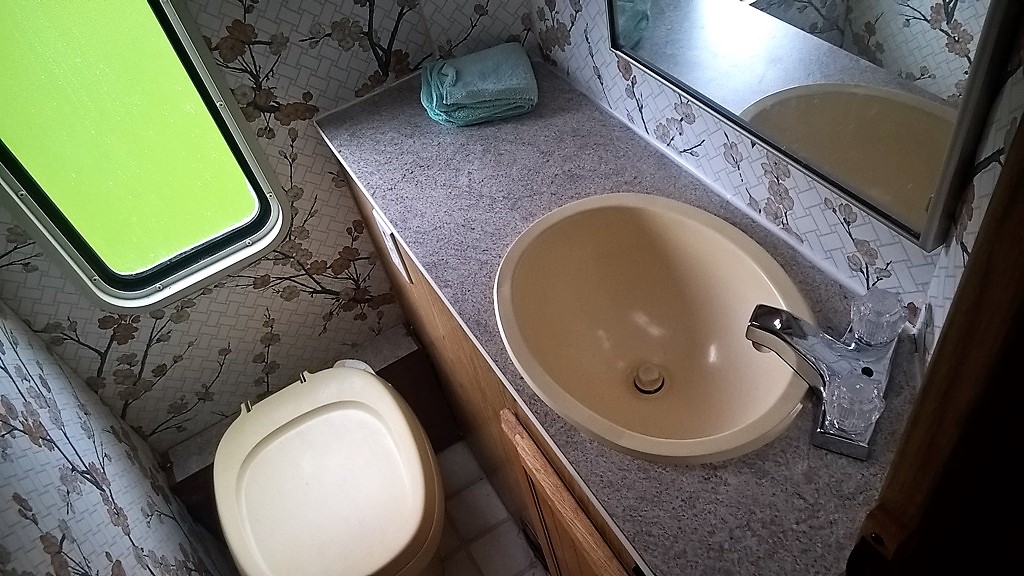 Looks much better.   Remember what I said about free is not really …  well because the Empress was not winterized properly .. I’ve had to replace all the faucets, the toilet valve and a few fittings.   We have replaced the curtains in the bedroom..  They are thicker and make the room better for sleeping.   I have also changed the top of the night stand..  added a few goodies too. 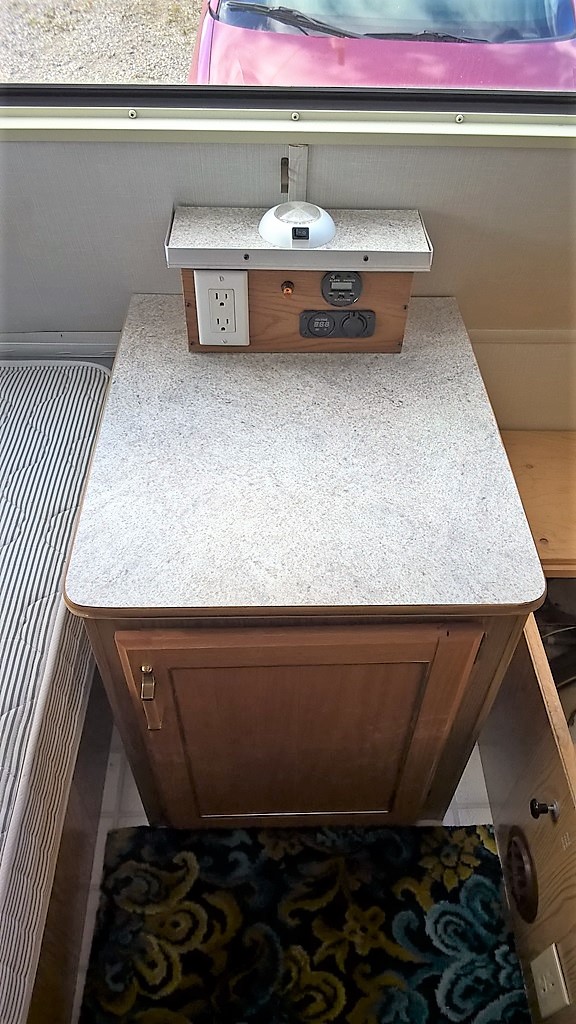 Now we have a LED night light , clock with alarm, a better 110 plug, a voltage meter and a USB charge port.   So now we are good to go.. 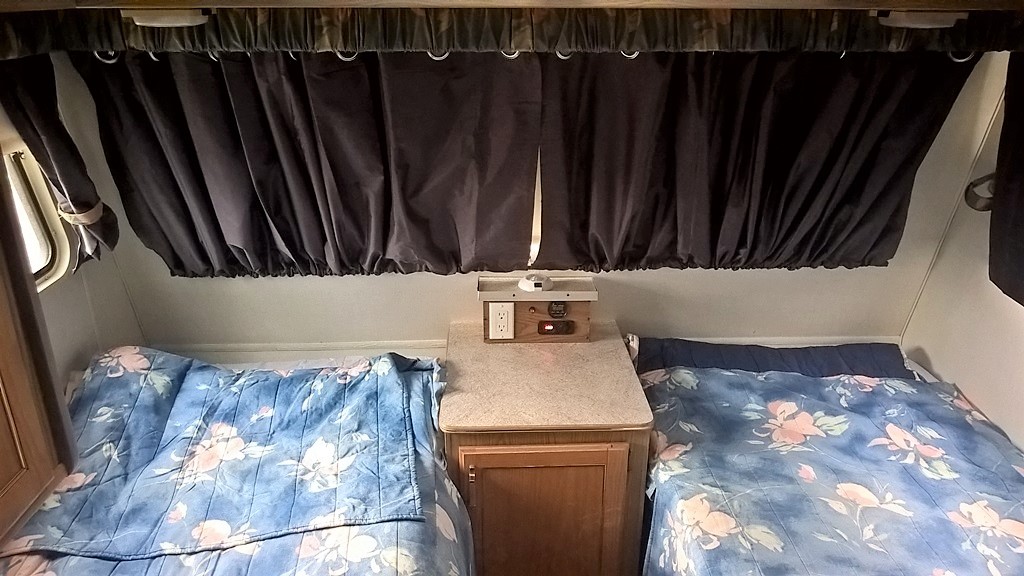 I still have a few more things to do..  they are outside.  Like re- sealing the roof.  That will be done after we get back from a shake down run this May long weekend.  But I did re seal the hot water tank ..  and clean the remaining moss from the higher surfaces. 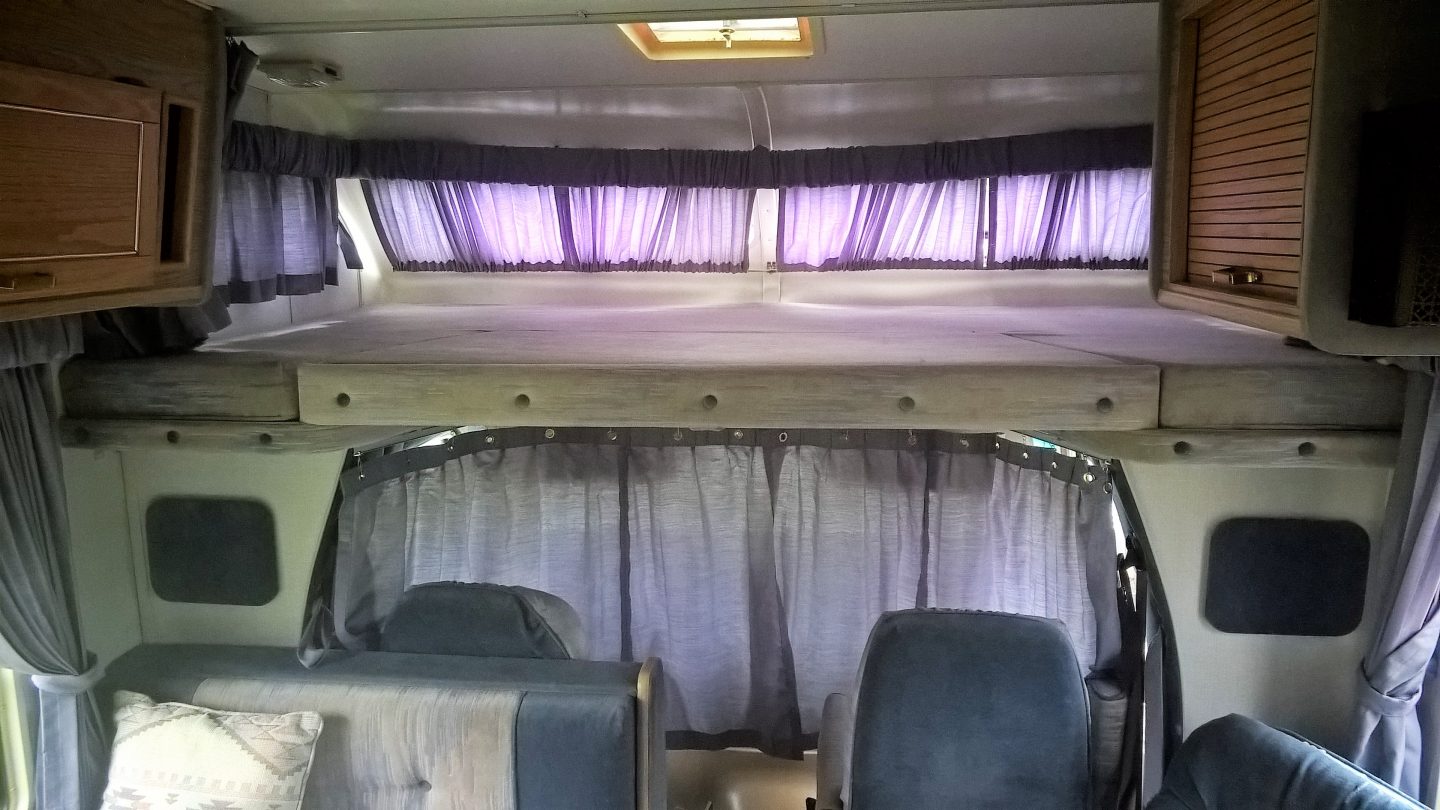 The curtains are all back in and clean..  In fact the whole interior has had a wash..  and is smelling so much better.  I have tested all the propane systems ..  and all is good.  The other day I coxed the motor back to life with some gas down the carb.. it’s been idle since October.  The I took it out for a good drive.  After putting in some higher grade fuel..   the motor settled down a bit..  still an exhaust leak up by the motor..  but we can live with a little extra noise.

Well we made it 1 1/2 hours up the north fork valley to a rec site for a weekend of R&R..   Everything worked great..  even towed the utility trailer with the quad in it..   Only one thing happened unexpectedly … the window on the door came loose..  So I need to fix that..  We got to try out all the systems.. even the furnace. 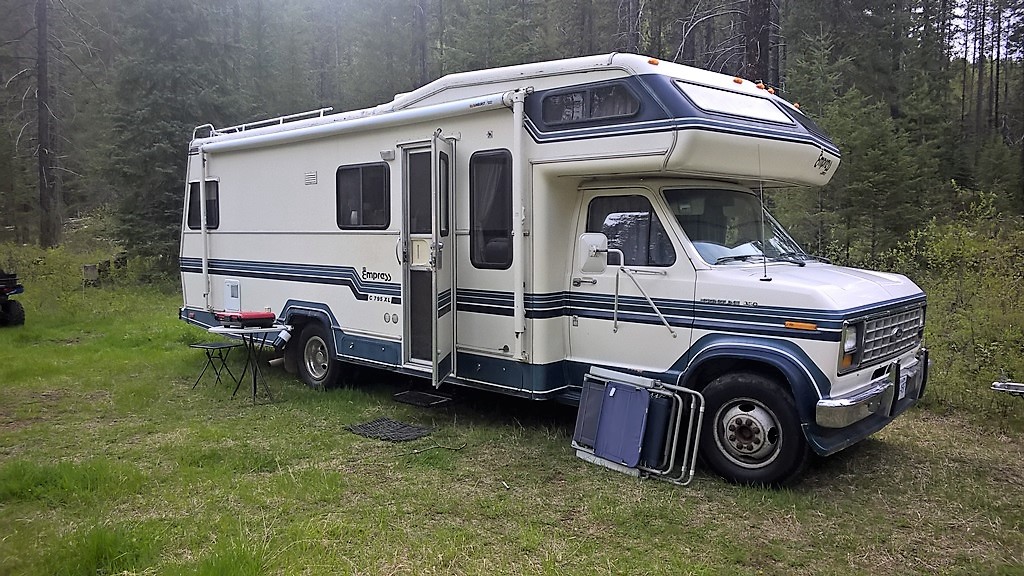 What a great time..

So the plan was to sell the Empress after family camping ..  use it there and then Let Go.   How ever just three days before that someone approached me wanting to buy it right away..  so I did..