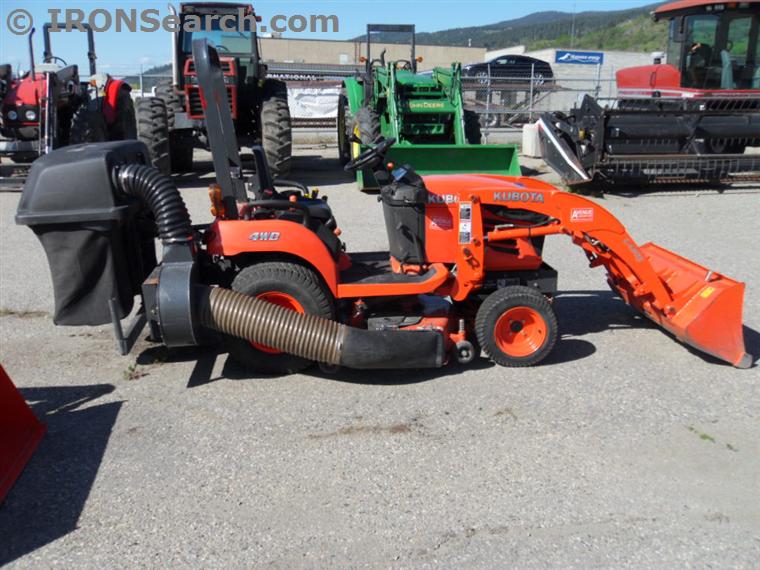 Finally the tractor of my dreams.. !  And there was a used one for sale that I could afford.  These are the best of the best sub-compact tractors. Diesel, 4×4 , fully automatic, power steering… power everything.  If there was something negative you could say it would be the limits of being small.. it will NOT pull your house off it’s foundation… but that’s the price of fitting through a 4 foot gate.  Most of these come with the front end loader and a baby back hoe.. but the one I bought has the loader and a 54 inch mower deck , a vacuum bagger system and a 5 foot snow blade.. As an added bonus I got an extra set of tires & wheels Plus the three point hitch pieces so I could hook up other tractor stuff. 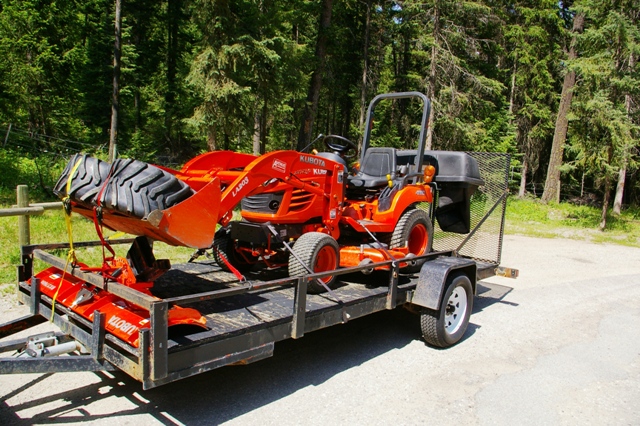 Here’s a photo taken half way home from Vernon.. The spare rear tires are liquid filled and are heavy !  so I used the loader.. and I held down the snow blade with that weight too.  HA.  I can see that loader being handy for moving stuff.. In fact that snow blade was heavy.. so I put a chain on it and used the loader to move it to the Franknport. 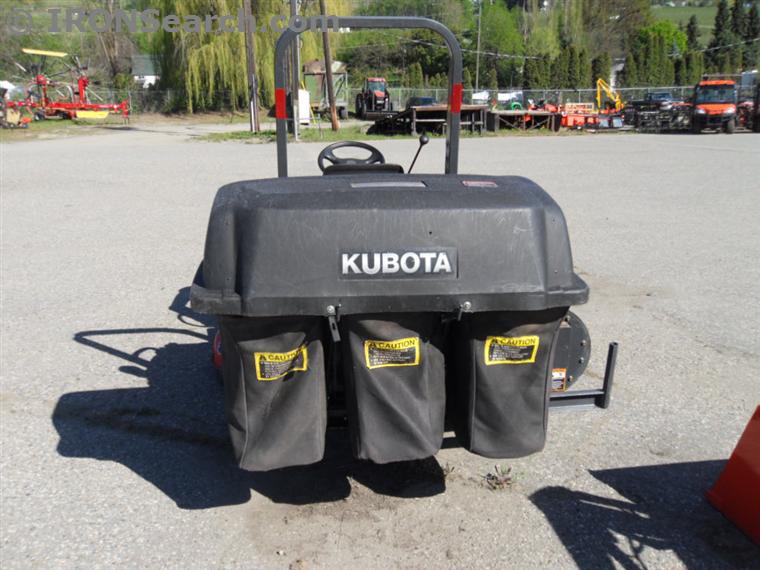 When I got home the grass needed to be cut.. so without hesitation I flew at it.. I filled those three bags up four times.. that’s a big pile of grass !  The blower has big pipes and is driven from the rear PTO..so it “sucks” and won’t plug up. It’s much quieter than I thought it would be.. so was the deck.. I just needed to adjust the deck a bit for level.. and sharpen the blades..to get the cut perfect..and I’m thinking that I will remove the bagger for now and use it more in the spring and fall for yard clean-up. Also the loader comes off in minuets. Then I’ve got the best mower ever ! 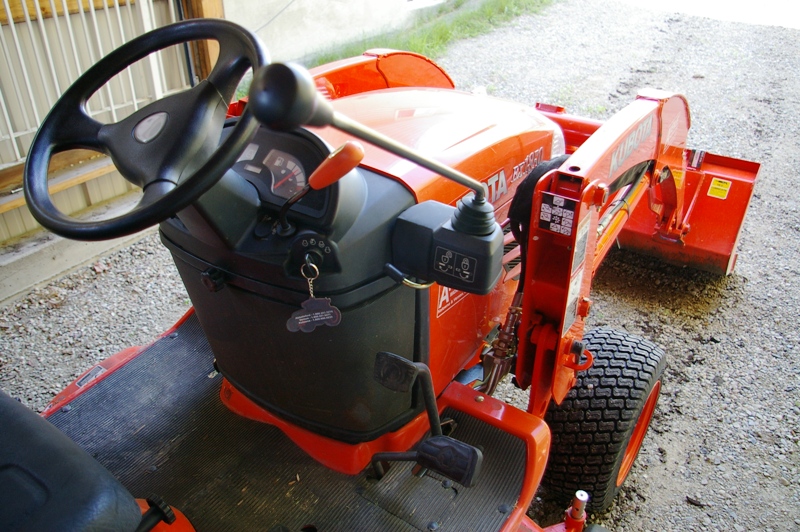 This is also going to be one handy machine this winter.. I’ll change to the calcium filled lug rear tires and the 5 foot snow blade will make short work of any snow that may fall here. 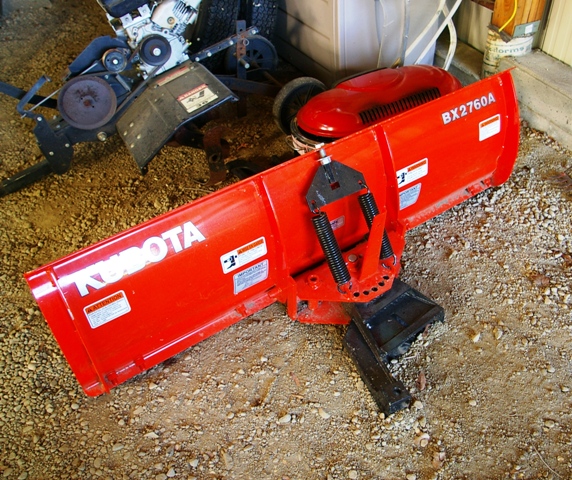 Look at how new the blade is.. I doubt it was ever used.. I’ll change that.. A few small bit & pieces are missing but nothing that can’t be found, just pins & stuff. 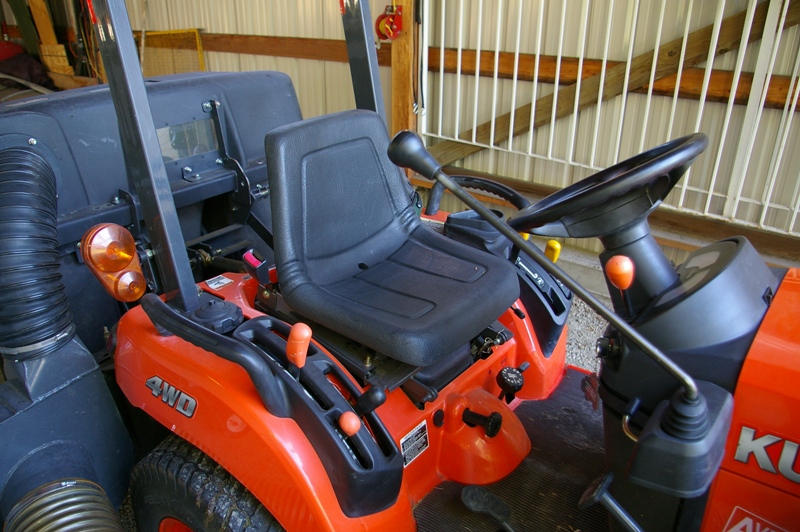 There is great visibility from the seat, and a ton of room for your feet too..  Hands down the most comfortable tractor I’ve ever tried.

I’ve now removed the blower, and I took the deck off.. (easy) and clean it good and sharpened the blades.  Also tweaked the level adjustments and now I have a perfect cut.. Wow is it ever nice to mow the lawn.  I’m getting the 3 point hitch on too and making a 2 inch receiver for trailer hitches.. 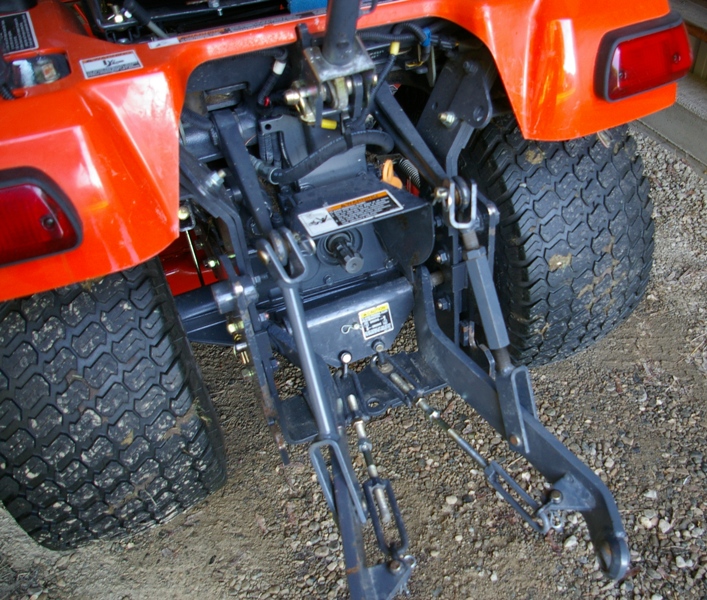 The front end loader comes on and off in seconds.. so no need to pack it around. 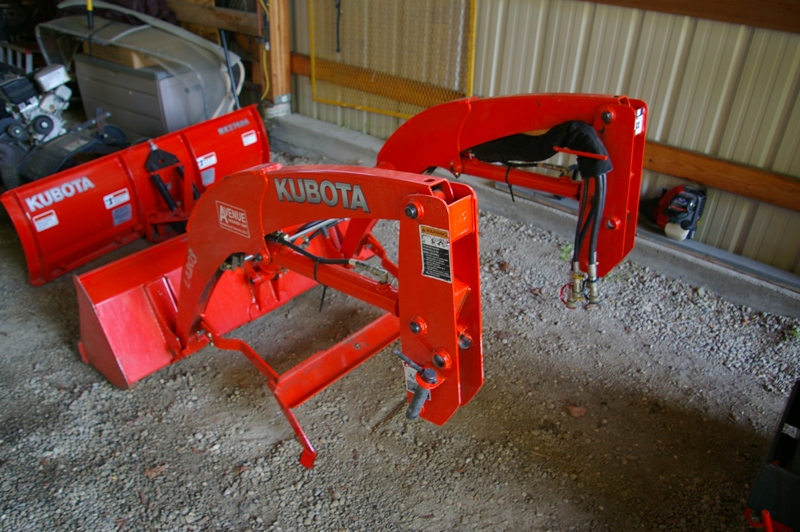 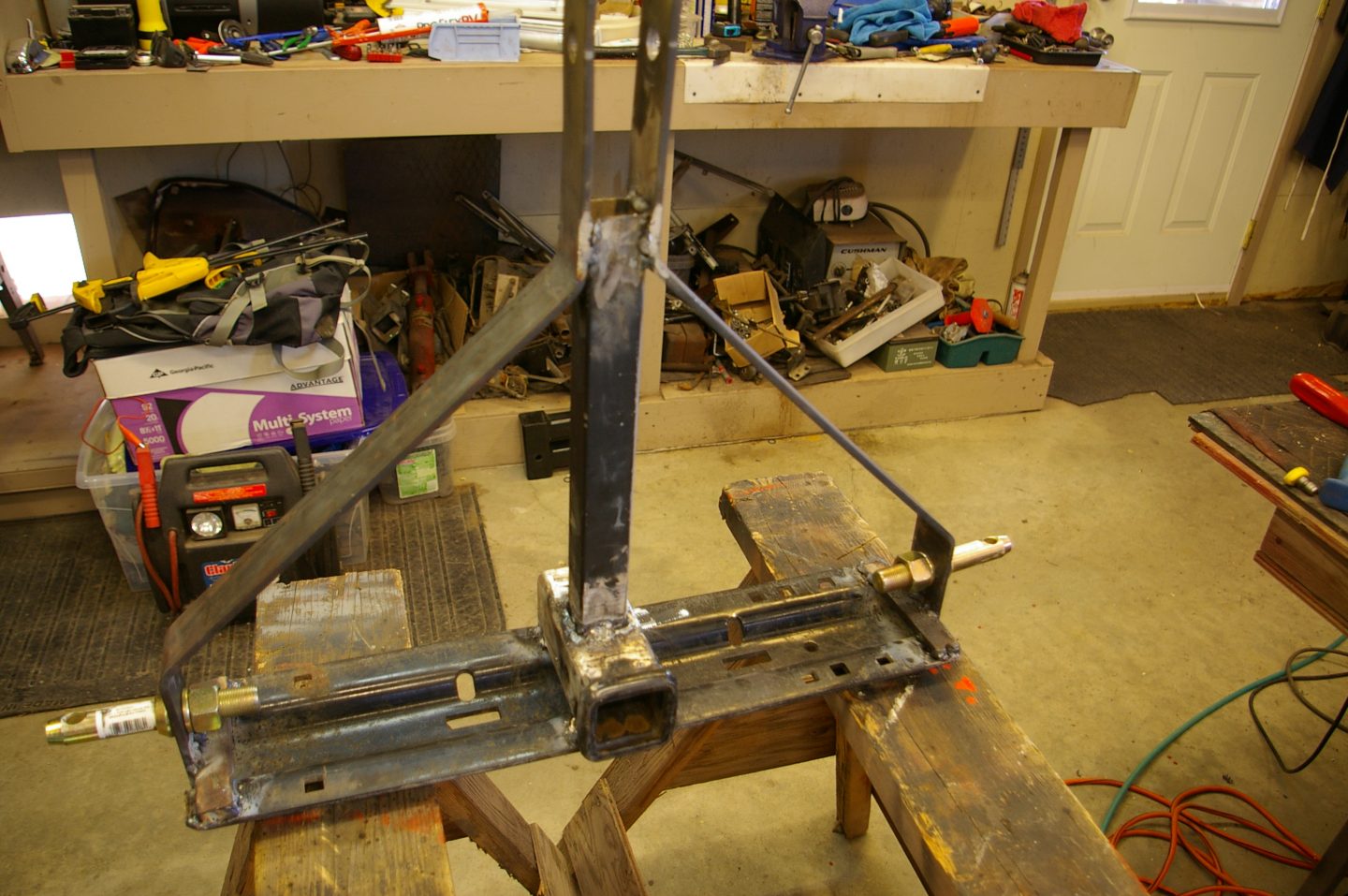 I got it made.. and it’s very useful indeed.  Now I can move the trailers around (by my self) without the truck. I can see the ball to line up.. and then the tractor lifts it up so no cranking.. I moved the travel trailer too ! But I shouldn’t really do that heavy a trailer..  It exceeds the trailer limit of 2000 lbs. 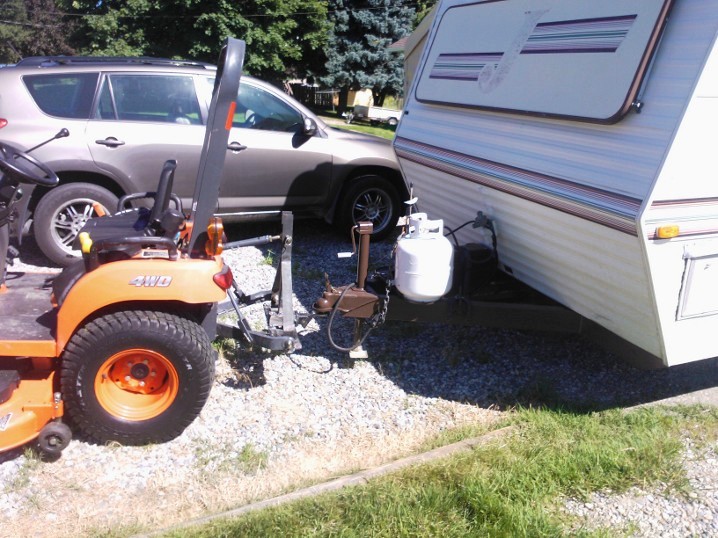 Pretty cool EH.. Plus since it’s a 2″ receiver I can plug other stuff in.

Well there is some work too.. Love the things this little tractor can do.. I take the loader off when it’s time to cut the grass.. And back on for work stuff like moving the garden shed.  Picked up one side and put some rollers under it and pulled with the BX.  Also moving the trailers around with the BX so I’m not driving my truck on the lawn.  Digging some holes ..filling some holes.. I had to drain the liquid from the lug tires because it was rotting the tubes.. so I had the tire shop remount them tubeless. And I’ve ordered the lug tires for the front too.. So this winter I’ll run on all four lug tires. 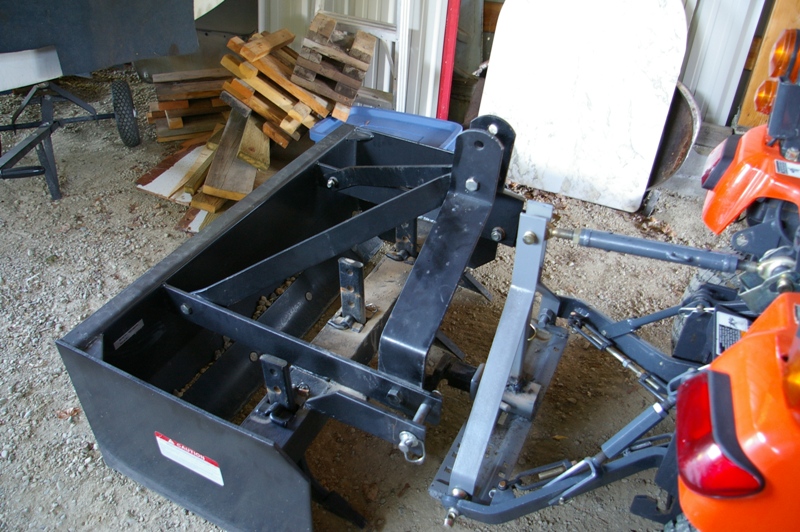 Here’s the 4 ft box blade /scraper .. probably the only attachment I’ll be buying for a while.. after a lot of thought this is the most useful attachment I could think of. It’s good weight for the back at 300 lbs .. and it’s a grader / leveler.. and if you lower the teeth it will till the ground like a plow.  a great tool for driveways and plowing snow.. 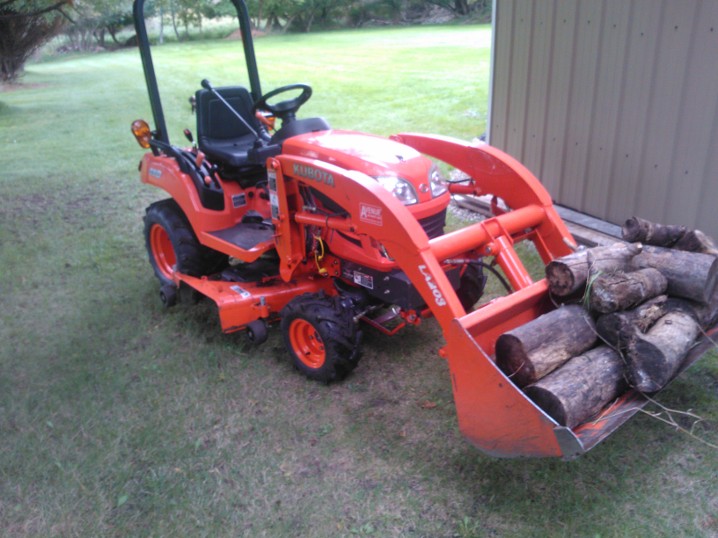 Above is a new photo ..moving firewood from out back.. but it shows the new tires I have for the BX .. they are called bar tread tires standard from the factory.. All summer I ran on the turf tires that were on the tractor when I got it.  They are great for cutting grass..but not so good for digging.

Got the Kubota all ready for plowing snow now.. Bought an extra cylinder for the angling the blade and now I have full control of the blade ..

Had to fix the headlight switch.. and install the angle cylinder .. then it was back to the franknport for the winter.. in the mean time the cat thought it was a great thing to guard..  Those temple cat’s !  geez.. This winter while it was cold and I was plowing the snow .. the plastic rear fender got cracked , and one tail light too.. The fender is actually made from a cast resin.. quite thick.. but the cold makes it brittle.  And so in the spring it needs fixing..

Time for the yard work and raking the yards..  Done… and I piled up the compost.. mixed in the old chips & grass/ leafs..   Then it was time for some tractor love.. and fix the broken fender..  I used polyester resin & mat to repair and reinforce the cracks..  Then I added 3m gravel guard to the rear corners.. and changed the tail lights to LEDs .. Also moved the turn lights up higher on the roll bar.. better seen from there.

It’s now six years old and has 780 hrs on the meter..  I’ve put 45 hrs on the tractor since bringing it home last July.