It’s the beginning of February….

So.. what the hey.. lets start another project while it’s still yucky outside.

Here below is a photo from the ad. 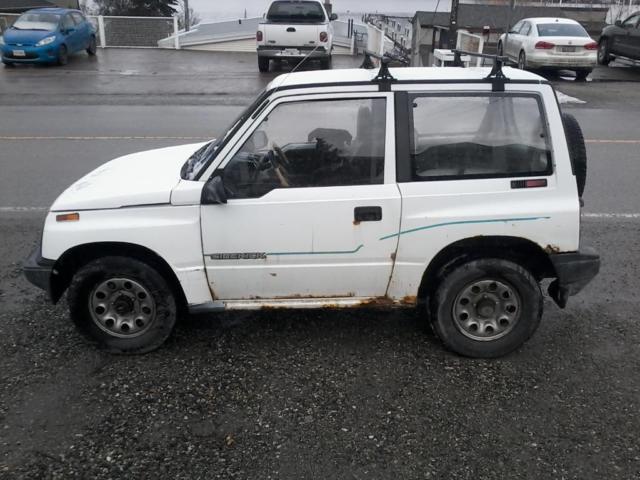 Folks from down under call this a ZOOK.  A Suzuki Sidekick.  They also refer to this model as a TIN TOP to note the difference from a convertible like the 92.  This version comes in a 2 door or a 4 door.   I went to Vernon and bought this from a guy who does drywall taping.. Which is very evident when you see the interior.  Used as a little work truck.  But it was being used.. not sitting for years or even months.

To be fair I was warned..  I don’t care about messes in cheap vehicles.  And yes . another cheap one.  A little bit more than the 91 Tracker.  BUT I drove this one back home no trailer needed.   So that’s got to be worth a bit more.  I wouldn’t say it runs good.. needs a bit of tweaking.   But gets you where your going.  What I like about this little ZOOK is that the things it needs are the things I’m good at..  and I have most of the parts ! It’s a cosmetic disaster not a mechanical one.  It has less rust than the 91.  And it has all of the body parts..  So a great place to start.  I’m going to do a walk around video tomorrow and talk about the  ZOOK.  And I’ll post that on youtube.  But I’ll still write that stuff in this post too.  Without putting the Zook on a hoist , pulling the wheels… etc..  The mechanical needs are mostly unknown.  But after driving it for 3 hours through two cities and 300 kms of highway.  I can say there is no issues with the clutch or transmission.  The motor is running cool and not puffing smoke.  In fact it has good power, and climbed the hills without slowing.  The steering feels fine , and the brakes are doing the job.  Even the park brake works good.  What is noticeable is the idle is quite high.  And starting from cold the motor stumbles.  The check engine light came on briefly when the stumbling happened, but never again.  Peter will help sort these thing out.  Also the muffler is most likely toast and once again no tail pipe.  My ride home required ear plugs… wish I had some. 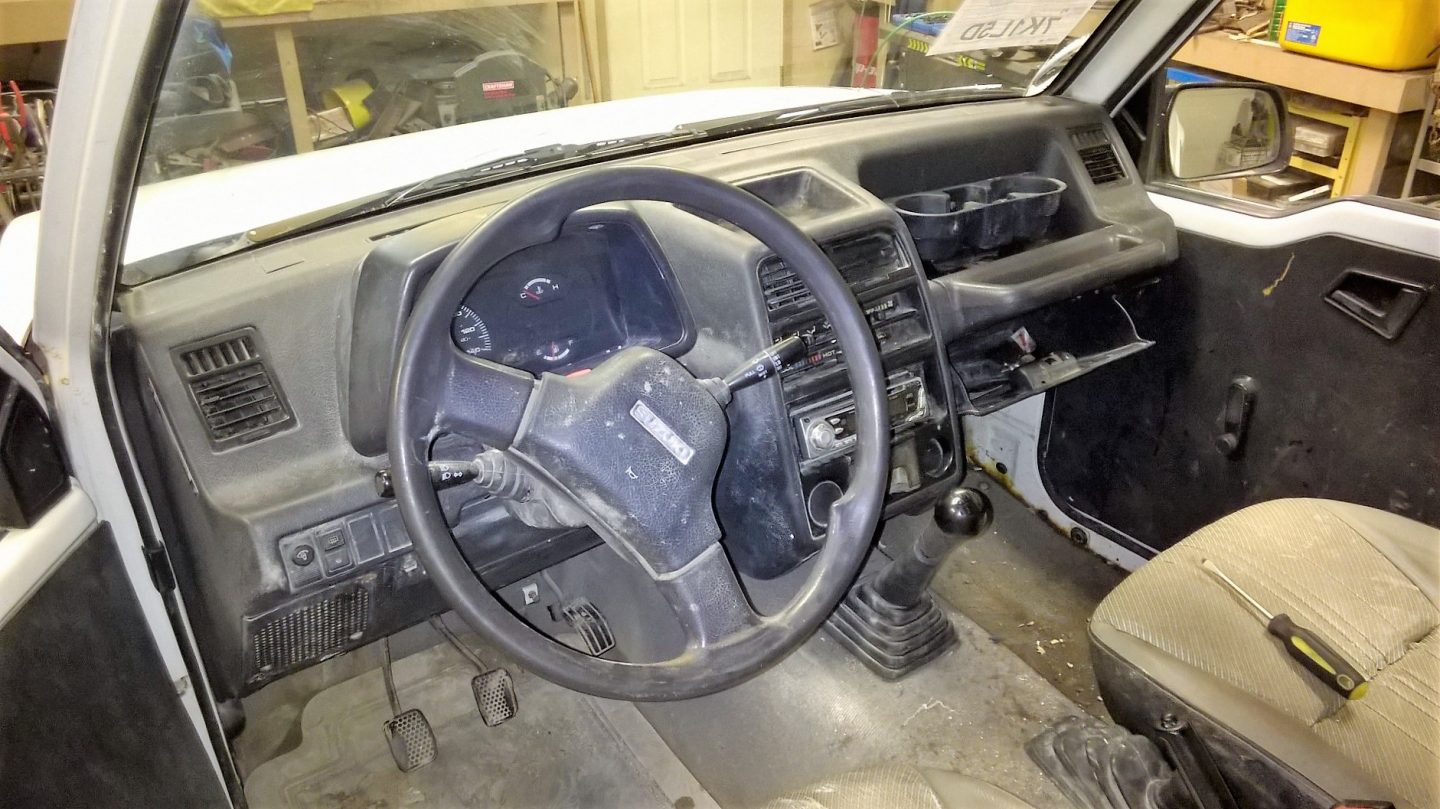 This must be the very base model.  No center consoles, No cigar lighter, no tachometer, and flat ugly door panels.  But the dash is all there, no missing bits.  Love those cup holders,  Totally hillbilly.  but handy for my  Tim’s icecap on the way home. 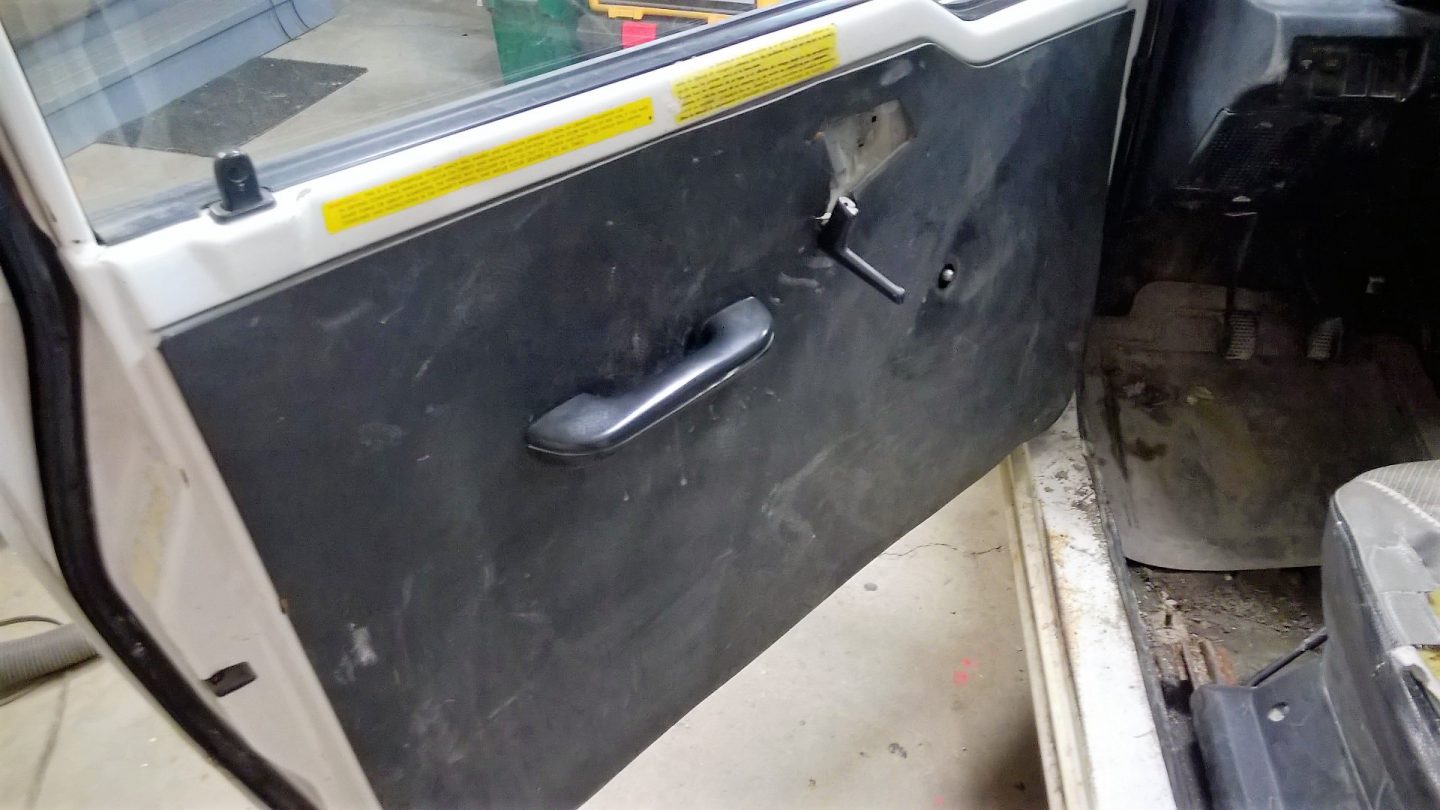 The inside drivers door handle is broken,  as well as the window regulator.  I have those parts ! YAY.   The seats are way worse than the 91..  So that’s a problem to solve.  The carpet looks rough too..  Seat belts are rough as well..  Again I have extras.  As for the body:  The registration shows a “rebuilt” status.  That means it had an accident bad enough for ICBC to write it off.  On a 26 year old vehicle that wouldn’t take much.  I suspect the front drivers corner was hit.  The fender, grill and headlight are newish. But probably came from a wrecker. And the fender is not fitting proper ( rubbing the door) so it was fixed at home.  Once I pull the bumper cover the truth will be revealed.  Aside from that it’s the normal rust repair for me.   Check out the seats ! 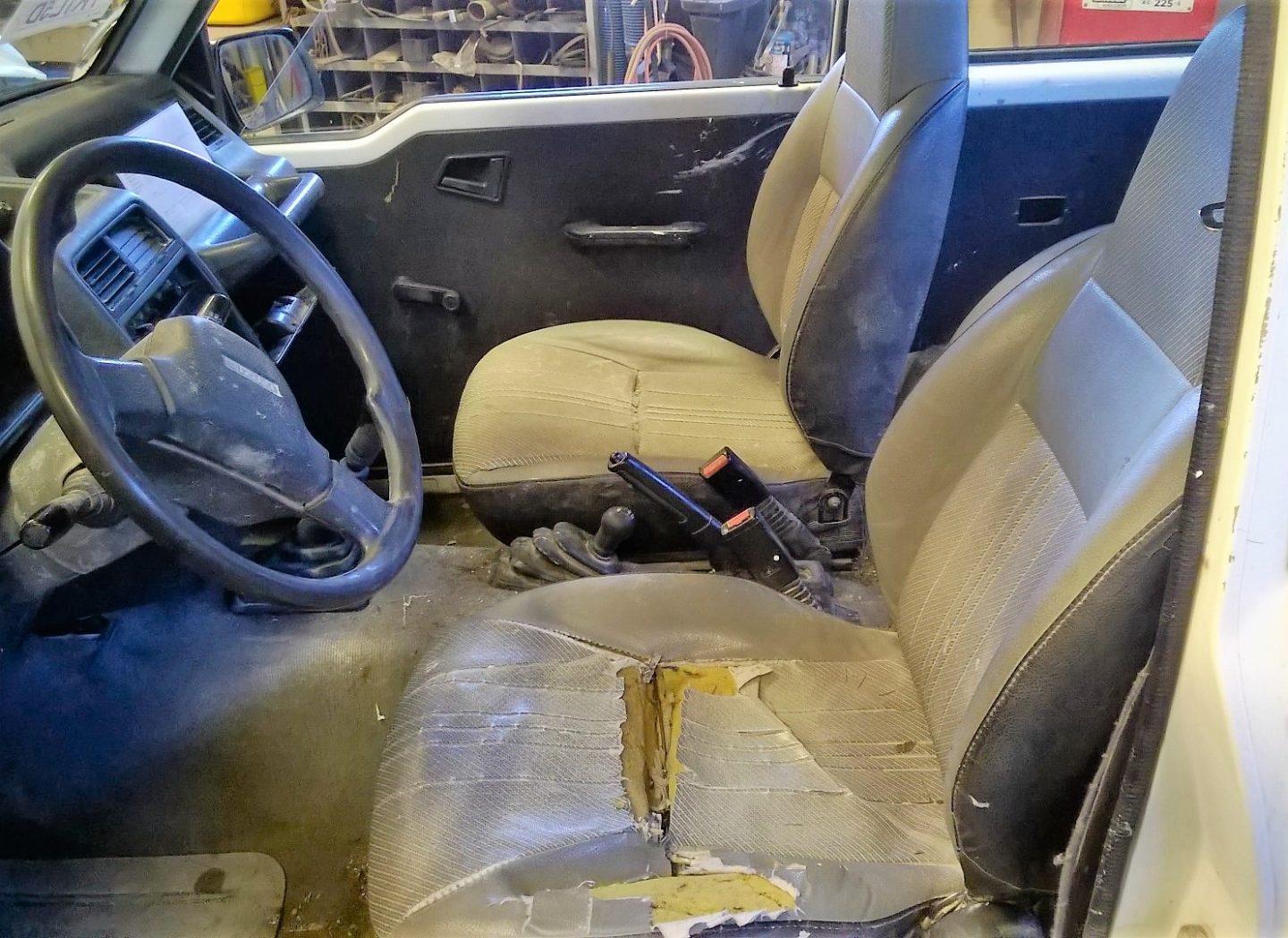 Yucky…   These seats are exactly the same as the 91 Tracker.  But oh so wrecked.   The rear seat is ok, just dirty.  This may be pricey to fix these.  I’ll need some quotes from the two upholstery guys in town.  I would like them to have a more black look to match the dash and the door panels.   Which brings me to color choices.   Red came to mind first.  I found a red one on the net that I liked.

Don’t care for those gray panels though.  Good thing  I kept the rubber body trim from the Tracker, I also have the rocker covers at the bottom.  And I like the paint treatment on the bumpers.  This time I might paint the mirrors,  door handles and grill.  But that’s just me running ideas through my head.

After making that video…  I got anxious and I couldn’t resist turning a wrench and spinning a screwdriver.  So I fixed the drivers door.  Replaced the window regulator, and the inside handle.  I also removed the drivers mirror to see why it was hanging off..  It’s broken.  I have another.  Dug through my spare parts bins and pulled out the bits a will need. 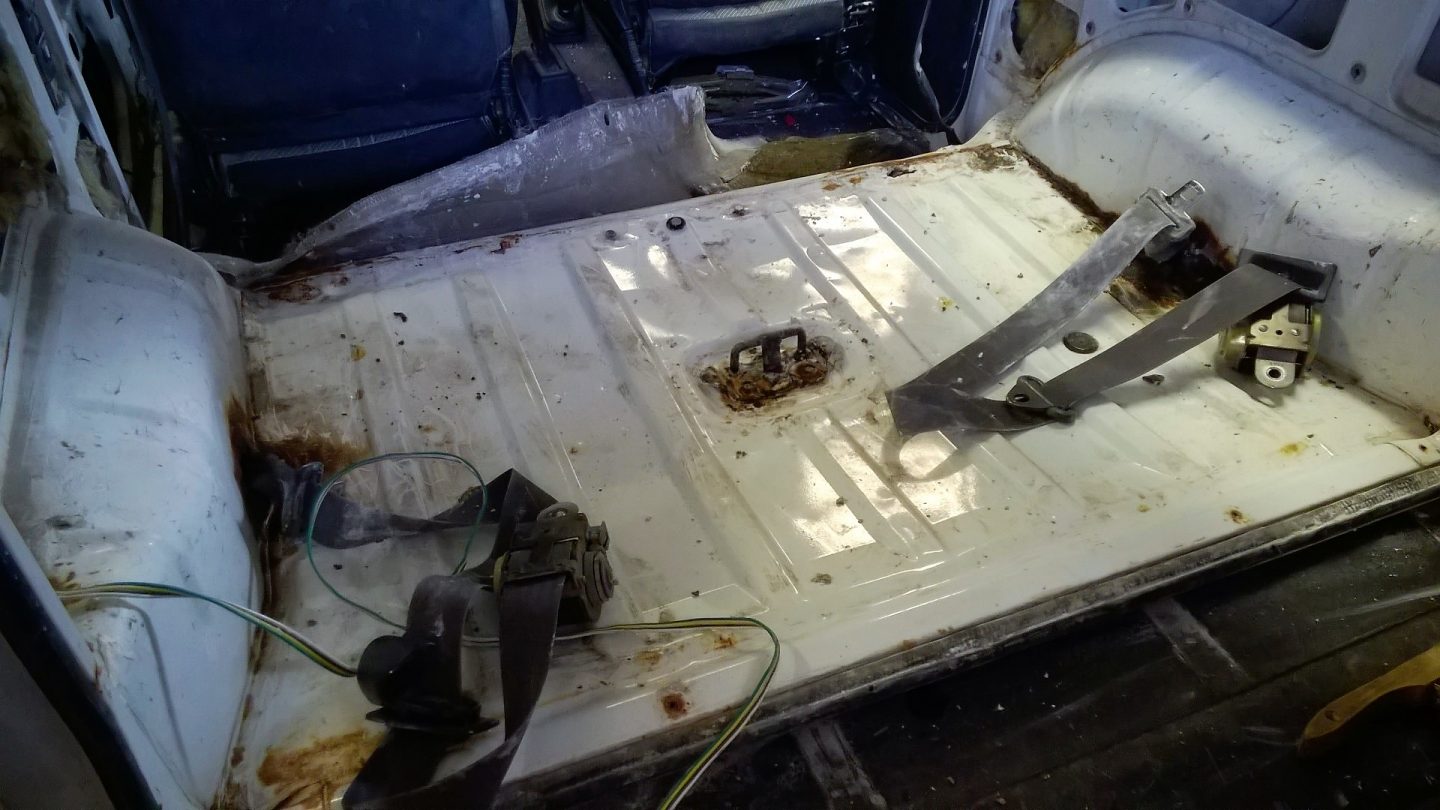 I also couldn’t resist taking out the rear carpet.  Expecting to find more rust..  I was pleasantly surprised to find a clean shiny white floor !  First one I’ve seen in a while.  However typically the bottom seat belt bolts are rusted so bad that the metal will fall apart when you try to remove them..  So I will just pull them out and weld new metal plate there.  I need to get the carpet all out soon as I’ve found it to be damp.  I think buddy spilled a lot of water and drywall mud in there.  Or the wet is coming in from the road..  Could mean more holes.

Here’s one more Video.  I plan to do videos more.

Feb 8 2016:    Not much going on today.. so I wandered out to the shop.. and started stripping more stuff out.. seats, carpet, right side door panel, seat belts.  Now I can see the extent of the rusty floors.  Turns out the wet carpet was from me driving it home.. The holes are big and on the passenger side it’s right up where your feet go.. behind the tire getting all the muck.   So four holes to fix in the floor and three in the rear.  Not bad. 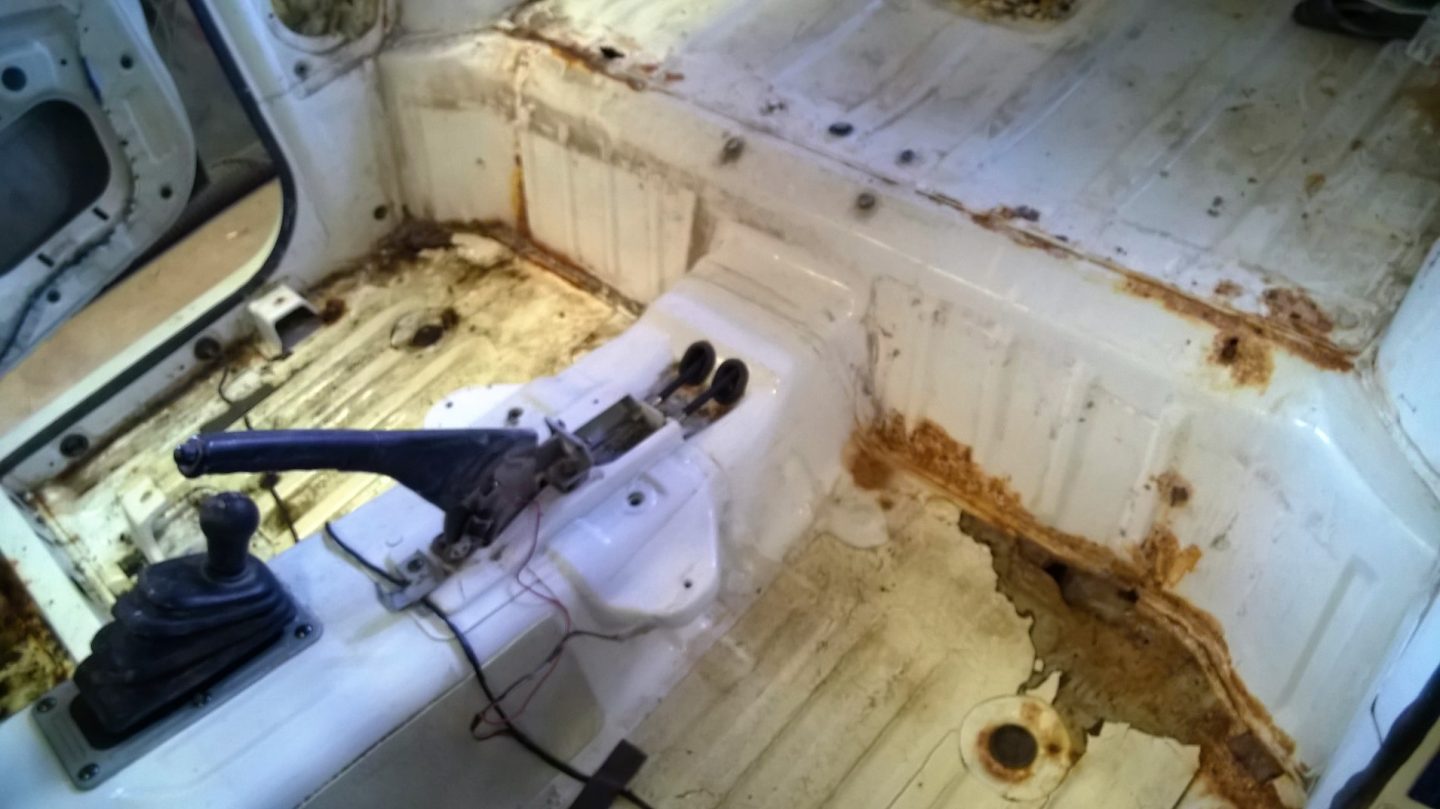 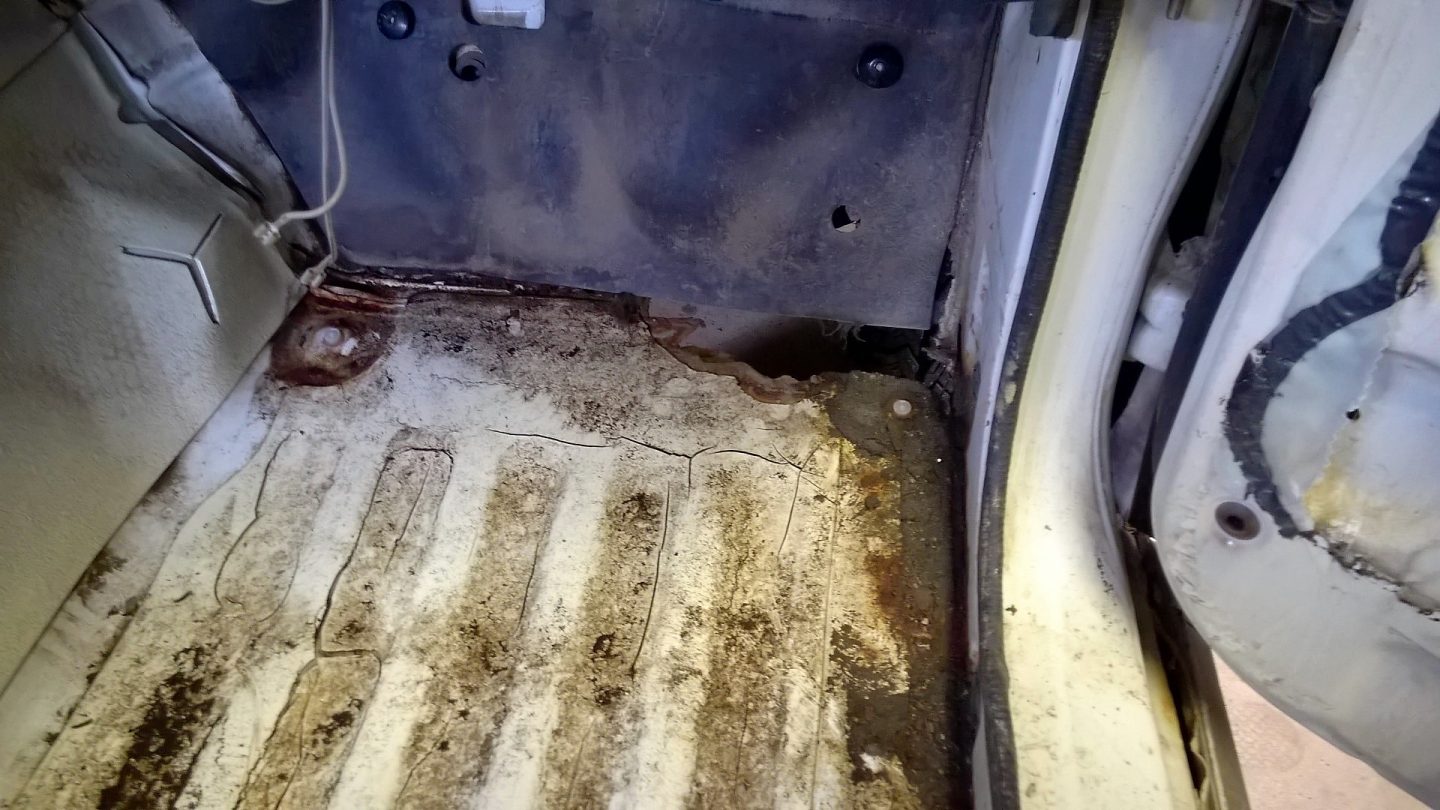 One bigger one up front in the passenger foot well.  This one I did not see coming..  The drivers floor I knew about.   I now need to fix the sliders on the drivers seat and put it back in..  We plan to trailer the Zook over to the auto shop to do the inspection..  While there we will install  a new muffler and tail pipe.

One more video..  then it’s the Mechanical Stuff.

Onward to the next  PAGE 2   the Mechanical Stuff.