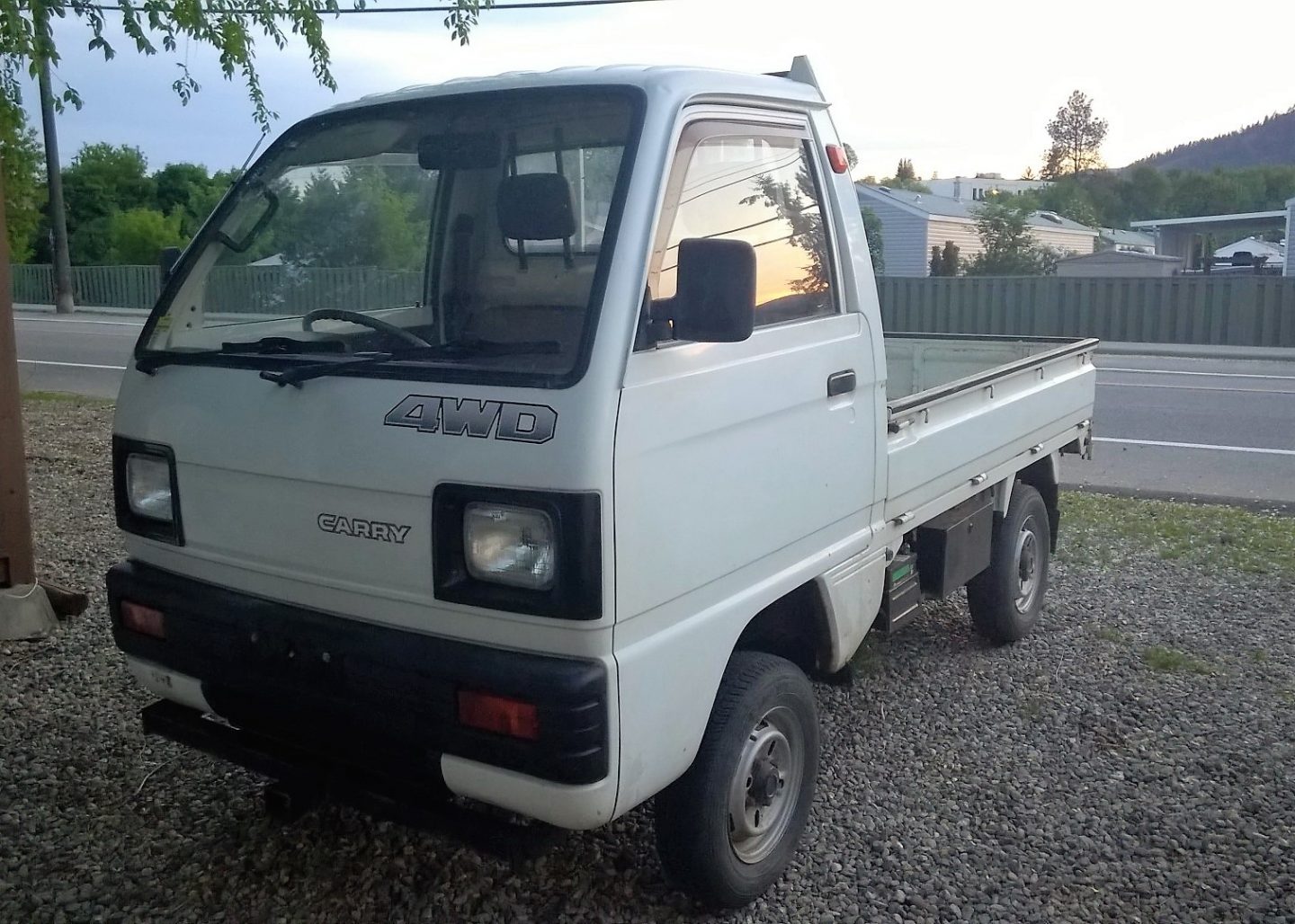 Soo..  I actually bought this little truck for my business.  I’m doing a lot of running around picking up repairs and getting parts..  Using my big truck with the BIG motor is costing quite a bit.   so now I can buzz all over the valley for cheap.  The little truck has business insurance on it.  On the first day of having it I went out and picked up a lawn tractor for repairs. 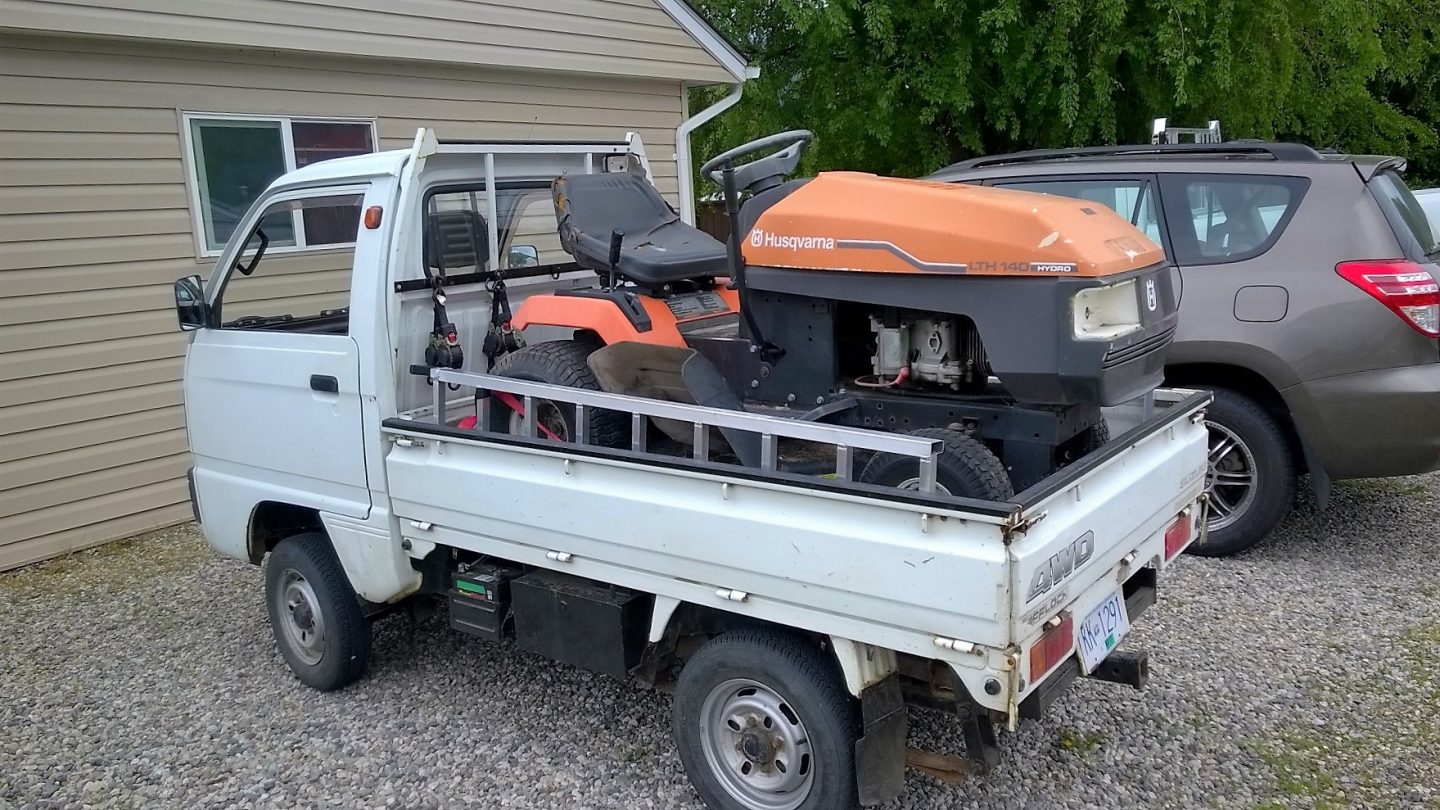 Look at that..  actually fits with a bit of room to spare..  but shows how small the truck is..  Both Dave & I with the tractor.. no problem.   so for the business Perfect !

Ya..  With side by’s costing 14 grand and up..  and even a used one is more than $6000.   This little truck is a bargain.   These are quickly catching on with the hunters..  because they carry more.  It’s fun to drive too.. and does not need a trailer to pack it home.

The odometer shows 24700 , but there is no sixth digit. And since no one drives these much on the highway, we will presume the worst would be 124,700 kms.  That makes sense due to the motor needing new rings.  The motor is a three cylinder 550 cc  Suzuki  ( not a motorcycle engine)  but similar to what was in the Sprints and Swifts.  These little motors rev very high to produce the power needed..  So the rings tend to be the first thing to wear out.  The motor uses a carburetor and simple points ignition.  NO electronics ! not even a warning buzzer for seat belts or key left in the ignition.  Very simple to work on..  I would say the only complex parts are the tons of vacuum hoses from the carburetor and the relays / solenoids that activate the differential lock and front hub lock.  YES push button hub lock..  don’t have to get out and turn in the hubs.  And it all works perfectly. 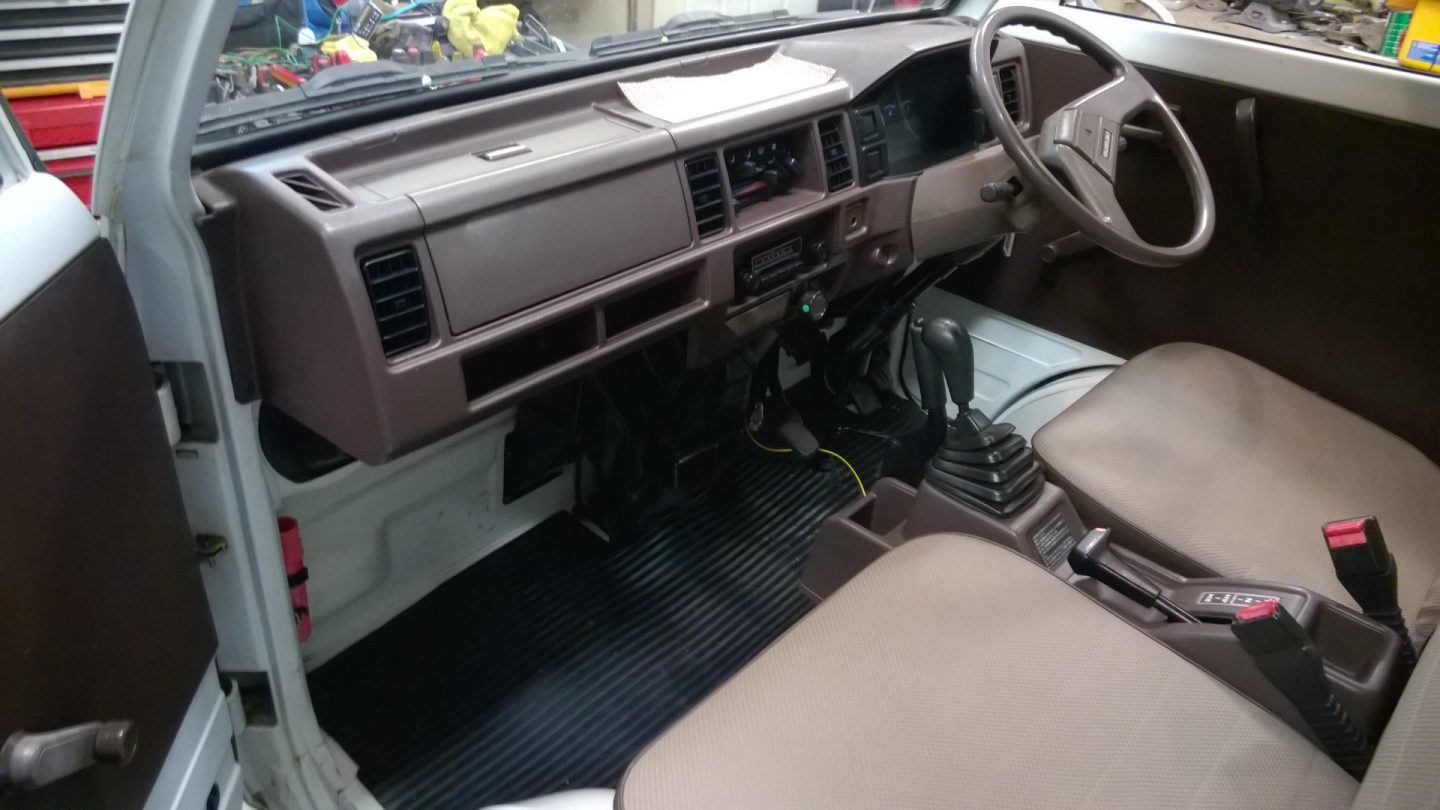 The interior is in perfect condition..  Just the way it came from the factory.  I will change out the “mono” AM radio for a better “stereo” and two speakers instead of the one.  I’m going to change the cigarette lighter out for a proper power point plug.  Also I’ve added LED day time running lights to the front with a switch on the dash.  Not much room in the cab.. so have to be careful what I add..  cup holders would be nice..  but I haven’t found a place yet.   As far as the body goes.. there is very little rust..  nothing like the rust holes in a Sidekick..  or any of the north American models.  These seem to be better steel.  Just a bit of surface rust that rubs off..  Not bad for something 26 years old.   I have a few dents to take out too..   So away we go….

A bit of Fixing :

I had some spare time ..and I wanted to polish the doors and box sides before I put decals on.  But I got a bit carried away and did some touch up painting too.  Just to get rid of the rust.

Time for a Motor Makeover:

I’ve been driving around for a few weeks now.. I love it.. fun to drive.. And it runs great.   I’m getting used to the right hand drive.   But It smokes  ! a lot.  and I don’t want to plaster my name all over a smoking truck..  So now that the shop is free.  and clean..  Time to fix the motor. 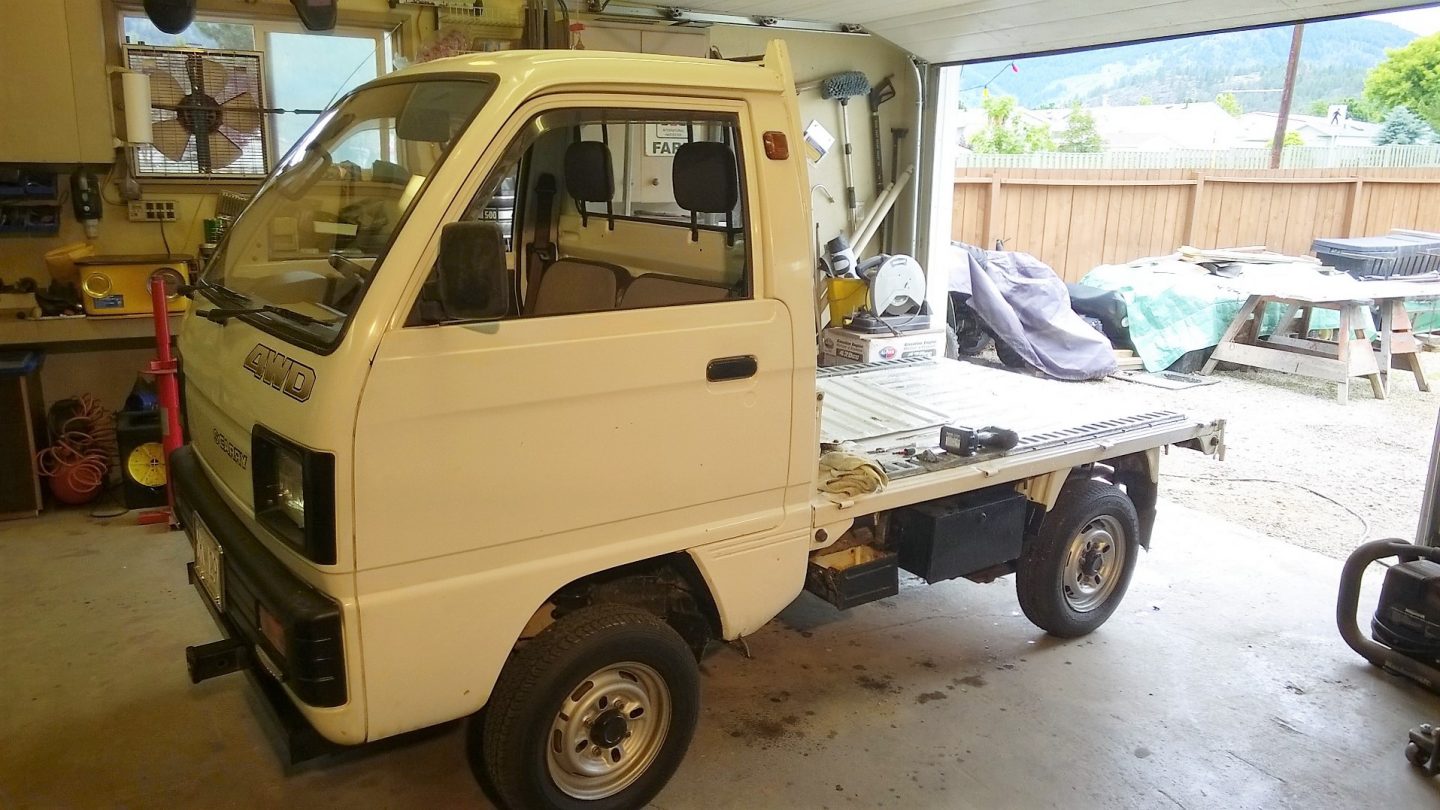 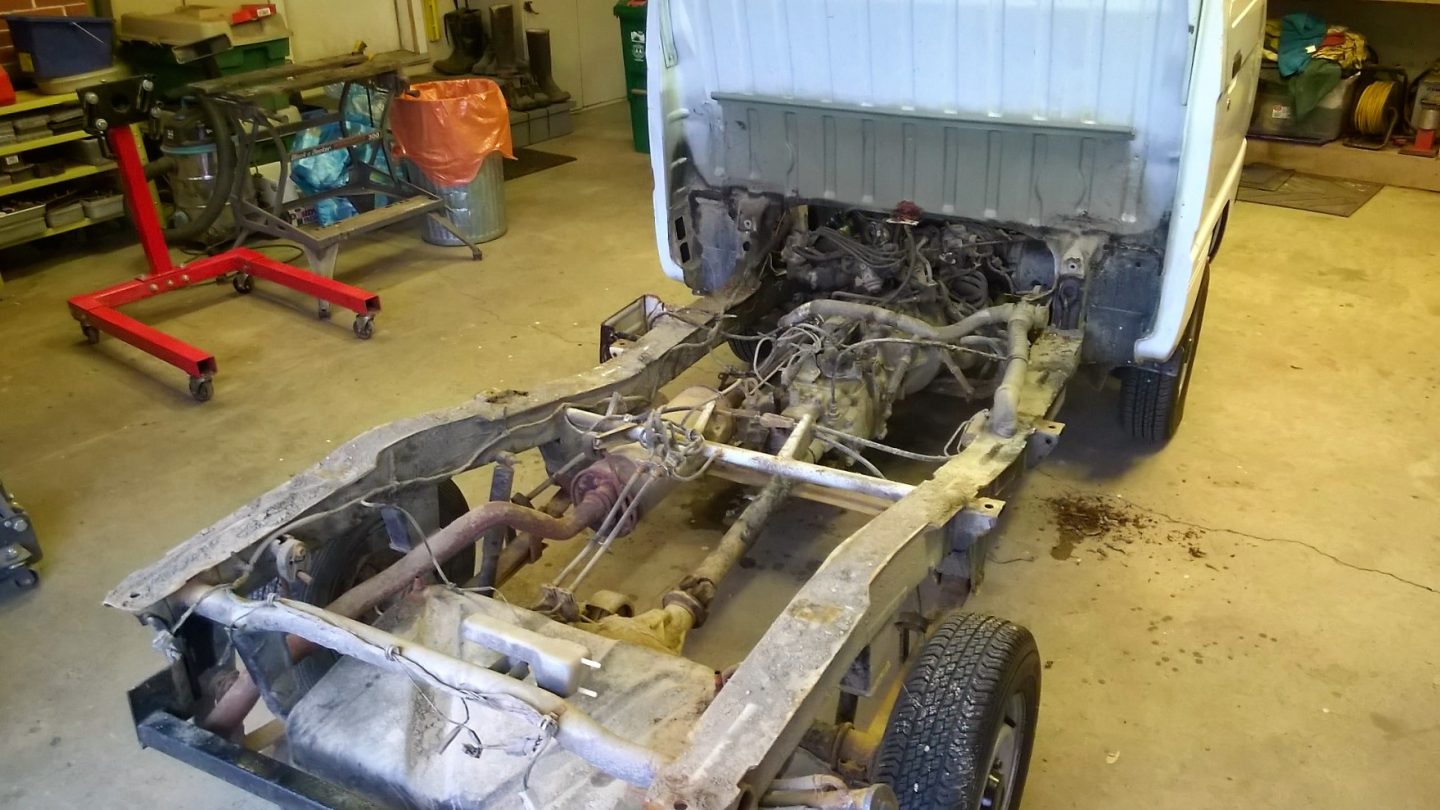 And that is just what I did..  Look at how easy it is to get at stuff..  Plus I want to clean the dirt and the rusty bits while I can..  even throw some paint on the frame. 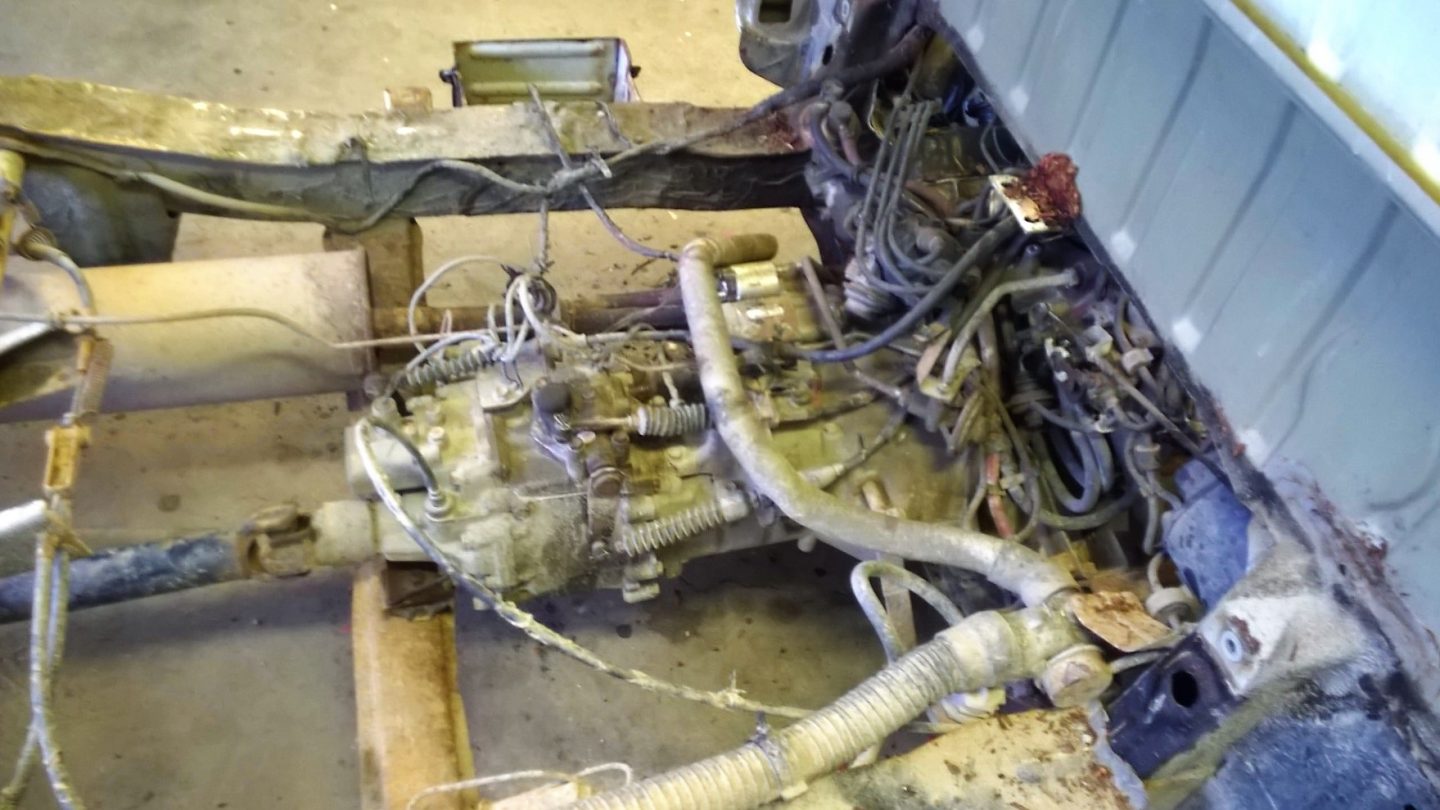 Even though the truck is simple compared to newer vehicles.. there is a rats nest of lines to deal with..   Next step is to give this mess a bath.. And some short videos too.

I’m not the fastest mechanic by any means..  so I expect the truck to be out of commission for a least two weeks.  I have other things to do.

All the bits are here now.  The new 13″ alloy rims, the gasket set for the motor.  The power keyless locking system, The stereo too.  So I’m not waiting for anything..   Right now the transmission is out on the floor.. and the motor is coming out in a day or so.  I’ve also been thinking about some painting.  My logo will be on the truck..  and I would like to improve the look.  And be unique !  So I’ve come up the idea of following the Kubota color scheme.  Orange and grey.   I’m leaving the cab mostly white..  But I’m painting the frame and it’s parts grey.  Then running an orange stripe down the side .. which includes the lower part of the box.  Here’s a mock up of the idea. 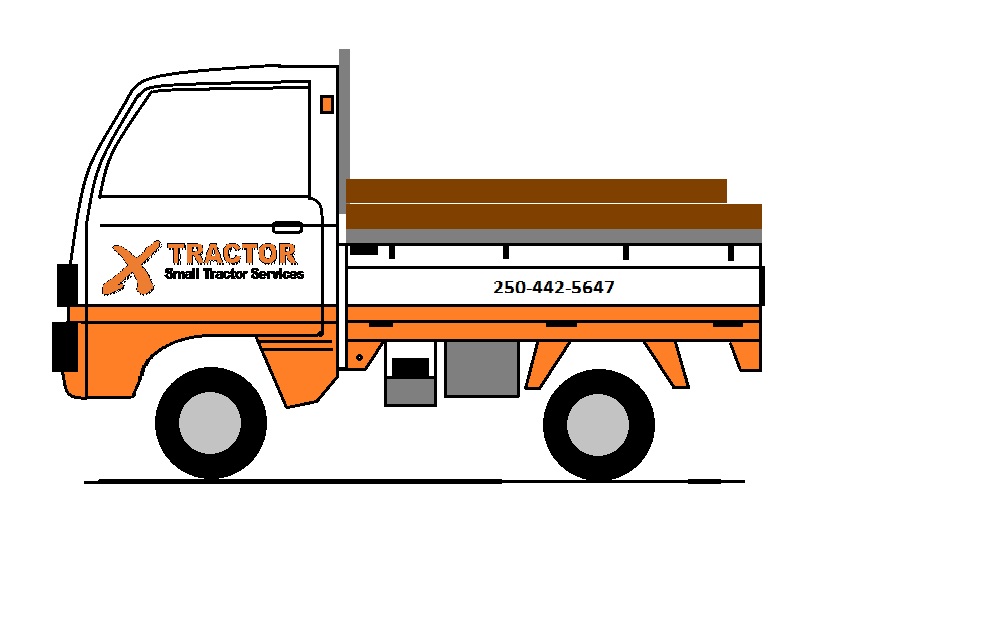 I haven’t drawn the frame in the picture .. but it’s the general idea.  I also included some wood side boards.  I would like to do that too.  So add to all this the nice new rims.. and we are stylin !

I’m thinking the motor work should be on a new page.