It’s February… Late February..  And the Carb kit is here ! 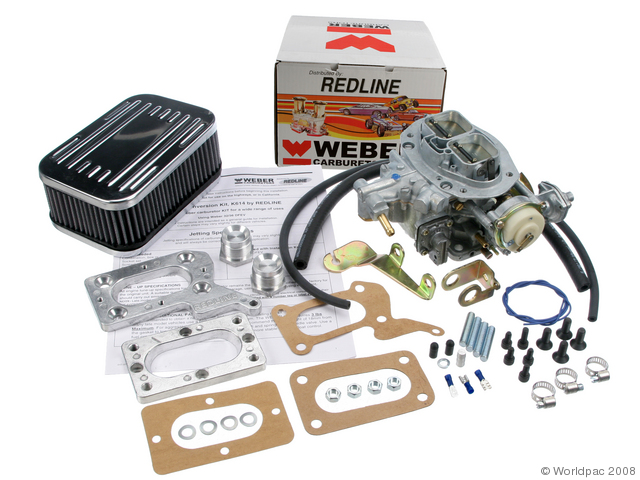 And this is what I got..  A conversion kit.  I would not say complete, because it’s not..  I’ve had to make some bits and buy some bits.  So I made room in the shop for the Raider to sneak in..   And set to work removing all the crap that the Mikuni carb needed to work..  All the vacuum lines and electric sensors… gone. 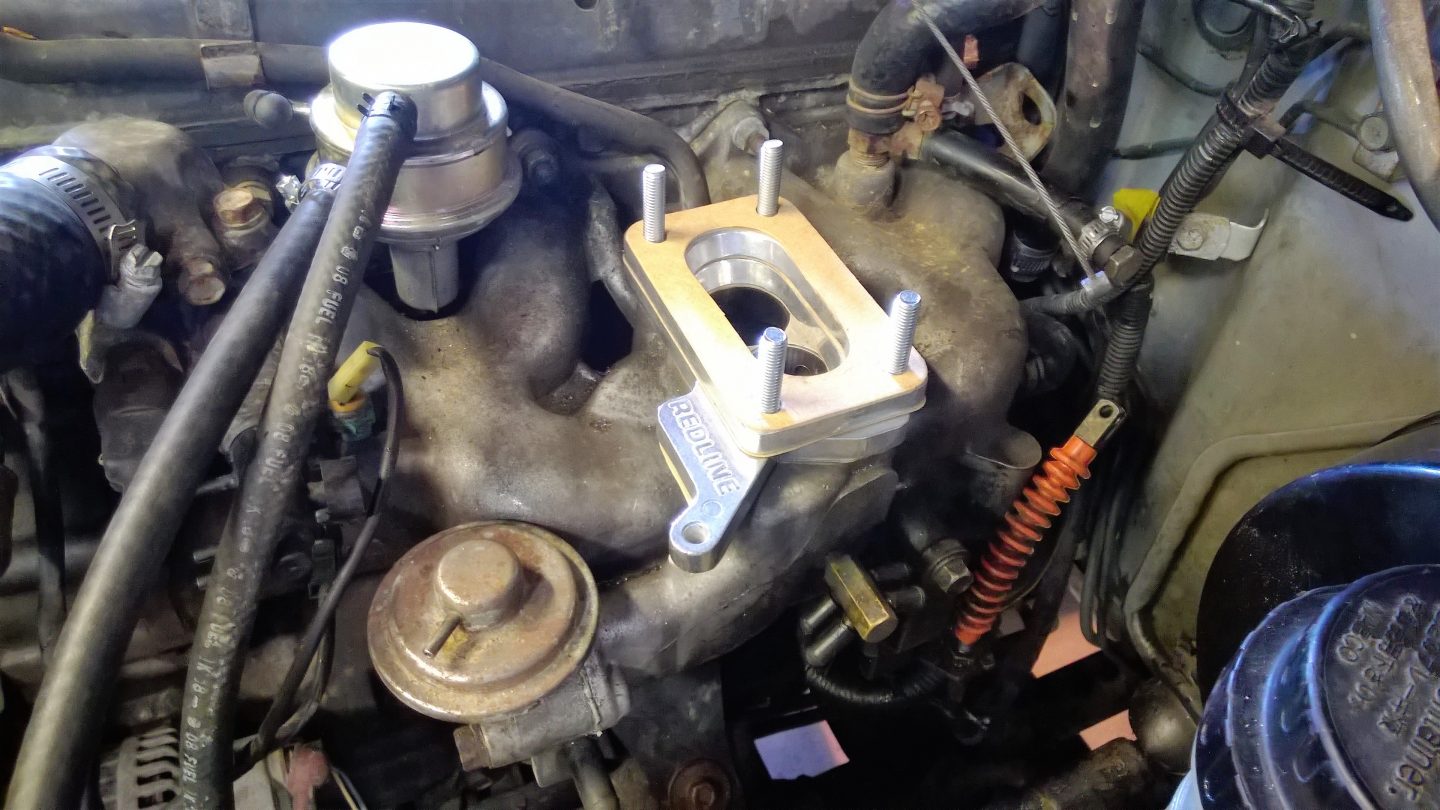 This is after I installed the adapter plates for the Weber.   And that was after I plugged some holes.  The old carb had coolant flowing through..  so I had to plug those off.   I got nice little nipples to plug the vacuum manifold.   And I needed to deal with the return vent line from the fuel tank.  I bought a new fuel filter that had the place for that vent line so problem solved.   But there’s more things to figure out.   Despite being told this kit worked for the auto transmission..  there was no way to hook up the kick down cable to the throttle.  I had to invent something .. 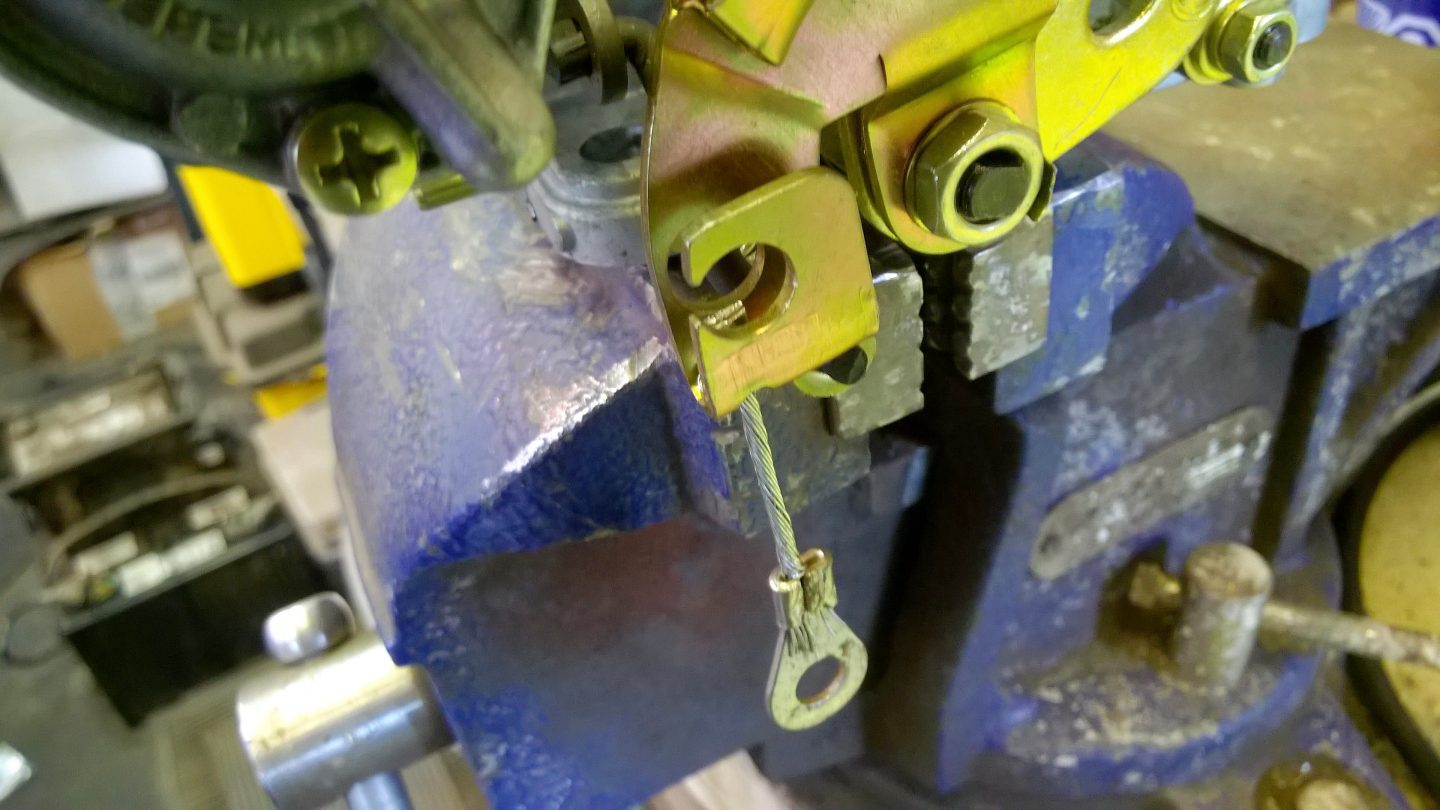 A bicycle brake cable with a crimp on terminal..  hey it works!   Took me an hour to figure it out..  But I was determined. 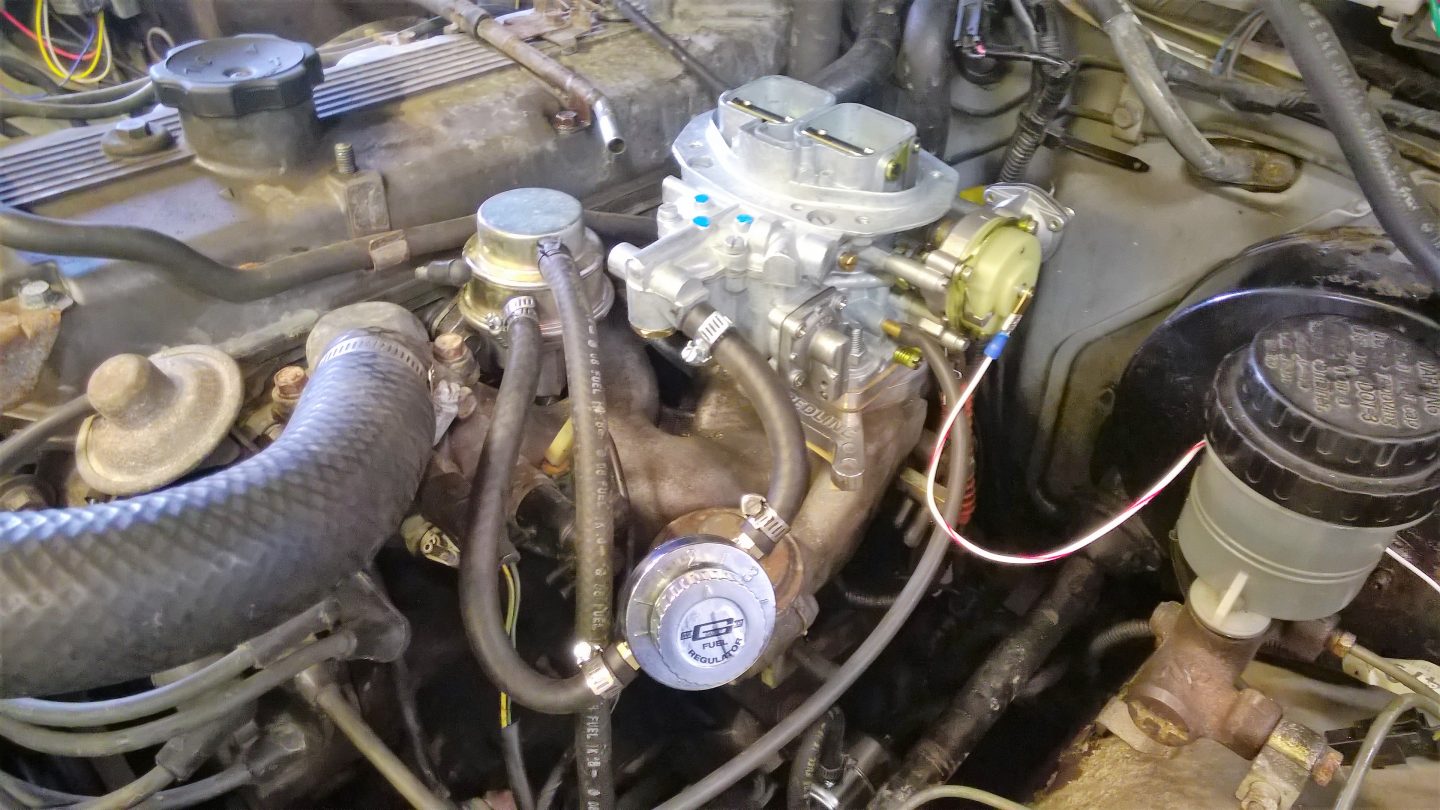 So here’s how it all looks .. that round thingy is a fuel pressure regulator..  adjustable too.   The instructions don’t say much ..but they did say that  fuel pressure needs to be 2.5 psi..  so that is the solution.   One power wire to the choke  and we are off and running…

WOW..  I can’t believe the power now..   That old carb was a dog.   The Raider is zippy..  and the shifts are good too..  initially the idle was too high. The spring was having trouble pulling the throttle back..  so I tweaked the cables  a bit and got that to work.  The motor idles at 800 rpm like it should now..  So back into the shop to tidy things up and check it all over. 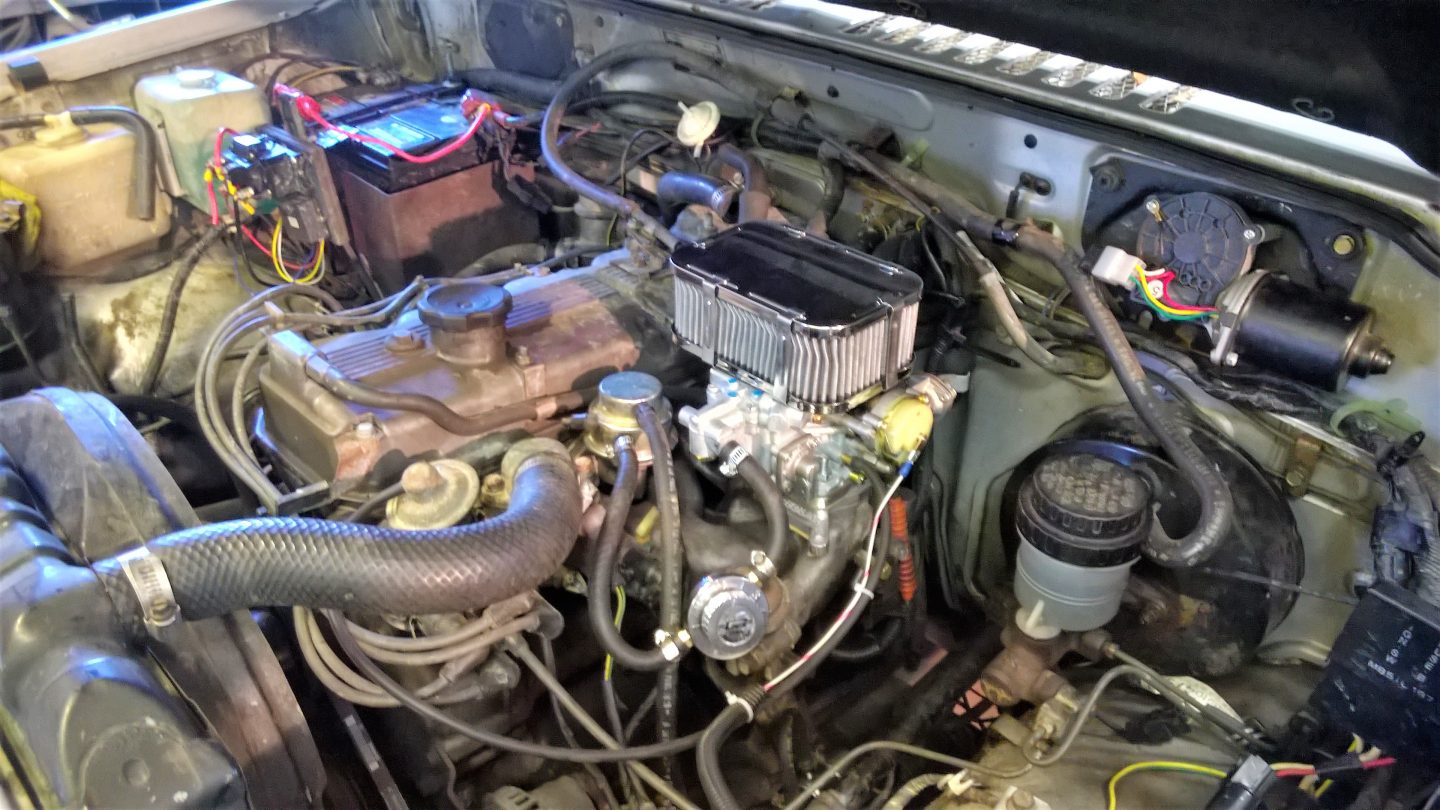 And that is where we are at..  Here’s  the finished install.   I fixed a few other things while the Raider was warm and dry..   The wipers would never park properly. .  So I pulled the motor out and repositioned the drive arm..  fixed !    I also installed the day time running lights that I’ve had for a bit..  last fall I wired the switch up and now we have lights too. 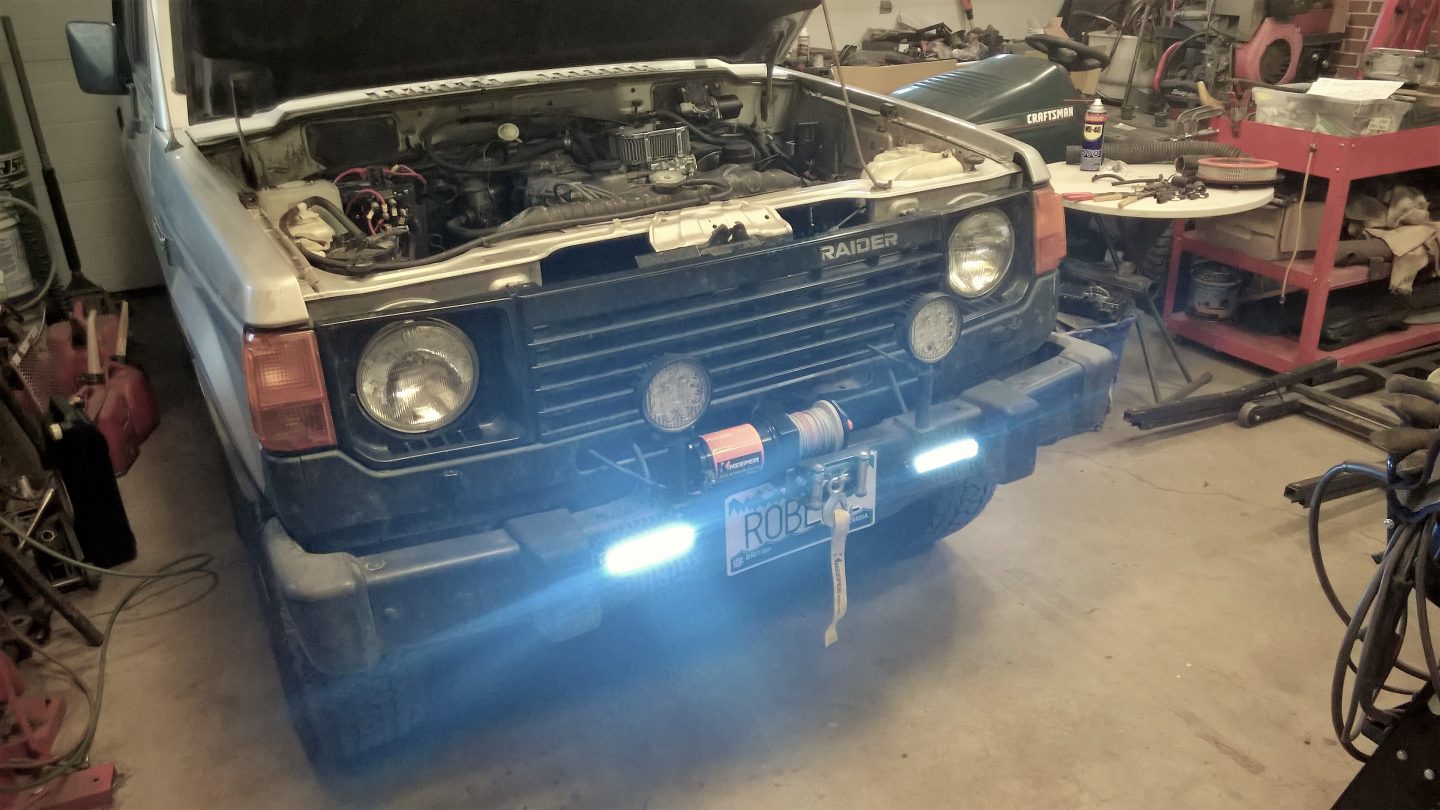 AND.. I made a video of the whole thing…

Time for a new page…